A good gang of 16 turned out to lay more track today, no doubt drawn in by the prospect of a hot meal of sausage, chips and a vast quantity of baked beans cooked by Jim back at Winchcombe. All this washed down by strong tea, and a generous supply of Mrs. B's excellent almond and cherry sponge cake.

By the description of the lunch in pride of place on the blog, you will no doubt realise what it was that counted today. But BTW, we also laid some track... Well, an army does march on its stomach. A Frenchman may have said it, but it's true. We were happy campers, once fed. 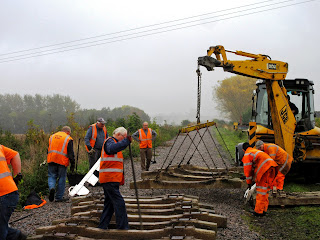 The start of the day was very misty, so you couldn't even see the target. Broadway goods shed is shrouded in low clouds. The first new set of concrete sleepers is lifted in. 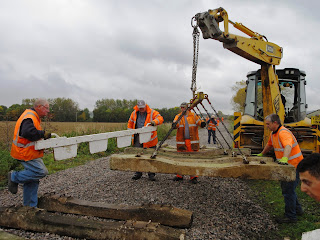 When you lift them off the pile or off the ground, they jangle around a lot (a ganger thought that if they ring clear, like a bell, then they must be sound) so we fit these white spacers to calm things down a bit.

Once the load has stabilised, Steve gets instructions like 'Malvern', or 'Toddy', and sometimes even 'Broadway'. Left and right to you and me, but it does depend on which way you are facing, hence the geographical terms used.. 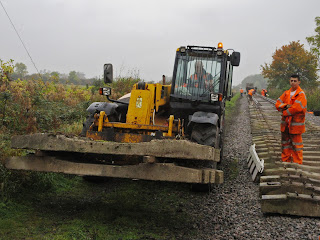 Then there's a shout of ' INCOMING'  and you better get out of the way PDQ, because here's Alan with another load of eight.
Saturday we were very well coordinated, because both JCB and Telehandler were there, so one lifts in, while the other goes and fetches more. We are a well oiled machine.

120 sleepers were lifted in today, taking us well over the Worcesterhire county boundary. We also came to the end of the SHC equipped concrete sleepers, and started on our supply of the more modern Pandrol type. Well, that's a milepost only for the initiated. 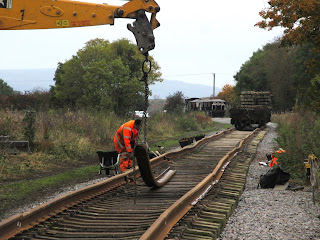 Once the sleepers were down, we dragged up 8 rails to lift in and make 4 track panels, which gives us an 80 yard advance. This picture shows how flexible a rail can be, if you lift up one end. This in answer to a comment enquiring after a picture. They're quite floppy really, even though they are of a heavy duty standard. 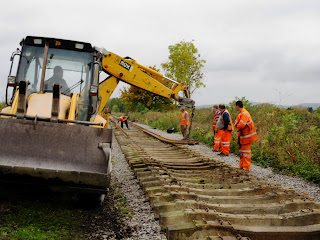 The rail slips along quite easily along the tops of the sleepers.

Arrived at its destination, it is lifted into place and 'encouraged' into the seats on the sleepers with a couple of crowbars.

Laying the rails is really the easiest of the tasks; placing the sleepers on the other hand is quite slow as they have to be inched around with crowbars until they all exactly line up. Despite the JCB, manual labour still has to finish the job at the end. 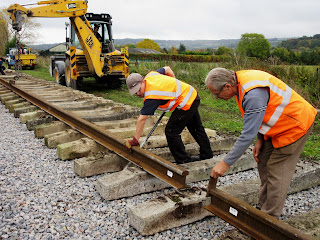 When the new rail has successfully bedded down, it has to be pushed up against the previous rail.

A small gap is left, and we have found that one of the SHC clips makes a perfect gauge for the distance. Next week this gap will be welded shut.

Here the JCB gives the new rail a little nudge - ''12 inches to go''. A voice wants to know if those inches are metric? They probably are, but after Brexit.... our time will come. 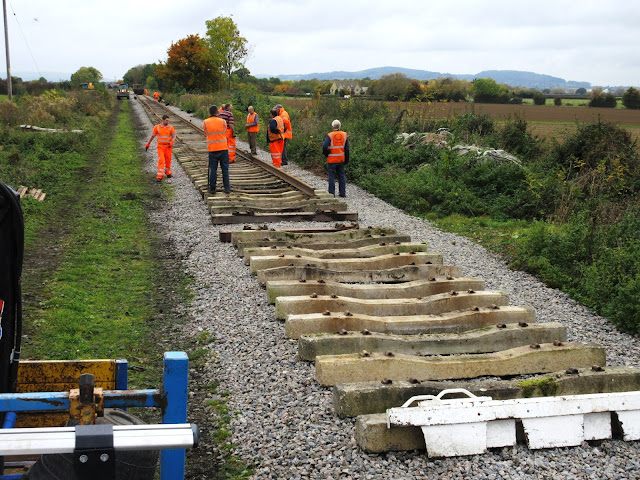 Towards the end of the session, this picture shows how far the the railhead has advanced. It's quite a long straight line from Little Buckland curve now, you can barely see it in the distance. The initiated will see that the nearest few sleepers are now of the Pandrol type. The gang await the JCB with the last rail before a retreat to Winchcombe for lunch. 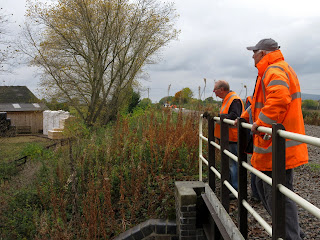 Peasebrook Farm underbridge! It's just a short walk now. Two members of the gang have strolled up to our target and enjoy the view. This was one of the 5 'Bridges to Broadway' that were refurbished, with, inter alia, brand new handrails and pointing of wing walls seen in this picture. 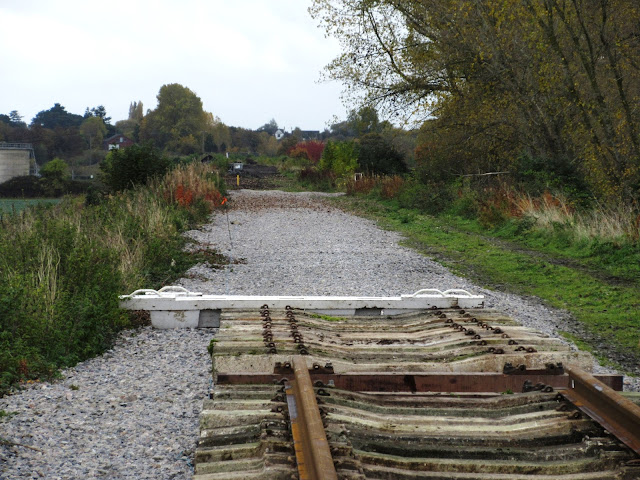 The last shot of the day, showing Saturday's railhead and Peasebrook Farm bridge with the end of the currently ballasted section now much nearer. Broadway goods shed is hiding in the trees on the left. Don't be fooled by the compression though, that is still a long walk away. 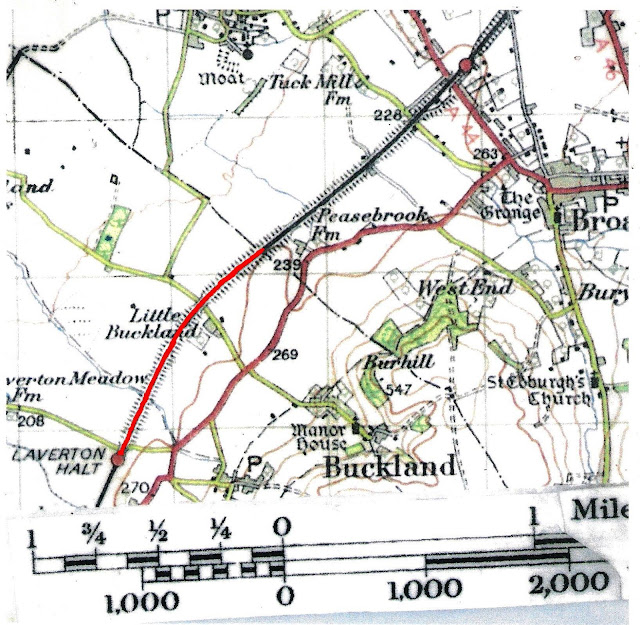 Here's a birdseye view of the railhead on a map, updated as per Saturday. The red line shows the track laid so far, not forgetting the removal of the Laverton loop as well. Starting from Laverton, we are just under half way to Broadway Springfield Lane. Our current property boundary is at the top of the map. 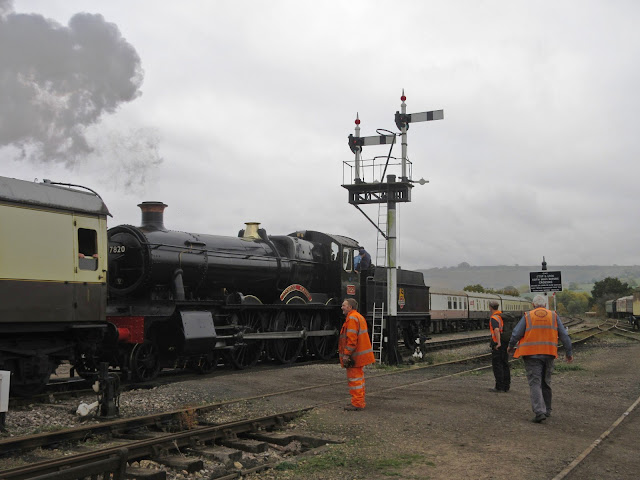 One of the pleasures of working on the railway is the privilege of being able to see the running of trains at close hand. It's always a thrill to see a big loco rumble by, especially if the train is filled with happy, fare paying passengers (as it was yesterday). Here the gang is walking back through Winchcombe yard, tired, but with a hot lunch just a few more yards away. 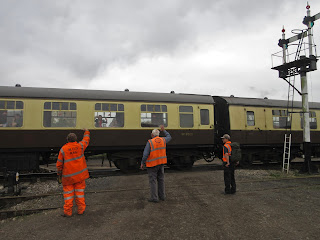 We play our part of course - who can resist waving back at the happy children on a 'Steam and Scream'? There seemed to be some at every window. Do they stop in the tunnel and turn the lights off? That should get them going.

The tamper is now on its way. As you read this, is should already have arrived, and it will start work on tamping the extension, starting at Laverton loop as was. During the week it will work its way northwards as far as it can, in readiness for stressing the rail. The Dogfish have also been reloaded for another ballast drop.

Within the next couple of weeks work will start on preparing a ballast delivery area at Broadway, and then the ballasting of the trackbed back south to Peasebrook Farm bridge can commence. There are still a few odd jobs in between though, so schedules may vary (the usual disclaimer may apply)

The production run at the foundry casting the replica GWR lamp posts has now stabilised, and we are seeing arrivals at a rate of 3 a week at the moment. 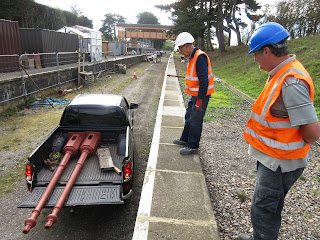 Here Keith and Dave ponder the weight of the next two posts to be unloaded. In fact it can be done with 3 men, and we now know the tricks. 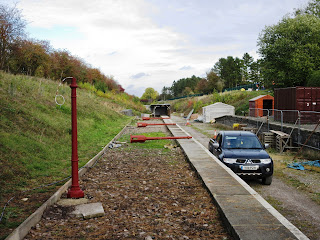 Shortly after, the next lot of three were ready for planting. In the picture, they look rather like the guns of HMS Victory!

These posts have now also been planted, and this completes the sponsored replica GWR lamp post scheme. Platform 2 is now fully equipped. All 10 have been successfully funded, manufactured and delivered. It's been a great achievement and a real boost to the authenticity of the atmosphere here. We are very grateful to the sponsor of the pattern which triggered the initiative, and to the 10 sponsors of the posts.

The tops will go on later, so that they are fresher nearer the opening. Platform 1 is on hold, as it is obstructed by several containers, although the 4 southernmost ones have been fitted.