Laying of track has not started yet, but some more preparatory work has been undertaken, so time for a little update on the project. 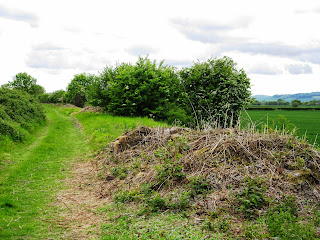 You're probably wondering why there has been a delay to the start of track laying. Weren't we going to start, once the running season had relaunched? We were, but unexpected news came that there were lizards on site. As we have to adhere to the Countryside Laws, we commissioned a professional survey, which reported the presence of lizards in this pile of former horse gallop material, and others. I must say, I have walked this trackbed a few times now, and never saw any of these, but no doubt they are in there somewhere. (I have seen hundreds along railway lines in France, they love the warm stone ballast).
The lizards are due to be removed in May and and June, and then clearance can get on with the rest of the job (only a few 100yds are concerned).
Above is the view from just south of Bridge 5 (Little Buckland) showing the area affected. 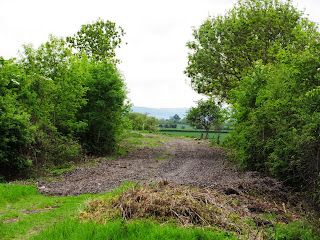 This photograph looking south shows the end of the affected area, and the  limit of clearance today. We are in the curve between the Laverton Straight and bridge 5. Just a few steps further you can see a PWay train loaded with sleepers, ready to go! 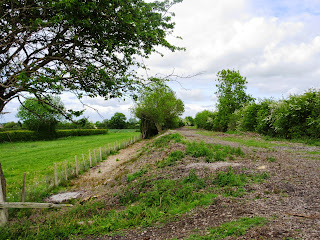 This photograph looking north was taken looking in the opposite direction and shows a recently cleared area leading into the curve. All very neat and tidy. 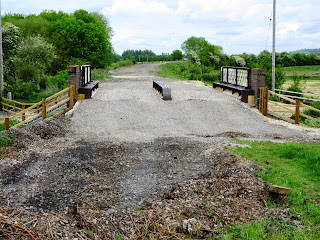 Back at Bridge 5, a view looking north shows where a contractor has recently installed ballast retention walls to the left and right. The void in the middle, resulting from the deep excavation behind the abutments, has been further filled with ballast to give a level trackbed.
Beyond, the curve continues towards Peasebrook farm. 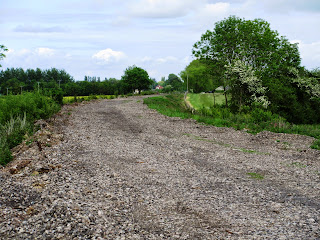 Further round this curve, the contractor has cleaned and leveled the (double) trackbed.

If you look carefully, you can see a little red dot in the distance. That is the former Broadway goods shed, now maintained by the Caravan Club. Not so far then! But the first track lay will be to put down the 800m of new rail we have in store. That will take us to little Buckland bridge, just behind the camera. We have sufficient concrete sleepers in store as well, but will have to put our hands in our pockets to buy the necessary ballast, at £20 a ton. 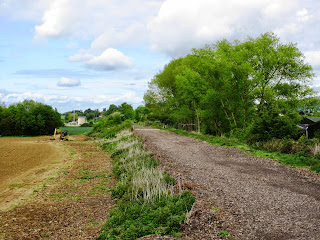 The clearance and trackbed grading have reached just beyond bridge 4, visible as a pale stripe across the trackbed in the distance. While the trackbed is almost at ground level here, beyond bridge 4 it runs along a substantial embankment all the way into Broadway itself. It's quite a structure.
Visible left of centre are the Broadway goods shed, the sewage farm at Pry lane (bridge 3) and a 360 working on the mouth of bridge 4. 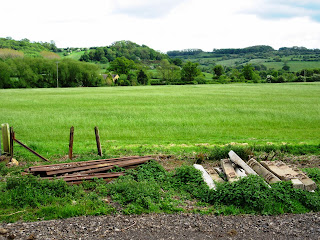 Turning right, a view up the valley leading to Buckland village, and its fabulous Buckland Manor hotel. Treat yourself to a luxury cream tea here; it's OK to just walk in. The contractor building the Honeybourne line in 1904 liked it so much that he bought it, and moved in !

So much for the news. The jungle telegraph suggests that there should be opportunity for a further update in the second half of June.