Another trainload of ballast

A second trainload of ballast was dropped on the Broadway extension today.

The class 73 pushed 6 Dogfish and a Shark brake further out along the extension, starting from the foot crossing at the beginning of the curve to Little Buckland, to a point approximately half way round it. 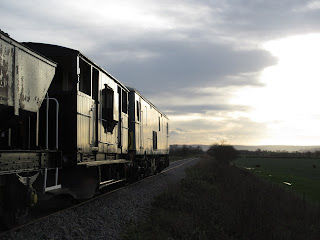 A small gang of 5 met at Laverton to shunt the PWay train, leaving the bogie bolsters in the loop.

The ballast train then reversed up the headshunt and on to the first ballasted section. It was a cold and dark afternoon, with temperatures barely above freezing.

Here the train has arrived on the previously ballasted section, ready to open the hopper doors. 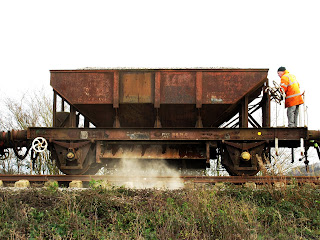 With the train still stationary, each centre door is opened, so allowing the fresh ballast to fall out until it is stopped by its own pile underneath.

The doors are notoriously stiff to operate. Only seconds earlier the same people were having a cultured discussion in the Shark about the preferred eating places in this part of the Cotswolds. Then the culture goes out of the window, and brute force comes in to play....

Here's a little clip of the train reversing up the new piece of track: https://youtu.be/TOgpdiQLe-0 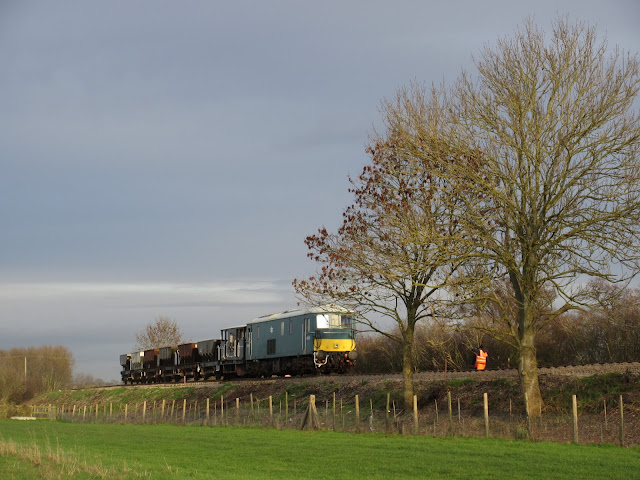 With all six centre doors open, the class 73 reverses at walking pace further up the extension. The ballast empties into the 4 foot, and the Shark plough pushes the excess outside on to the shoulders.
This is the first train ever on this new section. In the future you'd be able to take some fine evening pictures here, as there is a public footpath alongside here. 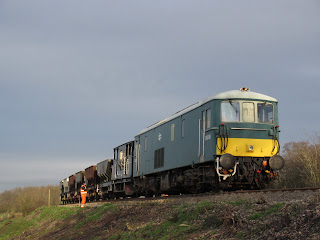 Sadly, 120 tons of ballast don't go very far, and the journey is soon over. We are only half way round the curve too - the end is by the pole in the distance, that's where Little Buckland bridge is (Bridge 5). The hopper doors are closed again, and a member of the gang pokes out any remaining ballast that might jam the closing process. 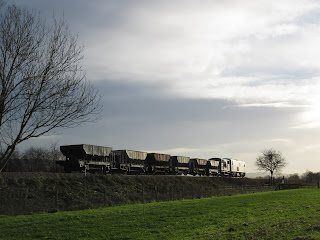 Pounds lighter, the empty train trundles back down to Laverton Loop, where the hoppers are re-attached to the bogie bolsters and parked. 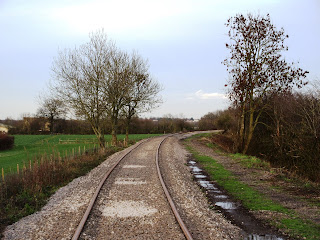 How did they do? Judge for yourself. This is the newly ballasted stretch, looking towards Broadway.

What next? Well, we're in the low season at the moment, and at the end of the financial year when money is tight. All the PWay efforts are currently directed at the Winchcombe ballast and sleeper replacement operation. It's urgent, as the closed season is short and the hired in tamper is back at the end of next month.

Once trains get up and running again, the PWay will start to dismantle Laverton Loop and turn it into heavyweight, plain track. The S&T dept has already taken out the ground frames, so changing the points wasn't so easy today. No levers, just a boot!
The materials from Laverton will, in the first instance, be stored in the area of the Broadway headshunt, by Springfield Lane bridge. Why not reinstall them straight away? Because for that you need funds, and this is the low season. All eyes are now on our Easter share issue - will we raise enough to get all the way there? It's going to have to be big - a track extension, the civils under the track, a new signal box and of course a new GWR station. All at once.

It's up to us all to play our part, for as much as we can afford. You can already register your interest, and they'll put you on the mailing list for the prospectus. Go for it ! We on the ground will make it happen.