Spring is upon us, and trains have started running again. The PWay dept. has completed the relay of the Toddington loop.
It's also Mothering Sunday - lunch at the Crown & Trumpet, preceded by an extension trackbed walk, was an acceptable compromise. So here is the latest state of play: 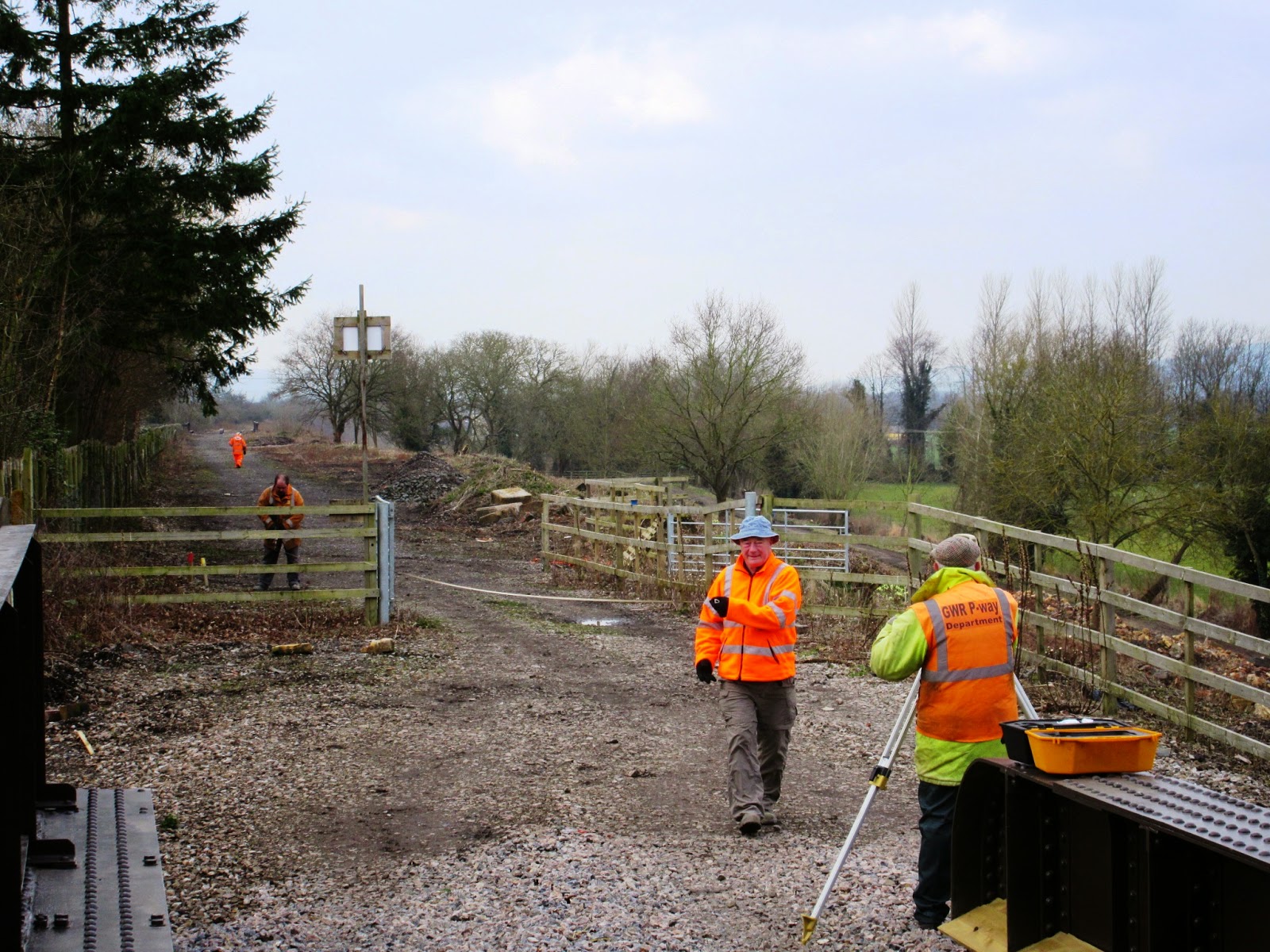 On Saturday a delegation from the PWay dept. came to Broadway to survey the trackbed between the two bridges. Marker posts were set up along the Malvern side of the track at 20m intervals. The purpose is to be able to survey the embankment here, determine where the track will run along it, and get a picture of the condition of the side of the embankment at 20m intervals down to the future car park field.
Using a theodolite a straight line was established between the two bridges, and then by means of a table the curve was set out at 20m intervals using stakes. 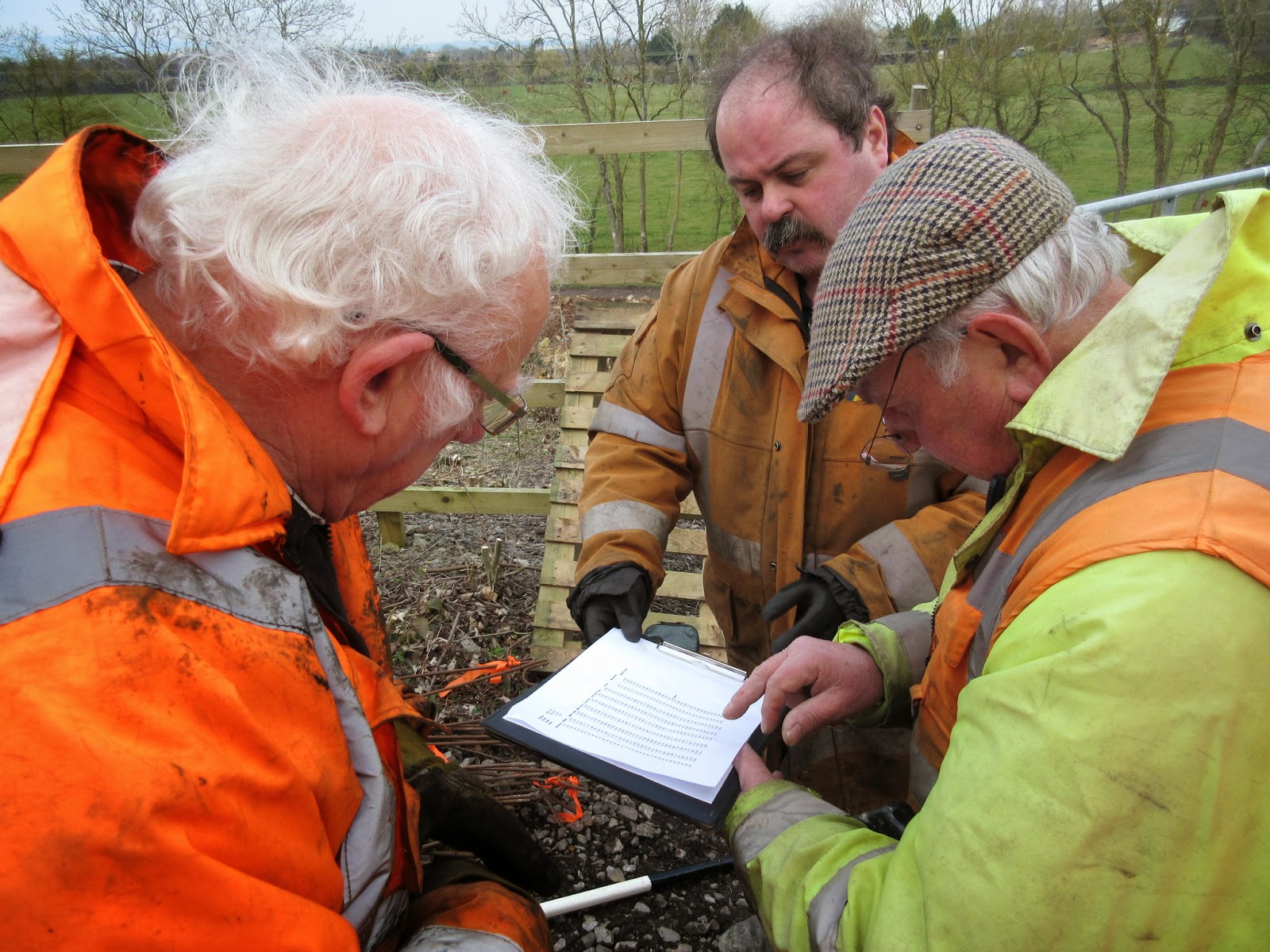 The team was well prepared with a table and a drawing, and here we see Nigel explaining the MO before starting out. 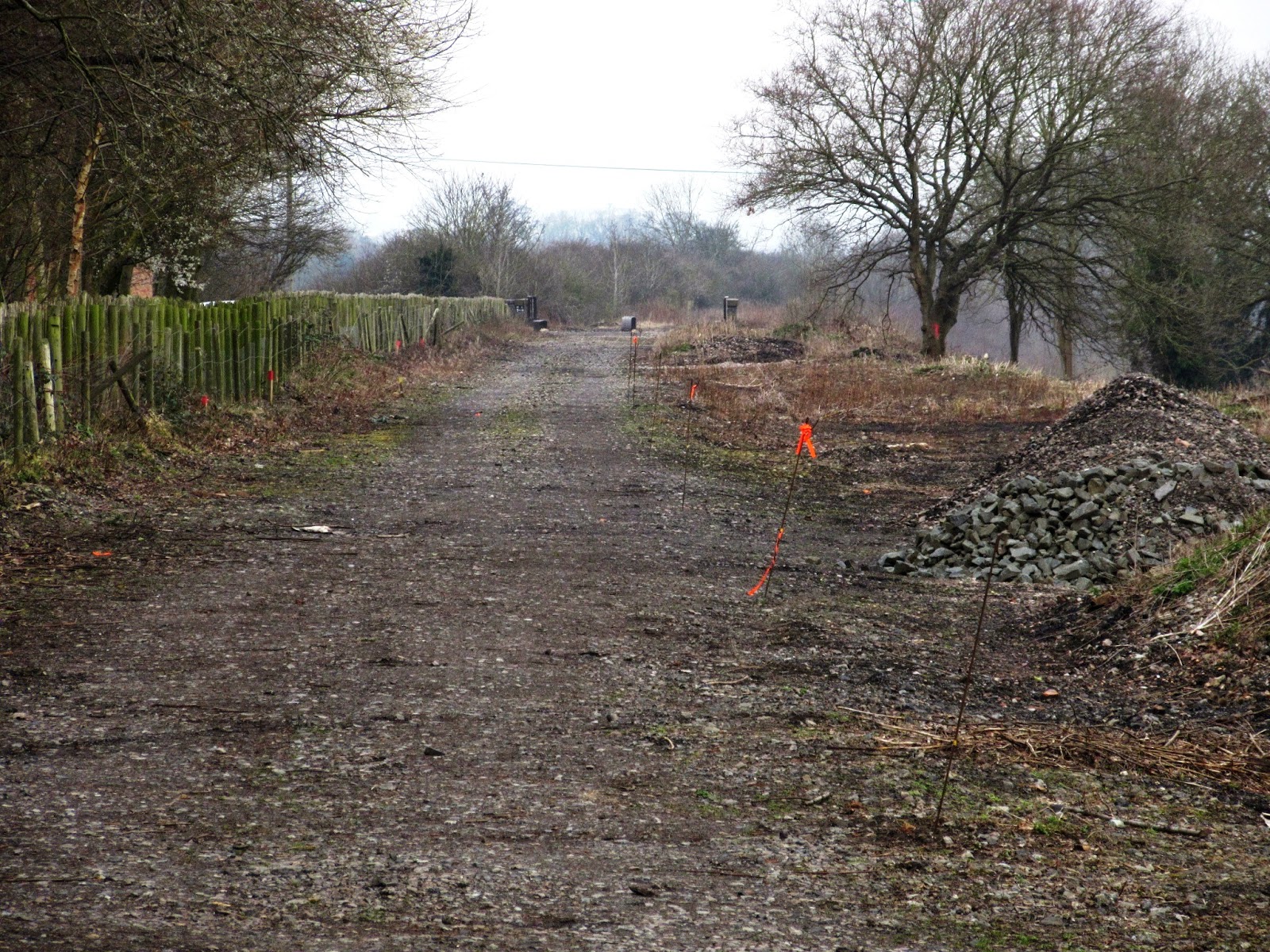 The stakes then went in quite quickly, seen here on the right. This area of trackbed once had 4 tracks - one to the left, behind the fence, to serve the goods shed, the two main line tracks down the middle, and a siding on the right. Over the years a lot of material has been pushed over the edge here, and it is of interest to know which part supported the main lines, which the siding, and what is just accidental widening because stuff was dumped here. A survey will show us what's what.

It was really great to see the PWay gang at Broadway, the first signs that something is starting to happen.
Time for a walk the 2 miles to Laverton then, to see how things are going. 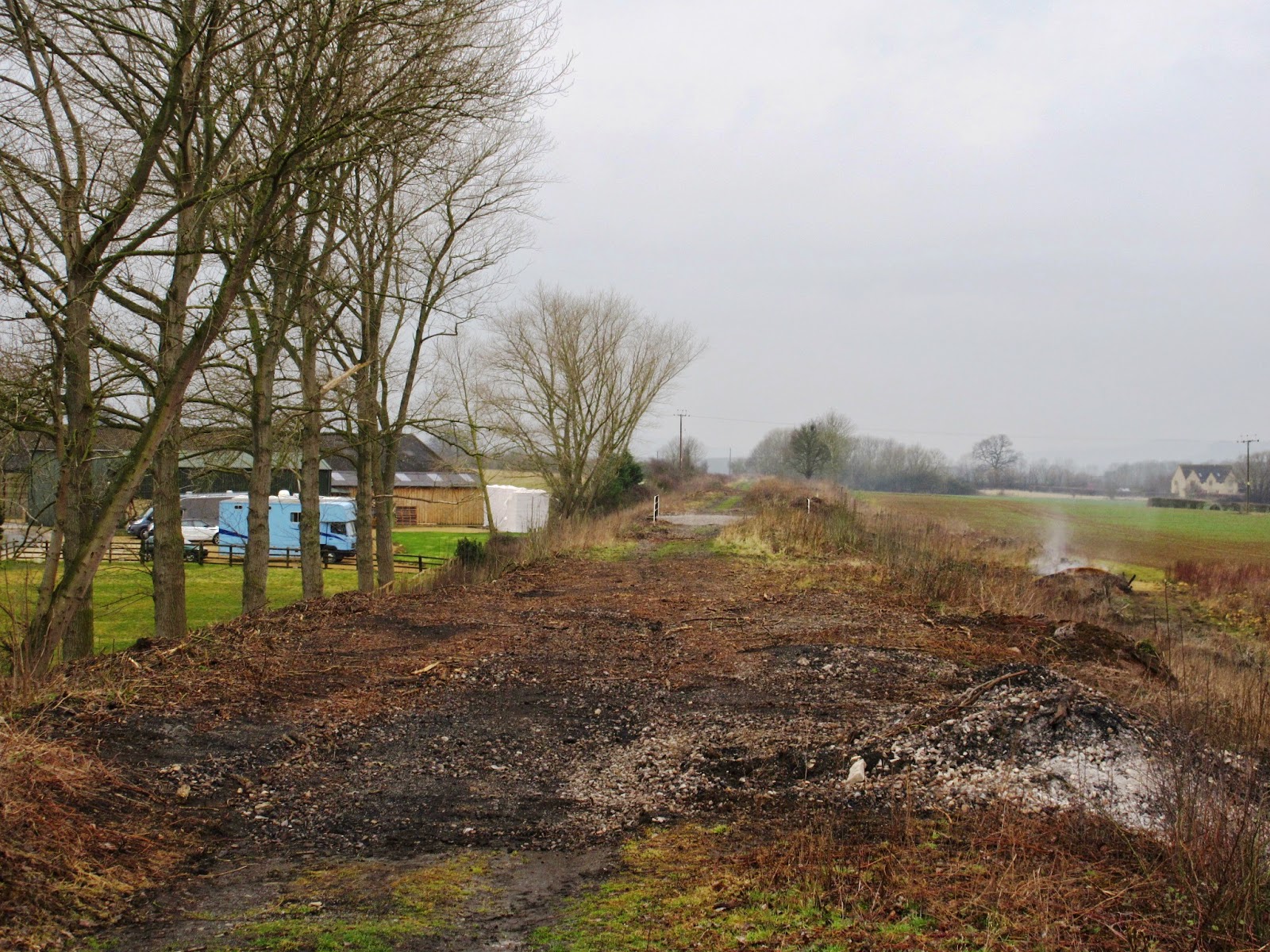 As far as Pry Lane the trackbed is relatively clear, and runs on a high embankment. Further south it is more overgrown, but with a good vehicular track down the middle. Arriving at Peasebrook Farm a large pile of brash has recently been dealt with, and from here onwards to Little Buckland bridge the trackbed is pretty much clear now. The light patch in the middle distance is the recently reconstructed Peasebrook Farm bridge (No. 4). This area will see the second 800m laid.

Andy P's drainage team has also been along, marking out the sites of drains under the embankment, and clearing pathways down for remedial action. Very efficient. 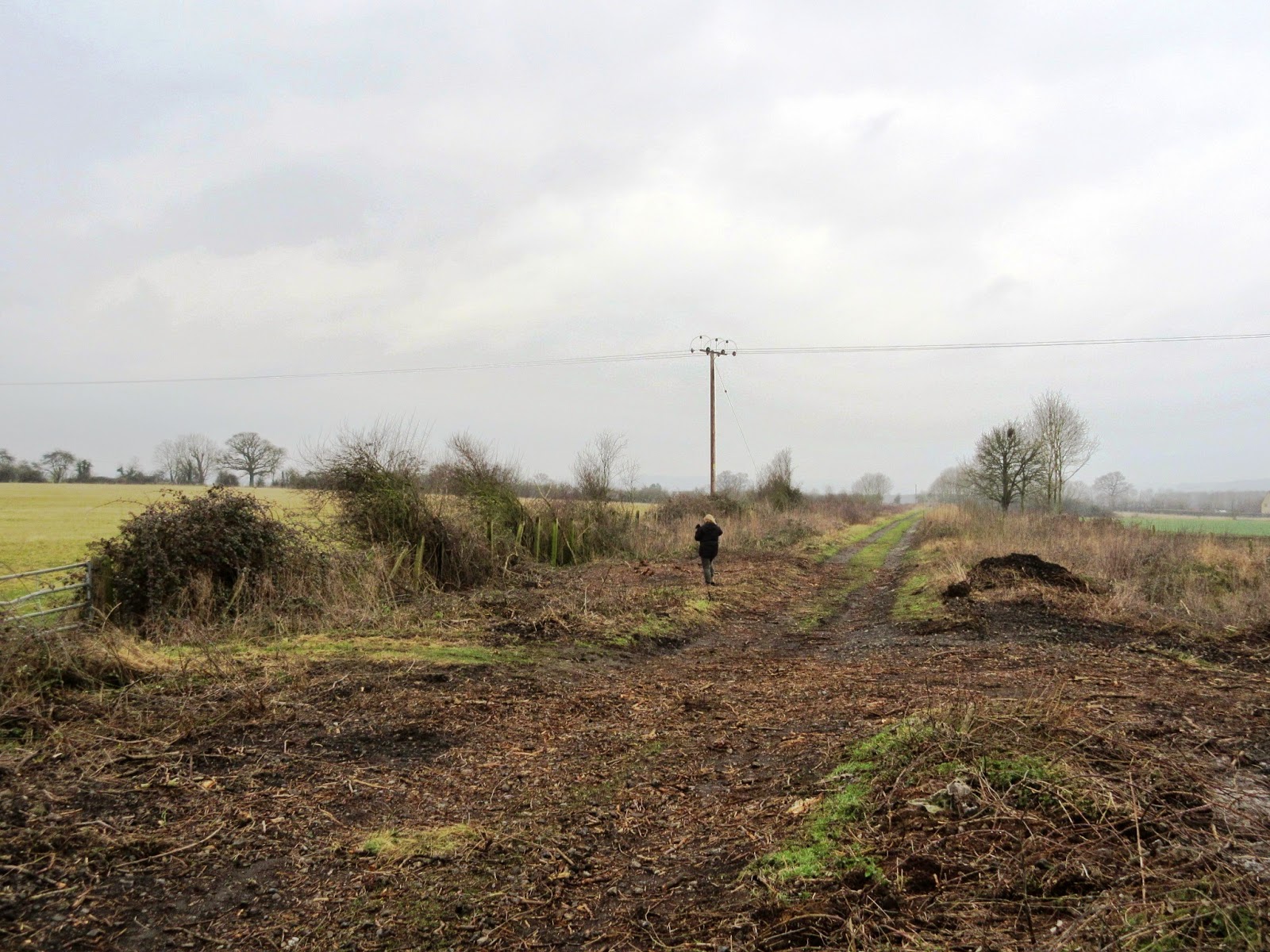 In this picture, taken between Peasebrook farm and Little Buckland bridge (No.5) you can see that the flail has been active here. This area was originally cleared by a contractor, but bramble and Ash tree shoots soon come up again. 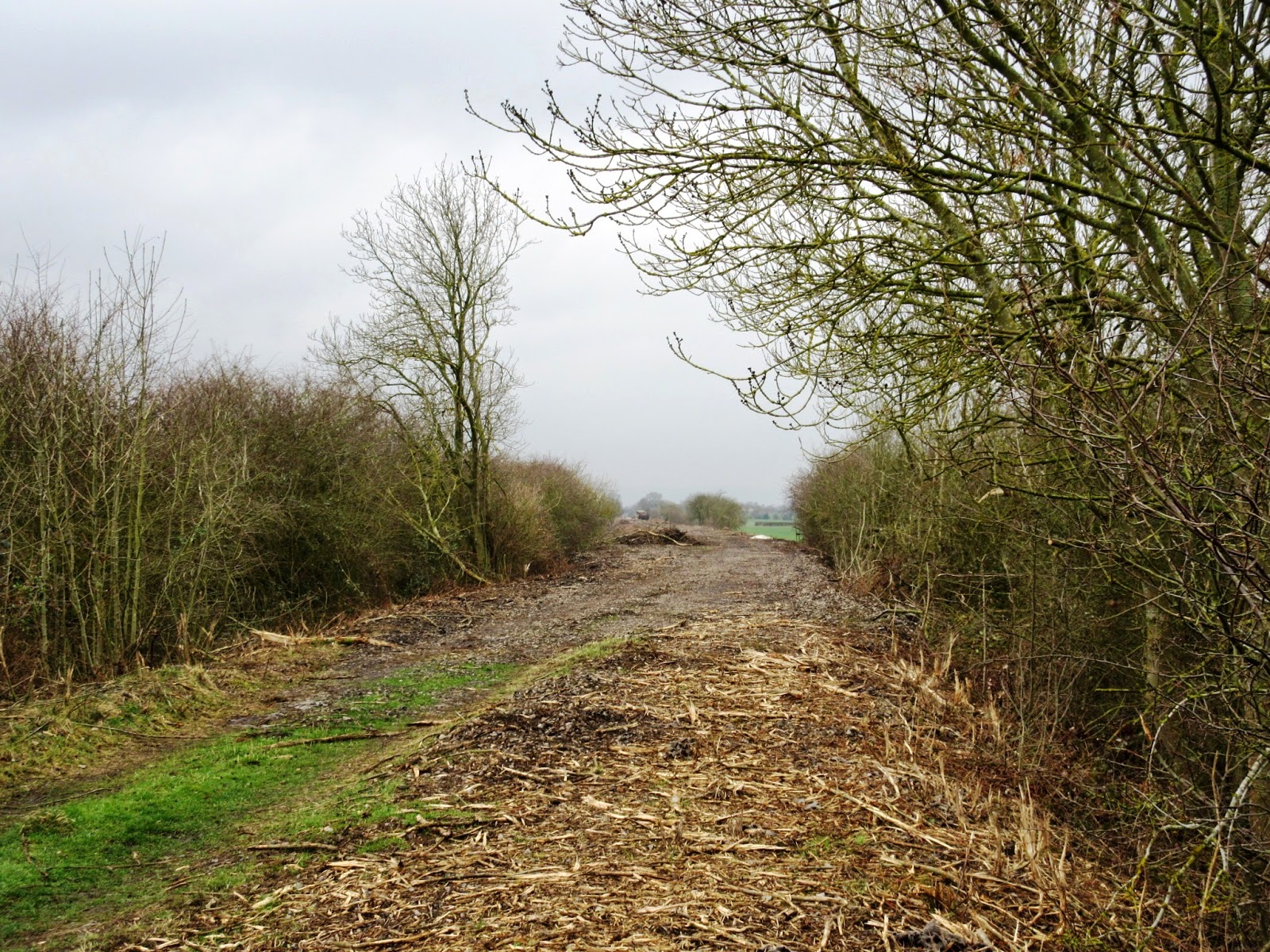 Further south, beyond Little Buckland, there is a 300m patch of older undergrowth which has not yet been addressed. However, on the trackbed itself the flail has made a passage wide enough for track, with just the surface needing a final scrape. This area will see the first 800m of track laid. 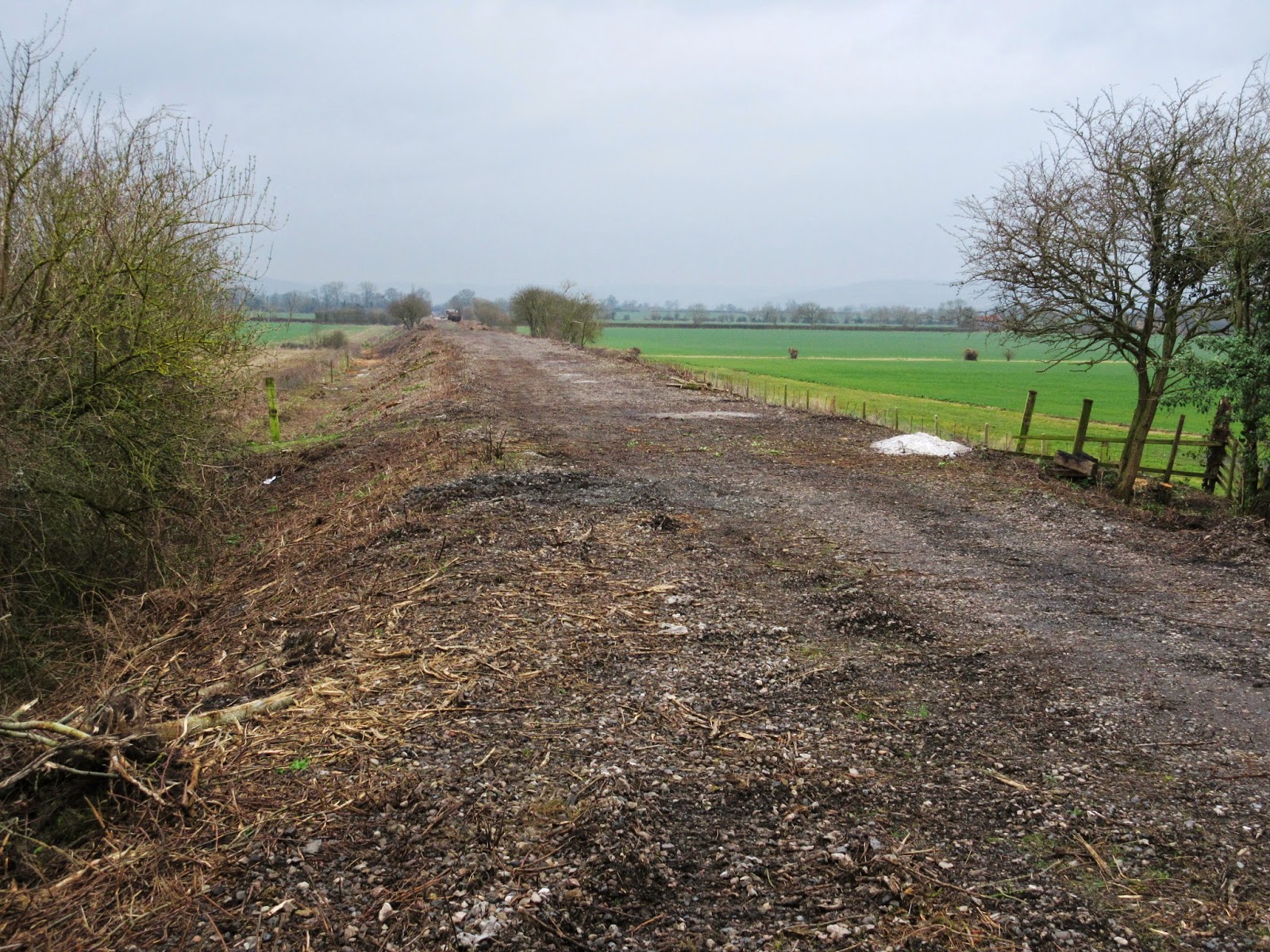 This final shot, round the curve from Little Buckland and looking towards Laverton, both side of the embankment and the trackbed are fully cleared. In the distance the PWay train can be seen standing just north of Laverton loop.

After the major relay of the entire Toddington station area we are taking a short break from maintenance during the non-running season. A lot of stuff is going on behind the scenes to get us ready for the big push. News of this will be posted as soon as it happens!