Two teams were working on the extension today, 4 teams of welders, and the Wednesday gang on the track extension. 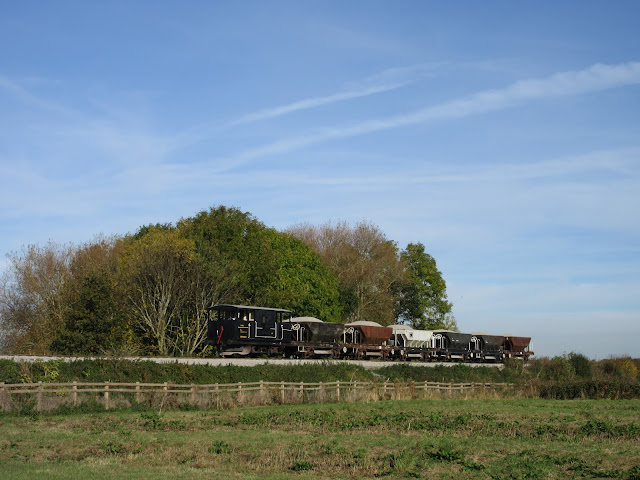 At Little Buckland, a well filled ballast train has been positioned, ready for dropping on Thursday. But first the track which it will ballast has to be welded, so the welders were back today in 4 teams. 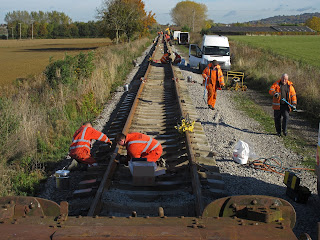 You can see them here, with their string of vans, strung out on the recently laid straight between Little Buckland and Peasebrook farm. The straight seems to stretch into the infinite distance; we've already laid quite a bit of track here. 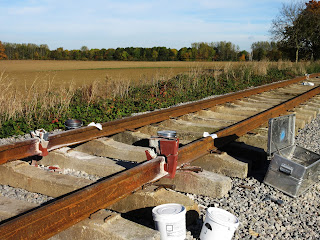 As these photographs were being taken, a number of welds had already been effected, but were still waiting to be finished off with the removal of the excess, and grinding down.

This is the area that will be ballasted tomorrow. 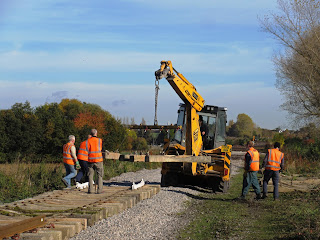 Further up the line we find a different group, here  laying track. This is the Wednesday gang of the PWay (there are two gangs, Wednesday and Saturday).

There were 80 sleepers remaining on the second of the two bogie flats, and today they were all laid, so that the wagons can be retrieved for loading again. One more load will finish the job to Peasebrook Farm bridge. 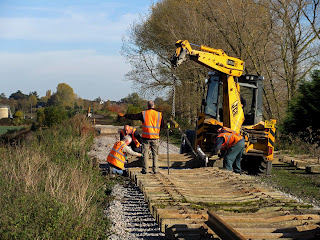 Here a group of 4 sleepers is being lifted into position.
A different technique here - Saturday's gang shout out the desired direction (Toddy, Malvern etc) whereas Wednesday's gang use hand signals. Take your pick.

In the near distance is the current track laying target, bridge 4. It's not far now. 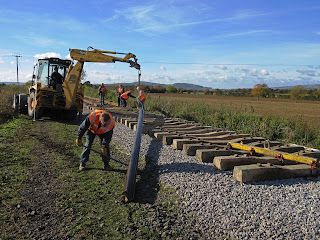 Rail was also dropped in, thus extending the actual rail head. Again you can see that the rail is quite bendy. We let the JCB take the strain, and then carefully manoeuvre it across and into its seats. 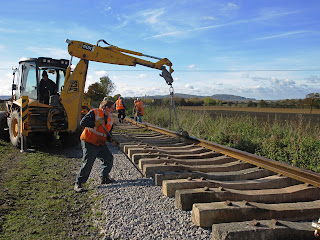 Of course it doesn't want to drop into all of the seats, there is always one guilty sleeper that is out of place, so it gets some attention with a crowbar, until the rail suddenly drops down the last inch.

The intention was to get the 80 sleepers down, and the rail to go with it. Here the first pair is being lifted in, but further supplies were blocked by the welders' vans at the time of the visit.

Frustrating news comes from the hired in tamper, which unfortunately broke down half way through the first day, still in the area of Laverton. It looks like serious gear box trouble, which isn't easily fixed. Options are being looked into, so it'll be a few days before we know more.