No news is - no news, so that's why it's been a bit quiet on the blog here.

We had hired in an 08 tamper, which did quite a good stretch from Laverton loop to the start of the Little Buckland curve, but then failed with very unattractive mechanical crunches. 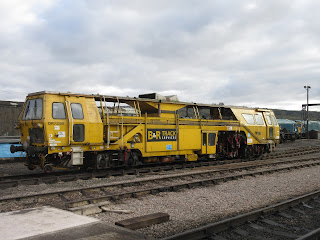 Here is the hired in tamper at rest in the loco yard at Toddington. With considerable difficulty the crew managed to extract the broken gearbox, which was the reason it failed. 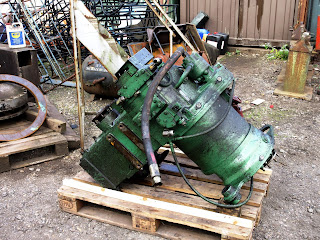 Here is the gearbox on a pallet, waiting for repair. We heard that teeth came out when the oil was drained (not our teeth, the gearbox teeth!) 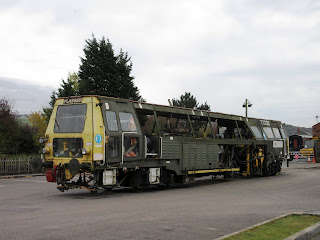 Finding another tamper at short notice is not easy and eventually a compromise solution was found, which is an older model 07 tamper, which while less capable, is immediately available. It arrived at Toddington a few days ago.

An 08 model will run up the track and measure it, and then tamp the result. The 07 can also tamp, but you have to do your own measuring, and tell it what to do afterwards. Slower, but you still get there in the end.


We lost a good week due to the breakdown, but at least the 08 made a start and the bit over Laverton bridge already looks quite good. However, the first tamp exposed a number of low areas. 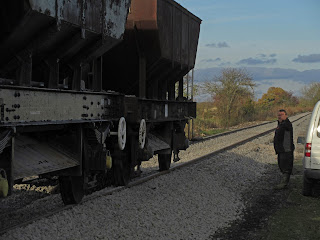 Earlier in the week a supplementary ballast drop was made, and a second additional drop was made today, between Laverton and the Little Buckland curve. Here the first wagon of ballast is about to start its drop. 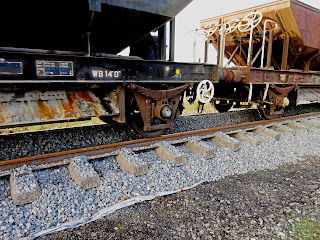 You can see that after the first tamp, the sleeper ends have become exposed due to the extra height.

Some of this is due to the 'hump' over Laverton bridge. Those who have been taking notes will recall that this bridge was temporarily removed many years ago, and when replaced by the third party involved, the bed of the track was raised as the new beams were made of concrete, rather than the original steel deck. This gives a hump here now, which the tamping will soften on each side. 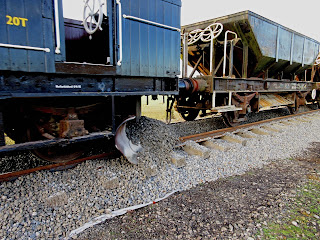 In this picture you can see the difference before and after the drop. On the right under the first wagon the sleeper ends are showing, while on the left the plough of the 'SHARK' is scooping the drop from the four foot out and on to the sleeper ends. Much better.

This drop has temporarily exhausted our ballast supply (more is coming on Tuesday) so the almost empty supply train was pushed right up against the rail head at Peasebrook Farm. 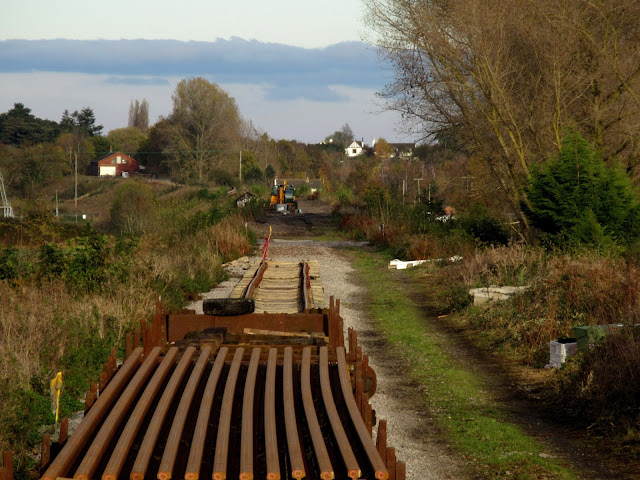 This picture was taken just before the wagons reached the end of the line. The rail on the wagon will get us to the end of the ballast bed at Peasebrook farm bridge. We still need to lay the last few yards of this; another load of 300 sleepers is currently being sorted out at Gotherington. 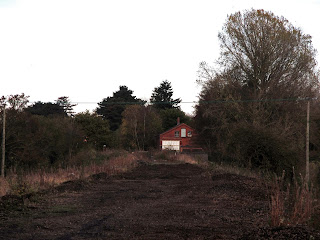 Steve the contractor has not sat still and has cleared the trackbed all the way to the Childswickham Road bridge. This picture was taken from Pry Lane and zoomed in.

The days are drawing in now, and photography like this is getting difficult in the low light - it wasn't even 3 o'clock when this picture was taken. 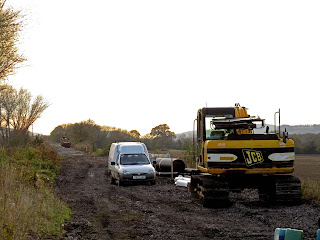 In the last remaining light of the day, Steve and Dan were working on drainage beyond Peasebrook Farm.

A 360 has been hired in for the heavier work, including preparation of the Broadway 'car park' ballast storage area. 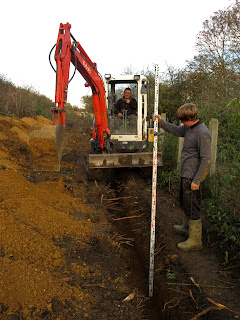 At the foot of the embankment here, Steve and Dan are running a new drainage ditch, to connect a farmer's field with the culvert behind the camera.

It requires a lot of skill to get the slope of the drain just right, as the terrain goes up and down, and the source of the water in the neighbour's field is behind a hump, so actually quite low down. Water needs to flow downhill after all.

Tamping should start again shortly, and we will keep you informed when it does.

As this blog is read by quite a few people - 30.000 visits a month at the moment - we would like to appeal to you to help us win a £25.000 grant by nominating the GWSR New Visitor centre. How to do this is explained below:

The Railway is looking for a £25,000 grant towards the estimated £75,000 cost of fitting out and furnishing the new Visitor Centre so please help us get a step closer to winning one of the grants by registering and then voting on at https://community-fund.aviva.co.uk/voting/project/view/16-937
Voting will close on 18th November 2017 with the winners being announced on the 10th January 2017.

Your vote can make a difference for us!
As my young son once said: 'Some's not much, but lots of somes.....'


Finally, we need to clear the trackbed at Broadway north, and among the items in temporary storage there are two cap stones for bridge pilasters. 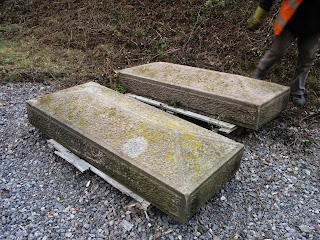 They are from the Mythe bridges at Tewkesbury, and too big for the pilasters on our line. They measure 5ft x 2ft, and one is inscribed ' Recst. 1910', so they are quite attractive.

We would be happy to cede them to another railway for a small donation, otherwise they may be offered to a reclamation centre.

Note also that at Broadway we are looking for about 100m of granite kerb stones (or parts thereof, we have 20m in store). They are a classic 12ins x 6 ins in size, so if you know of any available, then please get in touch. If we don't find any, the alternative is concrete kerbs, which we would rather not do.