The 'humpback' at Laverton bridge, due to its higher replacement deck, has been testing PWay minds these last few days. If the hump is too prevalent, it will hinder the correct stressing of the CWR, so it has to be smoothed at each end. The lift required was too much for the tamper, unless dozens of passes were made. 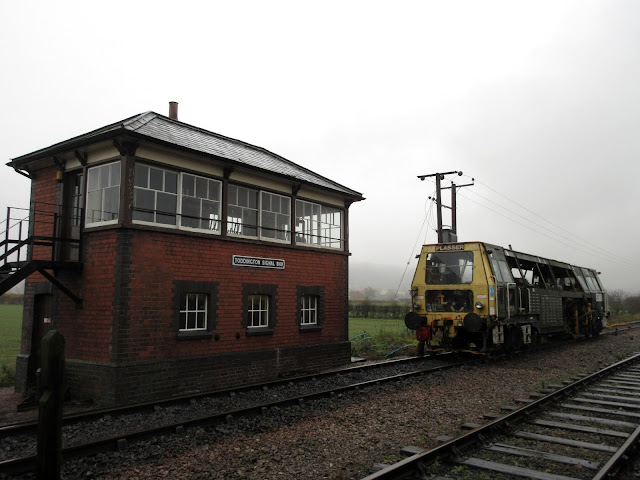 The tamper was out at Didbrook on the normal running line yesterday, and parked itself by the Toddington signal box at the end of the day. This position was to let out a new arrival yesterday afternoon, the 'Jacker / Packer'.  The what? Then read on..... 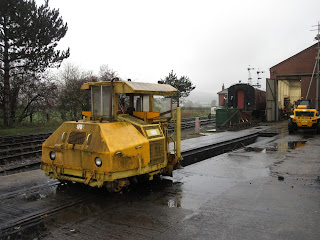 This miniature and less sophisticated tamper has been hired in to do the special lifts at Laverton. Its first day of operation was also used to train one of our own people, so that we could, if required, use it on a bare rental basis. 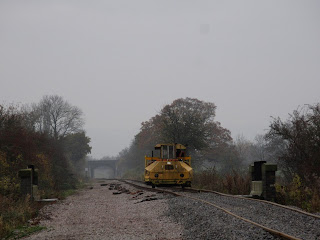 After quite a long wait, it eventually trundled into sight at Laverton bridge. It's not a racing car, OK, but it does rumble along steadily. The southern bridge approach has already had a first pass from the big tamper, and looks reasonably good. 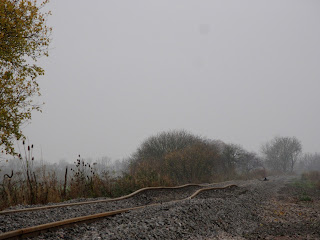 Not so the northern end, where the trackbed is rather lower, and a considerable volume of extra ballast is needed to be able to lift the track to the required height. This was worked out beforehand and various datum points noted along the rail.

A gang of 8 had a go at manually raising the track, but did barely 10 yards in a day. It was really hard going, so the Jacker / Packer was hired in.

The 'lump' visible here is the height we need, so there is a lot more lifting required around it. 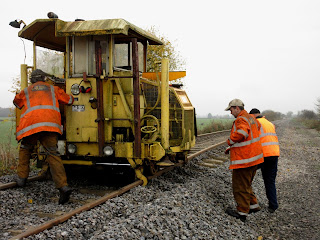 It didn't take very long to set the machine up. All you need to do is drive it to the site, and release the tines, which are secured (for travel) underneath.

Note the lifting hooks behind, which have already grabbed the rail in the picture. 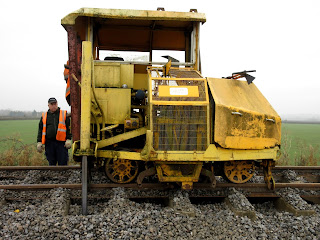 A pair of hydraulic rams then pushes down, thus lifting the machine, which is clinging to the rails.

The height is determined by the operator, using sighting boards. The cant can be adjusted using a graduated spirit level inside, with each ram operated individually. 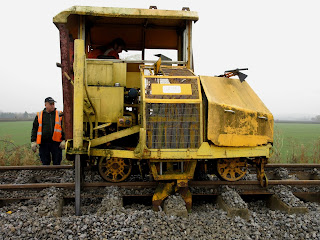 Once the height and inclination are satisfactory, the operator closes two double sets of tines around the chosen sleeper. It pushes the ballast underneath, but does not vibrate like its bigger brother. If you now retract the hydraulic ram, the track should stay up... if you have enough ballast.

You can see here that the lift was a high one, and that we indeed now need more ballast here,as the sleepers can be clearly seen emerging from the ballast bed.

In due course we will run another ballast train over this, followed by a final tamping from the big machine. 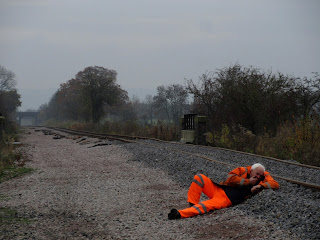 A good old-fashioned visual check along the top of the rails does no harm, and also ensures that we do not go to high. When tamping, you can go up, but you can't go down! Alas. 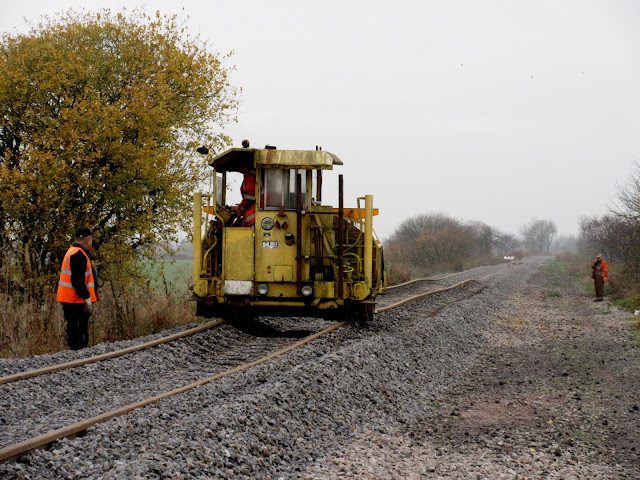 In this picture you can see the job that the Jacker / packer is doing. It has started at the far end of the hump, and is slowly working towards the camera, slowly decreasing the lifts as we get to the bridge (behind the camera) where zero lift is required. A sighting board has been placed at the end of the stretch to be lifted. 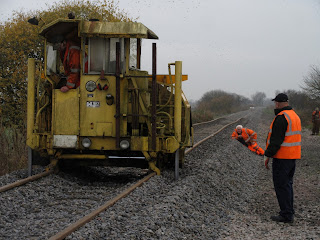 As we move backwards towards the bridge, Peter, prone, confirms the progress while Bob, on board the machine, makes sure the rams go down in the right place. Our trainee Martin, already an experienced plant operator, but not on this one yet,  looks on. 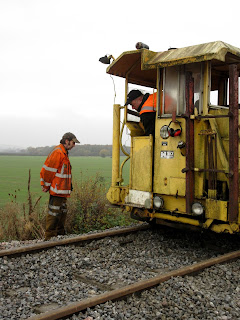 Here Martin is operating the machine, under the supervision of owner / trainer Bob.

It all went very well, it's not a complicated machine to learn.

Our conclusion was that the session went well, the machine did the job it was asked to do. It may well be useful elsewhere on the railway, if we keep it for a while.

Next, more ballast here, and the big tamper returns. 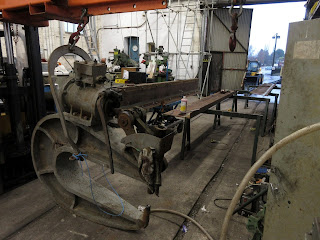 Back at Toddington, work was proceeding in the newly rewired goods shed on the Broadway station canopy. The big riveter has been tried out on half a dozen rivets, which are now in one of the fascia boards. What a lovely construction this is turning out to be. Just imagine the lofty construction above you, with a whole series of rivetted arches sweeping along above the platform side facade. 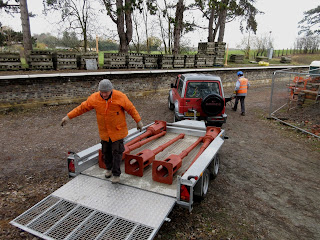 Back at Broadway, a customer came to collect 5 replica GWR platform lamp posts, cast specially for him in addition to those recently planted on platform 2. All profits go to the GWSR, so if you you want one or more for your railway or garden, get in touch via the company website.