The track laying gang returned on Saturday and pushed the railhead almost to the Worcestershire border. 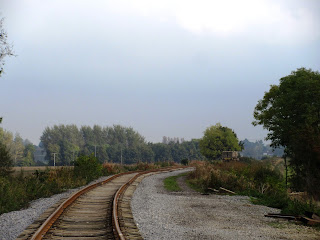 The gang isn't just laying track though, it also had to attend to a number of reported track defects on the running line (we inspect this very frequently) and on arrival at Little Buckland the first job was to further 'tweak' the curve further round, so that another ballasting train could discharge its load. You can see a beautiful curve here, up to a point where it becomes straight. This next bit will be addressed later in the week. 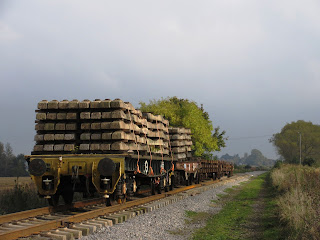 The gang was then able to lay 73 more sleepers, and with the JCB back in action, a further 10 rails were dropped in, i.e. 5 more panels.

The supply train was then propelled up as far as it would go, out of the way of 'tweaking', welding and ballasting going on behind.

Here is the train at its northernmost point so far. 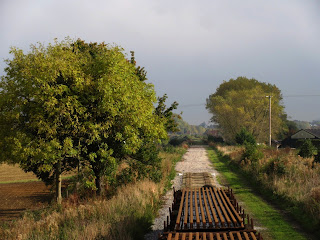 It was a misty morning when these photographs were taken, but for a moment the sun came out, to reveal the glory of the Cotswolds countryside.

The rails left on the two bogie flats in the foreground carry enough rail to bring the railhead to Peasebrook Farm bridge, where the ballast ends in the distance. 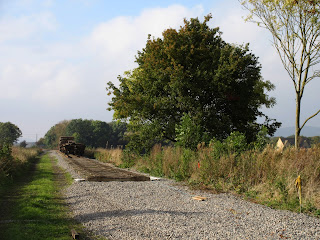 Looking the other way, we can see exactly where the railhead is now, as the yellow post in the right foreground marks the Worcestershire county border.


So much for Saturday. Monday saw an appeal for a small group to help discharge the ballast train that Steve had filled up during the morning.

Three volunteers were able to join Steve and Neil, at the controls of the class 73, to push the newly loaded train up the extension.

As we slowly trundled up the newly laid line, John regaled us with a stream of dubious jokes, the mildest of which informed us of the address of his local policeman at: 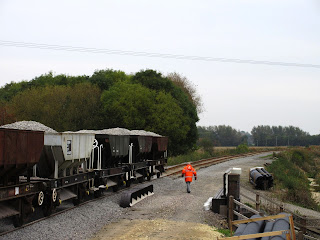 Finally we arrived at Little Buckland, driver Neil commenting that to get to the railhead seemed to be taking longer and longer.

Well we jolly well hope so too.

John is walking towards the spot where the first drop will commence. The pipes in the foreground are for additional drainage near Pry Lane bridge. 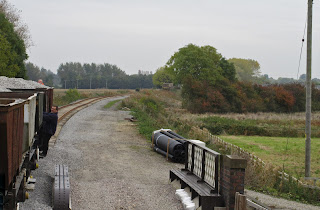 We clamber on board the Dogfish, to crack open the chutes, to make sure that they will open at once on the command. 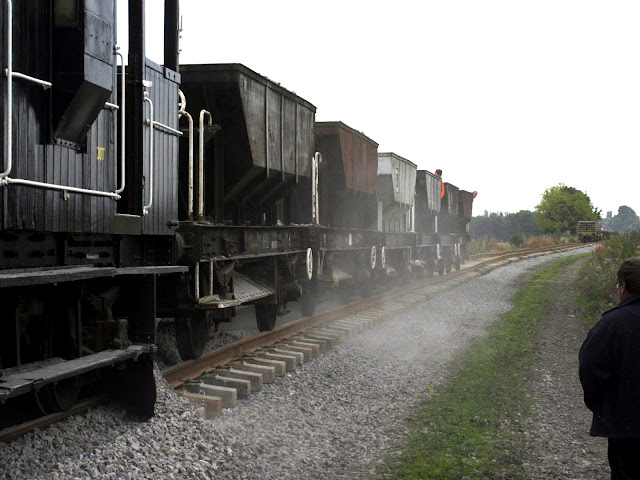 Under a large dust cloud the train is propelled towards Broadway, with the plough from the Shark sweeping the ballast from the four foot into the cess and six foot. £3000 is spent in 3 minutes.... 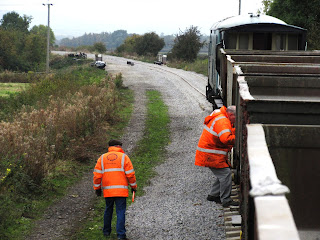 Job done, the crew close the hopper doors again, and clamber down to rejoin Neil in the loco. The newly ballasted stretch is quite short, just up from the bridge to the front of the loco. 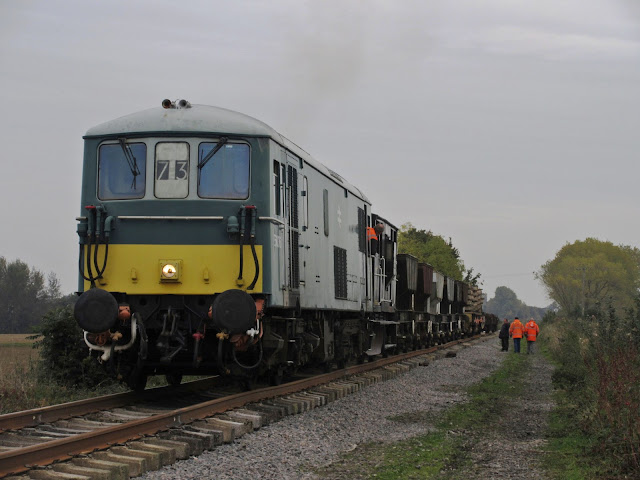 Finally, the ballast train moves up to the supply wagons to couple up, and draw them off the fly fishplated newly laid stretch, so that this too can be welded. You can see the temporary fish plates under the wagons.

The word is that there'll be another ballast dump at the end of the week, prior to the start of tamping next Monday. All this in preparation for the stressing of two stretches of CWR and installation of associated anchor points.