Ballast over the bridge

Thursday and Friday saw two extra days' work on the extension (next to the usual Wednesday and Saturday gangs).
On Thursday, a small gang came out to 'tweak' the track laid up to and over Little Buckland bridge. The curve wasn't quite consistent enough, and there were various bumps in the curve that needed ironing out. The JCB makes a good 'iron'.
Remember the days when it was done with jacks and 12 men with crowbars? 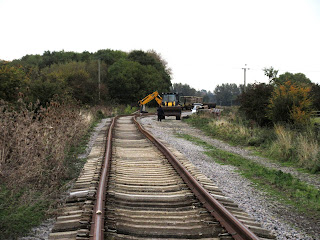 Here you can see the 'before' at the beginning of the day. We're standing on a curve, but at the moment it's a straight, with a sharp turn on to the bridge.

After a day's work on this, it now looks much better: 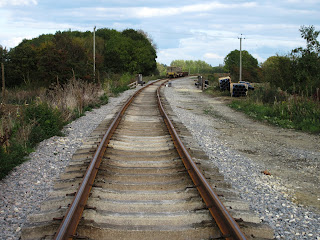 The curve is consistent, and runs right through the bridge. Of course the tamper will make the curve perfect, but it can only do it in small increments, so this is why an approximately correct curve will save a lot of time.

The tamper is coming in a  week in order to level the track (not the final tamp), so that the CWR rail can be stressed. In order to allow the tamper to work, the newly laid track has to be provided with an initial pass of ballast. This is what we did on the second day. 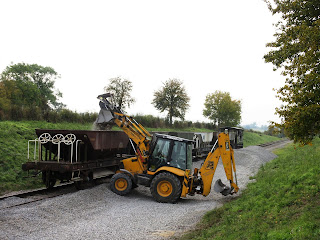 Our train of 6 Dogfish was parked at Stanton and filled this morning by Steve, our friendly contractor.

We had enough material for two loads of 6 wagons; by the end of the day it had all been loaded and dropped. We were very pleased with the result. More deliveries are coming. 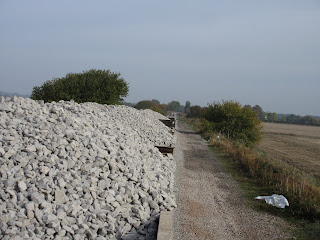 By lunchtime, under a crisp autumn light, the ballast train ventured up to Laverton, and then carefully on to the extension.

The first area to be ballasted was the final bit of the former temporary storage siding beyond Laverton loop.

With this first train, we completed this job, and then moved on further up, to where we last dropped ballast a few months back, on the actual extension itself.

You can see a film of this train, taken from the rear cab of the class 73, here:
https://youtu.be/uWkAqaPxIyM
Because of the wind, be ready for some noise but as we slow down for the far end it becomes quite reasonable. The train sets off from Stanton and heads up to the former Laverton loop along the operational bit at normal speed. It then slows right down to pass over a wide (temporary!) joint near Laverton bridge, and then slowly travels up the recently ballasted temporary storage siding stretch, until it enters the curve at Little Buckland and comes to a stop to await instructions for the drop up to Little Buckland bridge.

Sharp ears can hear the moan of the traction motors (like an old tram) and the typical noise of the air compressor. 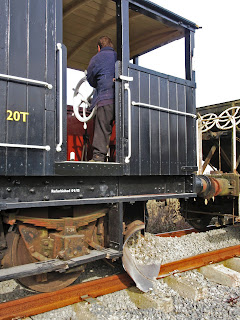 The train comes to a  stop at the end of the previously ballasted section, and Steve drops the Shark plough.

We fit the nose of the plough with an old tyre, as this helps the plough to sweep out the ballast from the 4 foot on to the shoulders. This tyre gets a lot of abuse, but is amazingly resilient. No wonder they are so hard to recycle.

We need the 4 foot to be reasonably clear of ballast, so that the operator of the tamper can see the tops of the sleepers. At this point, we are only dropping ballast in the centre. Other runs in the future will complement this with runs along the shoulder, and in areas where the track has been lifted out of a dip. 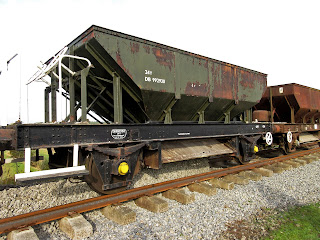 Unlike earlier in the week, we did the runs today one Dogfish at a time. Here's one that is open and discharging. The one to the right of it is already empty. 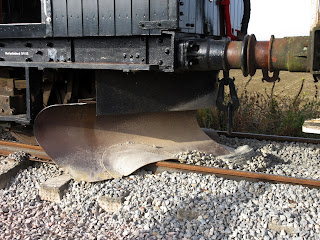 The Shark follows on behind, pushed by the class 73. You can see the tyre on the tip of the plough, embedded in the ballast. At this point, it's about to set off, so no ballast is moving yet. 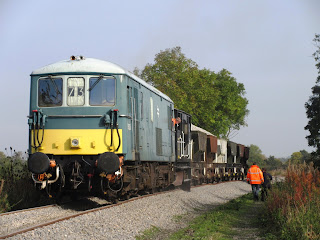 Neil then slowly reverses the train, under the guidance of the two gangers on the right. One wagon discharges, and the plough spreads out the result. 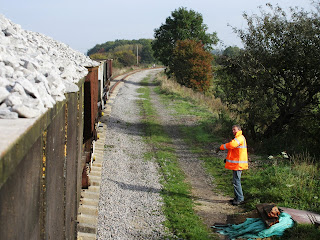 Here the train is into Little Buckland curve, and is being waved on by Lee, who also gives the signal when to open the next wagon.

It doesn't always go to plan - some of the operating wheels are very resistant, needing a second man to heave them into the open position. 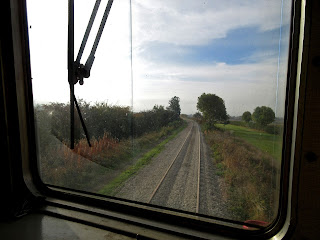 The result of one of the drops can be seen through the cab window of the class 33, as it travels back round Little Buckland curve to get the second load of 6 hopper wagons. The track already looks quite straight, which is the pleasing result of the 'tweaking' done yesterday. It took all day, but it was worth it. 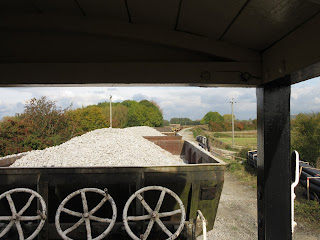 In this view from the veranda of the Shark you can see along the tops of the Dogfish ballast wagons. The furthest wagons have already been emptied, and these last two are ready to go.

On the right is the parapet of Little Buckland bridge, and in the distance you can see the supply train stabled there on Monday. We're nearly at the end! 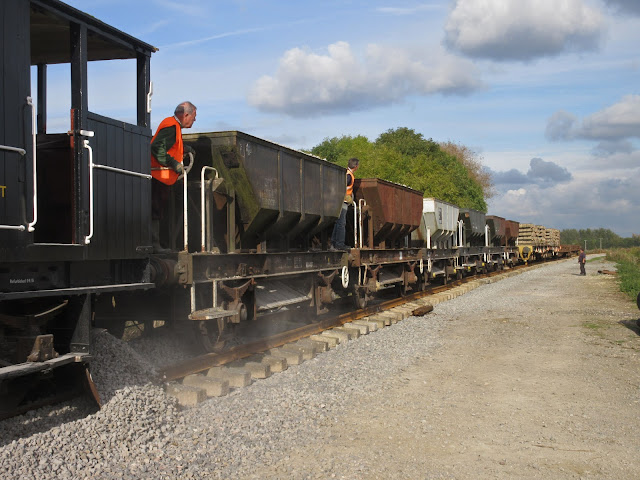 Having arrived at Little Buckland, the first ballast rain ever to come here, the ballast plough deals with the last of the droppings, just as we bump up to the supply train. It's actually a bit in the way, too close. It needs to move further up. 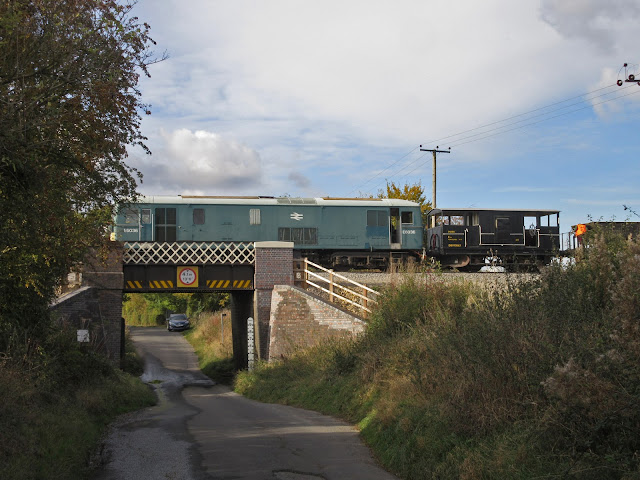 Earlier on this blog a viewer wondered if we could capture a photograph of the class 73 on Little Buckland Bridge, and today we are pleased to say that it was indeed possible to do so. Patience has paid off.

Here then is one of the very first trains to cross the bridge, 40 years after the line closed. (OK, it's not the very very first train, that was the one that brought the sleepers :-)  ). But still a remarkable moment. 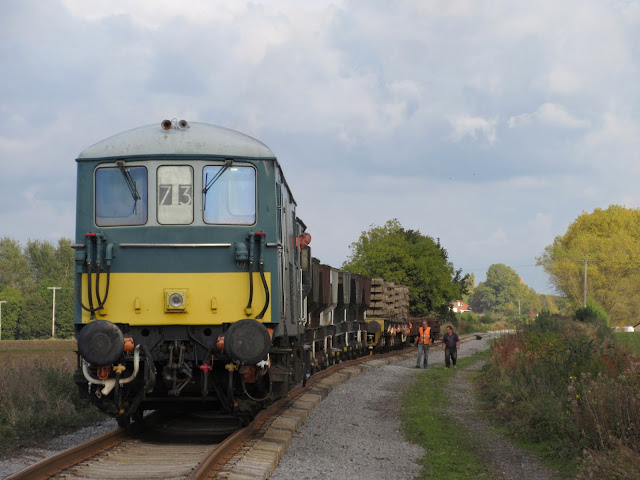 The final picture of the day shows the train absolutely as far as it can go on the rails laid so far. You can't go any further, sorry!
Broadway goods shed peeks out from behind the tree in the distance.

The class 73 has propelled the supply train right up to the end of the track laid, so as to clear the line in the foreground for further 'tweaking', more ballast and to allow the tamper to do its work up to and over the bridge.

Tomorrow then will see additional track alignment, and perhaps also some track laying into the sleepers laid last week. More ballast will then be dropped into the additionally aligned section, ready to give the hired in tamper a maximum to do during its visit.
Posted by Jo at 21:42