Yes, we are now definitely over Little Buckland bridge, rails laid on sleepers, and temporarily clipped up to take a supply train.

Today a pleasingly large team turned out, despite the very rainy forecast. Bad weather does not discourage the PWay team, indeed it has rained for the last 3 sessions! Sadly there is no cover on site. When it's sunny, it's a real pleasure to sit outside and have your lunch, but when it's raining and windy, it's grim.

There were 4 tasks to achieve today:

1. Empty the last of the two bogie flats of 120 sleepers, so that they can be refilled at Gotherington on Monday. This is critical. Then lay the sleepers along the extension.
2. Tie down the wooden sleepers on the bridge with Pandrols.
3. Install more rails along the newly sleepered length
4. Install an IBJ north of the bridge.

These aims were achieved today, but not without difficulty. The railhead was advanced by 130m. 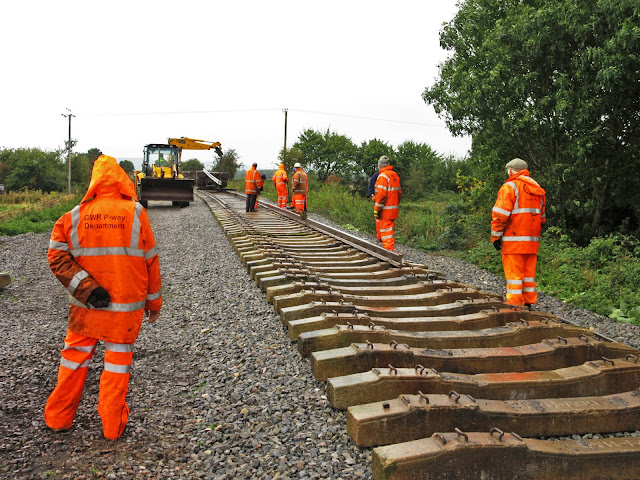 This was the opening position. The rail wagons have not been moved from last time, and here Steve in the JCB is removing a rail from the stock. It is raining heavily. 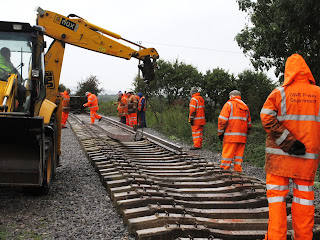 The rail is dragged along to the bare sleepers, and is then lifted into position with a Camlock.

Meanwhile, a small team has gone to the bridge to secure the wooden sleepers with Pandrol clips.
Further to the question raised in the last posting, the reason for the wooden sleepers on the bridge is not only their lighter weight when compared to concrete, but also because they have a cushioning effect on the bridge when a train runs over them. Concrete sleepers are completely rigid, and just transfer the hammer blow straight downwards.
The clipping up with Pandrols was achieved, despite some resistance offered due to the slight variation in the placing of the newly drilled holes, overcome by loosening the bolts on the chairs a bit, then retightening. Job done. 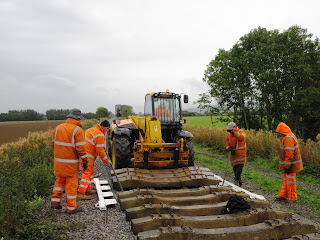 On the 'front line' as it were was a small team placing sleepers fetched from the 120 sleepers still left on the wagon. Because the JCB was otherwise occupied for a few hours, a slightly slower method had to be adopted by using the Telehandler to fetch and also place them. This was done 4 at a time, instead of 8 when the JCB does the placing. The spacer bars were laid alongside, and the final adjustment done by bars, instead of the slings off the JCB. It did mean waiting for the Telehandler, while it drove back the increasing distance to the wagon, on the other side of the bridge. 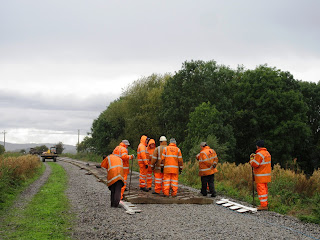 What to do between loads?

Heated discussions were held, interrupted by the occasional arrival of another load. 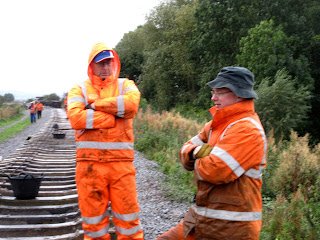 All the time the rain beat down; all you could do was turn your back on it. It also seemed to get windier as we laid away from Little Buckland bridge. 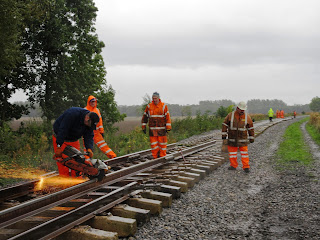 Still in the rain, the rail laying team paused to insert an insulated block joint, a pair of rails with a plastic insulated joint between fishplates. One of the rails supplied had to be cut to size, with spectacular noise and sparks. We stood well clear.

Lunch, also in the rain, was cut to a minimum length and held where we could - in the back of cars, or under Little Buckland bridge. One optimist had brought a pair of folding camping chairs, which, unsurprisingly, stayed in their covers.

As soon as we had finished our hastily eaten lunch, the rain stopped and the sun came out ! The rail team lifted in the IBJ, then resumed the laying of plain rail. 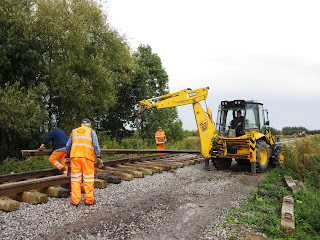 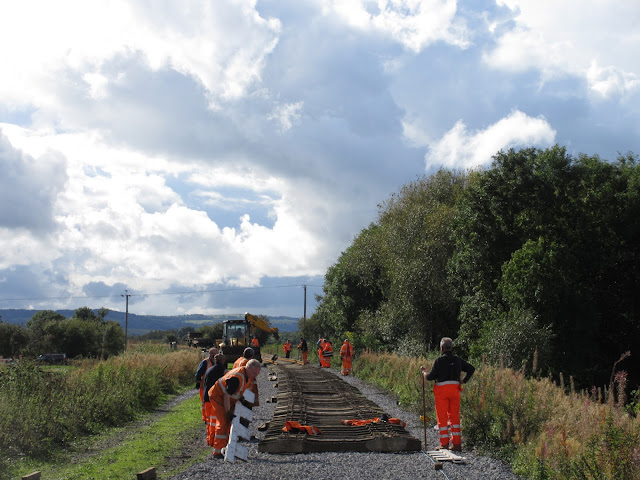 Here in the background you can see Little Buckland bridge (by the pole route), rails being laid with the JCB, and in the foreground the sleeper team getting ready for the next load.

This is the view from the 'front line' as we near the end of the Little Buckland curve, and head out on the straight leading to Peasebrook farm.
The Telehandler approaches with fresh load of sleepers. It's looking a little low on the nearside... and yes, it's a slow puncture.

Sadly, that was the end of the sleeper laying for today. The Telehandler was quickly taken back to Winchcombe for repair, as it is needed on Monday to load the next lot of 320 sleepers at Gotherington.

Losing the Telehandler was a big problem, as we definitely had to empty the sleeper wagon for Monday.
Plan B swung into action. Finish laying the rail up to the last sleeper laid, then use the JCB to empty the wagon, one way or another, to make sure that it was available again. 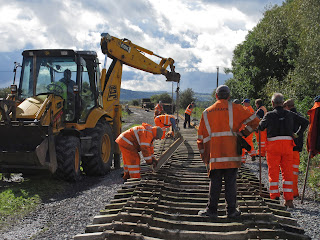 Here the railhead advances with another new rail, one of 14 laid today. 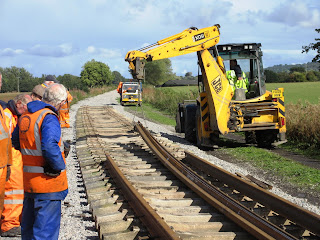 After a while we got to the end of the sleepers laid - we laid 84 today, with the last 40 off the wagon laid out roughly along the line, but not yet in the right place.
This will be addressed next time, with the slings off the JCB. 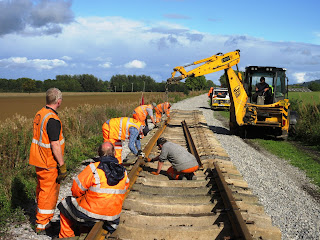 With the last two rails dragged up, the first one of the pair is lifted gently into place. 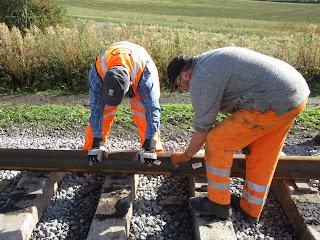 How do you ensure the correct spacing between rails? An SHC clip does the job perfectly. 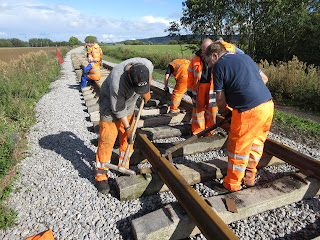 Once the rails are in their place, they are clipped up, without pads or 'biscuits' (the little orange plastic pads) every other sleeper. Not yet a finished job (it all has to come apart again for the CWR stretching, when the rail is lifted off the bed and onto a series of rollers) but good enough for the supply train on Monday. 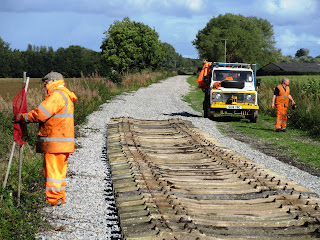 A flag is put up to signal the end of the track laid so far. Here you can see that we are coming out of the curve, and on to the straight.
This means that you can no longer see the Broadway goods shed, as there is an 'S' curve and from here, the shed is hidden behind the trees on the left. 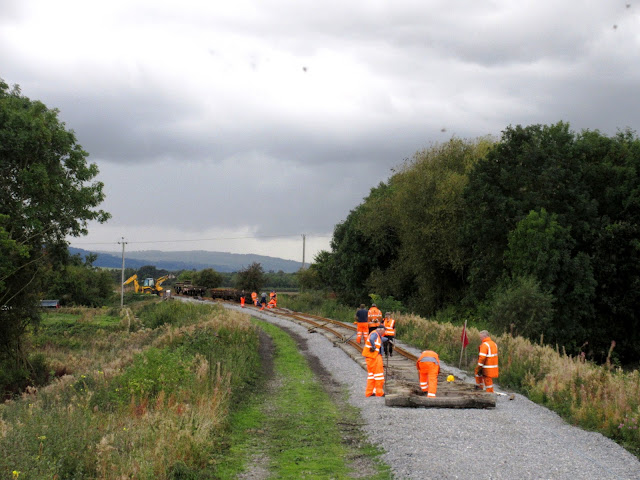 This final view, looking south, shows the situation at the end of the day. The rails have reached the red flag just planted, and the JCB is taking the last 40 sleepers off the wagon in the background, to lay them roughly in the foreground.

More of the same next Saturday!

In other news, ballast is being delivered at Stanton for dropping on the rebuilt temporary storage siding at Laverton, and on to the new rails recently laid in the area of this picture. There will be 14 lorry loads.

It is hoped to start ballasting from Broadway after Christmas, not only south to meet the existing ballasted section at bridge 4, but also northwards into the station itself and to the northern headshunt. Large, 9 ton dumpers will be hired in to ferry the ballast along the trackbed. It's the coldest and wettest part of the year. Will the dumpers be fitted with heating and windscreen wipers? Alas....

Preparations are also being made to stretch the welded section to the correct length. This is done in pairs of sections of approximately 500m each, with each end secured to a tightly clipped and ballasted stretch of track. They are then pulled together towards the middle, where an appropriate piece (previously calculated according to length and temperature) has been cut out. It will be interesting to see this done; it requires a lot of volunteers at once to unclip the stretch, place it on rollers, and when stretched, tightly clip it up with all the bits and pieces into the final position. With two halves of 500m, that stretch could be a kilometer long.
Errors and omissions excepted, this as told to your blogger, for whom the laying of CWR is a first! It will be interesting.

In further news, the welders are coming back next Wednesday, to follow up on the recent burst of track laying.
It's all go here!

Finally, as requested by some, a map of the extension. The track laid from the former Laverton Halt is filled in in red. 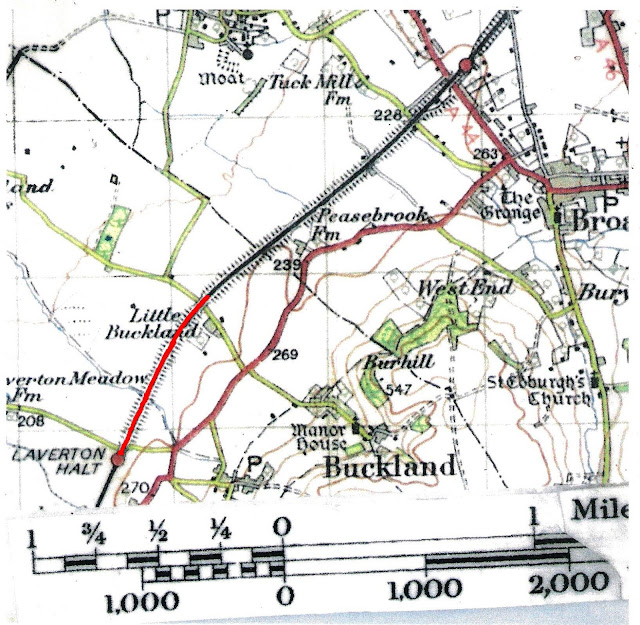 Note that this is a very old map (which is why it was used as a base) and it not only shows the railway when in regular use before passengers services stopped in 1960, but also the old route of the A46 before it was improved. Both the A46 and the A44 go through Broadway, that must have been quite some traffic. Today the A46 runs several miles to the west, and the old road has been renamed the B4632.
Posted by Jo at 17:54