A crew of 3 turned out today to discharge the ballast train loaded at Stanton a few days ago. Stanton is just around the corner beyond the bridge in the distance, so it was a short push for the class 73, seen here arriving at the former Laverton loop. 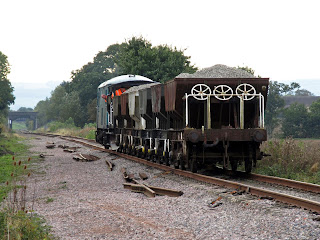 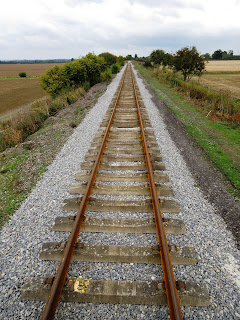 Just north of the former loop is a 400yd stretch of line that was briefly laid to accommodate a number of PWay vehicles in temporary storage.

This was taken up again, leveled, given a first bed of ballast, the concrete sleepers put back and new, heavier rail put in. The (slightly) lighter rail used here first has been taken up to Broadway for use in the sidings there.

The job today was to drop ballast in here. A first train has already had a go on Wednesday, today's train is the second and most of a third will also be needed. That may happen a week from now, as the Stanton supplies are all used up again (14 lorry loads).

Neil C drove, while Neil B and your blogger tried to avoid hernias from the unwilling doors of the Dogfish. There is a door for each of the two sides, and a centre, operated by a handwheel and a screw device. They get stiffer and stiffer, so much so that a special lever is now used to get more purchase on the stiff handwheels. Furthermore, once a ballast door is opened, it is impossible to close until all the ballast is discharged. 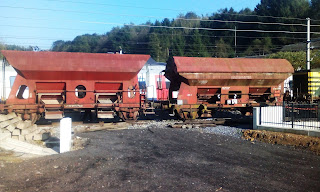 A better design is used on the Continent with this type of ballast wagon, above. The ballast is directed towards the side or the centre by means of moveable chutes on the side. These are operated by LH and RH levers, which do not seize up, and which are easily adjustable, and can even be closed again, to be re-opened further along. Gosh.
Always interesting to look over the fence.

We didn't use the special issue extension lever today, but moving some of the wheels proved to be a two man job. With the train stationary at the end of Wednesday's drop, we opened all 6 centre doors. Ballast immediately fell into the four foot, until the pile underneath obstructed further falls. 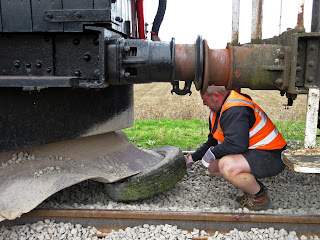 A special piece of kit was then pushed on the end of the 'Shark' plough - a rubber tyre! The plough was then wound all the way down, thus pushing the tyre into the ballast. This has the effect of increasing the rate at which the plough scoops the ballast out of the four foot and into the cess, i.e. outside the track. Ballast is needed outside in order to fix the sleepers in position and to prevent sideways movement.

The way the ballast is discharged is quite interesting. With all centre doors open, and a pile of ballast under each Dogfish, the train is slowly reversed over the drop site. Only the first wagon continues to discharge, the other five having a pile under them.

When the first wagon is empty, it no longer generates a pile, so the second wagon starts to empty, and so on. At the rear, the 'Shark' plough sweeps a substantial part out of the four foot into the cess.

There's a video on YouTube of how we did it here:
https://youtu.be/LjOA_HbRcFw 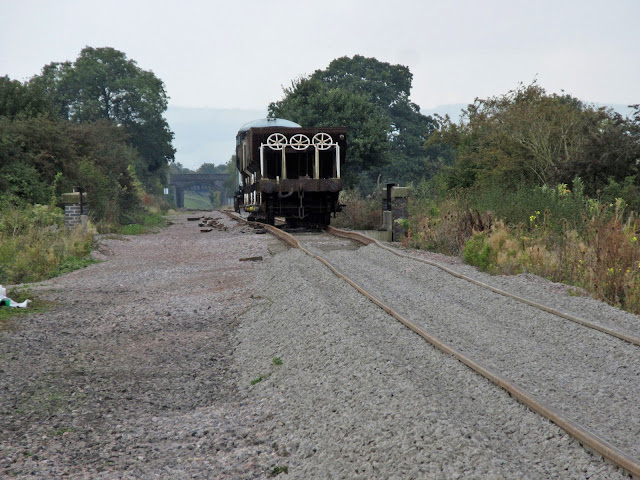 As the train rumbles into the distance, it reveals Laverton bridge, and the section treated yesterday. Another delivery of stone is expected next Thursday, so a final drop on this section could be possible next Friday. 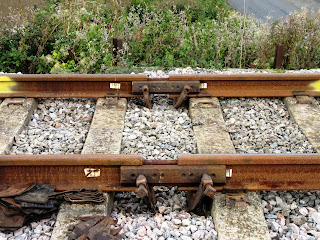 Great care had to be taken when negotiating this bit, where there is a larger than usual gap in the rails. It's here where the first rail stretching will take place, with hydraulic assistance. This is the centre of a 900m section that will be tensioned. After calculations, an appropriate gap will be cut out here, the rails drawn together and the gap welded shut again. 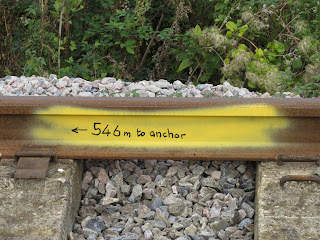 The end of each side to be pulled is anchored to a stretch of rail that is firmly clipped up.

The 900m in the middle are not clipped up. On the contrary, all temporary clips are removed and the whole length is put on rollers.

Once the gap in the middle is welded shut again, the whole length has to be firmly and finally clipped up, all at once. That's a big volunteer ask, so get ready. 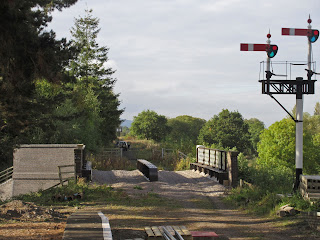 Further along the track, at the gates of Broadway, a contractor was about to start removing small trees and undergrowth that has crowded into our profile.

You can see the problem in the above photograph, taken along the platform line. 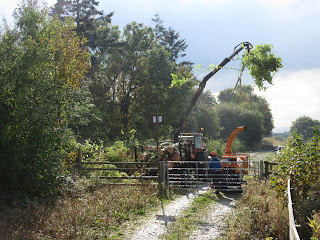 Taken from the opposite platform, this photograph shows progress made this morning.

The birch scrub on the left marks the site of the former wooden signal box. 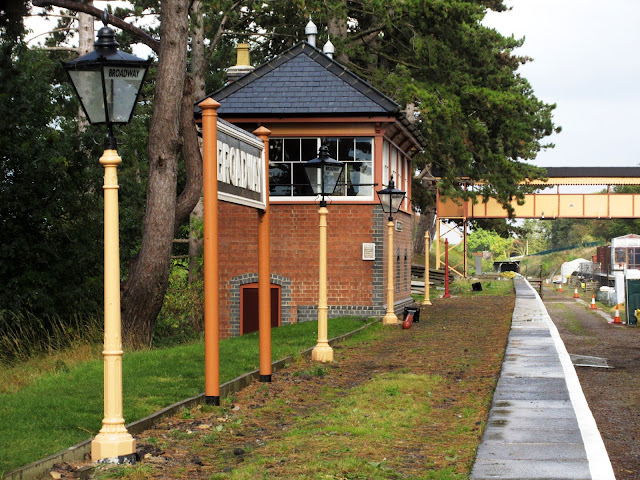 Turning the other way, this photograph shows the line of GWR lamp posts gradually lengthening, 'marching' down platform 2. Only a single post was delivered yesterday, due to a problem with the foundry's shot blaster. On the other hand, we expect to receive 3 lamp posts next week, making 9 received so far.

In the middle of the picture on the ground is a ball topped square gate post. This will support a gate for the steps leading down to the signal box locker room. As we need quite a number of these, we have given agreement to make a pattern for these too. Once those for Broadway are supplied, we will be able to sell to outsiders. Anyone interested, please get in touch.
The ball topped posts were used to support spearhead fencing, and for gates within the fencing. Essential equipment for a realistic looking GWR station!