A gang of 11 today dealt with the remaining wagon loaded with 140 sleepers, still on board after the Telehandler puncture put a premature stop to its unloading. It was a bright and crisp day, although spirits were a bit low to start with, as the JCB was not available today due to an electrical fault. Rumour wanted that Stevie finally blew his cigar lighter! Will it be repaired in time for sleeper loading again? Watch this space. 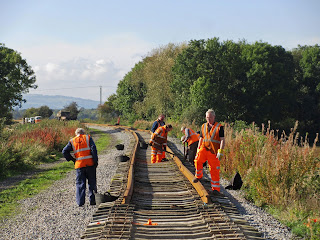 Last week's rail placing was not completed to perfection as there were not enough SHC clips available. Today more baskets of them were brought up, and the first thing the rail team did was fasten the newly laid rail to every other hoop. This required some juggling of sleeper positions underneath. The rail ends also have to be level and properly opposite to each other, otherwise it makes life very difficult for the welding team. 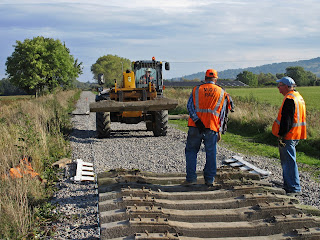 The Telehandler has had its puncture repaired and, in the absence of the JCB, had to both bring the sleepers (its normal job) as well as place them (the JCB's job).

This slowed the job down somewhat, as while the JCB is placing sleepers from piles of 8 brought up, the Telehandler can normally drive back and get the next 8. Not today though. 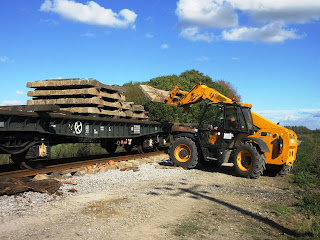 Here is the Telehandler picking up 4 sleepers (it wasn't always possible to take 8 at once, due to stacking overlaps).

A side issue for speed of laying is the distance of the Warflat from the rail head - alas, this is getting longer and longer. Well, what do you want? 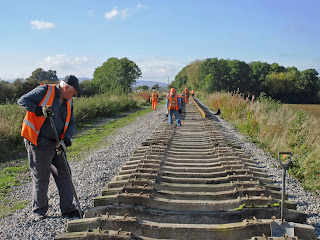 When the Telehandler offers up a set of 4 sleepers, these are often not in line on the forks, and after depositing on the ballast, they have to be adjusted on the ground for approximate siting. Here Neil and Jim do this, while the clipping team is at work in the rear. 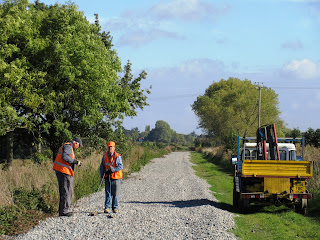 After a while, say after 30 sleepers or so, we have to move the line along a bit.

Here Jim and Neil are planting the next peg. They just follow a line of yellow dots placed previously by someone who knows where we are going!

You can't see Broadway goods shed any more, as we are now on the straight and it's hidden behind that big tree on the left. 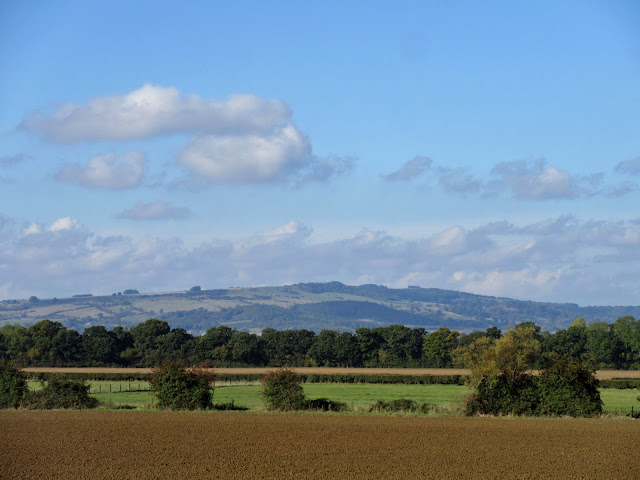 Behind Jim and Graham lies the beautiful Cotswold countryside. This is what our passengers will see in the future, as they take the train to Broadway. It's Dumbleton Hill, with its top of trees. Beautiful, isn't it? 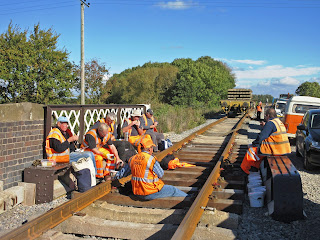 Time for lunch - we don't have a tea break, we work hard here. No rain today - we stayed dry, and if we're honest, enjoyed our sit out in the sun.
Notice a certain class division here... lowly workers on the left, management, guarding the cherry sponge cake, on the right. 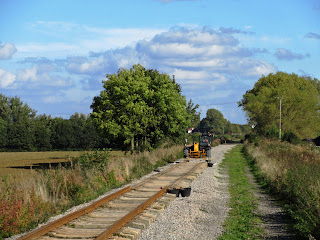 After lunch, and back to work. The Telehandler was already on site with the next load, while we rode shotgun on the Landie. Yee-haw! 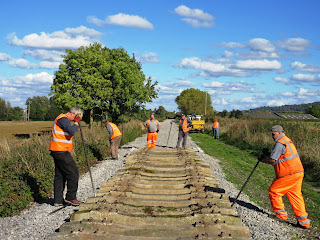 Some complaints percolated forwards that the sleepers weren't laid as straight as they might have been.

You can see their point. They look a bit higgeldy-piggeldy, you won't get a rail in like that. Nigel here is busy with a small team getting them all nice and straight in a row. 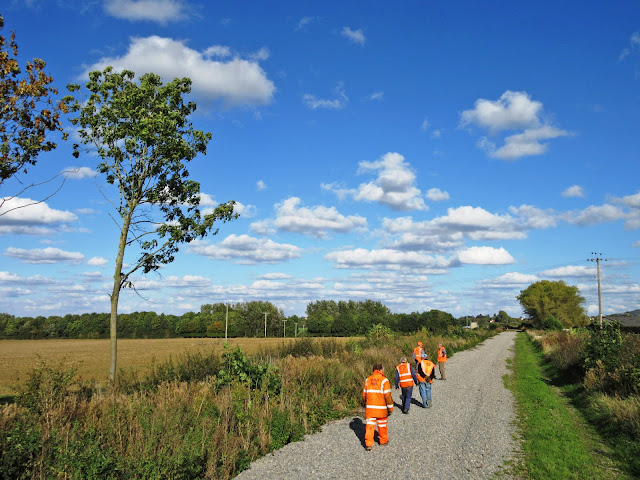 Another lovely view, this time looking north towards Broadway.
Where is this lot off to then? 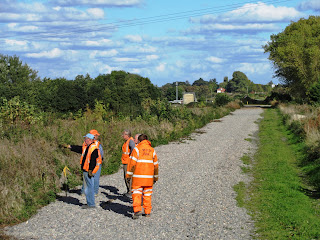 Ah, that stake on the left marks the Worcestershire county border. Passports ready.....
Now you can see Broadway goods shed again, as at this point the offending tree blocking the view is just behind the camera. But during the day's laying we got nearer and nearer to this tree (without quite passing it) and towards the end of the day you could see the goods shed from where we were working. Progress! 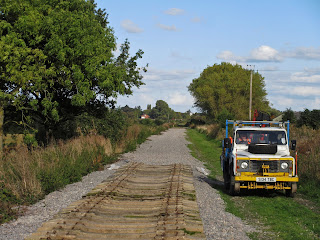 Suddenly, Alan on the Telehandler said 'the last eight' and it was true - we had laid all 140 sleepers. Hardly a record (the team have achieved a lot more, but with two machines and a bigger supply). Sadly we were unable to lay any rail in, but the sleepers are now in a nice straight line, and with the help of the JCB next time, it shouldn't take very long. 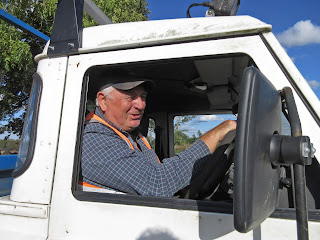 Neil in the Landie - we couldn't do without either of them.

Time to pick up the tools and take them back to Winchcombe for safe keeping. 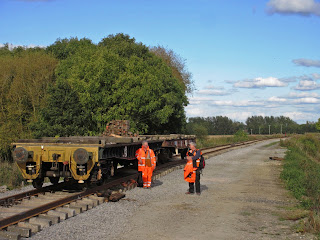 At the end of the day, both Warflats were empty again, and are ready to be taken down to Gotherington for a fresh supply of 300 sleepers.

No doubt we will see them trundle through Hayles on Monday morning. 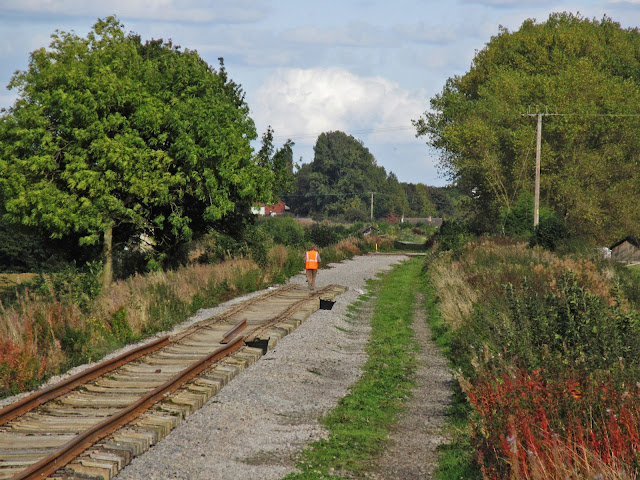 Here's a rather squashed up view of the situation at the end of the day. It makes Broadway look rather closer than it really is.
Ivor is pacing out the distances. He's got to work out how much ballast to order, just up his street as a cost accountant in a previous life. We all had one of those, but now we're a team on the railway.

The little yellow stake in the distance is nearly 400yds away, and marks the site of Peasebrook Farm bridge, and the end of the current rail laying exercise. During the forthcoming winter non-running season, the gang will be working on maintenance on the operational line. The extension will not be standing still however, we will be ballasting the next stretch beyond the bridge, to Broadway. A big job, and an expensive one. We've got £410.000 still to find on the share issue.

- Another replica lamp post was planted on platform 2 today. Three more are expected on Wednesday, it's a promise.
- A 'municipal' type lamp post was planted on the drive, the first of 5 along there.
- Brick laying on the northern wall of the station building has now reached over the top of the end window. The arch won't go in until the internal blockwork has caught up. 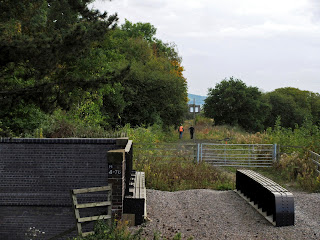 Two members of the Broadway gang decided to satisfy their curiosity, and see for themselves where the railhead is now. It's still almost a mile to walk though.
On the left is the area of clearance addressed by the contractor earlier this week.
Posted by Jo at 18:19