Following the Saturday track laying in the rain, the team of welders came today in brilliant sunshine, in order to weld up the lengths laid previously, starting part way round the bend. 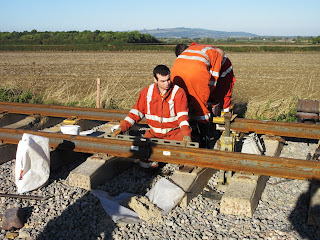 Our beautiful views were much admired, then the serious work started.

The first job is to level and align the rails. Of course when we lay the rails we try to anticipate this, and leave appropriate gaps. This morning, all the gaps had gone, and one large one had taken their place! This is caused by hot and cold during the days and nights, which push the rail along, but no longer return it to the same place when it contracts. You may have this problem with your leaking plastic gutters - hot and cold are the reasons. 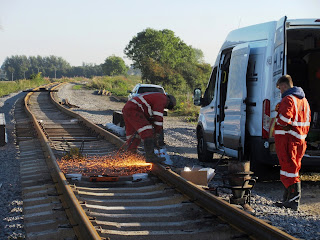 Once the rails are aligned, a 25mm gap is cut using a blowtorch. It has little wheels, so that you can roll it right round the rail. 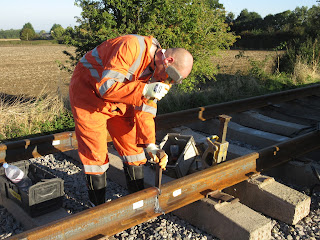 With the cut made, a wedge is used to push out the slice of rail just cut.

It's amazing what a neat slice is cut, using a blowtorch. 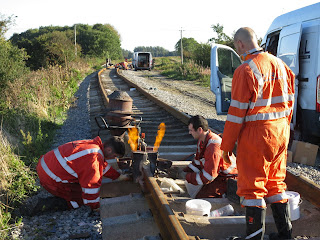 Next, the mould is fastened to the rails, and made 'watertight' (or should that be 'metaltight'?) with a sticky sand material pushed into the joints. The mould is then heated with the blowtorch, creating this spectacular 'Vee' of fire.
The crucible has been prepared in the background, and is ready for turning round on to the top of the mould. 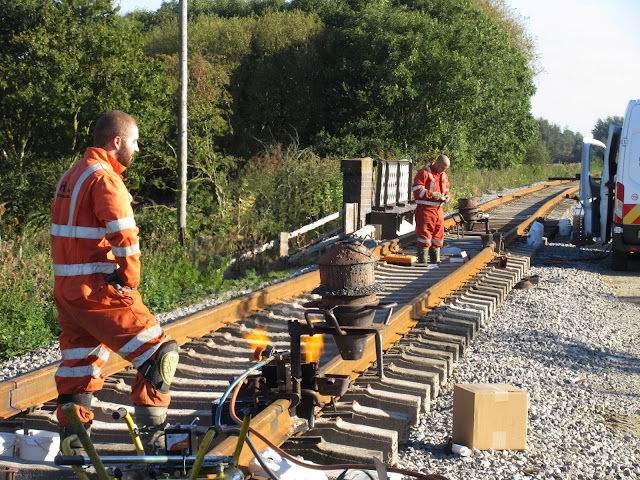 There were three teams on site today, and you can see two of them in this picture, almost at the same stage of the process. 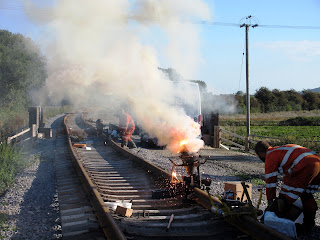 The metal powder in the crucible is ignited, and it's a furious combustion process that is unleashed.

All you can do for the next minute or so is stand well out of the way and watch in awe. 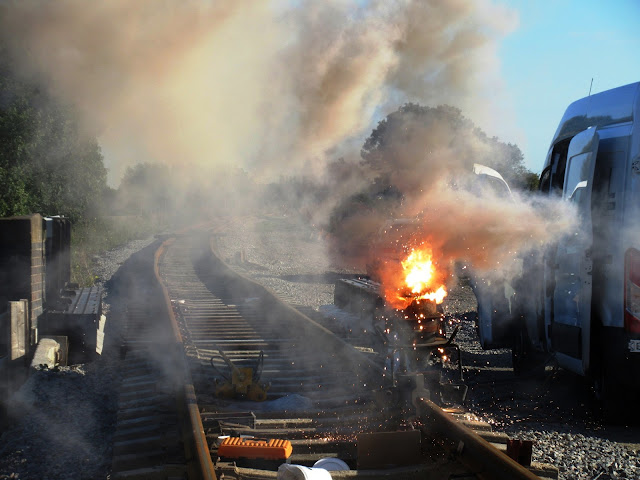 Here the powder is combusting in spectacular fashion, and everyone is stood well back. So too is your photographer, but he has a telephoto lens :-) 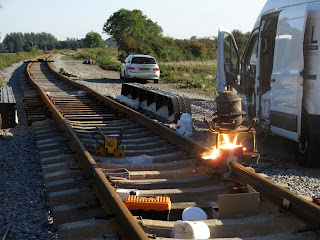 When the combustion process has ceased, the molten metal pours out of the bottom and into the gap between the rails, held in place by the ceramic moulds. 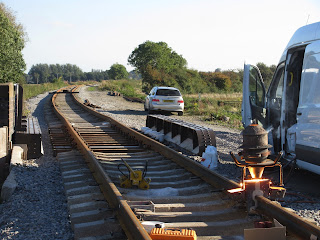 The molten mixtures separates rather neatly into steel in the mould, and waste into the two bowls left and right. 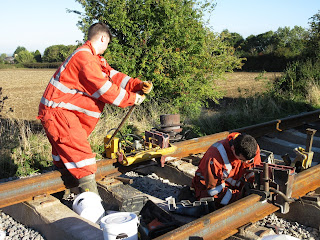 Once the process has cooled a bit, the mould is removed and the excess material is cut off with a hydraulic ram. As a final touch, the surface is smoothed off using a rail mounted grinder.

On a good day, each team can do 6 welds, and with three teams here today, a good result of 18 welds was achieved, or 9 lengths. Our friends from Haigh Rail will be back again soon.

Thanks, guys ! We really appreciated your hard work. All done with good humour too. 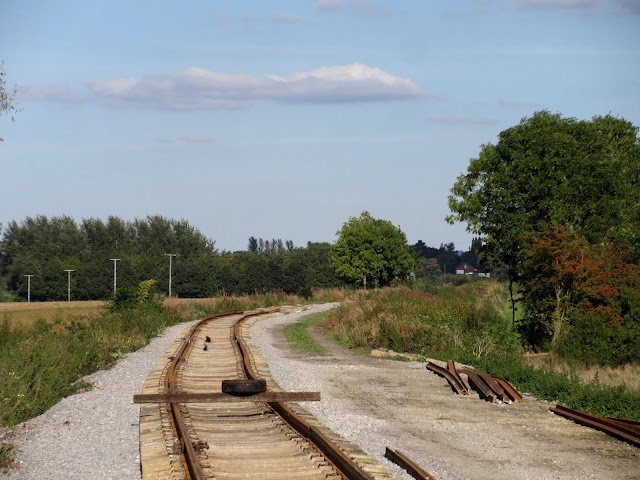 Over to the railhead.... here in the sunshine we can see that the Saturday gang almost reached the end of the curve. While in this curve, you can see the Broadway goods shed, the red building with a white caravan in front of it in the distance. It's still another mile or so away.
On the right is a supply of new rail, which was taken off the bogie flats earlier in the week in order to allow them to be loaded again with a third consignment. The pressure is on! 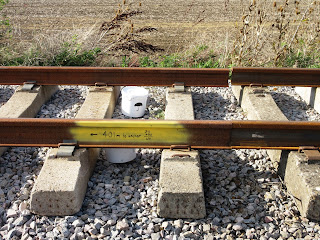 Further back towards Laverton, preparations are being made for stretching the rail between two anchor points.
Annotations about its location have been made on one of the rails.
The metal powder for the crucibles is in pots which have been distributed around the joints to be welded.

Finally, you can't lay more rails if you haven't got a new supply of sleepers.

Caught at Hayles on Monday, a fresh supply of 300 passes through the site of the halt, on its way to Little Buckland.
The two sleeper wagons were dropped off just beyond the limit of operations, as we had to wait for the welders to do their bit and tie the newly laid rails together. Now the train can be pushed out as far as possible, in order to minimise the job for the forklift bringing them to the actual worksite.