Out and about on the extension

Two blogs in one today - a day loading sleepers, and the regular Wednesday activity on the Pway, and an odd job at Broadway too.

A select crew of three spent the day finding and loading sleepers on to the supply train, based on the area around Stanton. 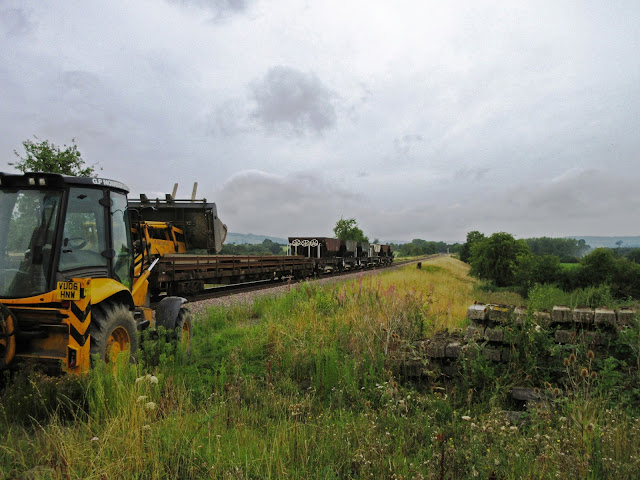 This rather satisfying activity involved finding odd piles of sleepers, and stacking them on the train for re-use at Broadway. Clearing up, and finding sleepers, two birds with one stone. Here is a pile of 60 odd south of Stanton. It has been here since this was once the terminus of the northern extension. 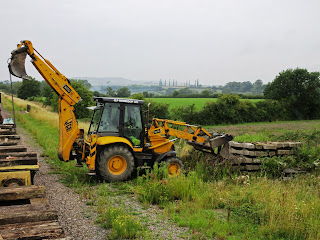 Here is Steve, 'digging in' into the pile. They were almost all of the SHC type, and of mixed quality, some main line quality, some siding. 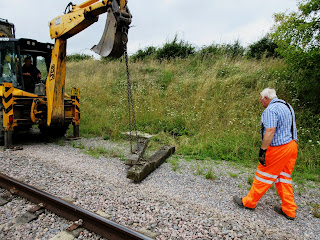 Quite a number were found alongside the running line, usually a pair associated with a catch pit. This arrangement dates back to the time the catch pits had covers of discarded concrete sleepers. Now that we have our excellent drainage department, our catch pits have been fitted with their normal concrete covers, and the sleepers were usually found in close proximity.
Here are two being dragged out, with Neil acting as slinger. 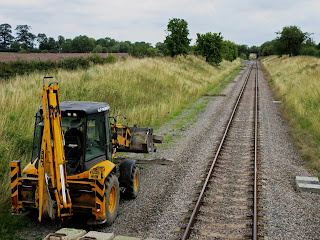 As there were quite a few of these 'catchpit sleepers', we became more methodical. We dragged them all out and put them square on the second trackbed, and then Steve could sweep them up and load them on to the Warflat. 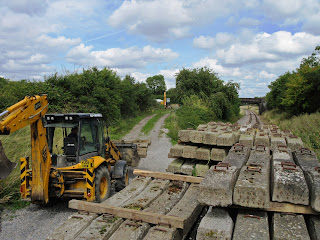 Our pile on the Warflat is growing nicely as we approach Stanton, where another, smaller pile was reported. 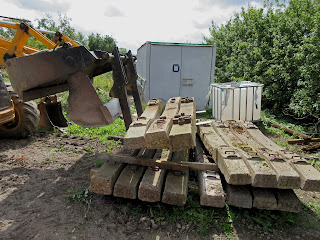 Indeed - there were 15 sleepers here, but just look at that forkful - three different types in one load.
We loaded them all up, but they will need further sorting at Childswickham to separate the types, and the siding from the main line quality. 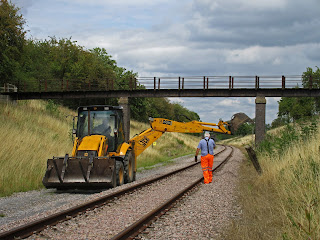 We then carried on heading north, finding more 'catchpit sleepers' between Stanton and Laverton.

By the end of the day,we had tidied up this stretch of the trackbed of all the odd sleepers, and found 128 of them for stacking on the train. What a good haul, basically out of nothing!

At the end of the day the train was pushed back up to Childswickham. 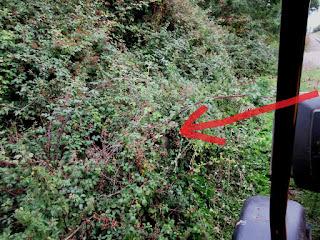 At the northern end of our sweep, we (re-) located a sleeper pile that had been lost to mankind, but Steve still knew where it was. It was just to the NE of the foot crossing (just visible top right) and totally covered in brambles. Steve gave it a whack with the bucket, exposing the end of one sleeper, so that it could be found next time. The arrow marks the end of the sleeper - can you see it? 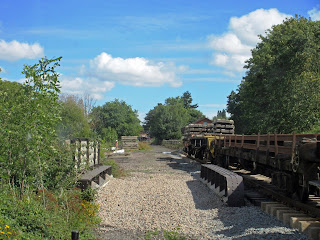 Here is the partially loaded train at Childswickham now, ready for Saturday. There's also a bit more new rail left. Vic from Broadway has walked out to see how we are doing.

Wednesday
The day started with a 'quickie' at Broadway, where the gang wanted to plant the second running in board post and needed some help. This post is our only original, and so being was used as a template to make three replica copies. Two are already up on P2, while the third was planted a few days ago at Broadway. 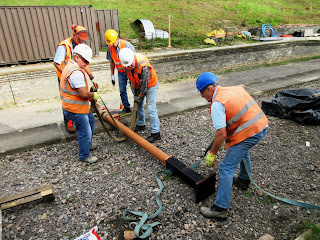 To move this cast iron jumbo you need between 6 and 8 people. We had 6 of us today, and used slings to keep the centre of gravity low, so that we would not have to bend down. 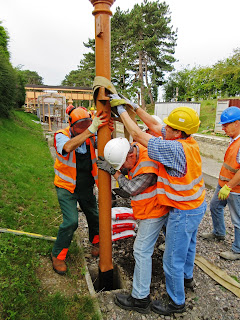 The post came complete with its own 'ice cream cone' finial, although the replicas had finials specially cast for them. We have one original finial, which was found in the clay at Broadway early on. It almost certainly came off the modesty screen posts on P2, which were bulldozed backwards and it rolled off and into the fence, where it was later re-discovered.

If your GWR project needs finials like these, then get in touch with breva2011 (at) hotmail.co.uk, as we can take castings off our original. Profits go to the GWSR. 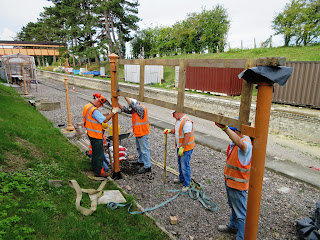 Thanks to good peparation beforehand, we already had the 70cm holes in the platform into which the posts were placed.

All we had to do was to lift the posts in, and then check the levels and spacing using a former made by our chippie, which represents the final board. In this way there are no surprises later when the actual board is fitted.

The nearest post is a replica, and has a sheet of plastic over the hole where the finial goes. 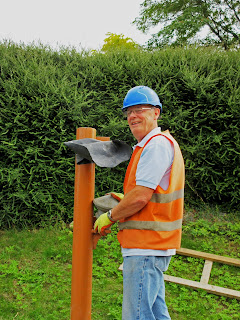 After a great deal of rooting around the various containers on site, we finally found the 4 finials we had cast, now almost 4 years ago.

Here John has just removed the sheet of plastic, and is about to fit the replica finial on top.

His smile tells you what a happy occasion we all thought this was. We have had the running in board posts for some 4 years now, but were unable to plant them until now, following the removal of the containers off P1.

The actual running in board will now be made up, using the cast aluminium replica 12 inch letters that we have sourced. 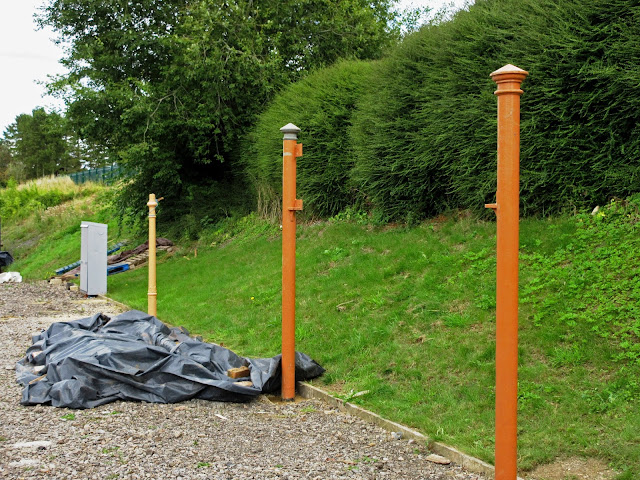 Here they are: The replica posts and its new finial casting (still to be painted) and on the right, the original cast iron post that we planted today. This post was donated to us by a nearby supporter of the railway, and we take this opportunity to express our thanks for this kind gift, and our apologies that it took so long to plant. But we did do it, just as promised. 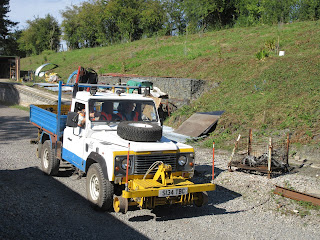 Just as we completed the 'planting', the PWay gang arrived in the Landie. They brought the kit required to drill and plate up the two bufferstops at the northern end, and to raid the site safe for the tools required to do some remedial clipping up at Peasebrook. 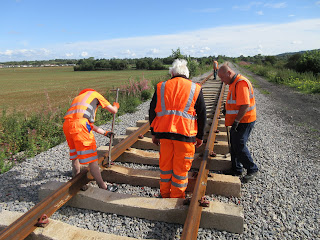 After the welders had done their job, odd clip needed replacing here and there, and someone has to patrol the last 1000m of CWR to make sure that every sleepers has two clips in it. If not, then the sleeper will be left behind when the tamper comes to lift and tamp the track.

The track now needs 'tweaking', and then the last 400m or so to the northern anchor point has to be ballasted (the first 600m having been done a few days ago). 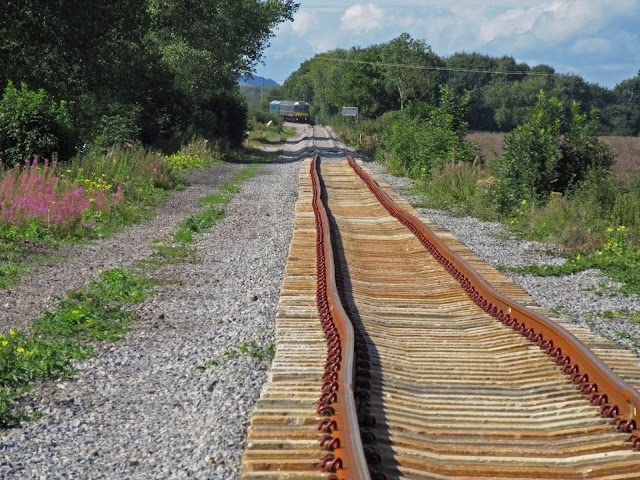 On this picture you can see the bit that was 'tweaked' and ballasted a few days ago, and the bit that still needs doing in the foreground. The anchor point is some yards behind the camera here.
The DMU is paused at the Little Buckland limit of operations. 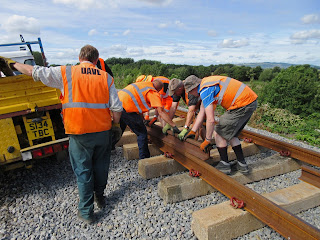 Clipping and verification completed, we moved on to the next job, but not without picking up some of the track laying debris, like this cut off piece of rail here.

It was about 4ft long and quite heavy, but many hands make light work here, and it was soon on the back of the Landie for recovery to the Winchcombe scrap pile. 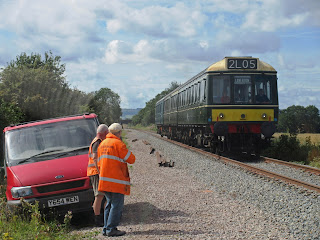 We then moves south to Laverton, where we met the other half of the gang, who were busy extracting the sleepers we found in the brambles on Monday. 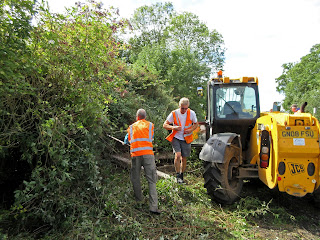 Dave P and Rob had certainly found the sleepers, but the brambles fought back fiercely, until we gave them a slasher that we had brought up in the Landie for this very purpose. 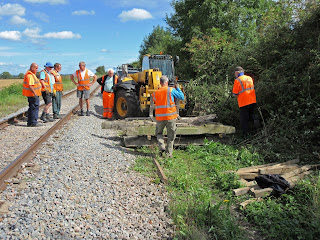 An initial stack was made on the trackbed, to be moved later to a location that was more favourable to loading on the Warflat. 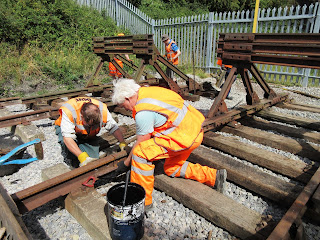 The enlarged gang, save for Dave P and Rob, still stacking, then repaired to the Broadway buffer stops. There was much debate about the best pair of fishplates to unite them with the FB rail, and odd combination with the well worn bullhead of the buffer stop. 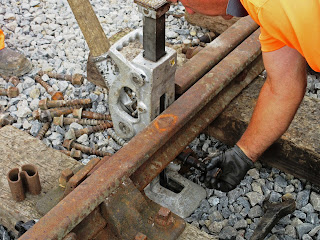 We had a great deal of trouble with the bolts for the fishplates too. The nuts on them would not turn. Eventually we worked out that we had at least 3 different threads here.

In the picture one nut was stuck on the bolt ex storage. How to get it to turn? We fixed it in a vice of our own making, by jacking it up under a rail. Then the spanner managed to undo it easily enough. 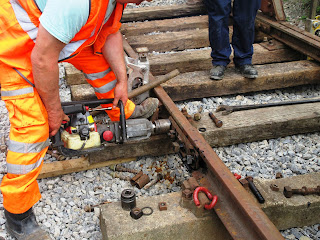 Here is Peter on the nut runner, doing up the bolts that we could match with nuts. Nuts and bolts debris are scattered about. 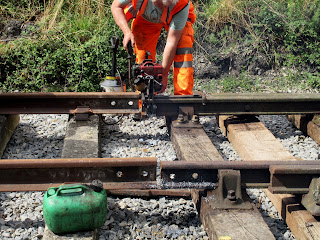 Eventually we got the Cotswolds ones done up, although it would probabaly be an idea to exchange the lifter type plates that we had used on one rail with a plain 95lb pair, which worked well on the Malvern side.

Here is Peter drilling holes for the fish plates in the Malvern side buffer stop. 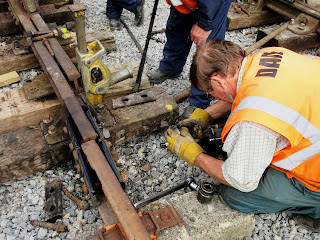 The Malvern side was slightly easier, as Dave D had gone back to Winchcombe to get a newer supply of bolts.

On the Malvern side the issue was that the stops were a bit too far away from the rail to allow the plates to bolt on, and without Stevie it was quite difficult to move the stops around using just the Duff jacks. We got there in the end.

Some PWay members do all the hard work, and some give helpful advice, like Doug here. If there is anything you want to know, just ask.

At the end of the day we had cracked about 80% of the buffer stop job. A bit more sleeper drilling remains to be done, and we need 3 more of the special chairs that sit underneath.
We loaded up all the tools, and gave our tired feet a 200m ride back to the site safe. Ahhhhhhhhhh!