Out on the line

No extension work this Saturday, as we are waiting for an order of timbers for the second turnout at Broadway to arrive. It should be here within the week though. We also need to fill a void where the turnout will go, and for that 100 tons of fresh ballast have arrived. Just need to dumper it to the site now.

Meanwhile there is a list of developing track defects that we would like to attend to, as we can't just ignore them and build the extension instead. 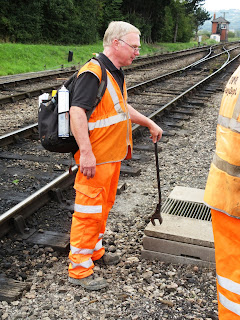 Here is one of our valliant track walkers, in casu Tony.

He is armed with a picnic, a can of yellow spray paint and a spanner. With the spanner he can do up loose fishplate bolts, and tap the plates in passing to see if they are broken.

All the defects are highlighted in yellow, and noted down on a sheet with a description and their location.

Different trackwalkers for different lengths note down their defects, which go on a master sheet - ours, to Winchcombe, covered 4 pages. A lot of it is small stuff like a missing key or a loose chair screw, we write down absolutely everything we spot during our regular walks. 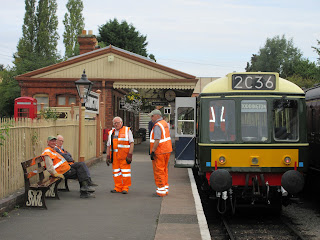 The list of jobs started with one right in the platform but, astonishment, there is a train with passengers parked right there. What??? All we can do is wait therefore, until it leaves. 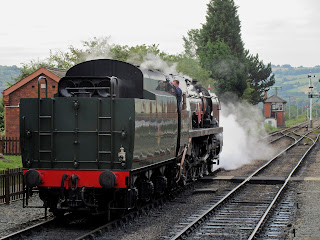 Next to the DMU, there were two steam locos out and about today, and here is the biggest one, P&O, reversing on to its train.

It's quite a noisy one, the open draincocks are deafening when they hiss past. 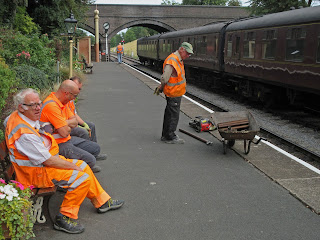 One bench seats only 4 gangers, so a second bench was occupied with more of us, further along.

Pete inspects the contents of the wheelbarrow, which is full of the bits and pieces we know will be required, as per list for our section. It's heavy stuff. 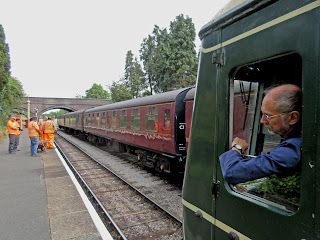 Even the DMU driver's getting impatient now, when is it going to leave? Signals, green flags, bell codes are all required before it can finally set off for Little Buckland. 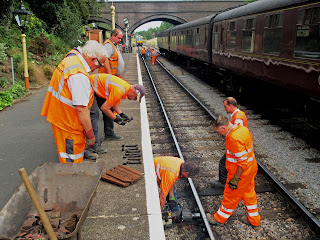 Finally the gang can jump on to the track, even as the DMU is receding into the distance.

It's a broken fishplate here, which is easily removed. There's a choice of new ones laid out on the platform. Unfortunately, there are many different types, especially in this area, a stretch of track laid in the very early days. 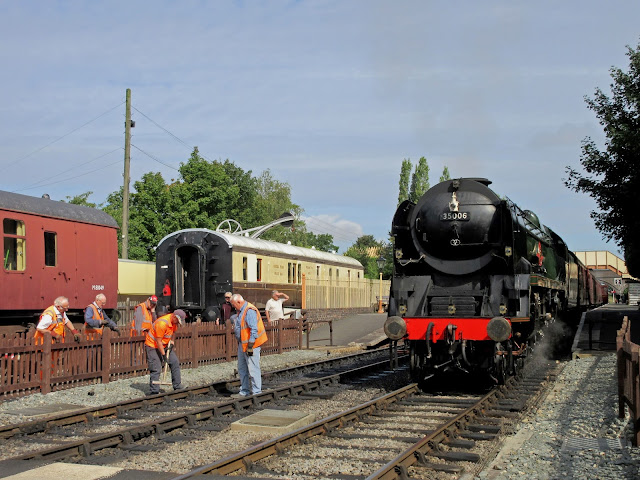 Once through the station, we're on the southern side, and by now P&O is about ready to leave. On platform 1 Tim is just chasing out a loose key, to be repaced by a more modern Panlock one, which is less susceptible to falling out. 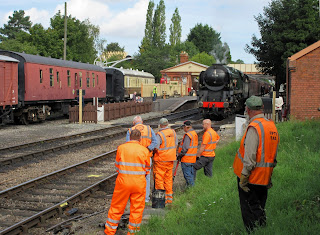 We're all keeping a careful lookout of course, and eventually it's time for the train to leave and we all step aside to let it pass. Should make a good photograph, that giant Bulleid passing in front of our gang. 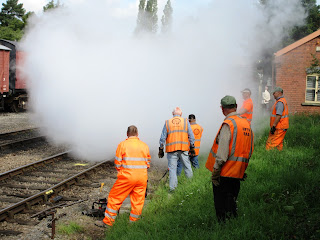 That's what you thought! It must be in there somewhere though. 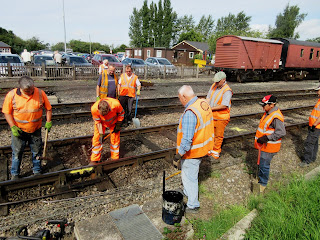 Then it's back to fishplate repair, the one marked out in yellow. Notice the bucket of grease in the foreground, we'll explain about that later. 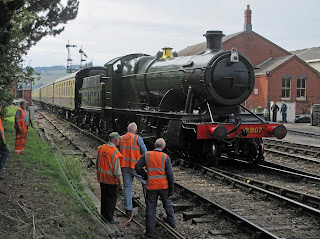 The GWSR being a busy sort of railway (one reason why people come to see us, there is lots going on) we soon step aside for an incoming train from Winchcombe, this time headed by 2807. 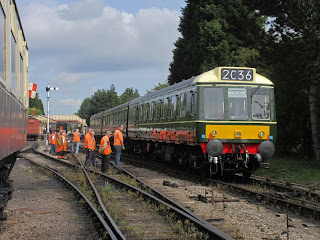 Still in the same area (it gets a lot of use, and hence more issues than plain rail along the line) we get the DMU pulling out, after two trips up to Little Buckland. Now it's a trip to Winchcombe.

This shiny powercar is the one in our picture at Winchcombe last time, pressed into service after the other one suffered from an intermittent engine fault. This was being attended to in the loco yard as we worked. 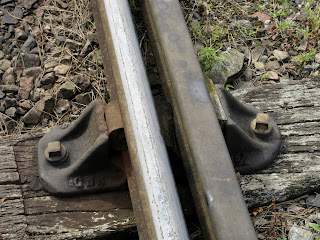 Of interest to the specialist, this is an original GWR check rail chair, with a wooden key still in use on the right. Originally all the keys were made of wood. Then they were replaced by the coiled steel ones on the left, aka Mills keys. You can just make out 'GWR' on the left. 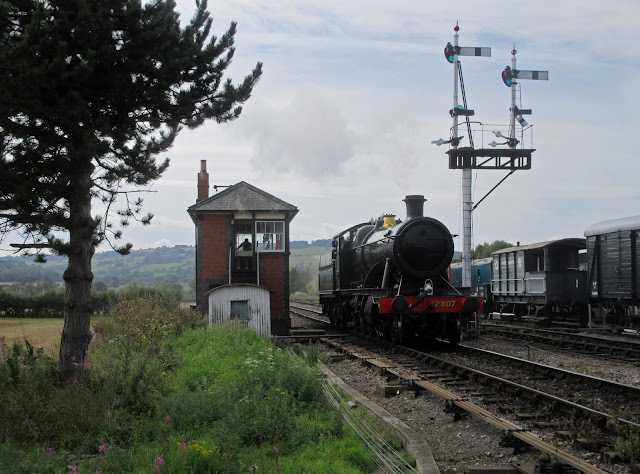 After drawing in with its train from Winchcombe, 2807 ran round its train and is seen here advancing past the signal box and on to platform 1 to couple up again. 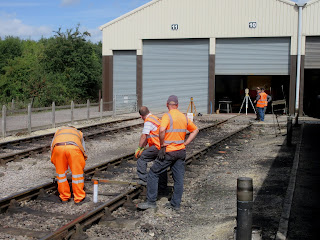 We had another interesting activity on the side, which was to check the levels of the two tracks leading up to (or out of, for some) the diesel shed with roads 10 and 11. These are relatively recent, received only an initial packing and levelling, and are now due to be concreted in with an extension of the apron round them. For that they have to be perfect of course. 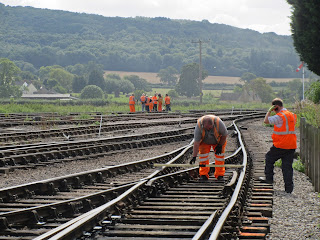 Nigel and Jack determined the height differences, and sprayed the results on to the sleepers in orange, on the right.

In the background is the main gang, on their way with the list of jobs in the direction of Didbrook. 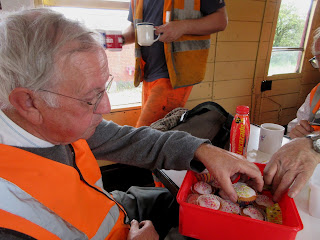 At lunch time we celebrated Nigel's birthday - it comes but once a year, which is a shame, as the fairy cakes were free for this momentous occasion.
Graham carefully considers his options, as armfuls of tea are being brought in the background. 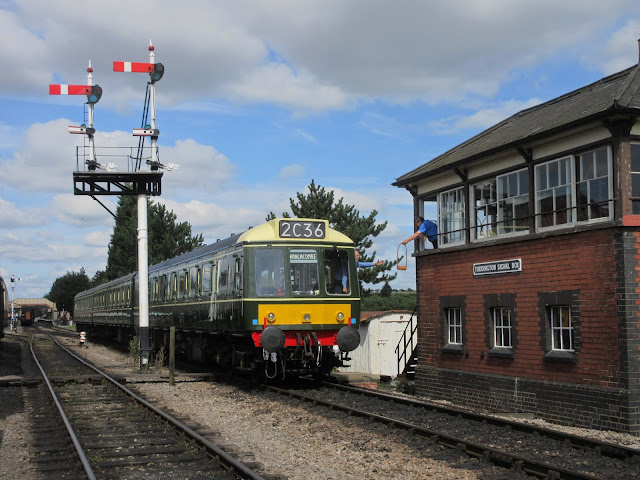 After lunch, and with diesel shed road measurements duly taken, we split into two gangs, with the second working towards the first from Winchcombe.
Here the first gang has worked past the station confines and progress is a little more rapid now, until the DMU caught up with us again. 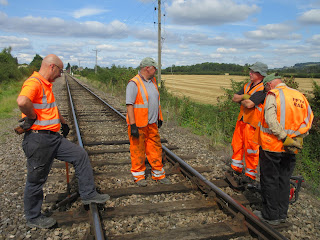 We're approaching Didbrook here, and we're now out in the country. One of the big advantages of this job - good countryside, and good company. Well OK, two advantages then. (Shades of the Spanish Inquisition sketch here, for Python afficionados) 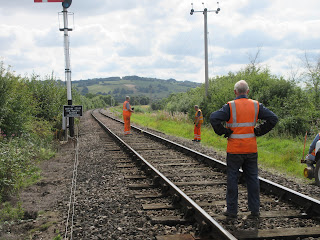 We're expecting the DMU back from Winchcombe next, so John here is keeping a good lookout for it. (this is the same John as in the photograph of Cadbury No. 1 in the platform, recently posted on the Early GWSR Flickr site, and in the same pose with his back to the camera). 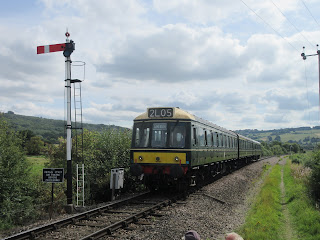 Here's the DMU back from its mission to Winchcombe. It stopped at Hayles to pick up 3 passengers too. 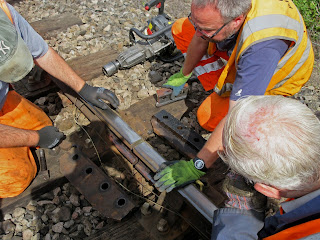 A new fishplate is being fitted here, as Ade holds one half of the old one in his right hand. Mostly they are just cracked, but this one has broken right through. It will be replaced by a special 'deep skirted' one, seen in the foreground. 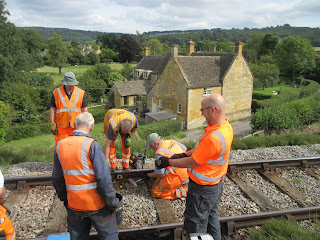 Here the lads are knocking off an old pair of fishplates (they can cling on quite tenaciously). Behind is the picturesque village of Didbrook, then the Cotswolds Edge. 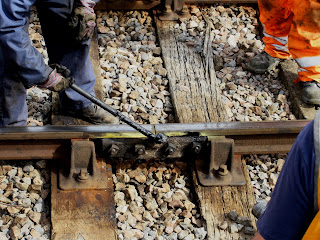 Once the defect has been repaired we need to cancel out the yellow paint. The bucket in the earlier picture, filled with sticky black grease, comes into play here. There's a call for 'pass the Tippex' and then the thick black grease is painted over the yellow paint and hey presto, it's gone! No more track defect. 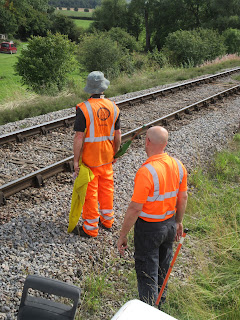 We keep a careful eye open for trains, and have a lookout with 3 flags, ready to stop any train, or to caution it if so required.

Tony's on this duty here. 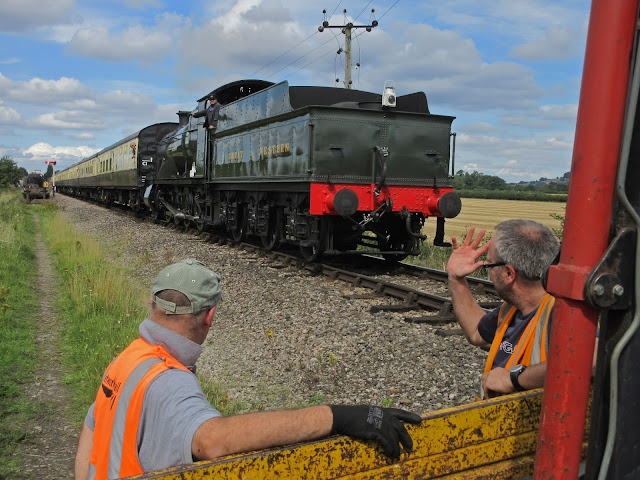 The last train of the day trundles by just as we are packing up. We give them a cheery wave; of course we all know each other, we're a team.