A day trackside can provide the opportunity to photograph the PWay gang at work, and - get some great loco shots from unusual positions. This is what happened today.

We are still waiting for timbers for the second turnout at Broadway, so today was mostly spent sorting out sleepers that where highlighted on Saturday in the Winchcombe area.


One of our members is also a DMU driver, and he was able to report back first hand about a rattling noise reported by a neighbour near Little Buckland. A loose SHC clip seems the most likely culprit, but we went up and asked him to get back to us with an exact location (20 yds north of the 6 1/2 MP).
It's handy having people with two roles, it really helps communication. 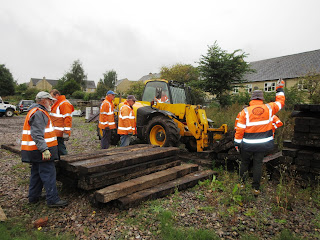 Then we all went off to Winchcombe to attend to several sleepers reported worthy of replacement there. This is not so straightforward as it sounds. You need to find some good quality second hand ones, from a big pile that may already have been sifted for other purposes. Here is the gang having a major sort out, from a pile whose origins go back to the tunnel and Didbrook relays some months back. We have good quality re-useable, gardening quality, and scrap. 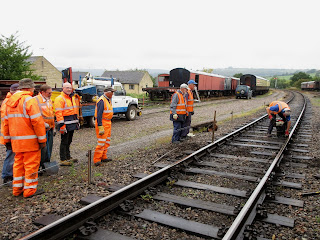 Having dropped half a dozen sleepers off along the stretch of track in question, we were able to start the job. All the sleepers that needed replacement had chairs with 'through bolts' on them. This is bad news.

Here is Andy with the nut runner, having a first go at releasing the nuts on top. When not seized, the whole bolt will spin round, including the big square washer underneath, so it's impossible to undo it. 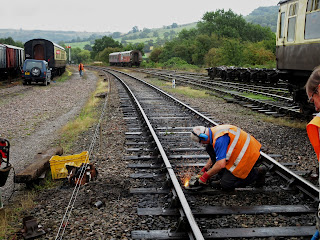 Those that won't go have to be cut. That means getting the genny out of the GUV van, starting the second genny in the GUV to operate the electric winch to let the heavy generator down, and back up. 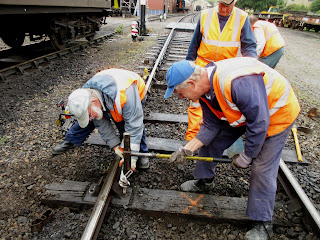 Once you've cut the nut on top right off, you're not out of the woods yet. The end of the bolt still sticks out through the chair, so it needs to be hammered through. Any volunteers for holding the drift with their bare hands? Thought not, so we had a go with an adjustable spanner. Brave John, can you see him wince? 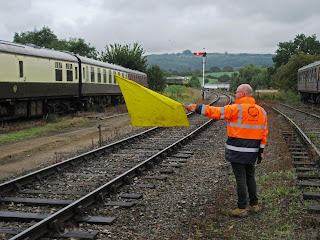 While we are busy doing this, Jules keeps a careful lookout for us for any passing trains, as today is a normal operating day, and there are three trains about, all of them passing this stretch. They get a very clear yellow signal to slow down. Mind you, they are already pretty slow here, as often as not the home signal is on anyway. 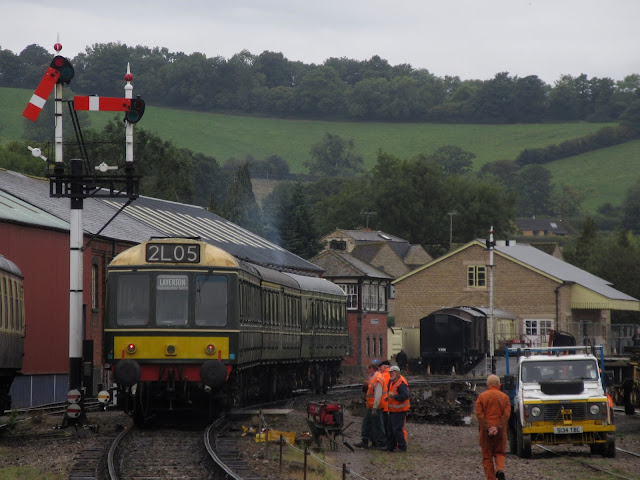 The DMU trundles by, our colleague John L at the controls. Has he found out about where the rattling sound is yet?
This shot shows well how Winchcombe is in a bowl, surrounded by the Cotswolds Edge. The size of the new visitor centre among the other buildings is very clear here. 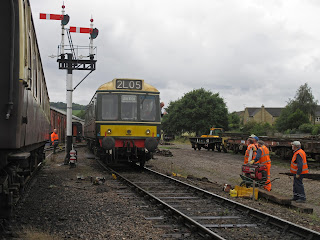 When the DMU returns a few minutes later there is a hasty exchange of shouted information about the possible rattling issue at Little Buckland. Doesn't sound too bad then. Driver John hangs out of his cab to talk to Dave. 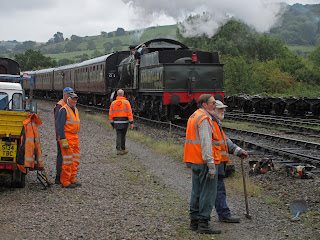 A few moment slater and we are interupted again. When the DMU reaches Toddington, it releases the steam hauled train, which comes back south again.

Dave and John seem to have lost interest in it by now. A 100 year old loco coming by? Yeah, whatever. 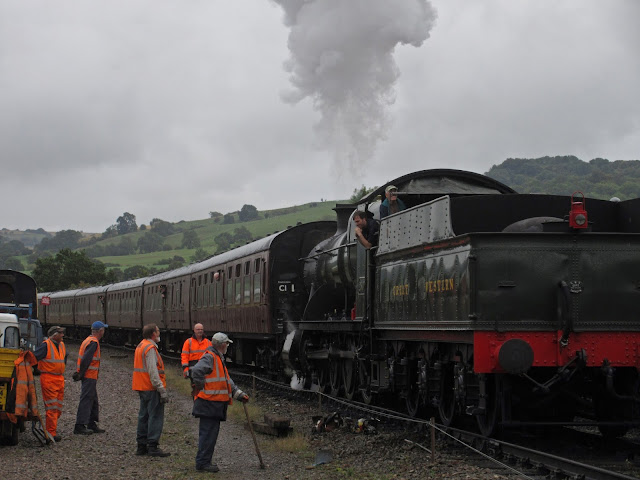 It's that the locos crawl by, because the home signal is on. Suddenly it's off. The loco crew open the regulator with a whoosh, and now Dave and John look up. 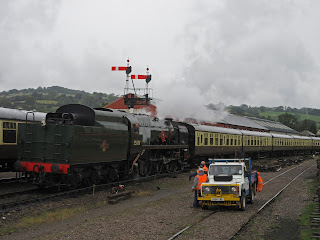 The passage of 2807 releases the road for the crossing Pacific, so now we are interupted by P&O chugging out of Winchcombe. Again the track gang stands back to admire. 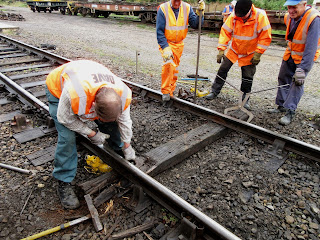 Trains gone, we can address those sleepers again. The main issue here sems to be that they have split. This is just as well for us, as without this, it is almost impossible to get them out. They have to be broken up on site to release those through bolts.

Here is Dave trying vainly to wriggle out one of the bolts. With a bolt in place digging into the trackbed underneath, it is nigh on impossible to drag the sleeper out of its bed with the nips. 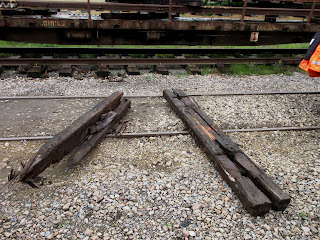 Here are the first two we got out. Not much left of them now. 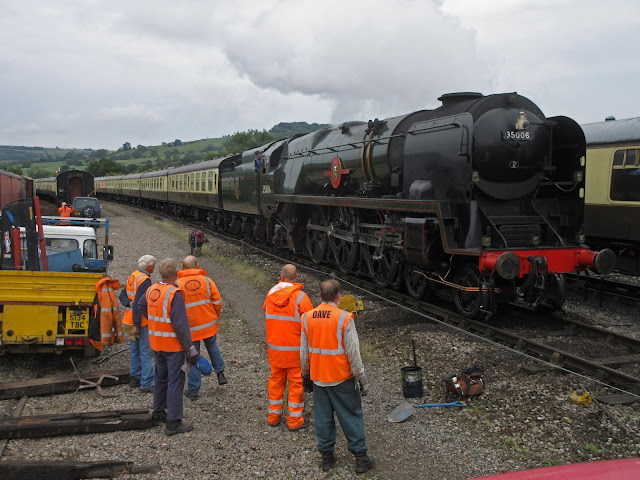 And then 35006 again. Seeing this heavy monster, we are glad that we are changing the sleepers for decent ones. The train of 7 carriages, soon 8, seems to stretch into the distance without end. 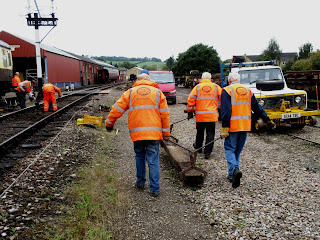 Train gone, sleeper out. Four gang members bring up a replacement sleeper, which will be pulled in and fitted with the easier AS1 chairs that have three screws in them. They can be released from above, that's not too difficult to deal with. 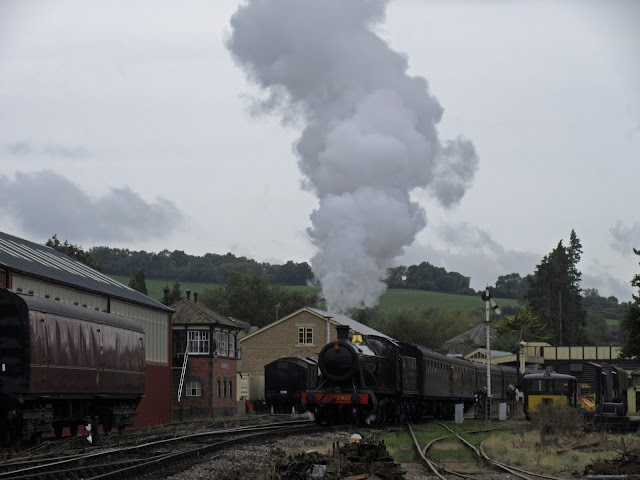 Now it's 2807's turn to steam by. You can see from the exhaust that the temperature is now lower than it used to be. In fact it has been drizzling all morning, which has a single advantage - it makes for a fine, steamy picture. 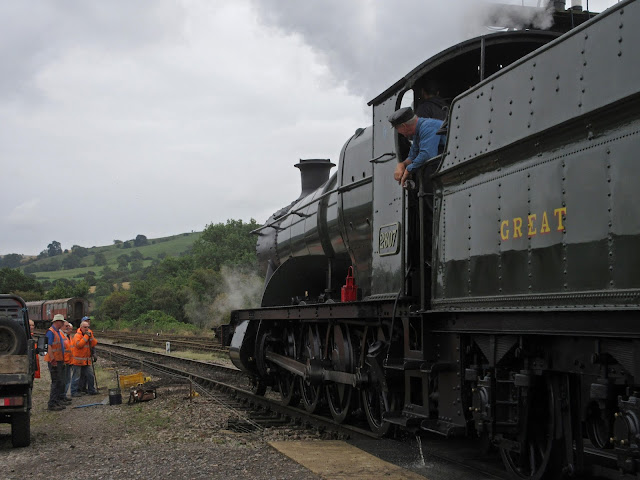 The tender says it all: GREAT ! It really is great to see these 100 ton machines rumble by so close up. That's what you get as a member of the track gang. You get to lean on a bar too, very relaxing, and you look busy as well.

Lunch time now. It's nice to be at Winchcombe, because you can sit round the table and benches at the end of the Coffepot and have a good natter. Then something strikes you about John's hat: 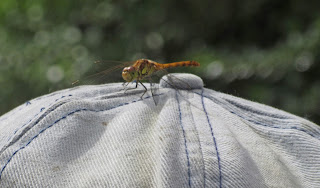 Er, John, don't move now, but there's a wee beastie on your hat. You had to admire John's courage, but he didn't move a muscle. Cool as a cucumber he was (or maybe a gherkin). The dragonfly preened itself for us to admire. 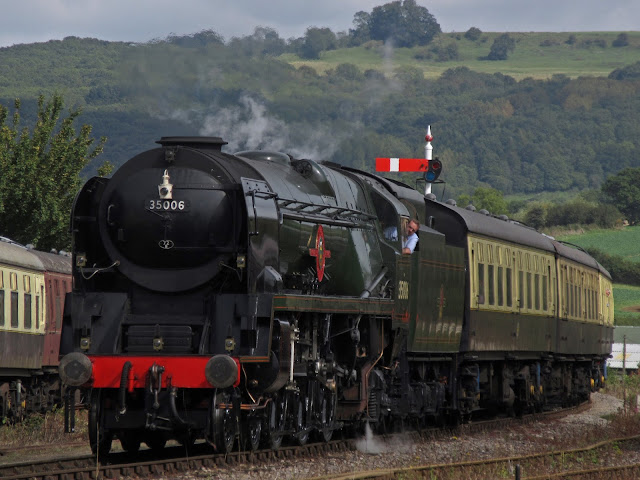 Isn't the zoom lens a great invention? 35006 seems to steam right out of the hills here. 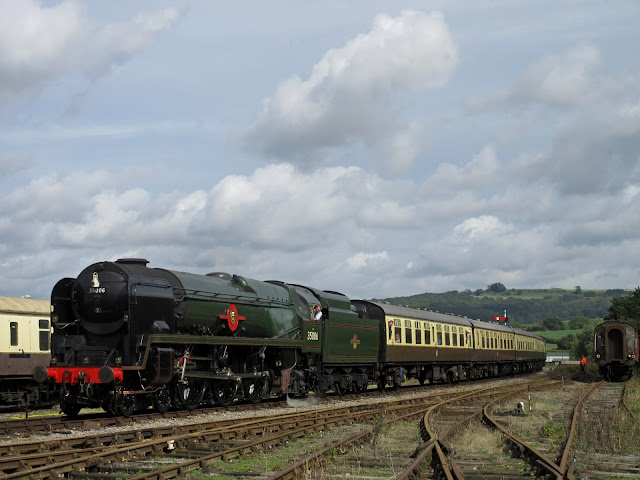 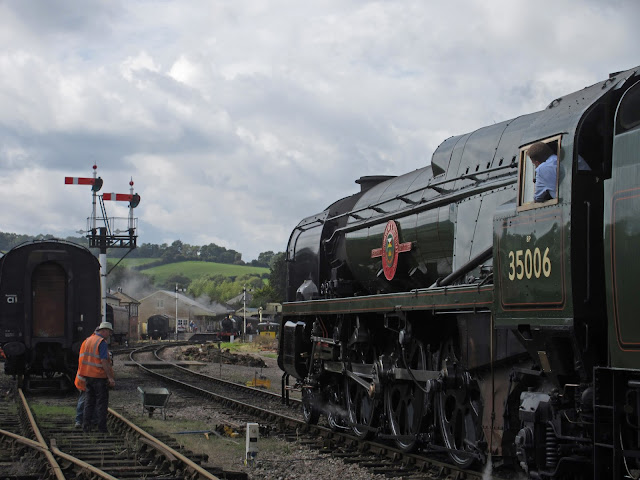 We stand back and let this beautiful machine glide by. 2807 has drawn in from CRC and is waiting for the road to clear in the background. Busy busy busy. 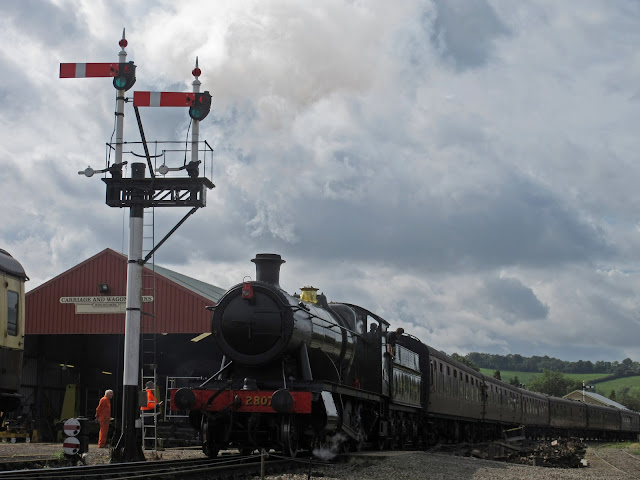 And there she goes! The road is clear and Toddington is still 2 miles away. The regulator is cracked open and she steams by under the home signal.

Mid afternoon, and we're a couple of men short. They have drifted off to the telehandler, where an intermediate greasing up session is due. This is facilitated by a brand new grease gun that actually works (whoo - hoo) but there is still a very large number of inaccessible places to attend to. 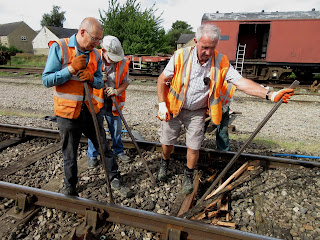 Meanwhile the sleeper replacement gang is still at it, trying to break the sleepers in half, this being the best way to get them out, without jacking the track up, which is discouraged when spot resleepering.

We changed 5 out of the 6 sleepers we set out to change today. Not bad, given the circumstances. 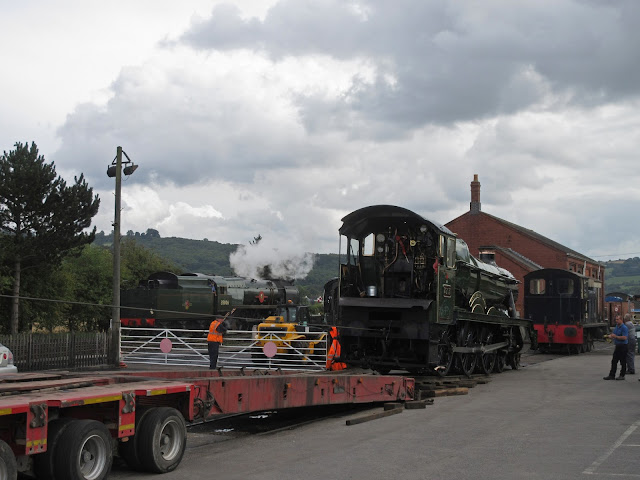 Back at Toddington to take the tools and scrap back, we were met with a surprise. Foremarke Hall was being winched on to a low loader. Where is it going to? Old Oak Common, where there's a last beano before they knock the old place down. It's only for a day, she'll be back again soon.
We sent our loco there absolutely spotless, well done those cleaners.

In the background, 35006 is manoeuvering to get back on shed, after a good day's running. One in, one out. 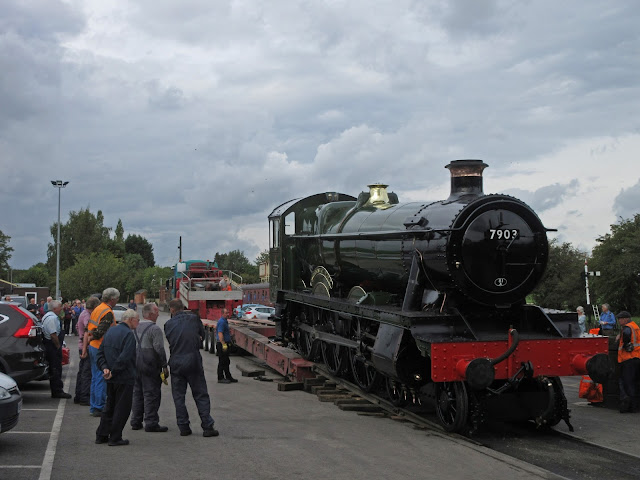 Here you can see just how shiny she is. What a great support crew they have.

Afterwards we took the Landie down to the 2807 coach to unload the 10 throughbolt chairs for them. They collect those chairs, unuseable here, to turn them into boot scapers. We noticed, next to some LMSR and BR (W) ones, a couple of genuine GWR ones. Those will be extra, we take it? 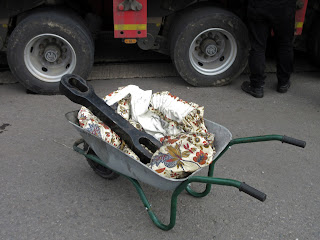 When you go on holiday with your steam loco, don't forget to take the key with you.


Finally, a little interesting oddity out there: 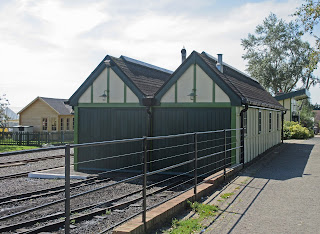 Here's a loco shed for a local narrow gauge railway. It looks quite convincing, doesn't it? But it's made out of two sea containers! Now that is a clever bit of disguise, and a sign of someone with some imagination. Well done, that man.