In this order then: 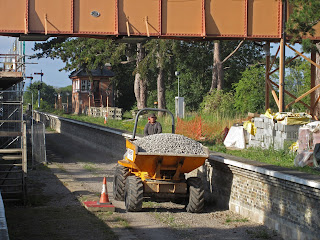 We had 100 tons of ballast delivered last week, and today Steve rode it up to the future pointwork at Broadway North. It didn't go very far, but far enough for us to resume extension work on Saturday. 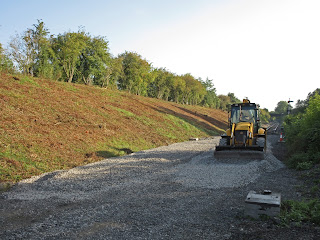 In this picture, the 100 tons have all been tipped. Can you see them? Where have they gone?

Steve here is spreading it all out, to make a base so that we can complete the two turnouts that are planned here.

The extension train has been brought up again with the necessary bits, including all the materials for the second turnout - loop to siding. 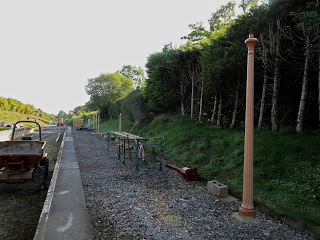 At the same time, two volunteers made a start on removing the last of the street lamp posts that were still in residence on platform 1. In this picture the last remaining street lamp posts stands towering over the replica ones further back. The replica replacement lies, in primer, just behind it. Steve is bustling about in the far distance. Until you say 'Tea up' that is! 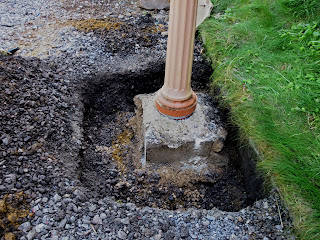 We've now taken all but this last one of the street lamps out. One of them even had an aluminium notice on it: 'No waiting between 8am and 6pm'

Now we will have the real thing, with our replica GWR castings. We are quite practised at doing this now, and soon there was a trench around it, and a test to see if it had a wobble yet. It did. 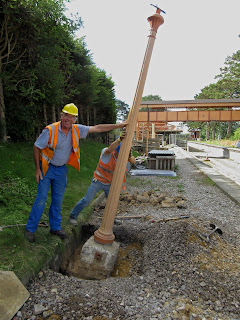 The Neal joined us, and sharpened the wobble test to a 'will it lean right over test' It did that too, so it's definitely on its way. Just need to carefully cut the ducting with the supply line through, ready for re-use later in one piece, please. 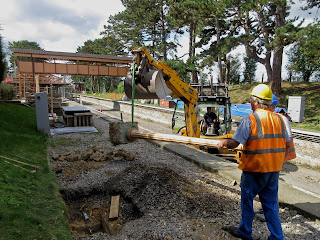 Napoleon once said ' I don't want my generals to be just good at battle, I want them to be lucky too' and so were we, as Steve came by and asked if we wanted any lifting done with his JCB. We certainly did! Those street lights are heavy, and while 3 people can just about carry one of the replicas around, the much taller street lamp posts are just too heavy.  We've got two of them for sale by the way, they're not much, and any proceeds go to the railway. We parked this one with its twin further up the platform.

With the lamp post gone, we had a big hole left in the platform here. This we filled with a former and a lean mix round it, which will make a socket for the replica that we will put in next time. That's a relatively simple job, and will complete the lamp post placement at Broadway. Were you one of the 10 sponsors? Then one of these is yours ! Thanks guys, this is what we did with your help.

Post removed, we went on to Hayles for a check up, and a re-supply of the delicious Hayles Fruit farm apple juice. 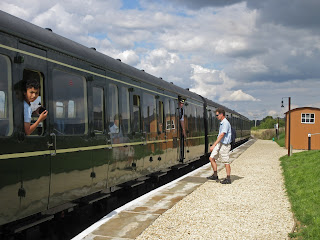 We were delighted to see a passenger there, waiting patiently for a DMU to stop. The passing 35006 with its train heading south raised little interest, as it wasn't going to stop. 10 minutes later the DMU did arrive, and a small wave was enough to get it to stop. Tickets please! 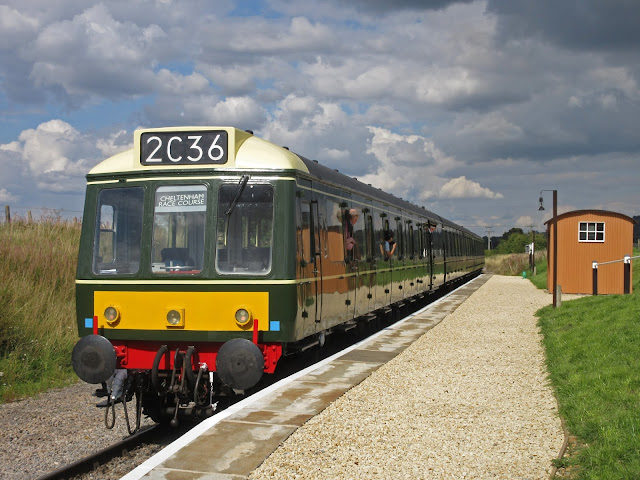 Quite a busy little halt this is. Other people had stopped to take photographs, certainly a good idea with the sunny weather we had today. After Hayles we had a look to see if we could spot Hayles Abbey halt from the hill above and to the south of the Abbey ruins. There's a lovely footpath that runs along the crest of it.
The sun didn't want to play ball for this picture, but you can see the Vale of Evesham stretching away to the horizon, and centre right you can make out the white triangular sheds of Toddington, and the line running south. 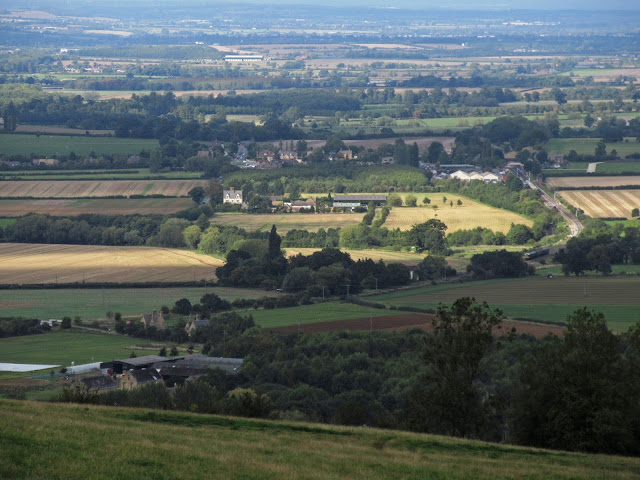 Just south of the sun here, centre right, you can see the DMU heading towards Winchcombe again. It's just between the bridges of Didbrook 1and 2, which is also the limit of the first ever operation of trains way back when we started in April 1984.

Track laying at Broadway resumes tomorrow, so tune in to see how we did.