Turnout completed, back on the straight

Our target for today was to complete the second turnout, and start laying plain track again. There was pressure on, as rain was forecast for later in the day. Would we make it? We'd certainly give it a damned good try! 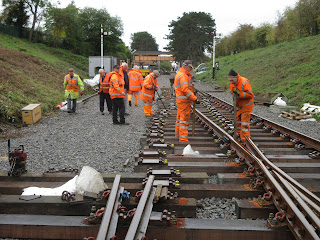 Where did we leave off?

Oh yes, we had built three quarters of the second turnout. Two closure rails remain to be inserted.

This is the opening shot today. 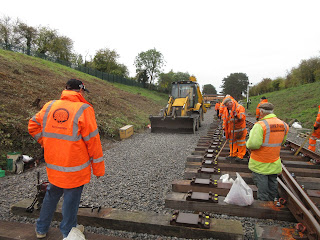 Steve came by to level and slightly drop the ballast bed on the down line, as from here on we will resume laying plain track, in concrete, up to the barrow crossing at the platform ends.

Between the barrow crossings, north and south, will be bullhead rail on hardwood sleepers. 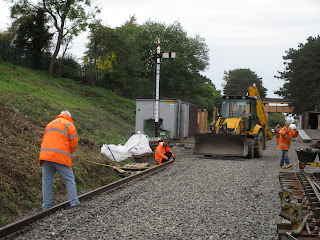 Having measured the gap for the closure rail, the rail intended for it, previously brought up, is marked up for cutting to size.

Measure twice, cut once. But even that has its pitfalls. Read on. 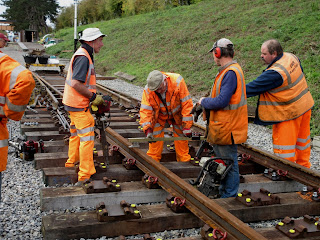 While the measuring and cutting was going on, the through road needed to be drilled and screwed down to finish it off. Gauge is particularly critical on a turnout, and here you can see Mike checking it carefully, before we drill holes in those valuable hardwood timbers. Nigel checks that the gauge is correctly set up. 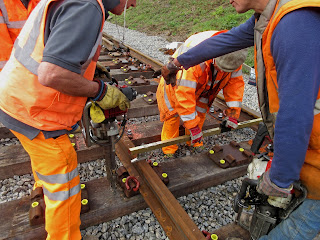 Sure that the track and base plates are in the right place, Alan on the left then drills the holes, allowing Phil on the right to quickly screw the plates down tight. 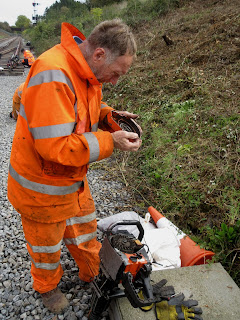 We have a second nut runner on the go, as with a different socket on the end they can be used to tighten down chair screws, or alternatively tighten the fishplate bolts.

With a turnout and its double track there are multiple points where a nut runner is needed, so Steve here fires up the second one.

Or not. The damned pull cord has gone again. Don't they always go just when you need them? 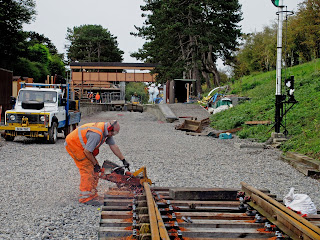 At the southern end of the turnout the two rail ends need to be cut off and re-drilled. Once they are level with each other, and with new holes, they are ready to receive plain track into the platforms.

There will be a barrow crossing at each end. 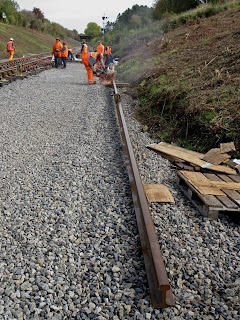 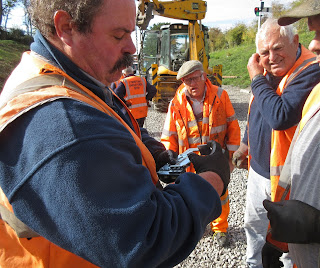 A new gauge has been sourced to measure the thickness of the second hand bullhead rail we are going to use through platform 2. To avoid the use of (too many) lifting fish plates, the second hand rails will be paired with similar rates of wear, and to do this you have to know the degree of wear on them. Hence the gauge.

In the meantime, Bert switched his attentions to the closure rail, which, having been measured and marked, is ready to be cut to length. 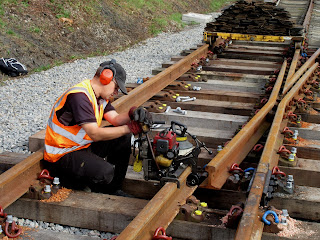 The first of the two closure rails was lifted in, and Leigh here is cutting the bolt holes in the end that was cut. 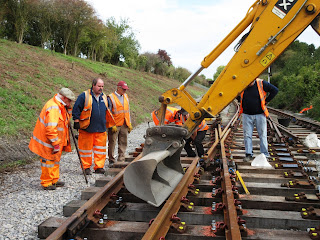 This turnout marks the start of the curve towards the platforms, so the closure rail needed to be curved as well.

Men with bars weren't enough to bend it sufficiently, so the JCB was asked to assist. Simple really.

That was the theory, but the practice was that even once bent, it wouldn't quite fit. Dang! And we measured it twice too. 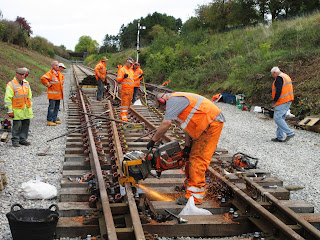 This was an embarrassment to the gang, we couldn't figure out what was wrong. We measured the gap again, and the closure rail that was cut to size, but all was correct. So why wouldn't it fit? What was going on?

After some head scratching, we figured it out. The nearest rail, to which it was to be bolted, had an angled end, at some time in its past it had been cut off crooked. So it wasn't square.

Bert cut off another 1/4 inch, and this time it went in. 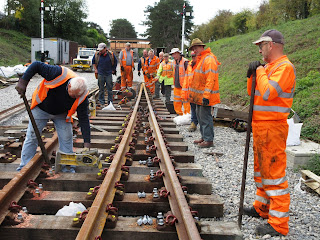 Rather than men with bars, we cheated a bit to get it curved correctly, and used a Duff jack. And why not?

It kept the rail in position, giving time to drill the holes for the chair screws and to bolt it down securely. 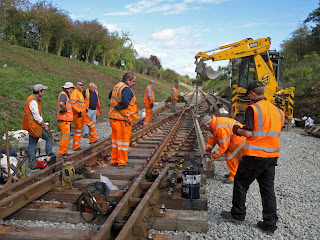 Then the other closure rail was lifted in. This one went in easily, and using the track gauge again we made sure it stuck to gauge with its twin on the other side, screwed it down.
Then we felt we deserved to break for lunch. 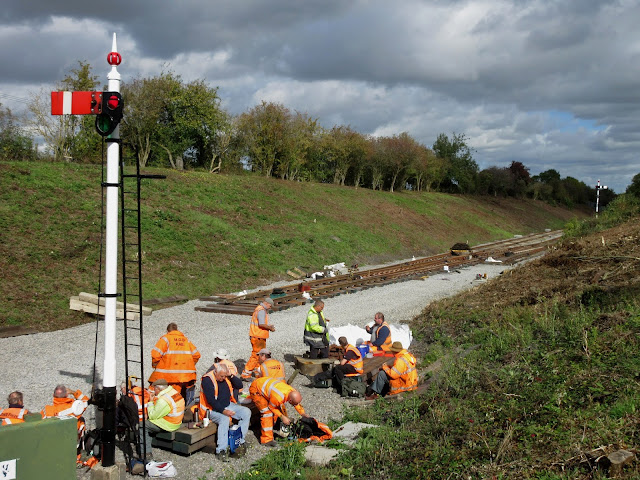 With our achievement behind us, we sat down on at our 'dining table' of spare point timbers and enjoyed a picnic in the now warm sunshine. Mrs. B treated us to a well filled sponge cake too.

Above, heavy clouds started to form, pointing to the rain that the forecast told us to expect. 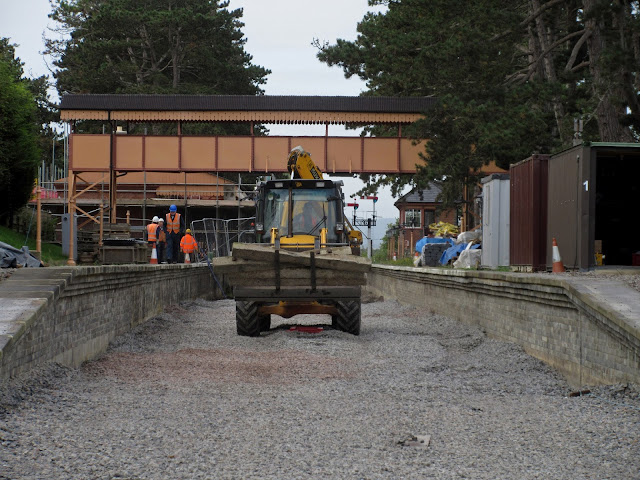 After lunch, with minor work still to go on the turnout but the rails now in, we decided to make a start on laying plain track again. Steve was dispatched to the Childswickham Road to get the first 4 concrete sleepers for this.

Here you see him traversing the newly installed stretch of fresh ballast between the platfoms, carefully astride of the catch pits so that the rings won't get disturbed by the passing wheels. 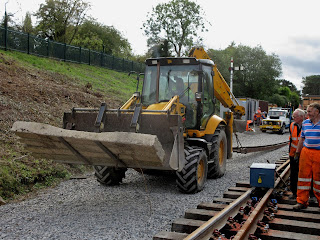 In true Stevie fashion, he not only brought 4 sleepers, but also an extra gift of two rails behind. Good on ya, Steve ! Don't waste those trips to the far end. 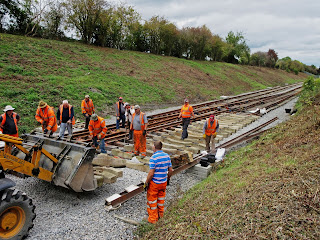 Quickly a line of concrete sleepers appeared on the down line (into platform 1).

Once we had 26 (equal to 7 trips down the trackbed to fetch them) we lined them up, and were ready to lay in the rails positioned on the right. 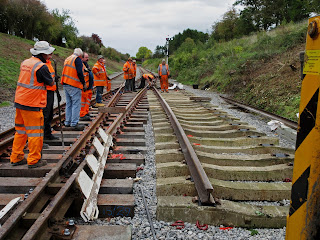 Hats started to appear because, the forecast was true, it now started to rain.

Just one more rail to go, quickly clip it up, and let's get out of here before we're soaked.

We did achieve our objective though. The rails on the second turnout are in. Some more minor drilling is required, and the checkrails need to go in. Not a big job. And we laid the first panel of plain track again, just as we hoped. Result!


So what's it look like now? Here are two end of the day shots to show how we are doing.

Rail sorting for the loop in bullhead, ready for transport by works train
More trackbed scraping, and replacement with fresh ballast