Piling in the ballast

After a day off on Monday, we were back with a vengance today, and spent all day shutteling ballast into the platforms. It's slow work, but bit by bit we are getting there. 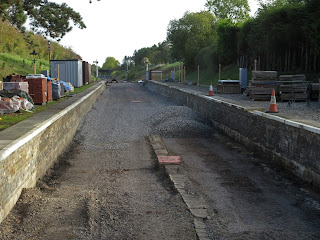 Our opening shot this morning, a bright but breezy day, with autumnal leaves billowing over the car park where we loaded. Behind the camera is the scaffolding, and ahead an area dug out earlier which we hadn't finished ballasting yet. 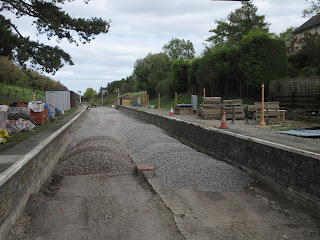 We resumed our ballast shuttles between the bottom car park and the trackbed by the station, steering carefully around the men from 'S and Teabreak' who had come to built a concrete raft opposite the box, under the platform overhang. 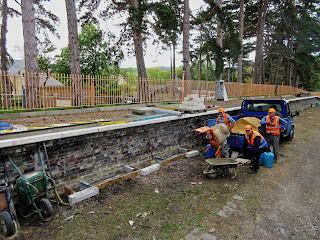 Here they are already mixing concrete. Note the action shot, the wheelbarrow poised to roar into action, but don't be fooled, it's a pose. There was a flurry of activity every time the dumper passed by, or so it seemed....

The shuttering is up, and inside are four 'C' section cut offs, which will be used to support pulley wheels to steer the pulling wires left and right once they leave the box through the tunnel. 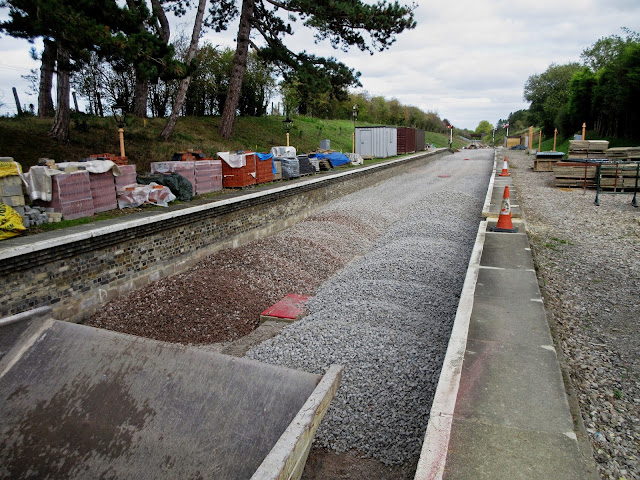 At the end of the morning the gap was filled in with ballast, and in the distance several more drops were made to alleviate a low spot that Steve detected. 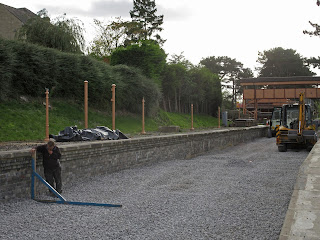 We have a gauge to work out the depth required, so here is Steve puzzling over just how far up (or down) the ballast level needs to be, depending on whether this is an area of wooden (a bit lower) or concrete (a bit higher) sleepers.

At the end of the day we were happy with this bit, there's enough for us to do on Saturday, provided we get another supply of concrete sleepers from Gotherington. 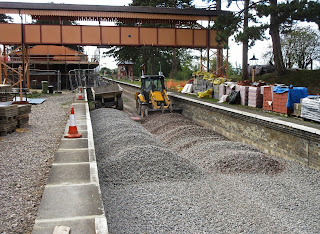 Steve then set about levelling all the ballast dropped in the first half of the day, remembering to leave an access ramp for Saturday's activities (ferrying in rails and sleepers).

14 pairs of used bullhead rails have been sorted out at Stanton. They will be loaded on to the supply train on Thursday and brought up to our unloading area at Childswickham. These second hand rails will be the first to go in between the platforms, and they will go into the loop. The through line will have new bullhead rail, and will be the second one to be laid. 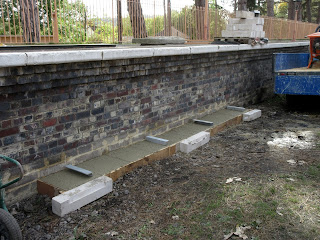 By mid afternoon, the S&T gang had finished their bit of concreting. Looks neat, doesn't it?


For an overview of today's ballasting we had a look from above, with a quick trip up to the scaffolding. This will be partly removed later next week, just enough to finally clear the trackbed. 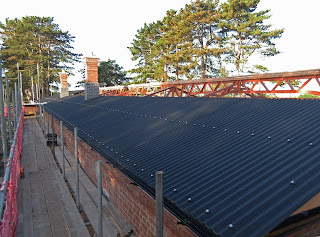 While up there, the work done by the canopy gang continues to impress. They've almost finished laying the corrugated iron sheets, with this lower row on the forecourt side now done all the way along, the same as on the trackbed side. 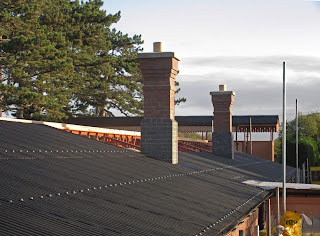 The line of replica chimneys gleams in the weak autumn sun.

Just the strip along the top on the forecourt side now remains to be completed. It's about 1/3 of the way along here. The chimneys await the flashing to completely waterproof this side. 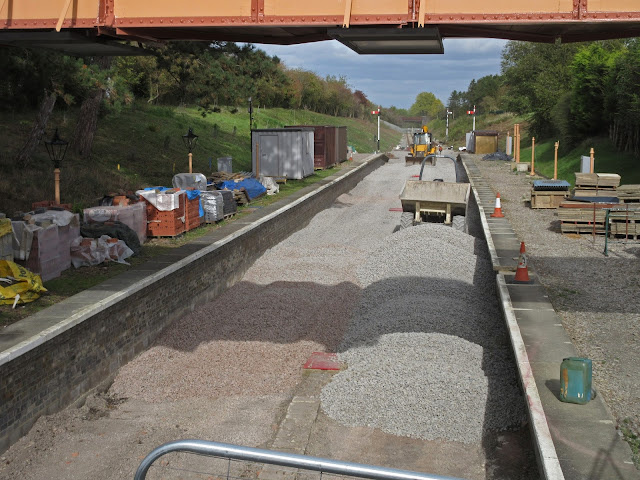 This is the overview from above then. You can see that the ballast piles have almost reached the scaffolding, and that we have infilled 3 of the 8 stretches between catch pits, so we're a bit under half way now.

We're probably going to finish the spoilt ballast removal in the week after the scaffolding is pruned back.

Finally, a bit of heritage news. Along the way of the Broadway construction project we've been on the lookout for bits of heritage kit that makes a typical GWR station complete. We've got most of the door plates now, and a number of 'V' boards, although not all. We'd still be interested in any offers of cast iron GWR letters, especially the 4 inch size for the V boards, if anyone has any that they could donate or sell. We could also do with 2 of the pointing hands which go with the hanging WAY OUT signs.

One sign that seemed to elude us for quite a long time, strangely, was a cast iron GWR 'BEWARE of TRAINS'. They must have been used for any of the many foot crossings on the old railway, but today they are few and far between. At Broadway we need 4 of them, two for each of the two barrow crossings that will be located at opposite ends of the platforms.

Yesterday we were finally able to source an original, thanks to the kindness of a GWSR supporter.
This is what it looks like:
Now that we have an original, we can have copies made for the platforms, and the original can be safely kept in a museum. Four bullhead rail posts have also been ordered from Steve (if he doesn't forget!)