Two gangs set off from the mess coach today. One to continue with sorting out the levels on the shed roads 6, 10 and 11, while the other gang repaired to Winchcombe to start preparing the wooden sleepers for the platforms at Broadway. 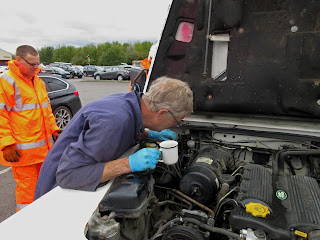 The Landie is still off sick with clutch problems, which a helping of hydraulic oil did not manage to cure. 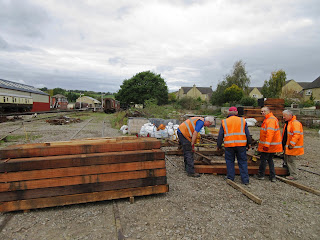 At Winchcombe the newly ordered supplies of hardwood sleepers have started to arrive. Half of the gang set up a jig whereby these could have their cast iron chairs attached and screwed down. 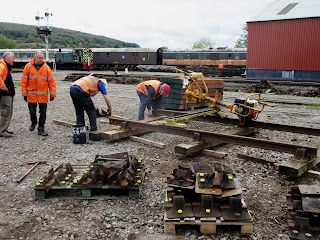 A short piece of fake track was set up, on which the motorised Geismar chair screw machine could be installed.

On the K&ESR railway, this was known as the 'knurdler', although there must be a more professional term for it. 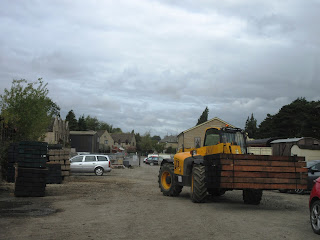 Out by the entrance to the yard the new supplies of both concrete and hardwood sleepers have been unloaded, and the Telehandler here was dispatched to fetch supplies for the chair fixing crew. The use of the Telehandler turned out to be a tad optimistic, as progress was slow and only one such stack was required in the morning. No doubt things accelerated during the day. 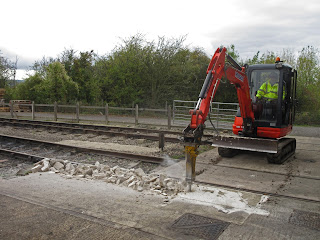 Back at Toddington the other gang started work on correcting the levels of the approach roads to the diesel shed. These were found to vary quite a bit in height over short stretches of track, with the last few feet outside the doors diving downwards. To correct this, one stretch of concrete had to be removed, to allow us to pack the sleepers underneath and get the levels correct. A pecker was hired in for the day. 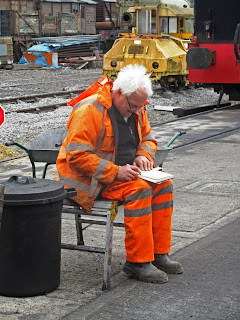 Luckily, in a wide pallate of volunteers you have a good chance of finding some one with the skills required, and we are very lucky to be able to make use of the skills of Peter, a retired engineer.

The two shed roads were measured for height from a fixed point, and the different results noted down.

Here Peter is translating this onto a sort of graph, which shows the undulations of the track (which the large, bogied diesel locos that come in and out here don't like very much). 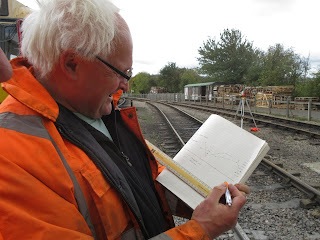 The result of the measurements is this 'graph', if you like. It shows how the two rails on the 11th road go up and down, and even exchange positions in height!


While most of the issues could be solved by jacking and packing, one area, close to the current apron, was too high on the Malvern side.

Too high is bad news. It is very difficult to lower track, once in place. Our plan was to loosen the concrete sleepers, dig out the adjacent crib, move them across, and then dig out the bed underneath, before moving the sleepers back into their original positions. 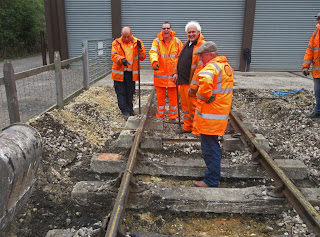 The best laid plans of mice and men.... Clive finds the reason one area was higher than the rest - it lay on a row of rocks.

His colleagues were only too willing to point out to him the way forward - dig out the rocks! 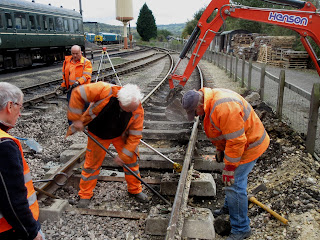 The rocks were attacked with a Kango hammer and a crow bar to break them up.

The plan to move the sleepers sideways also ran into a spot of difficulty. Four sleepers were bullhead on chairs (fine) but four more, before the apron started, were modern blocks, supporting flat bottom rail with high tech fastclips.

Unfortunately our low tech tools were not suited to getting them off. No one had ever done it before, so we were reduced to digging out the bed from underneath each sleeper. 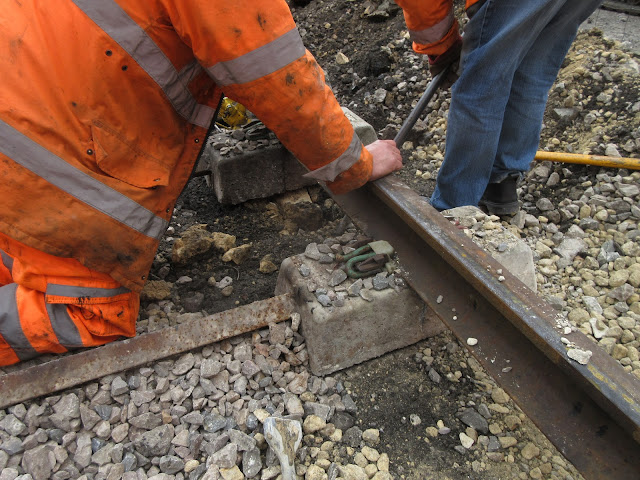 In this picture you can see one of the rocks directly underneath a sleeper. It is being levered out with a crow bar, after being broken up by stabbing at it.
A green coloured fastclip can be seen in the foreground. No doubt there is a special tool for this, but we don't have it... too modern for us, we're a railway museum you know. 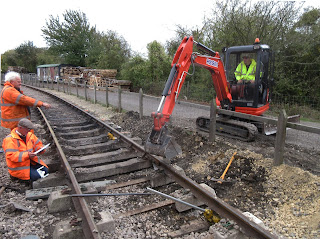 Our pecker fitted mini digger was converted into a proper digger and it helped us dig out the cribs between the sleepers.
At the end of the day we were a bit at the end of our tether, but were pleased to be able to say that we had successfully dropped this rail down to its correct level. It now needs a fair bit of fresh ballast to fill the gaps again, and allow us to pack it properly with railway ballast, rather than with rocks and dirt. 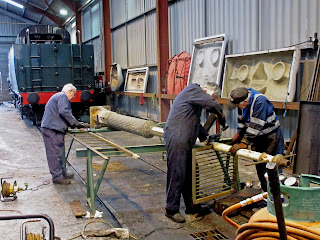 Inside the shed the GWR yard lamp acquired last year by yours truly was being cleaned and made ready for painting. Good news! It should go up in the spring, situated south of the water tower in the yard. It was fully disassembled and was being cleaned up ready for a first coat of paint in this picture. 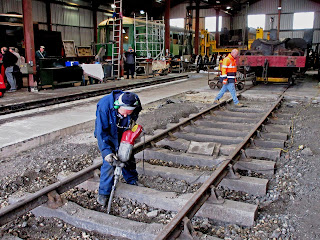 Shed road No. 6 was also being worked on, by a joint group of PWay and loco dept members.

Here the track laid last week is being professionally packed with a kango hammer. The PWay dept working on road No.10 were so impressed by this machine that they 'borrowed' it for the rest of the day. Brazen cheek, but that's how you get things done. 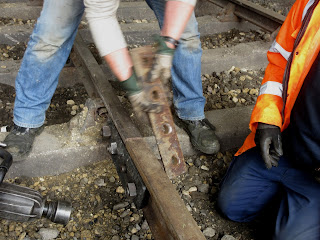 Although the track laid last week was plated up, we were not happy with the heights between the differently worn rails, so an expedition was sent to Winchcombe to find some 'lifters'.

Three good lifters were found, and duly installed to achieve a nice smooth running rail, before everything is concreted in for good.

The old straight fishplate is still good for use as a hammer to get the bolts through. 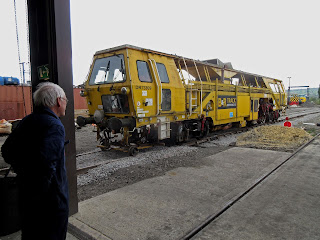 After replacing some fish plates and completing the packing inside the shed, the tamper was fired up and it slowly worked its way up the approach road, watched by a member of the loco dept. 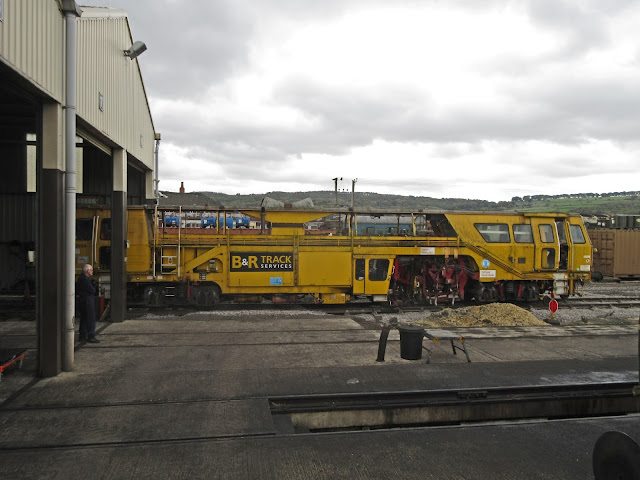 The tamper then stuck its nose into the shed, so that the tines could be used right up to the door.
We then retired to the Flag & Whistle' for a closing cup of tea and a natter.

Quote of the day: