One went south to Winchcombe, to prepare for the delivery of hardwood sleepers next week.
The other half went north to Broadway, to continue laying plain track away from the two turnouts. 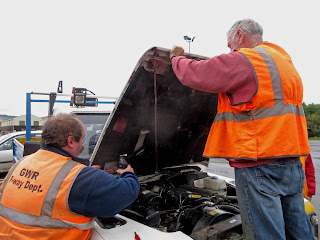 First thing to do was to give the thristy Landie a cocktail drink of invigorating hydraulic oil.

Sadly, it didn't invigorate very much, because the clutch problem remained. Possibly a new cylinder is required? 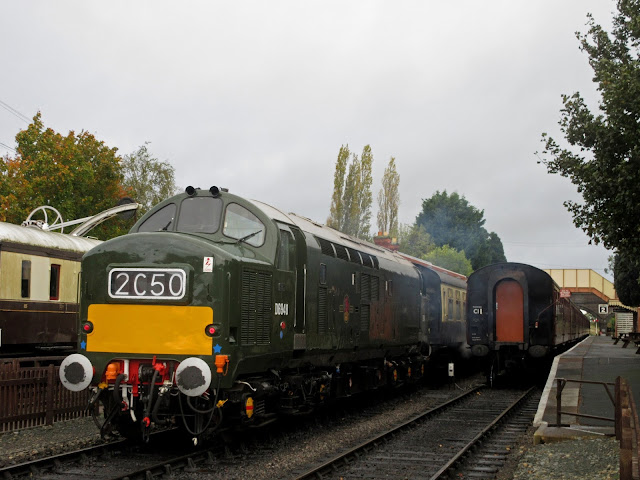 We've got an extra big picture of the class 37 here today, as today was diesel day and the old girl was seen here in front of a rake of carriages, enveloped in a cloud of steam. Of steam? Yes, it had steam carriage heating! 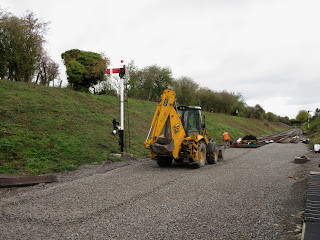 With the gang scattering in opposite directions, half of us went to Broadway and found Steve here raking out the ballast to get it a few inches lower for the taller concrete sleepers that we will lay here, up to the barrow crossing.

The splitting of the gang brought an anxious moment for us - which way would Mr. B's cakes go? Nigel seemed to have gone south, and the northern gang was getting edgy with withdrawal symptoms. 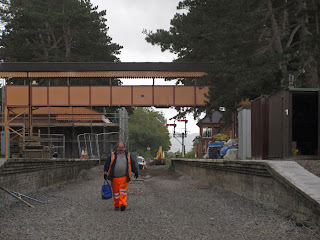 Then a figure emerged out of the morning drizzle bearing a familiar carrier bag. Relief! Two boxes of cake - two halves of the gang. Of course. It stands to reason. 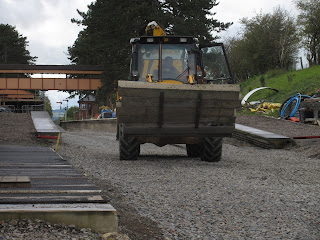 Shortly afterwards Steve appeared with the first load of sleepers. We had a bit of a logistical issue today, as the remaining 200 odd sleepers were at Gotherington, and we were at Broadway. Unfortunately what with the running of trains (damn them) and some holiday absences it proved impossible to bring the last supplies up to Broadway for this Saturday.

All this will change next week, as a large supply of both new hardwood, and second hand concretes has been ordered for the platform roads, and will be delivered early next week. Bullhead rail is also due for the through road between the platforms. 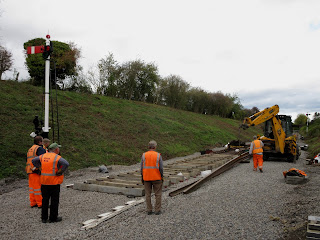 We laid out 26 of the concretes, and Steve was soon lifting in the first of the rails. 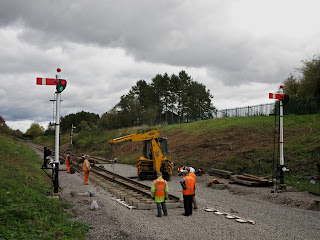 The second followed soon behind. So doing the track has now reached the level of the starter signals. 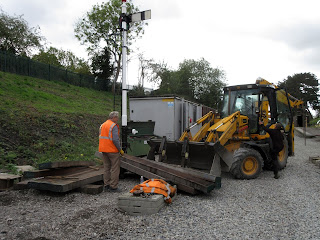 It was then realised that the advancing track was going to make recovery of a small supply of hardwoods very difficult, so we quickly loaded these on to the JCB and took them out of the way back south. We have to tidy up as we go along. This had consequences though, because where would we sit now to have our lunch? 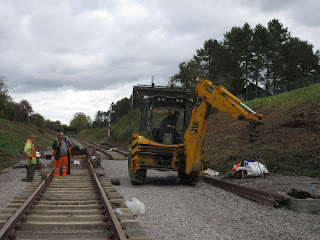 Steve then fetched two more rails, destined for the through road, which is trying to catch up with the advancing loop line.

Here he has dragged them as far as he can, and has turned the JCB round so that the back acter faces south, and the rails can be pulled further up from behind.


Then along came lunch time. Where to sit now? Idea: Let's sit in the Broadway cabin, quick, before they get here! 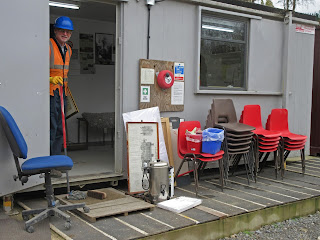 After we had left the cabin to go back to work, we noticed that a deep cleaning action had been started by the Broadway gang. Were we that bad? 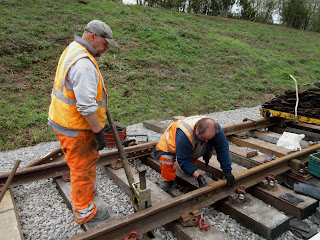 Having laid in the first pair of rails, it was time to link them to the end of the turnout with a set of fish plates. Everything was already fitted with holes, so they went on PDQ. 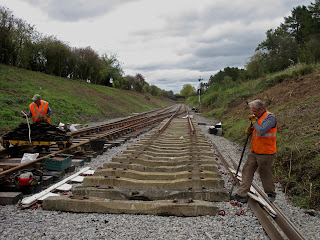 Then we decided to lay a second length on the through road, to keep up with the first. These sleepers were slightly different (so many are) and we therefore kept them on a separate length.
Here Ivor is barring them this way and that, in order to get a nice straight length so that we can drop in the rails that Steve brought down earlier (on the right here). 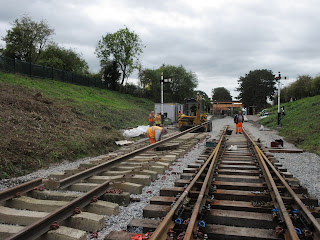 In goes the first of the two lengths, again using a pivot in the centre, with which we managed to lift in the rail from the far end. Very clever. 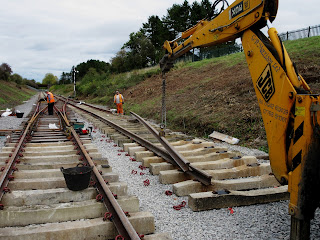 We now have some double track leading away from the two turnouts here. 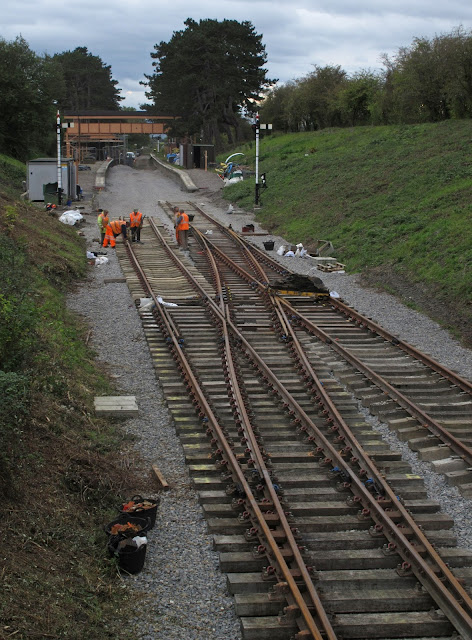 To get a picture of what we did, we now have to climb the home signal (the one with the route indicator box for the Honeybourne direction) and turn the other way.
This is the view south, showing the two lengths we put in today. We didn't do any more than that, because we had only half a gang, and because we ran out of available sleepers at Broadway to use. 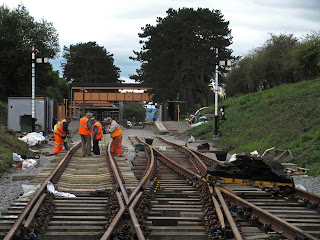 From ground level you can see the proximity to the platforms, and how the Cotswolds side rail starts to curve. The gang is just clipping up here, a slow process involving a lot of barring, lifting, banging and, yes, cursing. Luckily you can't hear that on a blog.

A couple of extra shots from the platforms:


What's also apparent is that we've reached the BAG cabin, so they get a grandstand view when they have their lunch. 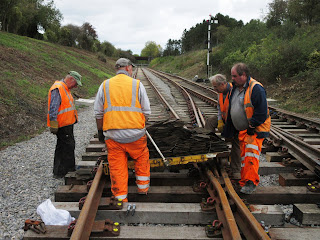 We then tidied up the tools, and before leaving, rescued the trolley which some idiot (ahum) managed to derail on the crossing.

Luckily it emerged that it derailed because the check rails weren't in yet, not because of incompetence (this time). 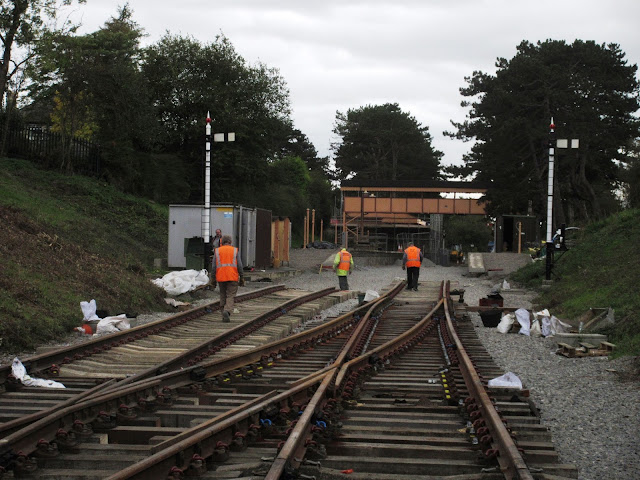 A last look at today's work. It's very pleasing to see the slight curve introduced so that the trackwork starts to follow the curve through the platforms. It'll still need a bit of tweaking to get it precisely right though. 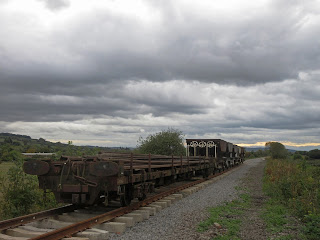 To close off, a quick look at the supply train stabled just below the Childswickham Road bridge. 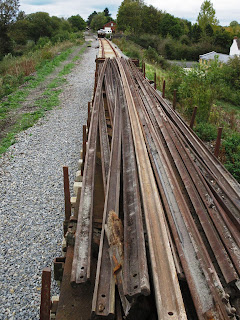 This bogie flat was loaded on Thursday with the 14 pairs of second hand bullhead rail that we sorted out at Stanton.

We only need 13 pairs to get through the platforms, and the 14th is there to cover for all the ends that we will be cutting off, to make sure that the remaining rail is nice and straight.

We're going to have the through road in new bullhead, and the loop in second hand. It saves on costs, and the money saved enables us to carry on with some other vital ongoing investments recently outlined on the Boardroom blog. All very exciting, isn't it? 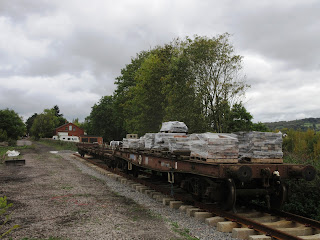 This wagon is going to go the other way. It's been loaded with all the surplus Broadway building materials that were stored on the trackbed.
That part of the scaffolding that rests on the trackbed is going to be removed on Thursday next week. This will, finally, give the PWay dept the complete possession it needs to lay the track through the platforms. It's all coming together!
Posted by Jo at 19:10