The track and station gangs are now almost adjacent to each other, and now often use the same mess facilities. Today both groups were at work

By the goods shed work continued in tidying up the stretch of fence line cleared earlier in the week. 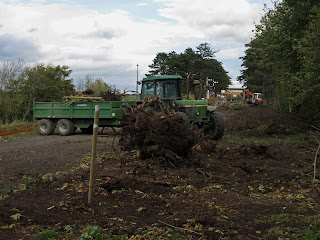 Steve brought a tractor and trailer to take away the debris.

In the foreground is a huge tree stump. At the end of the day it too had been cleared.

The stake shows where new the fence will go, and the materials for it arrived mid afternoon. 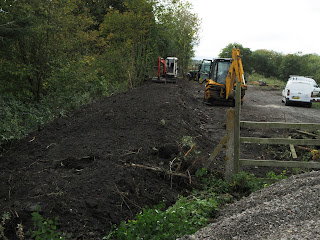 The mini digger continued levelling and lengthening the bund on the Cotswolds side. More and more blues are turning up in it. It looks like the debris from one of the cleared platforms - none were left after closure, they were all grubbed out and we had to start all over again. 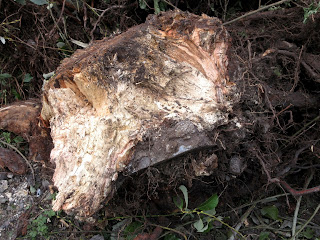 How long has this stuff been lying here? Well, take a look at this brick at the bottom of this stump. It is completeley enveloped by a tree root - that doesn't happen overnight. 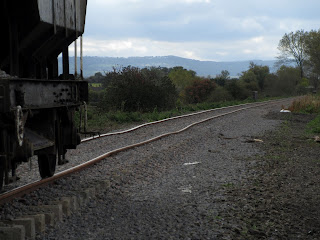 As the tamper was out yesterday, we had a quick look to see how far it had come.

You can see how it stopped a few yards short of the extension train - the nice smooth rails suddenly become wobbly. It did a good job yesterday. 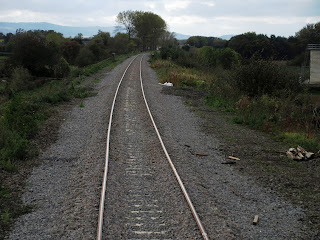 From above you get a different perspective. The tamper stopped just below the centre of the picture, behind it a nice smooth curve.

Today the tamper was working on the running part of the extension, to iron out a few dips arising from soft ground underneath the track, where the embankment had been dug out to replace a drain. 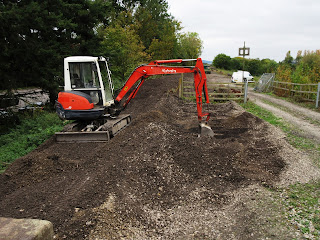 Later in the day the mini digger had reached the site of the former signal box. The new fence will run along the LH side of this bund here, while the new main line will be located where the bucket is in the picture. The loop will go through the gate.

That gate and fence across the trackbed will come out soon. Then it will look like a railway line again.

Mid morning a call came from the station gang for an extra pair of hands please. We were happy to oblige. 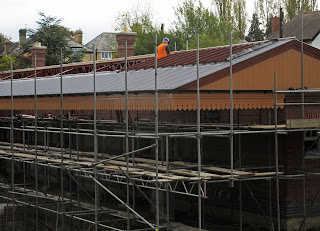 We found the scaffolding in the course of being pruned back, and up on the roof a contractor was placing glazing bars in the strip that will have glass panels in it. This went on pretty quickly. 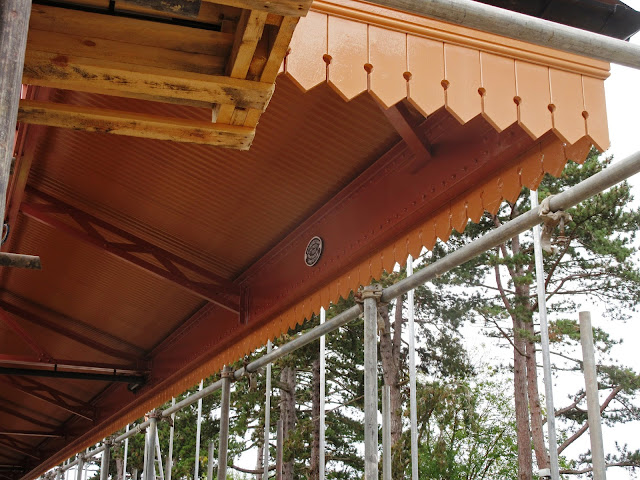 All morning long the scaffolders were removing planks and poles, and slowly the veiled lady was being revealed. Here is a view of the fascia board from underneath, with the E Finch, Chepstow, 1903 worksplate giving a welcome relief to all the light and dark stone surfaces here. 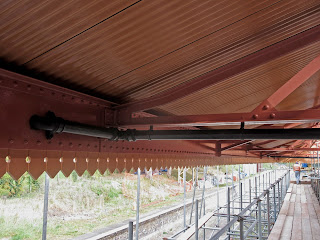 Underneath you can now see more detail, previously hidden by the scaffolding boards.

This is how the down pipes have been laid, through the fascia board and then along under a truss. 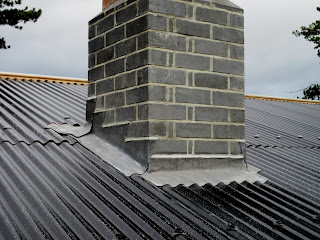 On the other side the first, operating, chimney has had its flashing fitted, and this end of the canopy is now watertight on the forecourt side. The second chimney is WIP, and once done, the rest of the sheeting will be fitted to complete the sheeting job. 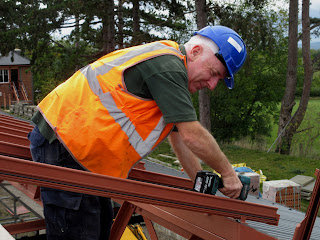 The glazing bars being fitted here are from a  specialist company that has done dozens of roofs for Network Rail, including Dover Marine station.

Their design and colour scheme are a faithful copy of GWR practice. 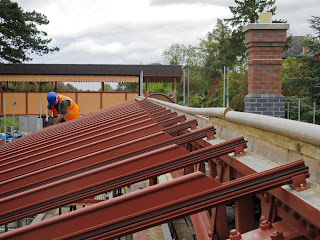 Fitting of the glazing bars advanced at a rate of knots today, we were quite taken by the speed of progress.

Here the contractor has almost finished installing the glazing bars and is working on the last few at the northern end.

The bend in the round 'mop handles' on the right is caused by the need to raise them to accommodate the glazing bars, as they were installed too low to start with. 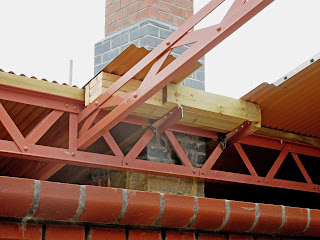 Round the back of the chimney a solution was found to support the flashing and sheet ends behind it. Copied from Toddington and Hall Green. 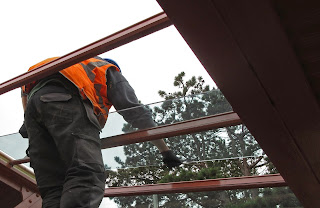 The extra pair of hands that was required was to pass up the individual sheets of glass from storage inside the building shell.

This was a delicate operation, as the long and fragile (albeit laminated) sheets had to pass through a hurdle course between steel scaffolding poles and wooden planks to the highest part of the canopy.

The special greenish tint of the glass enhanced the colour of the sky above, we noticed. 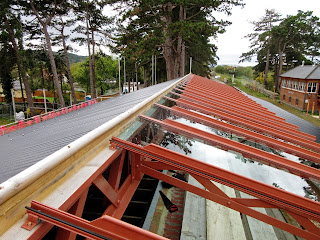 With about 20 sheets installed, it was time for a look from above. This is what you can see. After this length of glass was installed, it was also noticeable up there that it felt quite warm under the glass, despite the strong winds today. Nice. 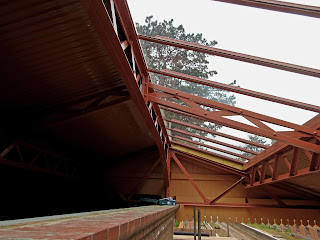 From underneath the glass, once up, looks perfectly natural, despite its greenish tinge, which we are told, is the colour it was in Victorian times. 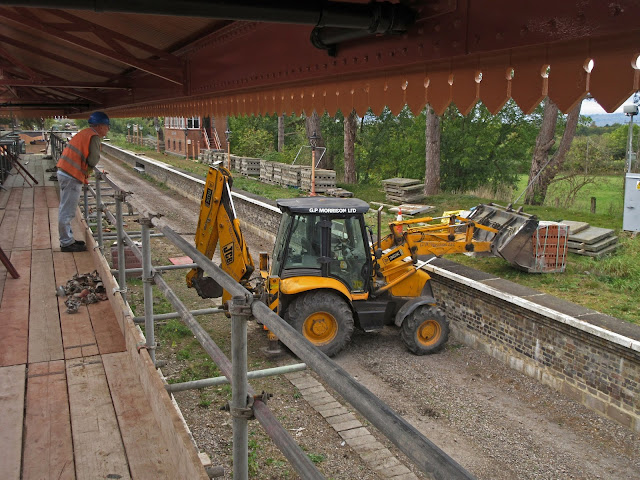 After lunch the scaffolders left, having removed the front part of the scaffolding. A two stage scaffold is left, of which the lower level can be seen on the left. It makes a handy viewpoint over the trackbed.
Stevie had been itching all week to get at the three piles of new bricks still left underneath and today, finally, he was able to get at them and shift them off the trackbed. Yessss !!! 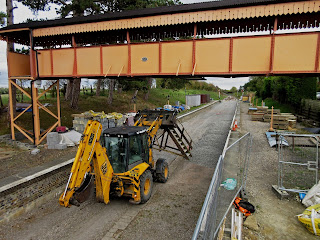 Steve also grabbed the steps, and took them away to be laid further along on platform 1. They have served their purpose now. The road is now clear for the trackbed clearance of spoilt ballast to be completed, and replaced with new.

That will happen next week. 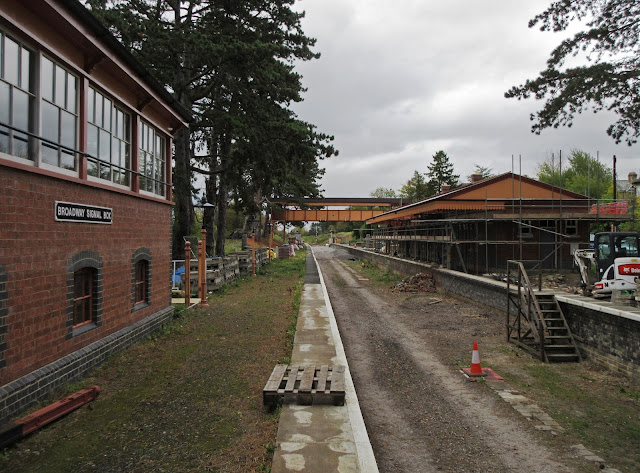 To close off, here are three pictures of the lady unveiled. She's starting to look rather like Toddington now, with the edge of the canopy overhanging the platform slabs here.
The gutters should be dark stone rather than black; we'll pick that up at the first repaint.
The trackbed is free at last, just a pile of broken bricks remains to be removed. 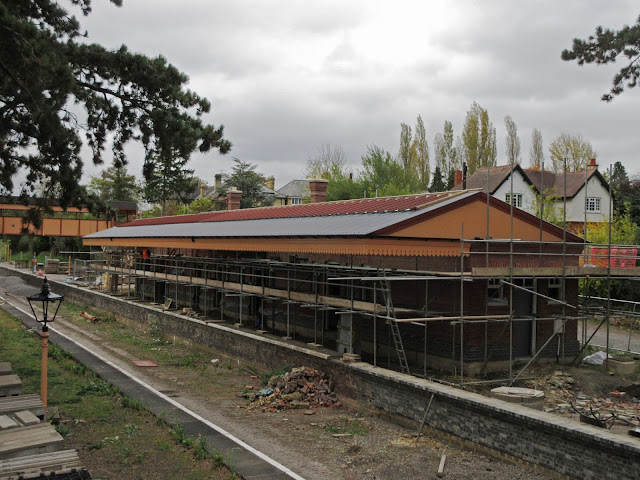 Here's the lady with her veil removed. Just the rest of the scaffolding to go; it will come down in a couple of weeks.
Along the glazing strip you can just make out that the glass panels have +/- reached the half way point. The flashing at this end had to be removed as it was too low, and still needs replacing. 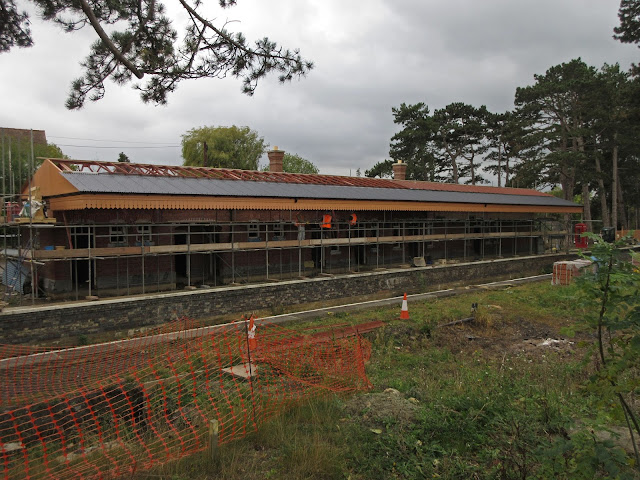 A last shot from the other end. Work was just winding down at the end of the day, and the glazing contractors (centre) stood back and admired their work.
All the glazing bars are in, and just under half of the glass. The rest will almost certainly be finished tomorrow.
What remains then on the canopy is the final stretch of corrugated sheets from the northern chimney to the end, the flashing on the second chimney, and the waterproofing of the ridge.