On shed, and out in the field

On this warm but grey day a pleasingly large number of seventeen volunteers came to Toddington, to play 'find the mess coach'. Troublesome trucks had ursurped its place in the Parlour Road, and we had to hunt around to find it. It was behind the steam shed! See, that wasn't so hard.

As Foremarke Hall rumbled off shed, PWay volunteers found someone had parked some wheels on the bit of track we were laying. Oi! Luckily the mess coach was right next door, so we didn't have far to walk.

Today was the first day of the winter season in which maitre d' Paul is cooking again.
What's cooking today, Paul?
''Faggots! And I'm in a bad mood''.

Paul had told and told the members of the gang that he needed to bring the food with him (our freezer is at Winchcombe) and that they had to register on Doodle beforehand to know the exact numbers for which he would buy in.

Paul very graciously then declined to eat, so that all 17 volunteers could have theirs. Julian had a brainwave, got a spare plate and went round the room collecting contributions. Everyone gave something, a potato, a forkful of peas, a slice of faggot. And so Paul ate too. 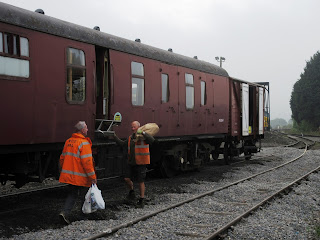 An important moment in our day - the potatoes are delivered by Rick, while Paul follows close behind with the (16!) faggots.

After our morning briefing we split into two gangs. One went to Peasebrook, where Martin had taken the Jacker Packer first thing in the morning. Here they spent the day lifting and packing the worst dips in the last 1000m of CWR to be stressed. This will make life easier for the tamper, which will have less work to do and can crack on. The tamper is pencilled in to arrive on Monday.

The other half of the gang remained at Toddington, where, with Stevie, we carried on installing road 6 into the shed. 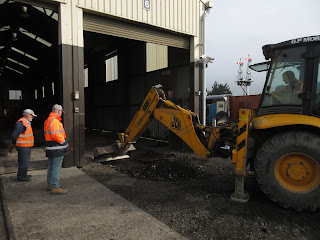 This time Steve was able to come first thing, so we got going straight away. His first job was to scrape out and extend the bed inside the shed. 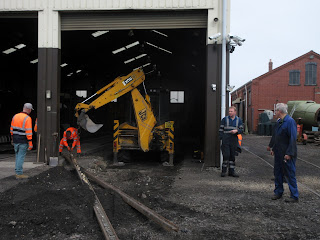 The mess coach was then moved to road 6, to clear road 5 which Steve needed to use to get at the rails and sleepers we needed to relay.

Here he is with the pair we will lay inside the shed. To get them further inside is tricky. 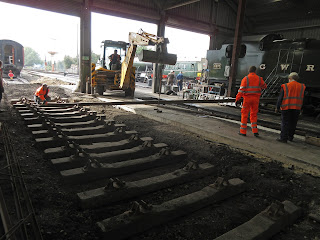 Steve got them half in, the turned round and pushed them the rest of the way in. He then managed to squeeeeeze the JCB between the shed door and the pit, and using the chains, was able to lift the rail over on to the Cotswolds side. It all went quite well in the end. 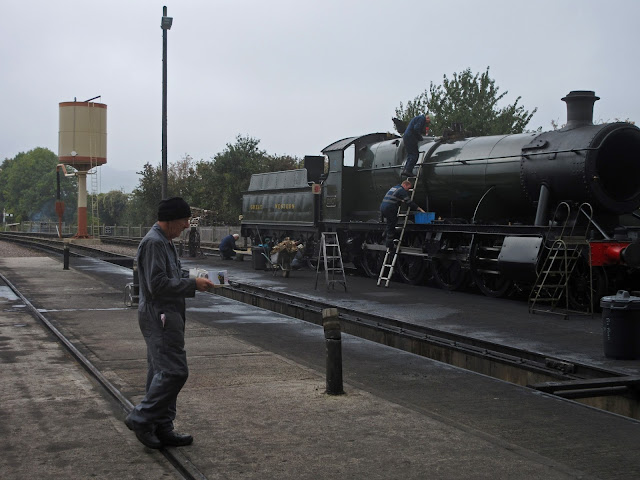 Outside 2807 was undergoing a steam test, and for this a tray full of hot water (with tea bags in it) was brought over at about elevenses. 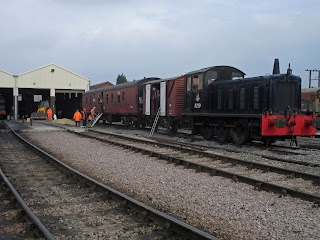 To get the mess coach and van over from road 5 to 6, we had our own little train, headed by the yard shunter.

Steve then got the remaining sleepers. A lot of time was spent getting them low enough, and measuring levels this way and that. Quite a slow job there.

It was decided to fill the gap outside next time, as we wouldn't have enough time to complete the job in one day, and we didn't want to leave a gap where the loco guys were walking an driving about.

Al this was surveyed by maitre d' Paul from the back of the mess coach. With 4 gas rings on the go, it was hellishly hot in there, and refreshment was needed.

We do not know what brought on his pensive mood. 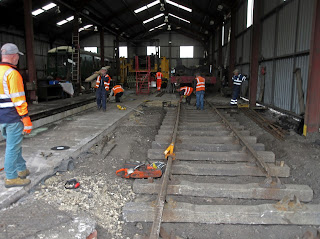 After the communal lunch we resumed work in the shed, where the rails were now in, but the fishplates left for us in a wheelbarrow were reluctant to go on. We discovered that two would have holes with different spacings, which themselves would be different from those on the rail. That's what you get when you work with second hand material, it's not nearly as fast as working with new in a systematic way. Eventually we got one set on. Now for the Mills keys with dirty rail in dirty chairs. All this was previously buried in the shed, and was taken out to be relaid and then concreted once and for all. It took 4 of us to get one Mills key in, levering the sleeper and its next door stablemate upwards so that the rail could be barred over properly into the chair. 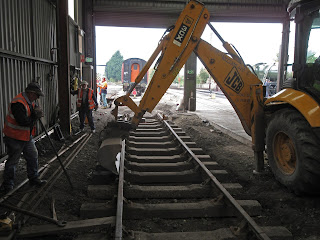 Then came the 'tweaking' bit. Of course the bit of track we laid was not parallel to the road next to it, and it refused to be barred across. We had to get the big guns out (i.e. the JCB) to move the track into position. Once encased in concrete, people will be looking at it for a very long time, so we didn't want any kinks in it.

We measured from all sorts of presumably fixed points, to arrive at a consensus for height.

This did result in some head scratching. 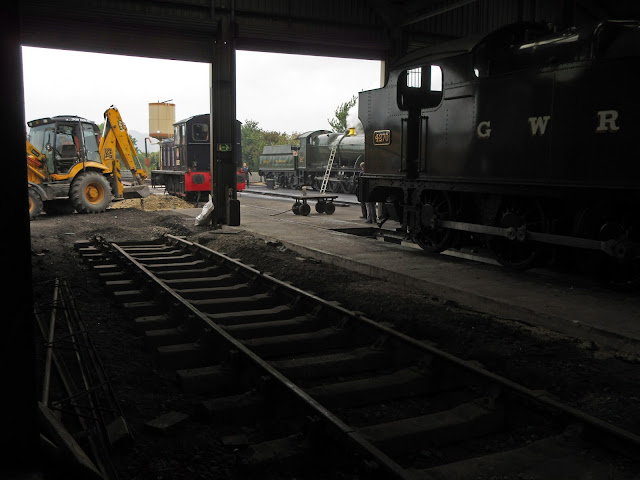 At the end of the day we had to stop as the rail saw had run out of fuel, and the petrol can was with the guys at Peasebrook. We got one rail end sawn off, to match the other. Next week we will saw the two closing rails to length to suit. No more time for that today though.
In the background 2807 has finally reached full pressure and has started to blow off.