Getting ready for more track

More preparatory work today, to get ready for the next push of track laying. 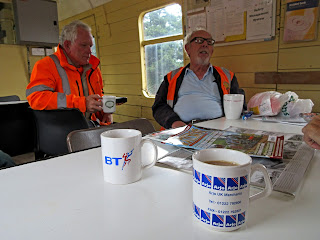 First things first, tea in the mess coach, and one of John's interminable shaggy dog stories. At least Paul's face says it's interminable. Tea's getting cold too.

Lots of hissing outside... 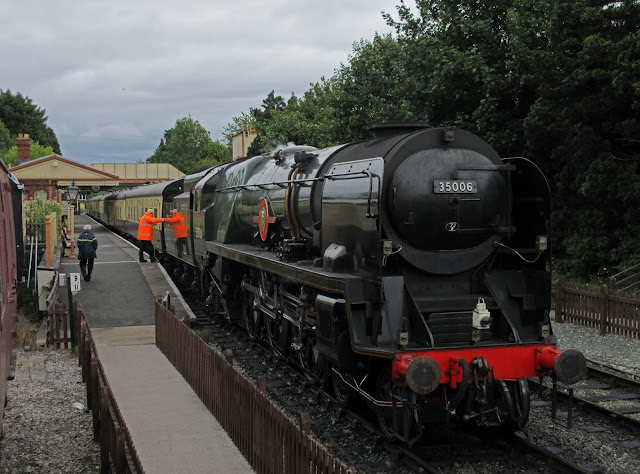 It's P&O, back in service with us. Many of us in the mess coach confessed to a secret admiration for this huge loco, even if its GWR links are admittedly very thin.
Just look at the shine on that tender, it looks like the guard is shaking hands with himself. Behind the sky is grey and gloomy, it was a drizzly wet day. Plenty of people on the trains though, and the car park was full, which is good. We need lots of income. 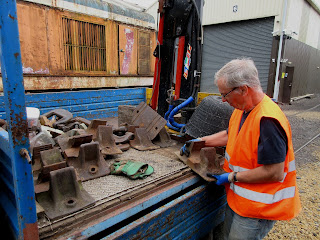 The team split into two (or even three) today, with a side helping of a 2 man strimming gang at Hayles and at Laverton, to free up a stack of sleepers hidden in the brambles.

The Landie was out and about ferrying stuff. We took it to Broadway, first to pick up scrap material from the trackbed by the buffer stop, and then to pick up the waste material left behind by the welders at Childswickham.
Here we are unloading unwanted GWR type through bolters, to be used by the 2807 boot scraper manufacturing mob. Nothing goes to waste. 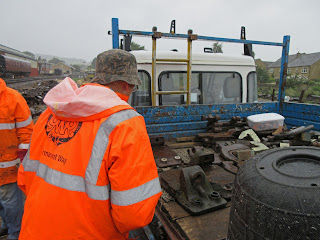 The scrap run completed, we then repaired to Winchcombe to pick up some replacement chairs for the first buffer stop at Broadway.

We have a lot of material stacked at Winchcombe, with the idea that 'it will come in useful one day' and it did!

Meanwhile, a gang at Skew bridge were completing the last of the sleeper sorting. There's no more to sort out now, just loading required. 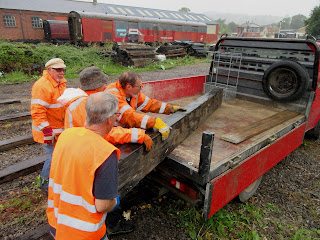 Dave was very keen to see us at Winchcombe. Not for the company, but for our muscle, sadly.

A 10'6'' timber needed loading on to the red Transit, to replace an unuseable one at Broadway north, ex Laverton but already rotten.

Many hands made light work, and the 5 of us lifted the heavy timber on to the Transit quite well really. And we all have 'a certain age' too! 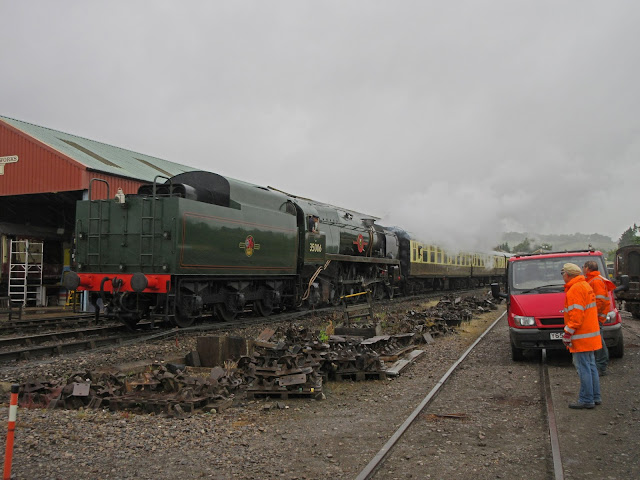 While we were doing this, P&O set out from Winchcombe, and we stood back to admire this lovely beast. In the foreground our stock of interesting chairs. 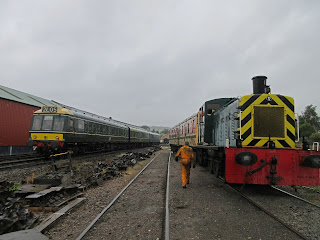 Shortly after the DMU trundled by, and this too had a goodly number of passengers on it. Great!

On the right the Winchcombe yard shunter was busy, with a rusty BSK in tow, said to be for sale.

Some stock was being repositioned, so that we can get better access to another turnout for Broadway. 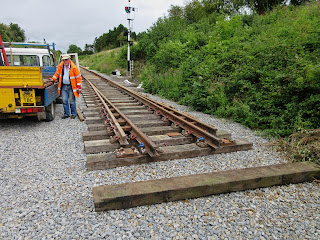 Back at Broadway the 10'6'' timber was delivered and unloaded at the end of the turnout being built there. Job done. Next, see to the buffer stop at the back there. 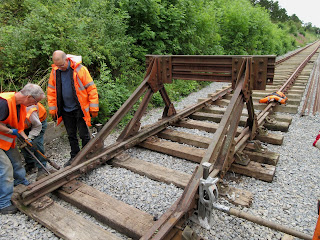 Last week we resleepered the stop block, but some broken chairs still needed replacing. We brought up the three chairs dug out from Winchcombe, and pushed them underneath, having jacked up the end of the stop block. 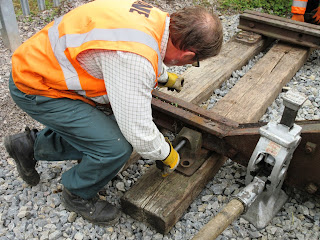 Then Dave inserted some extra long bolts specially dug out from our storage GUV. They went in OK, but turned out to be too long. We couldn't do them up tight as we ran out of thread.

Drat! This meant another journey back to Winchcombe, but at least we could make it a useful one. 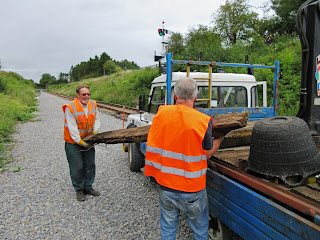 We took the opportunity of adding to the journey some scrap wood and the three old sleepers, removed from the stop block a week ago. Luckily they were so rotten that they were as light a a feather. 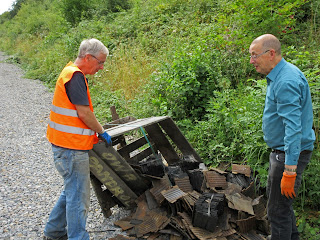 While Dave and John were away at Winchcombe, the three of us remaining made ourselves useful by loading up the bearers left over from track laying (later taken to Winchcombe as well) and sorting out the mess with the pads. The good news is that a second stop block has now been identified, and will be brought up to Broadway on Thursday. It does require a tidy site tough, because with the second track that is planned, there will not be much room for rubbish, or the collection thereof.

This pallet of pads was brought up to be used, but collapsed on delivery. We took it appart, put the second hand pads on the catch pit cover, and the new ones in bundles on to the PWay trolley. In this way they are off the deck, and can be moved elsewhere as desired. 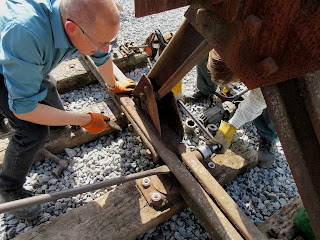 Not long after, Dave returned with a set of bolts that were a more useable length. We fitted the chairs, and managed to bolt up two out of the three. The third one would not do up as the bolt kept turning (as well as the nut, which is not the idea). 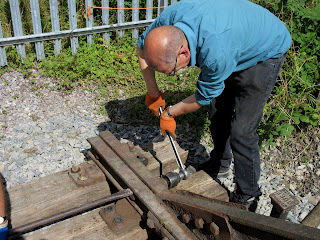 We tried jamming the bolt head with a bar, achieving some succes, but the last one elluded us and still needs tightening. The chair screws then need drilling and inserting. 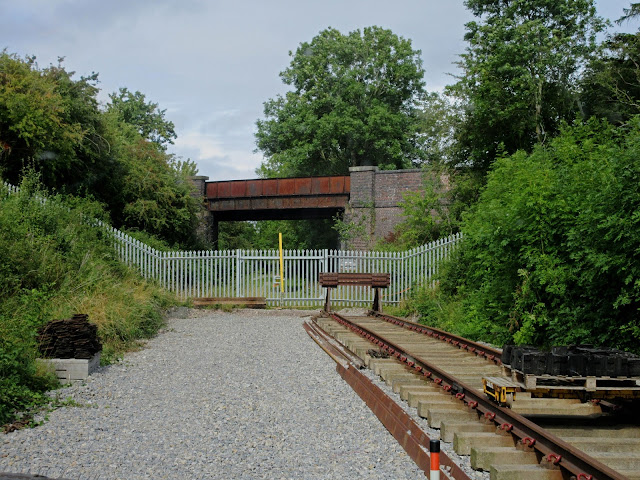 This is how we left the site - pads neatly stacked, and the trackbed ready for the stop block. Four pairs of rails are already there to start us off.


Some historical stuff, and a request

We recently did a review of what we know about the stationmasters at Broadway. We think there may have been at least 7 (some only for a short time) but know relatively little about any of them. Can anyone help?

Here is a list of what who we think they were:

If anyone can tell us more about these, and perhaps even provide a photograph, we would be delighted to hear at breva2011 (at) hotmail.co.uk. Any family members out there perhap? (Jennings excepted)

Was W. Turner the last one? All we have is a recollection from a resident that he was there, but no more.
Broadway closed to passengers in March 1960.

Finally, a link to a sound recording of a passing Britannia at Broadway, just uploaded:
https://youtu.be/HvViXdNbIqU

Enjoy - it's a rare bit of sound history for Broadway.