A very rainy day was forecast today, and as the day neared, the forecast got worse, ending with 'heavy rain all day'. Nothing for it though, no reason not to turn up. Wonder if those 'waterproofs' really are? 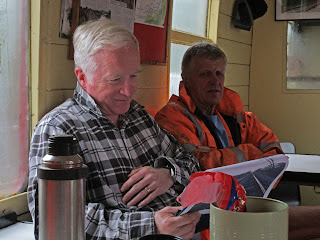 With the rain hammering on the mess coach roof, we kicked off with hot cups of tea and waited for Dave to outline the 'to do' list for today.

Instead, a monumental written list, which was so long that at the end of it, we had forgotten what was at the beginning.

Here Bob is perusing said list, and reading it out to the stunned tea drinkers. All that? But it's raining..... 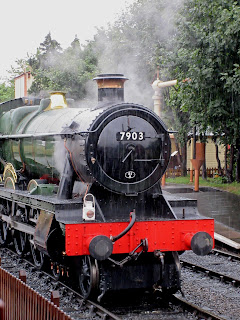 Just to give you an idea of the conditions, here is a shot of Foremarke Hall out of the window. The smokebox is streaked with rain coming down in stair rods.


Anyone up for a trip to Winchcombe to wander round the extensive yard and find some chairs for the second buffer stop? 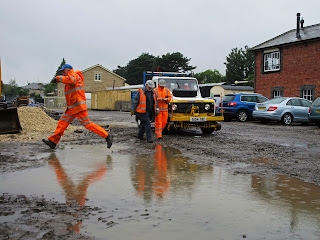 The Landie went down to Winchcombe to get the chairs, and a second crew also went down, to fetch the Telehandler to locate some sleepers reputed to be lineside. Your vehicle for today, Sir, is on the other side of this giant puddle.
They did OK though, finding 60 useable SHC sleepers stacked just south of Stanton. 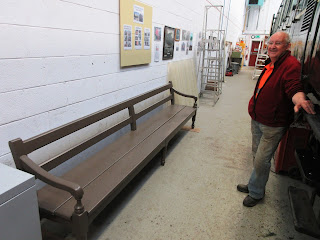 Far better to remember suddenly an urgent need to visit the woodworking gang in the nice and dry C&W shed.
These guys work miracles with wood. It's really nice to see that the skills and arts still exist. Just look what they have managed with this 10ft exterior wooden GWR bench, which was donated to us by a friendly railway in a state of near ruin. Almost everything on it is new, it even has sliders under the feet, so that they no longer stand on wet ground and rot from below upwards.
The destination of this bench is Broadway, where it will be located (in the dry) under the canopy. An identical one can be seen on platform 2 in one of the opening day photographs that we have. 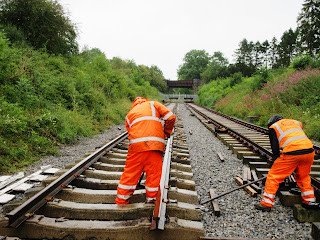 Armed with buffer stop chairs and all their paraphenalia, rail saw, nut runner et all, we set off  for Broadway north.

Here we found another small team had already arrived directly from Toddington, and had got stuck in clipping up the last two panels left over to do from Saturday. 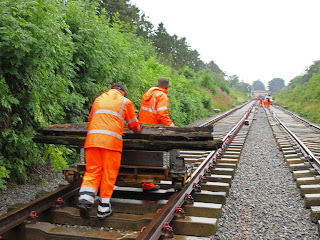 The team with the Landie then got to work with resleepering the second buffer stop. You may remember that it arrived with 100% rotten sleepers, 3 of which we replaced on Saturday.

Here the gang is wheeling away the duds, ready to be taken away by the red Transit. 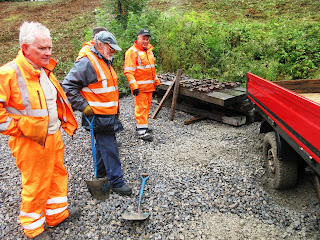 The Transit had arrived with the 4 replacement sleepers we needed, and the attempted a 3 point turn by the home signal. Bad idea. Because the transit is built like a car, it had no 4 wheel drive, and no diff lock. In the loose ballast one rear wheel stood still while the other quickly buried itself into a deep hole of its own making.
What now?
We assembled the whole gang, dropping all the tools, to lever up the rear so that the reluctant wheel could be packed. With 10 men pushing, we eventually go the thing out, but what a job it was. We had to have three attempts at it, before it was mobile again. 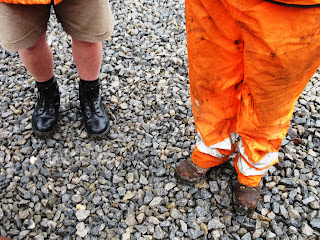 After the heave- ho with the Transit, it was quickly evident who had done the pushing, and who had waved their arms in distant encouragement. Shall we say that the pinkness of the leg was from the exertion? Nice new boots too.... don't want to get those too dirty. 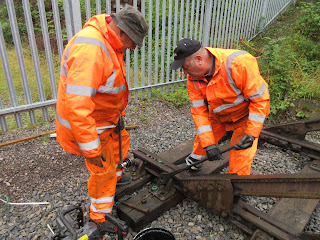 One of the outstanding tasks from last Wednesday was to do up the bolt for the third chair that was placed. Today we brought the extra spanner that was needed to hold the head of the bolt when the nut was done up. 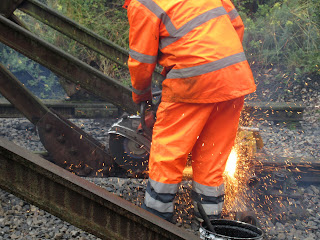 Martin then got the disk cutter out, and successfully cut off the remains of the broken chairs under the second buffer stop. This opened the way to replacement of the sleepers, and positioning of new chairs. 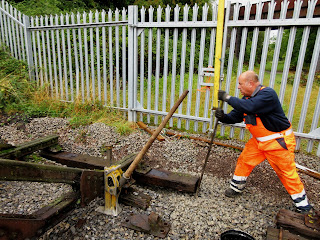 Here one of the four 'new' (well, recovered form the winter relay in Winchcombe, but still good) sleepers is pushed under the second buffer stop.

We also noticed that someone had taken an interest in our site, as some of the ballast under the fence had been scraped away, enough for a person to wriggle under. We filled the gap again. 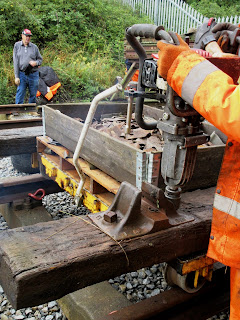 The 4 sleepers we brought down were extremely heavy to manoeuvre. We eventually got them off the Transit, on to the trolley and here, arrived at the terminus, we got the nutrunner out to remove the chairs. After that, they were featherlight. Amazing ! 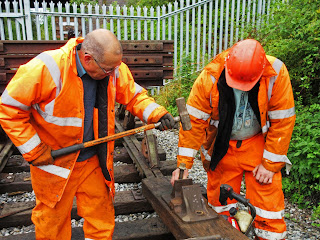 Having removed the (GWR  style) throughbolt nuts, we had to hammer the bolts out. The bolt holder was deemed to be very brave, but escaped with all fingers intact. 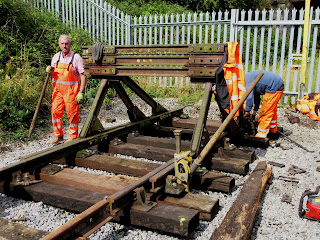 Here is how far we got at the end of the day, as it became increasingly drier, and we even had to start stripping off some of our outer layers. Yes, it's an English summer!
All sleepers have now been replaced, all the chairs are in. We need more bolts to secure them, and they still need drilling and screwing down. Doesn't that buffer stop look much better now? It needs the rails drilling as well of course, and bolts found for the fishplates. 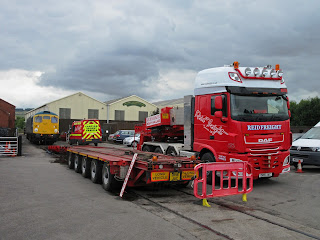 On our return to Toddington, we found one of the diesels (class 24?) in the process of being loaded.
Wonder where that is going?

The last train of the day, hauled by Co-Co 37 215, was waiting in platform 2, ready to leave for CRC. Shortly after its departure, the DMU trundled in from Buckland. That's the interesting thing about us, it's quite busy. P&O was about too. 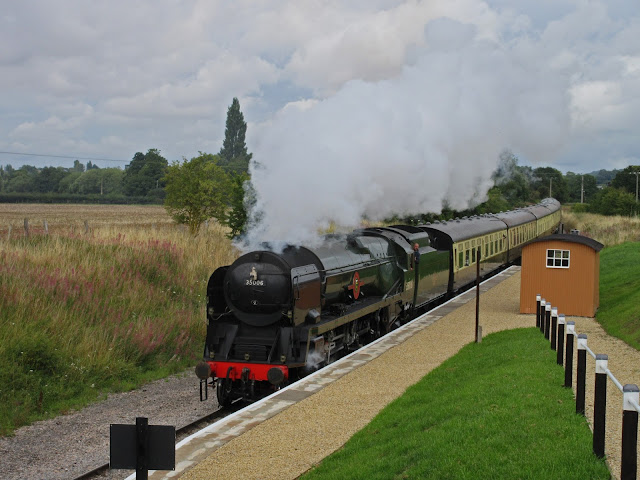 Here's one we took earlier, at Hayles Abbey halt. It was yesterday in fact. P&O steams by with the power on. What a great sight!
We just went to check that the halt was OK and in good shape. Afterwards, we took a chocolate cake and an Espresso at the Fruit Farm cafe, followed by a walk up to the Cotswolds Edge, just to see if the halt could actually be seen from up there. 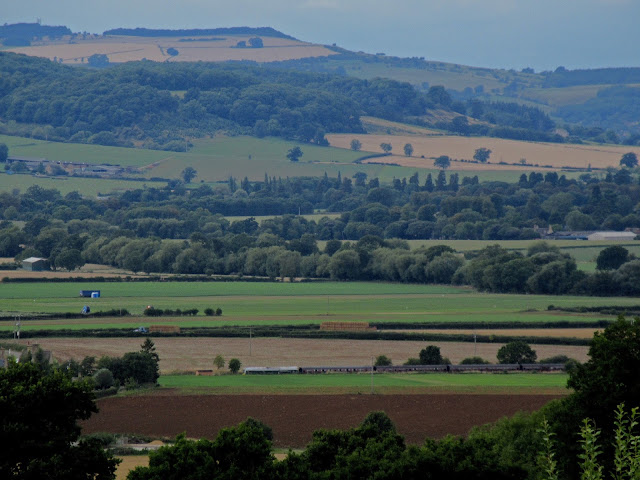 It could - just. Here's a diesel hauled train passing through, and you can see the corrugated iron shelter peeping out of the cutting in front of it.
Isn't the vale beautiful? Not sure which hill that is, maybe Bredon? 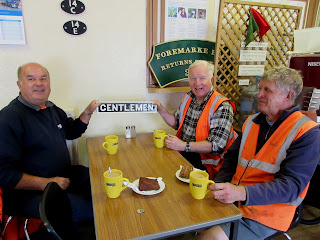 To finish off, a cup of tea and a bun at the Flag & Whistle. The GENTLEMEN of the PWay say 'Hello' to you. See you again next time.