Back to track laying! We continued today with laying the headshunt of the main line at Broadway, until we reached the home signal post, the trigger for a change and the start of the first turnout. 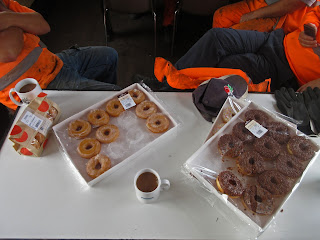 First things first, it appears we now have a bit of an 'arms race' in the doughnut supply. Anything Hayles / The Wednesday Gang can do, we can do better. No fewer than 46 doughnuts turned up today, including 36 on 3 trays sourced by Paul C. Take your pick. Take several. Please !

Then off to Broadway to continue laying track. We had 3 more panels to do to get us to the home signal. That is the point at which the turnout starts. 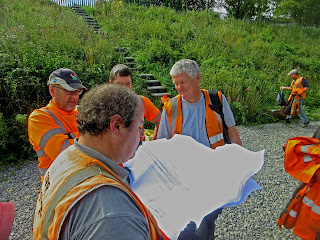 Now..... let's see which way round this goes. It turns out that these things are drawn once, but can be used in mirror image, so do we want that, or the one on the drawing? 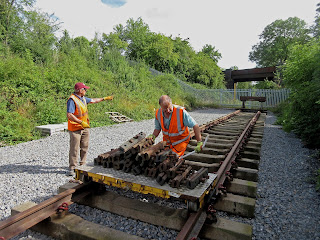 With the head scratching going on at the business end, some of us decided to roll out the fish plates for the siding, which will be laid alongside. Pairs were dropped off the trolley next to the fish plates on the main line already laid. 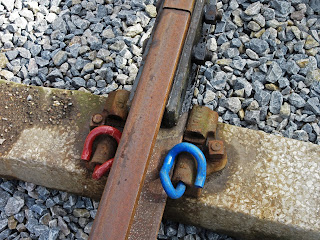 We had the test case earlier of two Pandrol clips inserted in the same direction (by accident). Here is a case of where this was done on purpose. The blue one is the reverse one, and it was put here due to the proximity of the fish plate, which means that a clip could not be inserted from the top of the picture. The reverse clips are all painted blue, but what happens, see, is that the paint slowly comes off until you get an old one with no paint left on it at all, and then you are puzzled because it won't fit normally. But this one here is brand new. 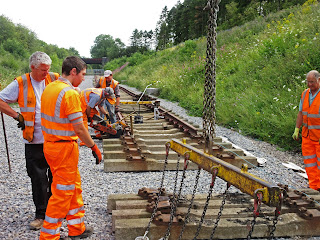 Steve has now joined us in the JCB, and off we go laying in sleepers again. Here is the first set of 4 of the day, paused on the ground while Steve repositions the machine. 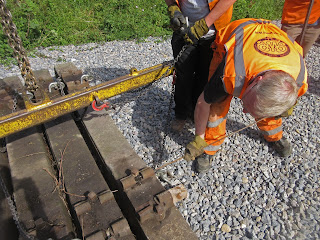 Laying sleepers must be easy, you'll be thinking, but there are lots of little foibles and hurdles. It's knowing about these and anticipating them that makes a team function well.

Here we have detected a blocked up hoop on the chair. With these second hand sleepers many have been knocked into the ground and have muck and stones in the hoops. Here Tom is poking a rod through one of them to clear it. 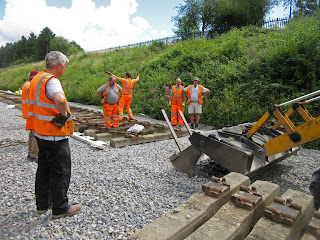 Another issue that cropped up today was the famous 'bow wave'. If you push stuff along the trackbed (and we do this a lot) then a wall of stones builds up in front. This then stops you from laying sleepers evenly, or even risks breaking their backs if a train passes over them. Steve here removes one of these 'bow waves'. Problem solved again, no need to panic. 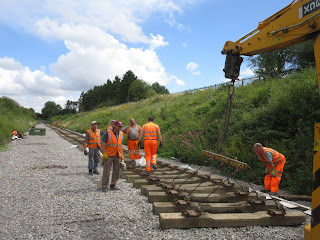 Mid morning we had laid the last available sleepers on site, about 80 of them. We were a few short, so Steve was dispatched to Childswickham, where a handful were known to remain. Just right. That brought us up to the foot of the home signal. Nigel gave Steve the slinging directions:
'Malverns side a touch'.
'Malverns side'
'MALVERNS SIDE !'
Sigh. 'Round of Grass*, Stevie...'

(* Well known pub in nearby Badsey, in the Malverns direction.) 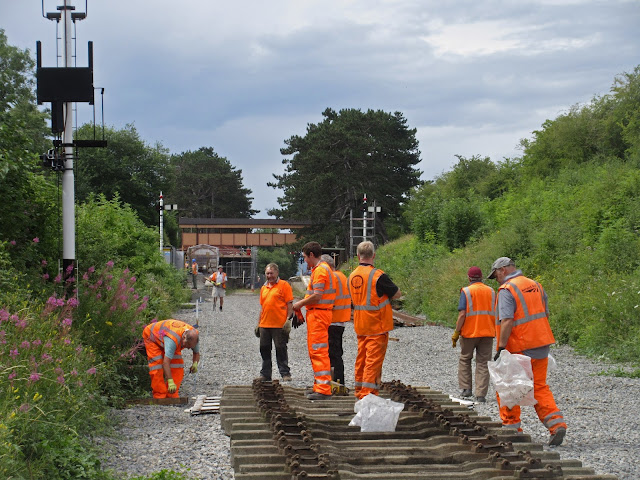 Here we are, arrived at the home signal. From here the track divides into two, with the loop (platform 2) line to branch off to the right. In the background some of the Broadway gang watch what we are doing, we're quite close now. 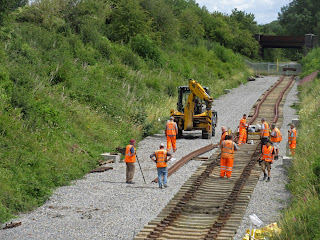 With the sleepers we had nearby all laid out, we decided to lift in the rails that go with them. With this signal next to the rail head, you can get a good view from above over the goings on below. 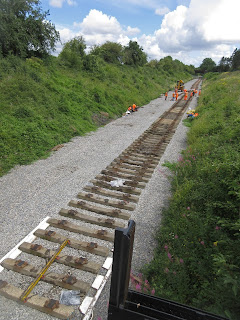 Using the wide angle, it looks like we have laid absolutely loads of sleepers (just 80 though, enough for 3 panels).

These now stretch all the way from the buffer stop by the far boundary to the foot of the signal. 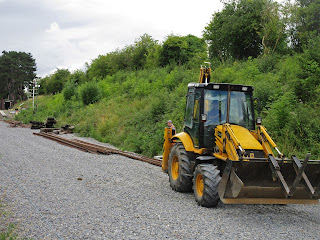 Bert went up to the stock of rails, ex Laverton Loop, to attach two more to the JCB, which dragged them out of the pile and down to the empty sleepers. 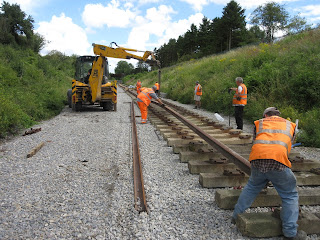 Six rails were then lifted in, to take the track almost up to the signal. A last pair of shorter rails was sourced from the Childswickham pile, and dropped in as well, so that we had now laid 3 1/2 panels to reach just beyond the signal. 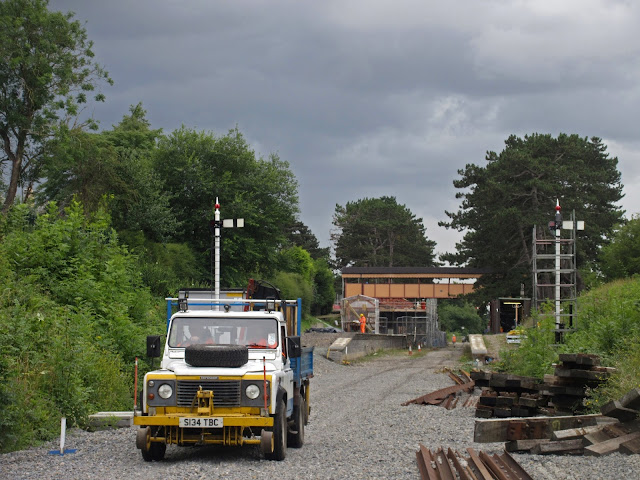 At lunch time the Landie arrived from another urgent fishplate replacement mission near the tunnel. One of our track walkers had spotted the issue, and it was dealt with immediately.
The Landie returned to Broadway, bringing with it some ominous clouds. The forecast backed this up, as 'heavy showers' were forecast. Oh-oh. 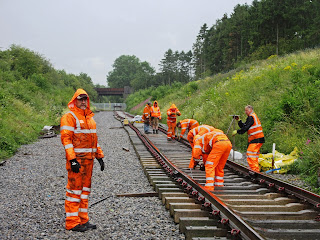 Soon the heavens did indeed open, so that those who were working just 5 minutes ago in short sleeves suddenly found they needed to dress up for a winter downpour. It was that sort of weather today. Luckily it didn't last too long, then we called a halt for lunch. 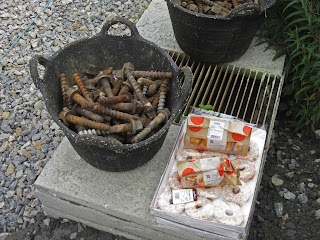 Vital supplies had been pre-positioned, and not only for the turnout.

The doughnut level, 46 high at the start of the day, was now falling rapidly.  Then our gaze was diverted by Mrs. B's even better home made cakes. At the end of lunch there were still a dozen left, so we decided on a friendly gesture and offered them to the Broadway team. 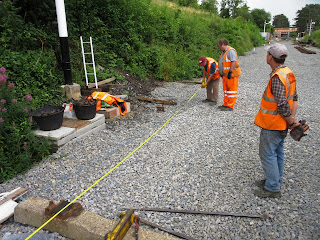 After lunch we started a new chapter, by setting out the northern loop turnout.

The bits for it are in the top RH corner of the picture. We've thought about this, so all the pieces have been stored nearby, after being brought up from Laverton. 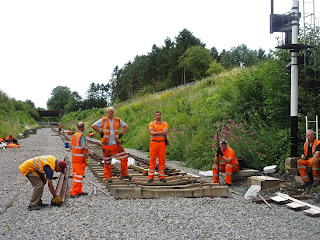 As Steve busied himself with the pile of timbers for the turnout, and expectant team remained at the rail head, waiting for him to return with the first timbers. These had all been numbered while in situ still at Laverton. We also had photographs, thanks to the wonder of the mobile phone, which could now be consulted. 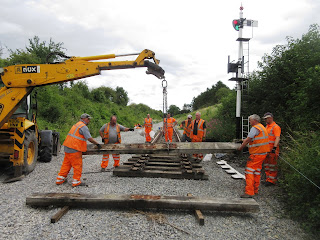 After a handful of plain timbers, two extra long ones were positioned. These will support the mechanism for operating the end of the switch blade here. You can see the orange patches (places where the base plates used to be) are off to one side, with a plain bit of timber to the right. 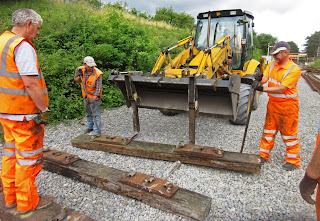 Here you can see the base plates starting to show traces of two rails, rather than one. 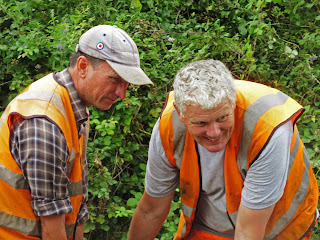 A study of Chris and Phil, lifting one end of the increasingly heavy point timbers. From their faces, this one doesn't look too heavy. However.... 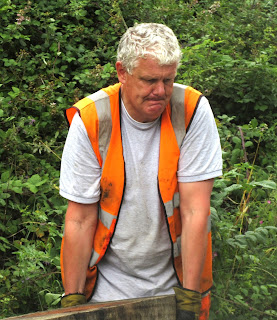 ... things soon got heavier. No one minds doing a bit of hard work, but after placing quite a few of these, we realised that they had to face the other way. This meant that each one had to be picked up again from ground level, and walked round in a 180 degree semi circle, while climbing over the other timbers. That was hard, as Chris' expression now shows. 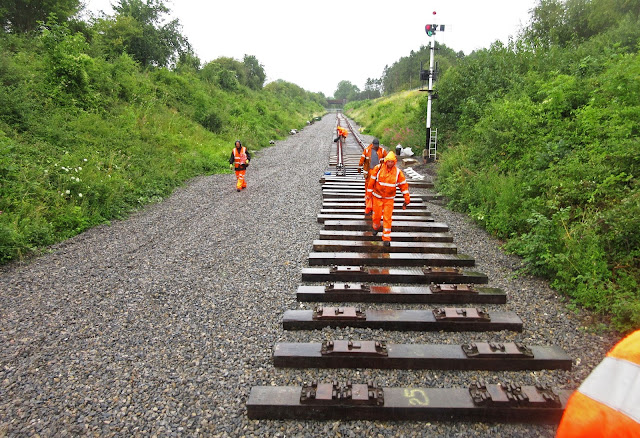 After we had laid 25 of the timbers, we received the 'benefit' of another downpour. We were about to lay in the first of the switch blades, but the volume of water that came down was too much, and we decided to call it a day. The Landie took us back to the lower car park, which had now been transformed into a quagmire by the rainwater run off from the main road. This would need addressing, perhaps with a drain across the entrance? Our cars acquired huge sticky jackets of clay around the wheels, and the simple act of driving the few yards to the main road resulted in wheelspin and a bit of to-ing and fro-ing just to get out.

A small number of us will be back on Monday to 'tweak' the track into something resembling a straight line. We now also need to install the second buffer stop - or stop block, as the professionals remind us - and this still needs sourcing from a choice of 3 we have, all with their own issues of accessibility.

Fortunately we have not had to use these on our railway. These concretes, weighing in at 250Kg each, could be manoeuvered by 6 men on 3 of these nips. However, if 2 men on a pair of these hit a hollow or stumbled, then the full weight quickly came down on the remaining 4. We're very lucky to have mechanical assistance in the 1000s that we have laid so far.