Preparing the first trackbed at Broadway

Two reports in one today - preparing the trackbed for the unloading point on the embankment by the Childswickham bridge, and a day with the canopy gang at Broadway. 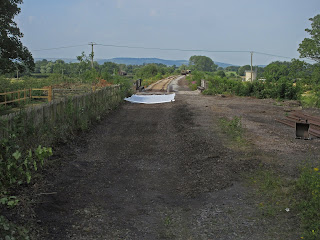 Here is the start of the day view of the area we were working in on Thursday. On the right the future unloading area for all the kit for Broadway north, on the left the site of 4 additional panels of track that will be laid to stable the supply train, and in particular the sleeper wagons.

The trackbed needs to be dug out, and the heavy undergrowth around the fence removed. Then Terram, and 8 inches of fresh ballast on top. 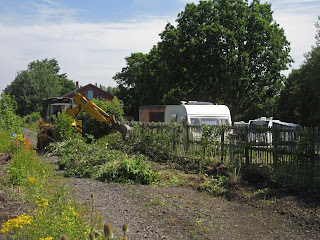 Here is Steve, carefully scraping away the brambles and young tree growth from along the fence.

In the foreground a trackbed surface of dirty, dusty, spent ballast. That has to come out too. 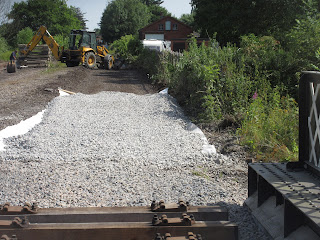 After a while, Steve has removed some 25 yards and we drop in the Terram we had.

We were a bit hamstrung that day, because a roll of the stuff we had lying by Broadway station bridge has vanished. Where has it gone?

Ballasting had to stop until we got a new roll 24 hours later. It's not very commonly available. 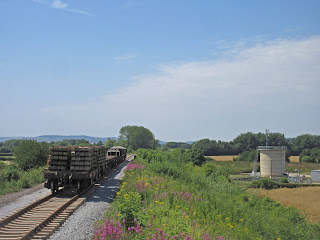 Overnight, an appearance. Tarrah, the supply train is here! It's completely loaded with sleepers, 40 rails and Dogfish with ballast. No more unloading at Peasebrook, and the long drag north with sleepers. 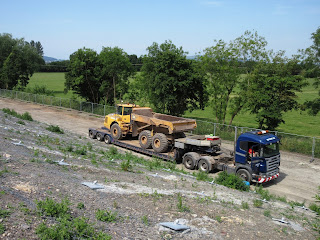 Rumblings down in the car park too. An enormous 3 axle dumper was delivered, looks like a 20 tonner.

In the foreground the soil nails. They still need tightening up, after the cement has cured. 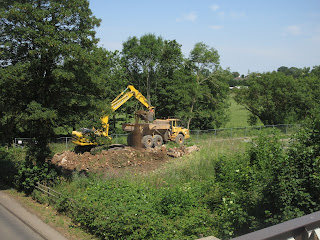 The big dumper was paired with a large 360 and together they set about levelling the Childswickham end of the car park. The ex Mythe rubble was loaded up and transported a few yards away to fill voids.

Our newly built access ramp unfortunately had to be removed again, as it took up too much space below. We think we can modify the existing one near station road bridge, to avoid the turnout that will be located at its current top end. 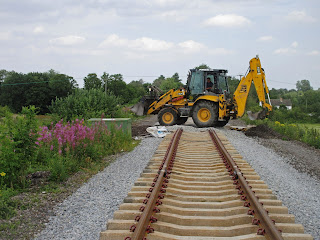 Steve also built up the vehicle crossing where the track crosses from west to east, with new (middle) and spent (outside ramps) ballast. The first customer to use it was - Steve ! 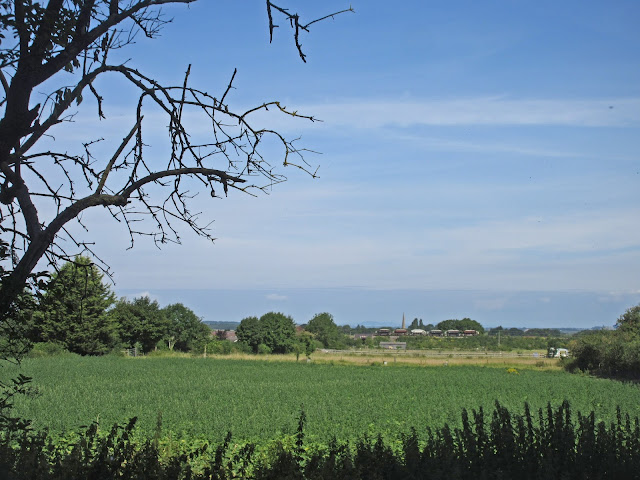 Can you see me, mother? This morning early it was possible to catch a glimpse of the supply train on the embankment approaching Broadway. This picture was taken from the B4632. Behind the train you can see the spire of the Childswickham church. There have been no trains here since 1976, when the line was closed (demolition trains excepted) 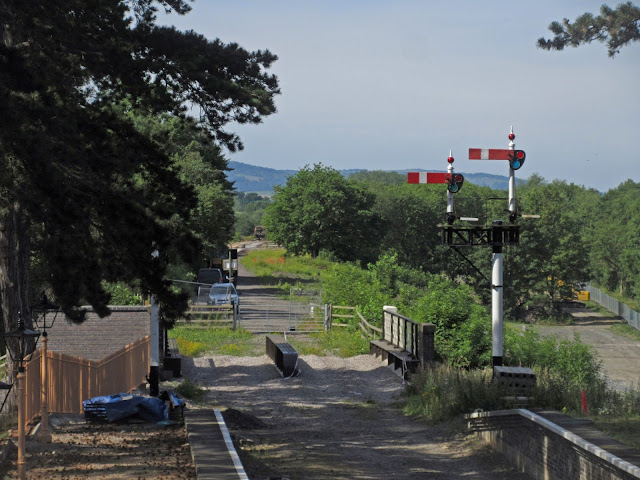 Up on the canopy scaffolding at Broadway a few minutes later, you can see the supply train peeking round the corner. It's a first!
Now for a day riveting, see what's new at Broadway. 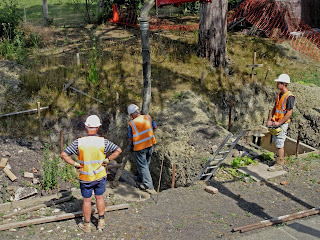 A concrete lorry and pump came today to pour the bases of the footbridge step supports. 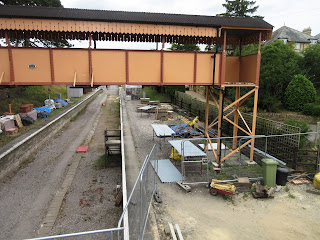 The other side is not being done yet.

The towers are approx 8ft closer to the building than in GWR times.  The footbridge is located as far away from the building as the site permitted. 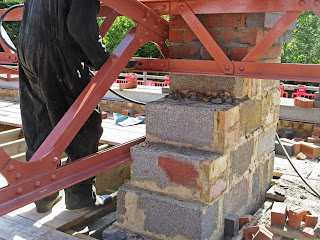 The canopy team did their best to work around the chimney that was built. Only one rivet was achieved, and that with a special air drill with a 90 degree head. 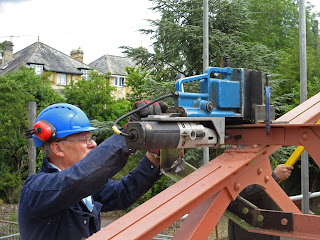 We've done all the easy rivets now, so progress slowed as we had to manoeuvre further up and into the structure, sometimes using a special jig such as here in order to allow the mag drill a firm footing. We slowly riveted our way north, until we came to the end where the canopy overhang to the footbridge should continue. 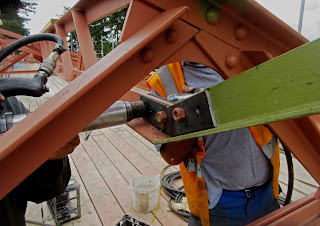 As this is not being built, special brackets were made up and installed to support a canopy end similar to the one on the southern end. 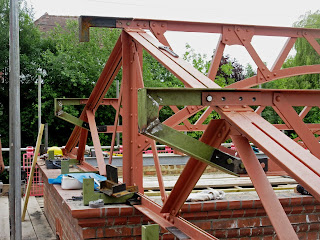 These brackets are green in this overall view. 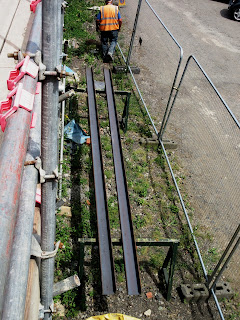 Down below, two 'C' section modern steel profiles have been bought to support a small canopy over the front door. Up above, riveting of the Broadway heritage canopy came to a successful conclusion today. We've done it! Some smaller jobs remain to be done, but these will not be hindered by sheeting work, so we are releasing the canopy for the continuation of the roofing.
As the 'piece de la resistance' we installed the two authentic works plates: E. Finch, 1903. These are exact copies of an original lent by a supporter, who recovered it from Broadway during the demolition in November 1963. No, one is not upside down, we'll leave that charming peculiarity to Toddington. 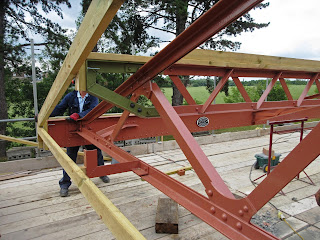 Here's the worksplate in context, seen through a truss and purlin, all now soundly riveted up.

This achievement deserves a reward... 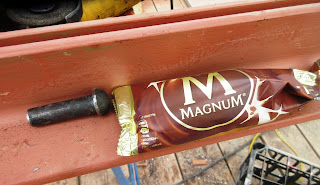 The canopy team did it, a complete GWR heritage replica construction. We delivered. It was completed in the same week as the last brick was laid on the building.  Look up and gaze in wonder (when the scaffolding is down again).

Now a last look at Steve, who carried on today, armed with a new roll of Terram. 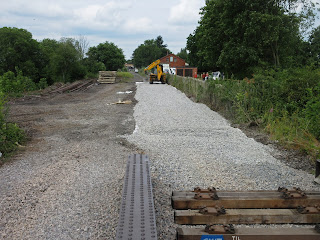 Here too an achievement today: the 4 panel trackbed on the Broadway goods shed embankment was dug out, ballasted and graded. It's ready.

Tomorrow: we lay track here! We are on our way.