A quick in-betweenie, with a day at Broadway 'tweaking' the track, and further work on the canopy.

The day started merrily with Steve, always a happy bunny. We set out to 'tweak' the 220 odd yards of track laid these last two Saturdays. 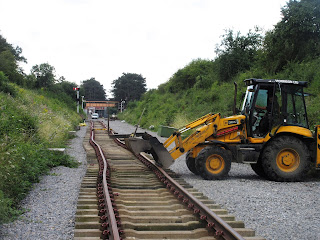 This picture shows the sort of issue the track had. Big 'dinks' this way and that.

At first Steve tried to push the track over with his back acter, but it wouldn't budge. With the Pan 9 base plates on this section, there is very little movement possible. Even the little shoves we gave it caused several clips to ping out. Plan B was the front bucket, and this worked in the end. 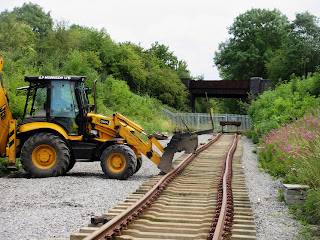 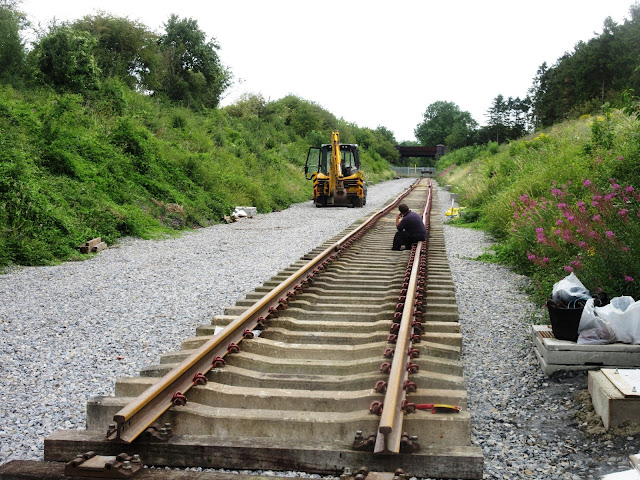 Steve sits on the track at the end of the job - much better now, and we now know that we have the correct space for the siding, to go in on the left. 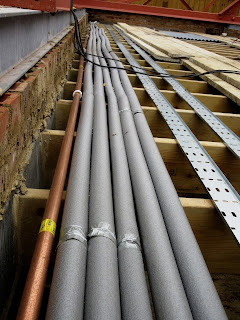 We had a jolly tea with the Broadway gang - there seems to have been a remarkable improvement in morale these last few days - and a small gang was working on two station sites this morning.

As well as that, electrical contractors were putting in cabling ducts (on the right here) while earlier visits from the plumbers resulted in these central heating runs, and on the left, as gas pipe. Well, the yellow sticker with 'GAS' on it is a bit of a give away.

Work was going on with the two chimney stacks. Here are 'before' and 'after' shots, with work going on on the right hand picture to make the stack look more authentic. The blue bricks mistakenly put on top have been removed, and replaced with the red and a more authentic shape. Work in progess still. 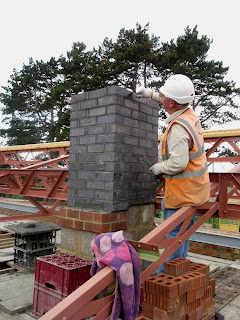 The erection of the second stack has also started. This one will be of similar size, but built in the correct style straight away. Red bricks for the next courses are stacked on the lower right ready for use.

Here Bob has just reached the plinth header row, where the stack narrows by half a brick all round.

This second stack is a dummy and will be infilled. Underneath is just a store room. 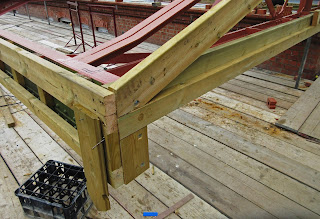 The canopy end framework has been strengthened, along the bottom timber. A piece twice the size has been added to the rear, which will be the part visible by the public from below. A steel support will be added to the centre, just out of sight top right. 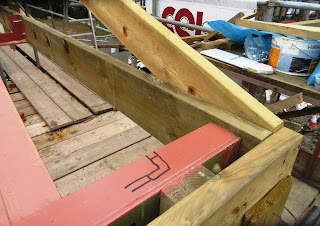 This is the much more muscular timber added, now seen from the public side. Originally this was an 8 x 4 inch piece of timber. 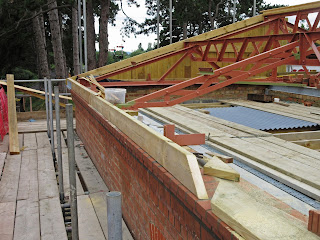 Along the forecourt side the wall plate was being added. This timber sits on the corbelling, supports the lower end of the corrugated iron sheets, and also carries the guttering along here. 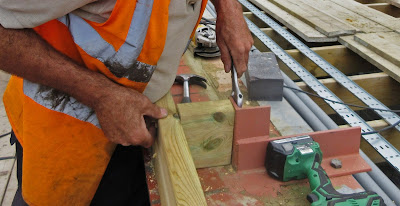 Here Neal is adding robust supports to the rear of the wall plate, a timber which will have quite a load to support over a life time. The whole thing is bolted together to brackets, themselves bolted on to the ring beam, which supports the canopy on uprights hidden between the brickwork and the inner blocks. 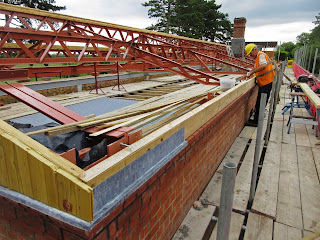 This end view shows you a demonstration length of zinc flashing, which will protect the wall plate from water ingress. It looks very neat.

The woodwork along the length of purlin on this side has been removed again, and will be replaced with more heavy duty timber, cut to an angle that reflects the slope of the corrugated iron that will rest on it (17 degrees, now that you ask). 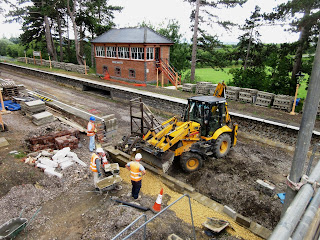 Down below the second team today was working on closing the gap in platform 1. While the foundations for this were poured much earlier, they had to be excavated again, and the blockwork below track level was a bit complicated to lay as it had to deal with two diagonal ducts heading off to the signal box. Today blockwork was able to proceed normally, and the team was most pleased to be offered severl bucket fulls of free ballast, left behind in the car park by the contractors, as unused. It was just right for us! 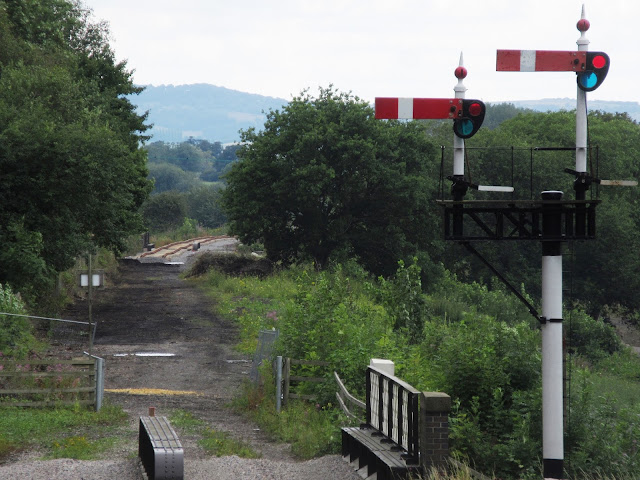 A zoomed in shot of the rail head at Childswickham shows that the supply train has left again. It will shortly be filled with more sleepers, for use at Broadway north in the Malvern side siding. The fence line along the goods shed was cleared of vegetation and the remains of a second, older fence, but we have not yet had the go ahead to lay track along here. PWay work will continue at Broadway north in the foreseeable future.
Posted by Jo at 20:28