A big day today - we changed from laying track north, to laying track south, but still towards Broadway.
Today the whole gang started laying track at Broadway north, starting at the buffer stop Steve had brought up on Wednesday. 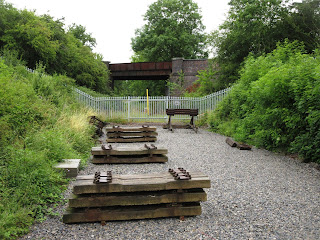 Between then and now, a supply of sleepers from the supply train at Childswickham was also ferried in. This is good, now all we have to do is lay them, no waiting.

The buffer stop brought up on Wednesday is at the back, on what will be the headshunt from the main running line. 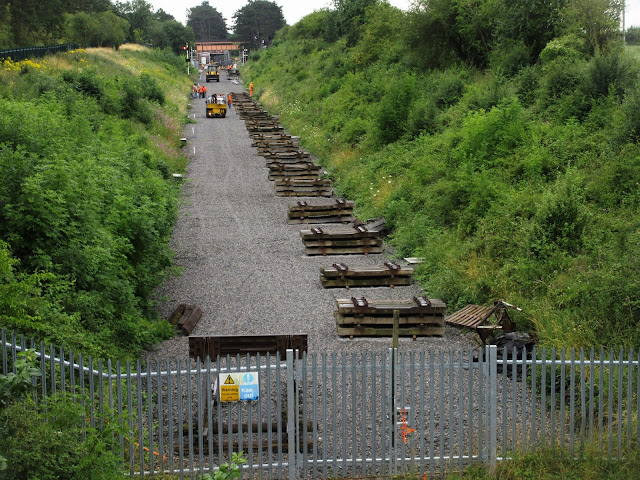 Looking from Springfield Lane bridge, the supply of sleepers brought up is vast - there were over 200 of them, from a train loaded with 320.
The main line headshunt will be on the left, the siding on the right. 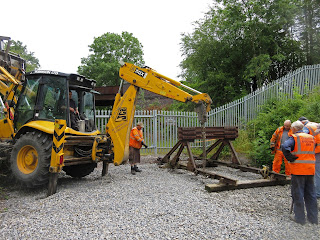 The first job was to position an extra chaired sleeper under the buffer stop, and then 'tweak' it with the JCB so that it is in the right place. 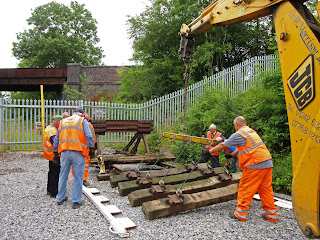 And then we started laying!  The first set of 4 concrete sleepers goes down.

These are second choice, fitted with non-standard Pan 9 chairs, which hang somewhat awkwardly in our jig. Perfect for the job here though. 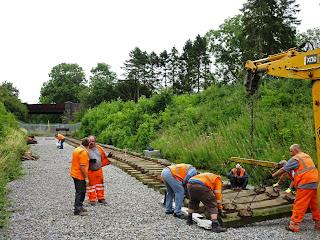 The speed with which we got these down was amazing, all helped by the prior placing of the sleepers in the correct spaces. All we had to do was lift them in, and move on to the next pile. Brilliant! 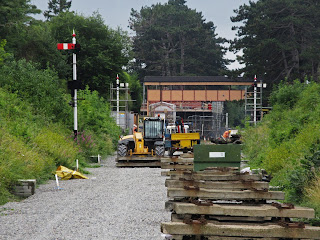 Behind us, Alan was busy with the Telehandler and bringing up the rest of the sleepers still on the wagons at Childswickham. As we reduced the piles at one end, they grew again at the other.
Notice the fine signals placed recently, especially the one on the left, which has a route indicator on it. That was interesting... 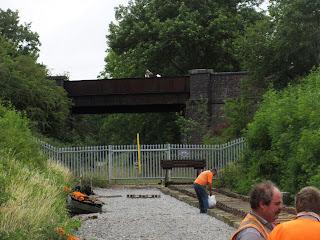 A number of spectators ventured on to the bridge off Springfield Lane, and took pictures of our work. We used to be out in the middle of nowhere, but now that privacy is over. 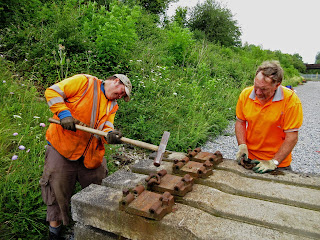 Here's a closer shot of the sleeper type we are using. A number still had their Pandrol clips left in them, which now of course were rusted in. Dave has a good go at them with the keying hammer.

Laying the sleepers with the JCB today was a little confusing, as we had turned round and were now working the opposite way. Calls to swing the load towards 'Broadway' or 'Toddington' now had the opposite effect, which confused our poor JCB operator Steve, until we had the idea of calling out the pubs towards which he should swing. He knew where those were, instinctively. From now on, the instructions from the slinger are: New Inn (north, please), and Pheasant (south please), but 'Malvern' and 'Cotswolds' remain unchanged. They haven't moved. 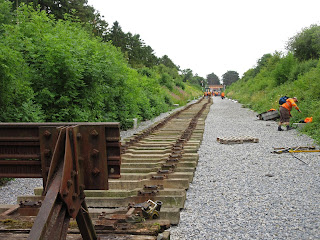 Lunch time saw us with quite a considerable run of sleepers already down. Beware of the wide angle lens though, they don't stretch as far as they look. We put down 212 sleepers, a pretty good effort for just a morning's work, including going to Toddington first to load up the tools. 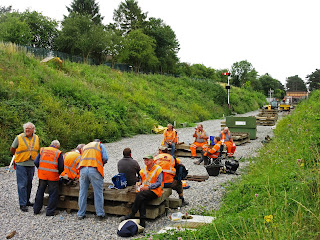 Lunch was in the open. It was dull weather, but pleasantly warm. Luckily we had now reached the stacks that were only two rows of sleepers high, so that they made perfect seats for us all. We were 12 good men and true today. 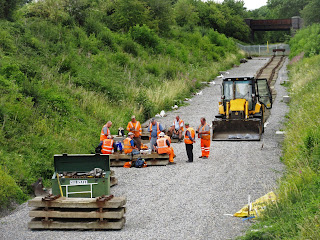 Here's an overview of the site, taken from the top of the signal post. This will mark the location of the first turnout, and you can see that we are approaching it fast. 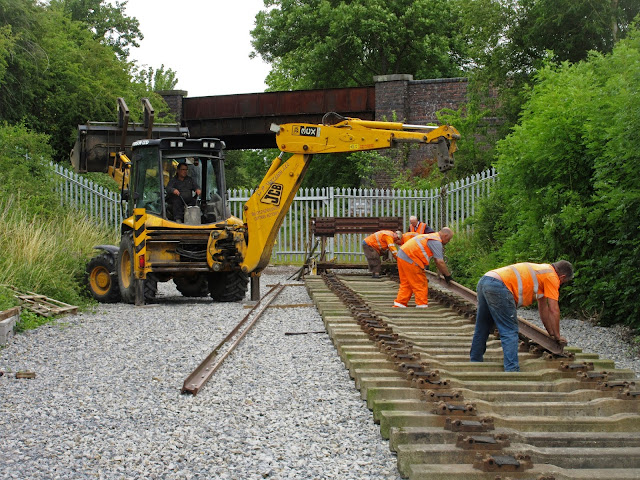 After lunch - rails ! We stopped laying sleepers, and started to lay in some of the rail that was formerly at Laverton. This is the first rail to go in at Broadway north. There's now some rail at both extremities of the long Broadway station site, and soon the two ends will meet. 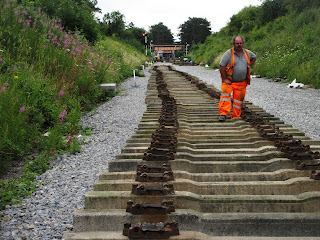 This is what sleepers laid 'in the raw' look like - all uneven, wriggling from left to right. You can't lay rail on this, so the next job was to line them all up. Nigel's experienced eye guides the 4 guys with bars to shift each sleeper Malvern side, or Cotswolds 'a touch'. 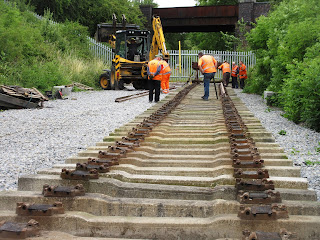 Look behind you ! This is what the alignment looks like after we had barred the sleepers - much better. It allows the rail laying gang to get on with their job. Coming to the end of the day, it was time to go back up on the bridge and take a second shot. The buffer stop's in, 212 sleepers and 8 pairs of rails on top of them. At the end of the day we were about half way along the cutting towards the Broadway station platforms.
A second track is still due to be laid on the right. 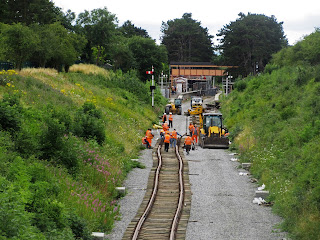 Zooming in a bit, you can see where we stopped for the day.

There's a lot of clipping up to do on this stretch now, work for the Wednesday gang 'clippies'. 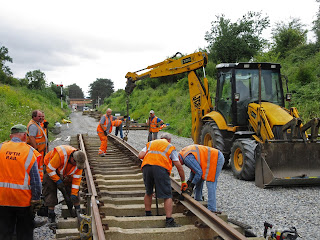 As the rail we are now using is second hand, having been at Laverton Loop before, it is already drilled, so all we have to do is fishplate it up. 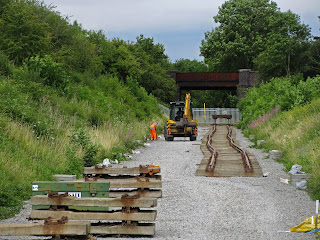 One of the last photographs of the day shows the track we laid, with rails on. It still needs a bit of 'tweaking' (by Steve with the back acter) but this is best done when everything is fully clipped up, so that it all moves along when Steve gives it a little push. But he couldn't resist already having a little go today - the picture shows it already better than it was 5 mins earlier. 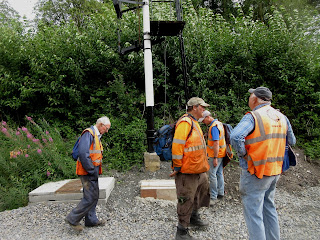 On the way back to our parked cars, we passed the signal with route indicator and paused to admire it. It all works with levers and wires, and as the signal arm moves to clear, one of two boards is lifted out of a box to reveal itself. We wondered what they said? 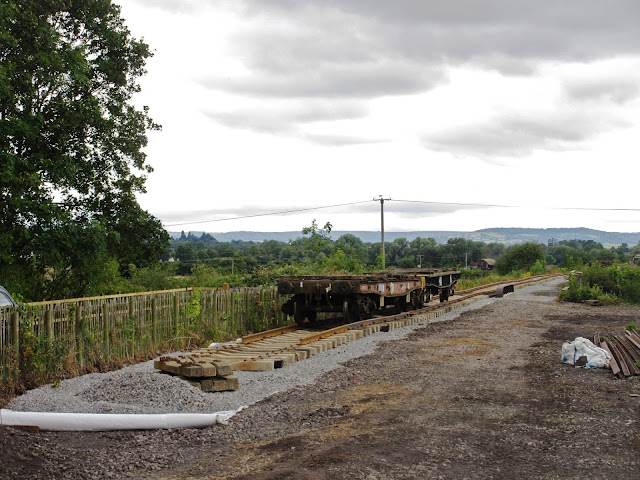 End of the day - Childswickham. The sleeper train is now empty, and can now be shunted out of the way so that here too the last panels can be fully clipped up.