We cross the bridge

The next milestone was achieved today - track has crossed the Childswickham Road bridge, and the first rail vehicles are now stabled on the Broadway side. 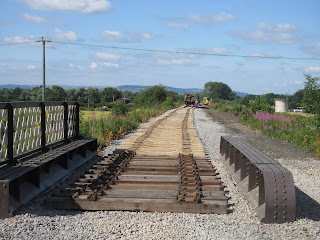 As we set off to work, this row of sleepers faced us. Monday saw the latest and last load of new rail delivered, and here, Saturday, the new rails are on the wagon you can see parked on the rail head in the distance.
The first job was to lay part of the new stock of rails on to these sleepers, up to the bridge. 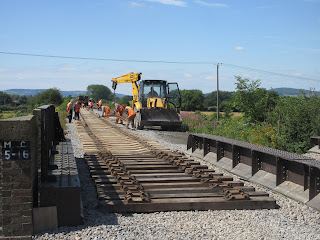 Steve dragged the first lengths off the wagon. We had 4 lengths, or 8 rails to lay up to the Childswickham Road bridge. 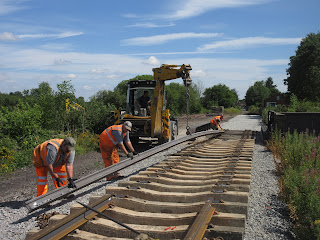 The laying in team made great strides forward, and was soon on the fourth new panel just in front of the bridge.

We had a particularly large gang today, assisted by some junior visitors, so that at one point we were 20 strong or so. Sounds like a record for Saturday. 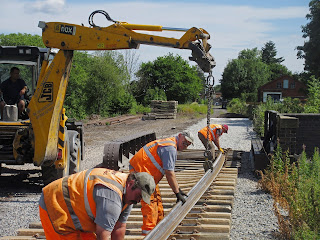 Here we go, on to the bridge itself even.

In the background is the newly prepared trackbed for the unloading area, and the sleepers for it stacked on the left. 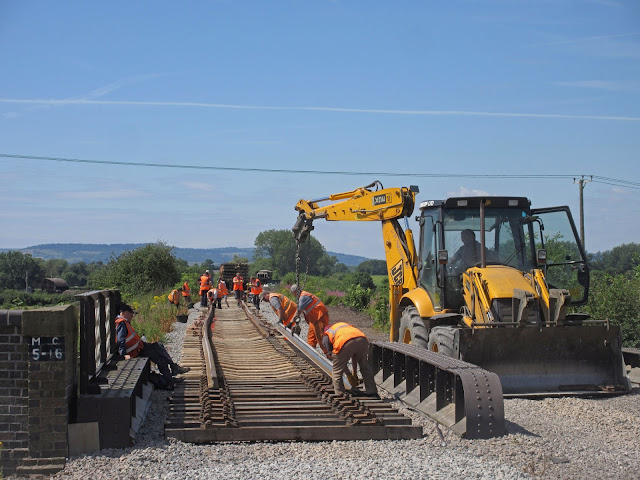 This must be quite a famous moment - the last rail goes in, on to the Childswickham Road bridge. We've come over 3km, all the way up from Laverton. Of course we still have to ballast and align the last 1000m or more, and stress the third and last CWR section.  In the middle distance is the clipping up gang, which followed the layers hot foot to make sure that the new stretch would be useable, if only roughly, for the supply train to be pushed up.
John on the left takes breather on the steel bridge itself. The steel was deliciously cold, and there was a tiny bit of shade. 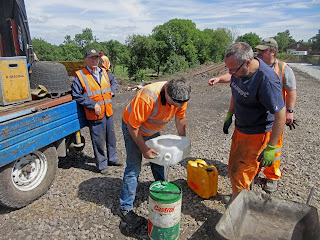 In between times we ran out of cutting fluid for the drilling team. We use a concentrate (yellow can) which is then watered down in the green can. It is pumped through the cutting head of the rail drill to lubricate it. 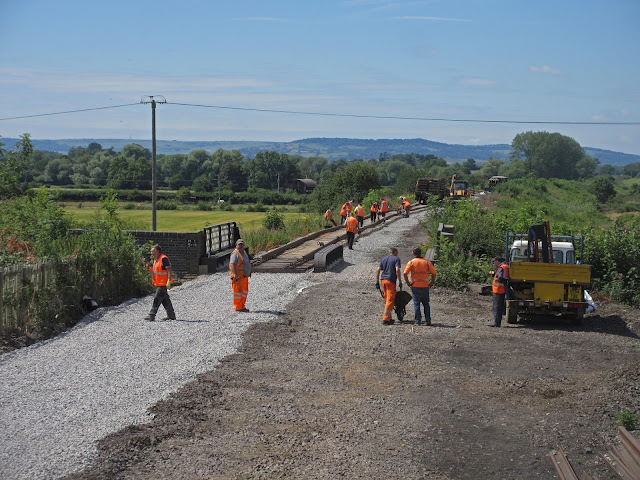 Here's a bird's eye view (well, a low flying bird anyway) of the rail head arriving at Childswickham, and the newly prepared trackbed for the unloading point on the left.
The Cotswolds feature in the background - that's the beauty of our line! 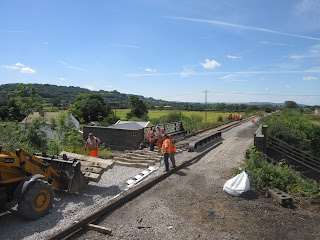 But we didn't stop there - we carried right on, now using the sleepers in the stack you saw earlier. We didn't have the Telehandler today (not much point) so Steve brought the sleepers on his moveable forks and we laid them roughly, using the rust line from the historical rail line we can see in the dirt. 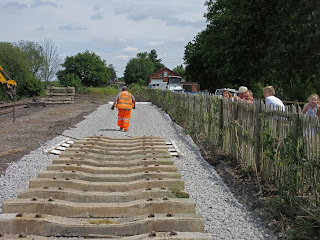 We're already advancing quite nicely here, and have attracted an appreciative audience from the Caravan park next door. 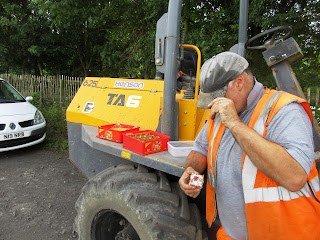 At lunch time we ambled down to the big shady tree - it's now within easy walking distance - had our lunch of light and healthy salads, then hit Mrs. B's cakes big time. Those on diets preferred to turn away from the camera... 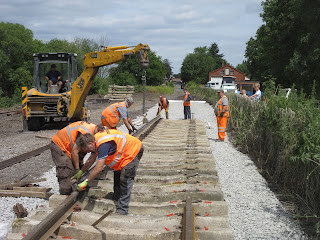 After lunch, we're back on laying track. The next 26 sleepers have been laid out, so Steve went to fetch another rail, which you can see being laid in here.

At this point we are now within the confines of Broadway station, which you can glimpse between the trees in the distance. There was a ground frame controlling the sidings on the right, just where our audience is still watching us. 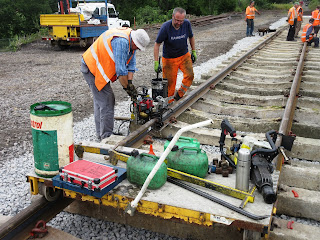 The first railborne vehicle across the bridge was this trolley. Does that count? It carried the kit for the drillers - petrol, bits, grease, nut runner, Pan pullers, crowbar, coffee. All essential. Neil and Ade drill one of the last holes on the stretch we are laying today. 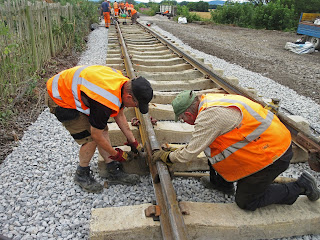 If you've been following this attentively, you'll know we are only drilling (and fishplating) one joint in two. The other joint in two will be welded soon, but in order to allow the supply train to advance, it gets a temporary set of fishplates which are held on with special G clamps. 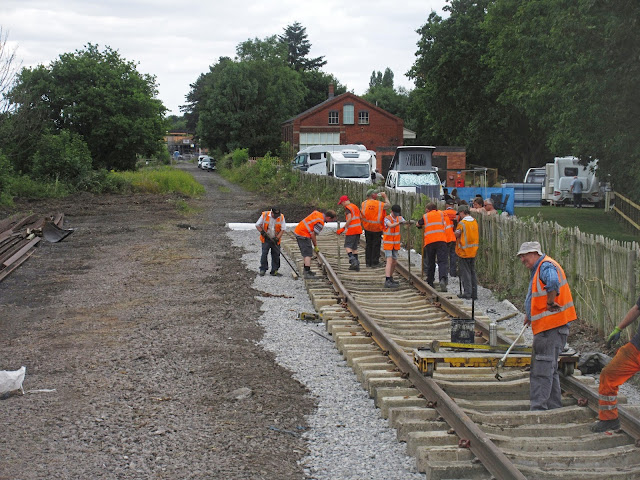 Near the end of the day, with the clouds now covering the previously sunny sky, we reach the end of our little 'siding'. Clipping up is going on along the final length laid. Only one joint in 3, as we ran out of materials. With two gangs on the move, it's difficult to keep tabs on what is where, but basically as we lay more track we keep running out of stuff and have to get more from Winchcombe. The Wednesday gang will no doubt polish this bit off. 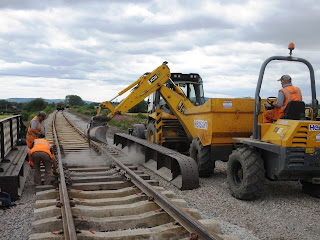 One of the last jobs was to get some fresh ballast to put under the wooden sleepers on the bridge.

Steve scooped some out of the dumper and dropped it in, raising thick clouds of dust. It was then packed by Nigel, until the track was safe to use by the supply train. 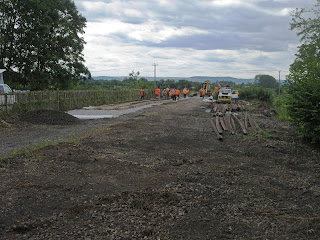 This is the view of the new unloading point on the Broadway side of the bridge.

The sleeper stack has been used up.

Rail from Laverton waits to be used at Broadway north.

On this site we will be able to unload future sleeper wagons, and run them through Broadway to the north end by Telehandler. 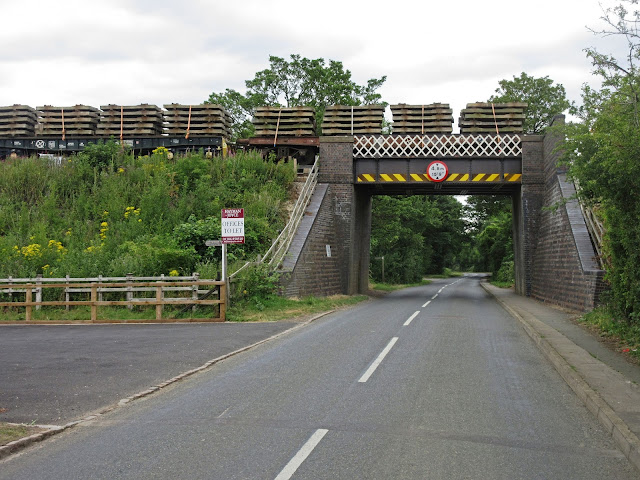 Here's a milestone view: the first train over the Childswickham Road bridge! 320 sleepers are shunted across to the new unloading area. It even rumbled under the bridge - that's a sound the neighbours won't have heard in a long time. 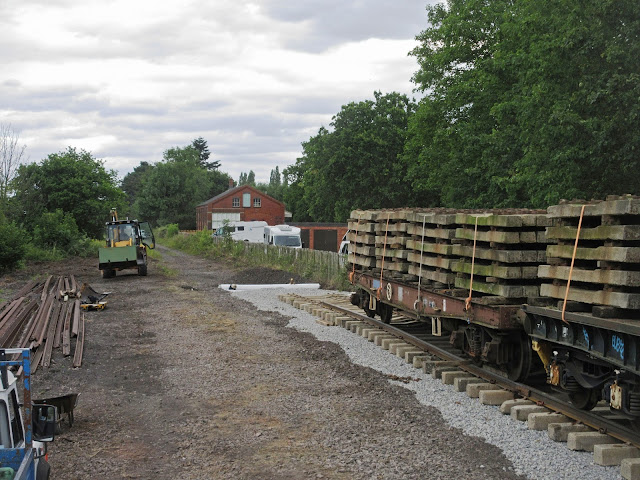 The final shot of the day - the sleeper wagons at rest, after being shunted across the newly laid track today. Rails on the left, sleepers on the right.
The rest of the new rail will be stored for a while now. It is destined for the rest of the Broadway embankment, but can't be laid until the embankment has been released by the soil nailing contractor. In the meantime we will make a start on Broadway north and work back. A buffer stop is being sorted from Winchcombe, and will be taken up shortly.

As readers will know, our friends at the SVR are building a heritage extension to Bridgnorth station. They have consulted Historic England for guidance on their project, and the advice given was, inter alia, was that ''new build elements, and the improvements to existing buildings.... must be evidence based, and of demonstrable high quality.''

The SVR also set up a Conservation and Heritage Committee, whose remit is to oversee all aspects of conservation and heritage, both in terms of proposals for new work, and also have a look at the existing environment and see if there are any ways in which it can be improved.

At Broadway we are very lucky with the rebuild of our heritage station, as we not only have photographs taken during its demolition, but sister station Toddington is nearby and can easily be consulted. 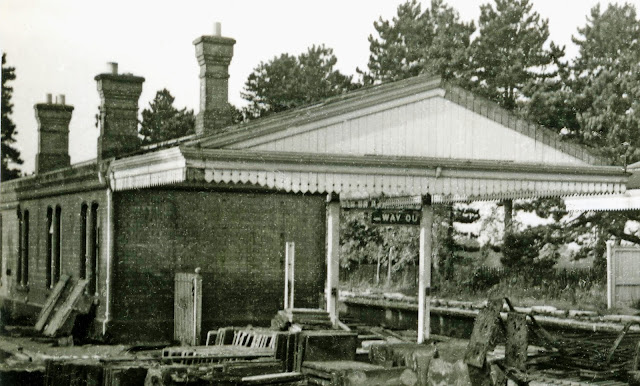 This is one of the demolition photographs. It shows how the canopy end rested on the bottom two footbridge columns, and also that the 21m station building had two large double chimneys, and one small one on the end for the stationmaster. 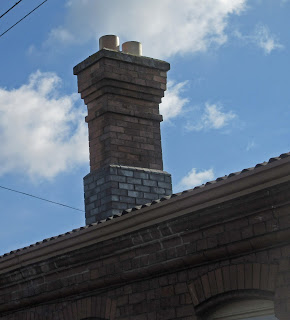 Our new, longer 37m station at Broadway will have two chimney stacks. 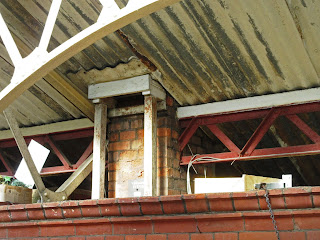 As the chimney breast in the centre of the room is located under the purlin on the forecourt side, the GWR stack was built round the purlin. 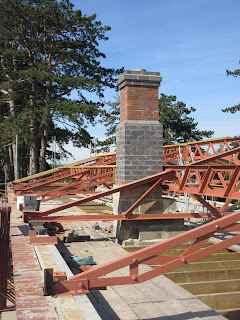 The stack built at Broadway is a single, with a short form  crown on top.


A second, dummy chimney stack is still due to be built.