Today was the day we closed the gap - sleepers now flow uninterupted all the way to the Childswickham Road bridge. 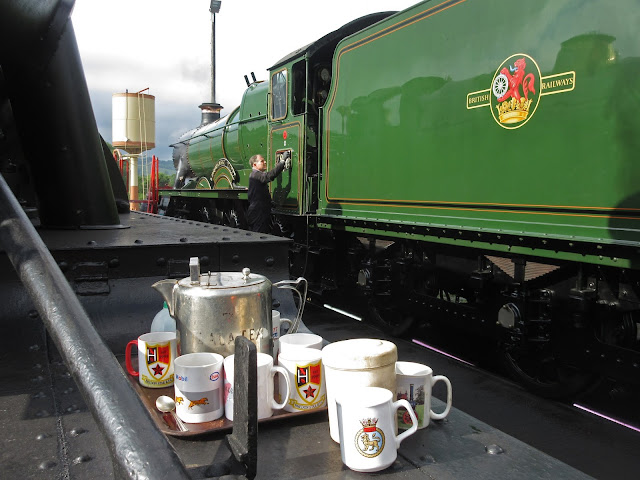 A quick peek into the yard at Toddington revealed that the loco dept was faster at making tea than the PWay dept, who were still turning up when this picture was taken. The man shining the number plate had the most enormous bottle of Brasso. You can't buy that in Tesco's. It's what you need with a GWR engine; if you had a Continental one, say a German 01.10 pacific, you wouldn't need any Brasso at all. Look at that shine though.

We had a new recruit today, Jack. Jack is a student of civil engineering, and for his first day with us he introduced himself with a large supply of doughnuts, for the priveleged ones some were even covered in chocolate. This young lad will go far, we predict. Welcome, Jack! 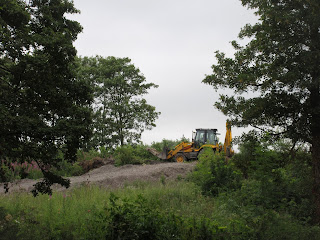 While arriving for work at Childswickham, we immediately noticed a JCB carrying sleepers cross the bridge over the road. Bit of a milestone that, isn't it? We are now stacking sleepers in our new unloading area there, ready to lay track over the bridge and on towards Broadway. 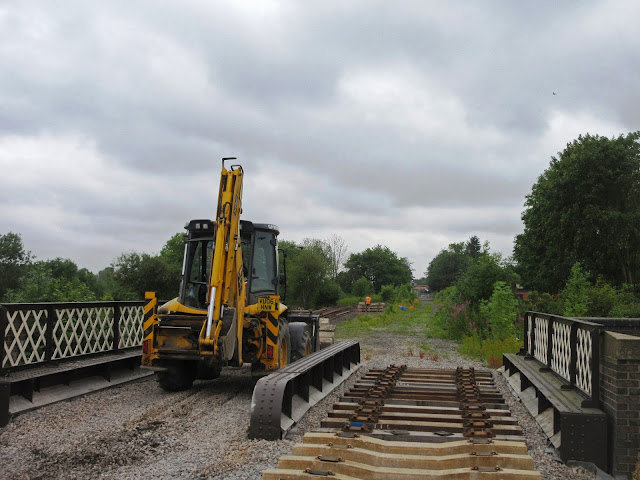 Soon after Stevie arrived with a second load, which was put on the stack at the rear. This area is not used by the embankment contractors. While the soil nailers have left, the site has not yet been released back to us, as some site reinstatement work is still outstanding. 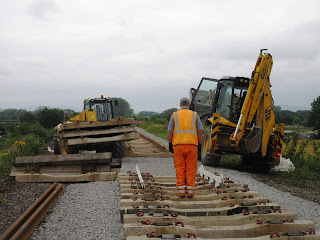 While Stevie returns with empty forks, Nigel is bringing up a much larger load from the supply train at Peasebrook.

At the gap we have left, there is heavy traffic. A bit of a ballet, to let everyone through, and end up facing the right way. 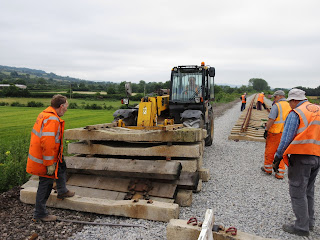 For the next run, Nigel dropped off a balance of 3 concrete sleepers, which we will need today on top of the others already there, including a handful of timber sleepers which will support the crossing of rubber pads. We have decided to close the gap. 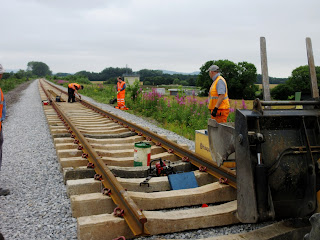 We did - they got a little nudge from Steve. 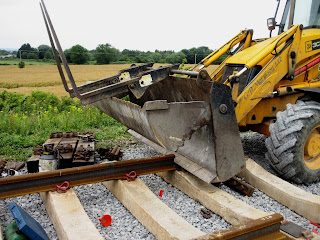 You'd think this was easy, using the front bucket of the JCB to prod the 1 ton rail along a bit, but it wasn't. The length was already fully clipped up, and every time the JCB let go, the rail sprung back into its previous position. It needed a lot of persuasion. 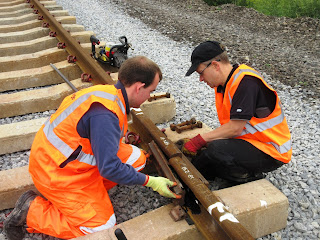 Finally, Leigh was able to insert the bolts through the fishplate and secure this length. We have the 14 rails dragged off the sleeper wagons a couple of weeks back, and we want to get them all in today and safely plated up, as we intend to move the next load of rail on wagons all the way up here.

New recruit Jack is already doing well, he's even got the fishplate the right way up. Top marks here! 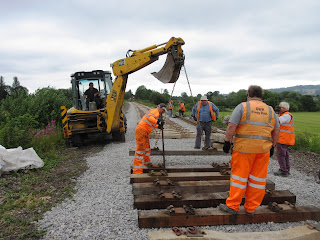 While Leigh and jack were plating up the last length, the others began to close that gap. Timber sleepers are being laid out here, and two sets of rubber pads will be laid on top to allow road vehicles to cross from right to left. 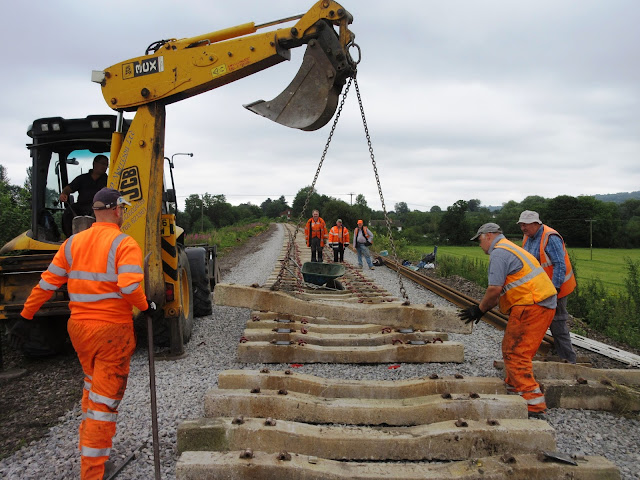 Then the last sleeper goes in, a concrete one. It's a bit of a milestone that, now the sleepers stretch uninterupted all the way from the end of the rails (behind the camera) to a few feet beyond the Childswickham road bridge. 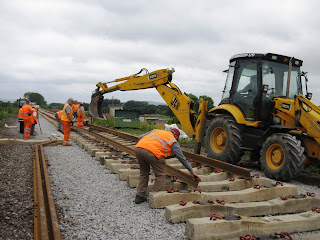 With these two rails we then finally closed the gap, and advanced the rail head another 18m. The future crossing is by the knot of orange jacketed men. It does mean that the Telehandler is trapped on one side, and the JCB on the other, until we have laid the pads in and put some ballast round. 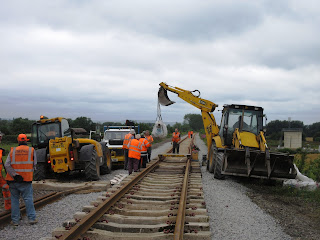 Here's an illustration of that situation. The Landie has arrived from Winchcombe with a large, floppy dump bag of Pandrol clips, which the JCB, on the other side, is unloading on to a trolley. This will be trundled up the loosely laid track to provide Pandrols for the clipping up gang as it goes along. 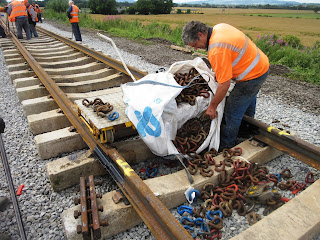 And there you have it - the dumpy bag fell off! We did say 'loosely laid', and so it proved, as the trolley hit a slight difference in height between two rails not yet plated up.

The trolley stopped, but the dumpy bag went on.... 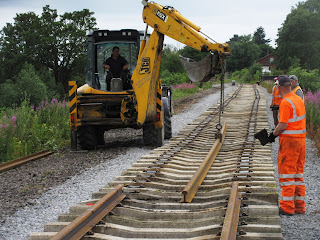 We only had Stevie for half a day today, so as a priority we set about laying in the 14 lengths left in the cess. So doing, we laid 7 panels - 126m - using all the rail we had. More is arriving on Monday. 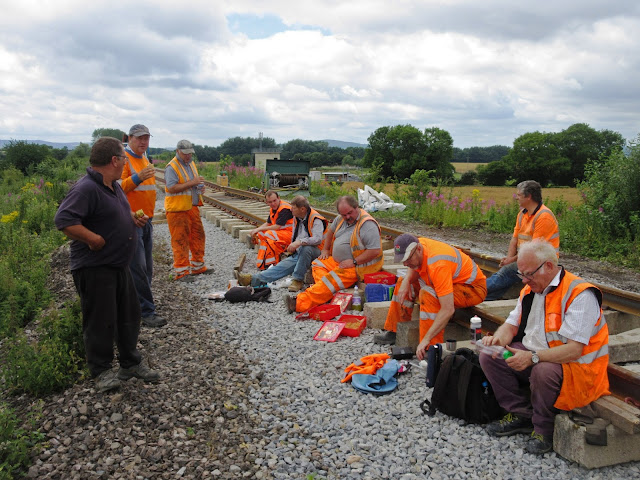 A jolly lunch was held 'al fresco' on top of the long embankment between bridges 3 and 2. Mrs. B's cake baking has, we are glad to report, resumed full production after the holidays, and today we were treated to a new almond and raspberry recipe, which went down extremely well, judging by the fistfuls of cake being held on the left. 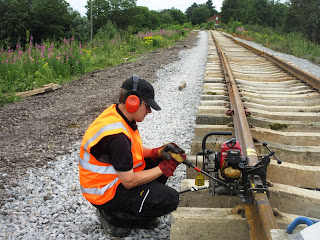 With 7 lengths of rail laid out in front of him, Leigh spent the afternoon drilling all the holes required, so that we could secure them with fishplates. Every other gap of course will be a weld. 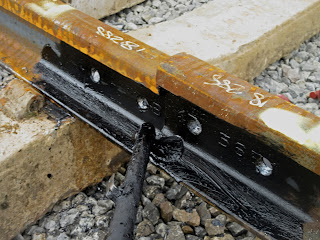 A liberal dose of grease is applied to the rail ends. With a long stick to apply the stuff, and gloves, you'd think you could escape the gunge, but Steve L managed to shuffle backwards into the pot and said it attacked his trousers. And now to drive home in the car.... 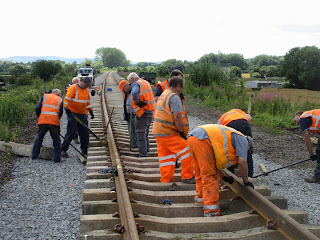 Following the fishplating team, no fewer than 11 other gang members were clipping up in two groups, one Cotswolds, one Malvern. Malvern won by one length, reaching the end of the rail laid first. Behind on the right is the sewage farm, so quickly receded into the distance. 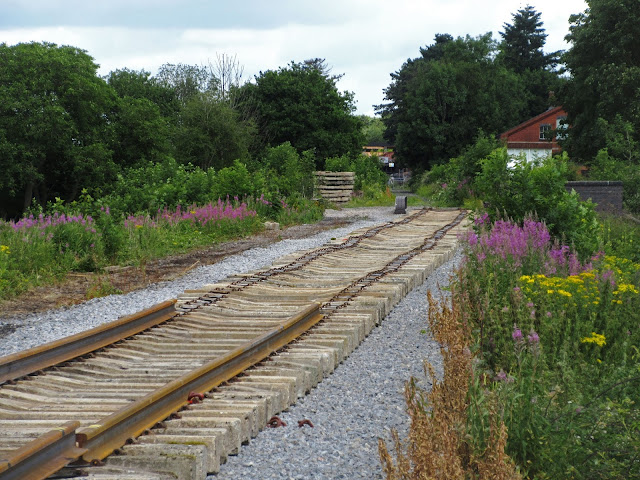 This is where we got to at the end of the day - all the rail that we had left now laid in. The Malvern side is all clipped up, the Cotswolds side nearly so. Another 6 lengths will see us through to the bridge. Another calculation from today is that the next delivery of new rail will take us across the goods shed embankment and to within 4 lengths of bridge 1, the one over Broadway station road. That is approximately where the first turnout will be placed, forming the start of the loop. 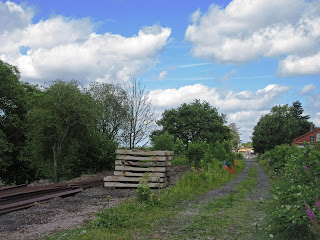 A quick look over the Childwickham Road bridge shows rail, formerly in the Laverton loop, stacked on the left, and in the centre a newly arrived stack of 80 sleepers, all that was left on the supply train which is now ready for reloading with what is left at Skew Bridge. In the distance you can see the yellow streak that is the Broadway footbridge. 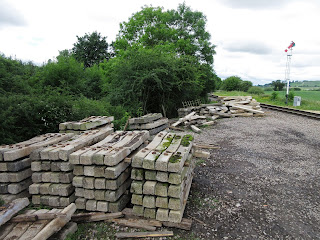 So what is left at Skew bridge? Yesterday 9 piles of 20 sleepers remained sorted and stacked. A few smaller piles of odd ones are in the middle, and two stacks of rejects also exist. We will sift through these to see if any can, after all, be used at Broadway north, near the head shunt. 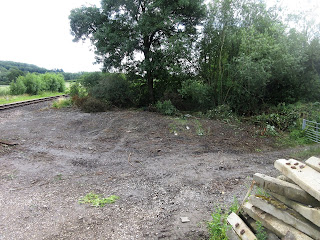 Why the search through the rejects? Because all the others have gone! Unbelievable, but we have taken them all. This area used to contain around 7000 second hand concrete sleepers, and almost all have been used on the Broadway extension, taking the line to the Childswickham road.

We think 7000 sleepers is a lot, but in May a freight train from Belgium to Italy suffered a broken axle near the French border in one of the two last wagons of 25, which derailed but remained attached to the train. They bumped along behind for 13km, damaging 21.700 concrete sleepers in their wake. Now that is a lot of sleepers! (Source: Infrabel)


Finally, a little appeal. We have been looking to manufacture replica door plates for Broadway station, in keeping with the 1904 period. In order to suit the pre-grouping style, they need to have a chamfered edge, not a straight one (which came later). We already have several replicas in store, eg Stationmaster, Booking Office, Tickets, Waiting room and others. With patience and ingenuity you can make up your set.

Earlier this week, we were very lucky to be able to borrow this one from a local museum. The original cast iron plate will be taken to a small foundry to have an aluminium replica made. 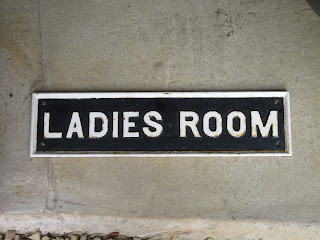 GENTLEMEN and
REFRESHMENTS or BUFFET

Does anyone have one of these that we could borrow? Any offers gratefully received by
breva2011 (at) hotmail.co.uk.
Posted by Jo at 18:25