As the supply train is now empty and we want to keep on laying track, an urgent appeal went out to volunteers to help with further sleeper stacking at Gotherington, and then loading them on to the train. Both activities at once. OK... four volunteers made it to Skew Bridge, armed with hats, water, sun screen, shades. They were needed, we had 30 degrees today, it was really hot. 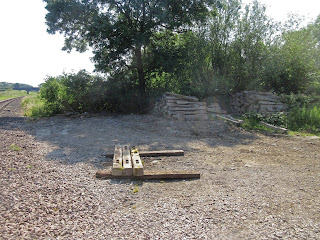 These sleeper stacks are getting smaller and smaller. Three have gone from the left hand side, and the middle one is looking sickly.

In the foreground is the sorting pile, where we park the sleepers extracted to arrange them neatly, and remove any non standard or broken ones. 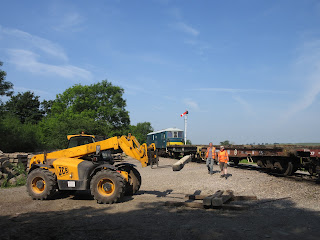 Neil brought the train down first thing. While Lee ran him back to Winchcombe in the car, the rest of us started sorting further sleepers. There weren't enough on site yet to fill the train. 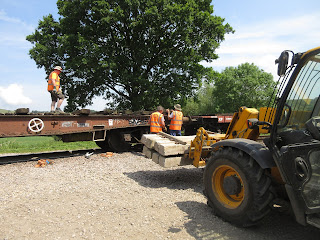 After sorting 60 or so sleepers in 3 stacks, we started loading what there was already. To start with you have to reposition the bearers on the bogie flats, and this is what is happening here. The hottest job today was Paul's, as he was on top of the wagon to give loading instructions, and up there he was a couple of feet nearer the sun than the rest of us, who would have a sneaky rest in the shade between jobs from time to time. 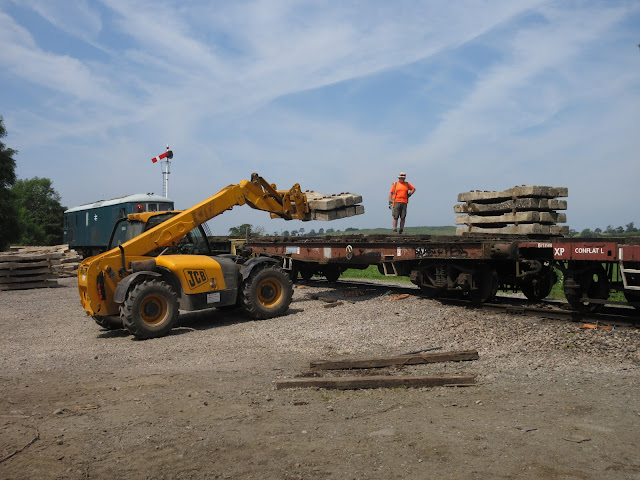 Here's Paul on his own, being grilled by the sun. 160 sleepers fit on one of these wagons, so with 8 at a time you can work out just how many trips that was. It takes quite a bit of skill for the Telehandler driver to get the stacks exactly right, leaving enough room between them to get them off again at Peasebrook without catching the forks on any of the neighbours. 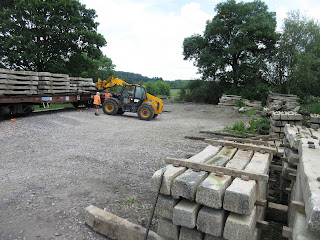 As the first wagon started to fill up, the stacks on the right started to diminish.

After a quick count we worked out that we didn't have enough to fill the train, so we would be sorting some more at the end of the loading. Not a pleasant prospect in this heat, but needs must. 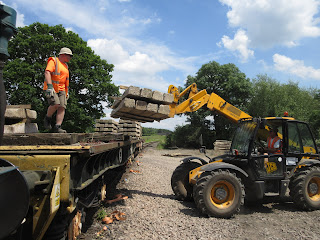 After lunch we made a staert on the second wagon, the first one in the distance being fully loaded with its cargo of 160.

You can see that at this point the 8 sleepers on the forks are arriving at an angle, and this requires careful steering to get everything square when the stack is put down. Lots of to-ing and fro-ing until it's just right. 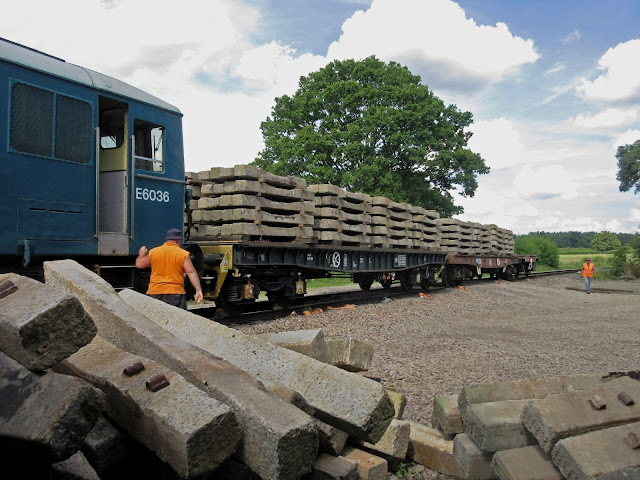 Towards the end of the afternoon - we spent 8 hours in the heat there, with 15 mins for lunch - Lee went off again to fetch Neil. having loaded everything we could, we had to resort to further sleeper extraction and sorting to make up the last few piles on the wagons.
In the foreground is a jumble of rejects (cracked, broken clips, rebar exposed etc) and on the right some non standard ones that we have put to one side, but will use later.
All in all, we sorted 80 sleepers, and loaded 320. We didn't manage to put any on the Conflat (which has room for another 40) as we started to suffer from heat exhaustion, leading to mistakes and short tempers. That's when it's time to stop. 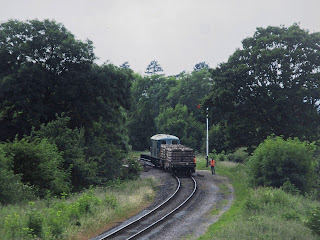 Here is the loaded train seen from 3 arch bridge. It's just about to leave, after putting on the straps and a few last minute checks. Just beyond is the Skew Bridge and then Gotherington station. 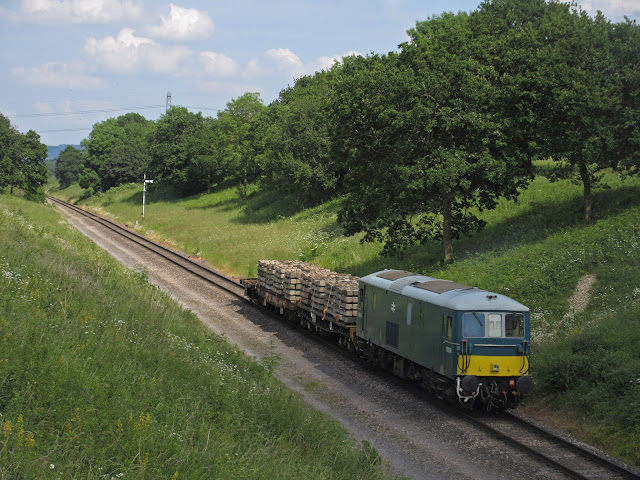 Slowly the loaded sleeper train trundles down the line, heading for the extension. With this load, we will reach Childswickham bridge, and have a bit left over to cross it and start a siding on the Broadway side.

Following the appeal for help with converting an mp3 file in the last blog, several readers offered their help, which is very heart warming. Thank you all for getting in touch, it was very kind of you.

The 4 sound recordings have now been converted to video format, and the first one has been uploaded to YouTube. Here it is:
https://youtu.be/t0lL0LdNRCE

It is quite amazing that after 50 years original sound recordings of steam hauled trains at Broadway have surfaced. For this we can thank Brian Parsons, a Broadway resident at the time, and former Worcester based steam fireman. Brian took numerous photographs at Broadway in the early 1960s, but also 4 recordings made on a portable reel to reel tape recorder, to which he modestly confessed only recently.

Brian was very kind to allow these recordings to be shared. the photograph on this first one is by his fellow Broadway train spotter John Diston (see also his 1960s steam album on the Flickr site, accessible via the link on the right hand side of the blog).

If there is anyone else out there with photographs of the Honeybourne line in steam days, we would be happy to put them on the blog. Now enjoy the sound of the 9F dragging its iron ore train past the goods shed.