A record 17 turned up today - was it because of Jim's last cooked meal before the hotter summer season? In any case, it enabled us to motor on at speed, despite an initial setback.

Wot initial setback? Well, try to park your car in here! With all this track laying going on, the distance to the railhead from your conveniently parked car gets longer and longer. Finally, we cracked and said, look, we have to find somewhere nearer. Steve knew of a strip of land we own near the Childswickham Road bridge, so we arranged to follow him. First, a bit of tree clearing, no issue. Did you mention that before we agreed, Steve? 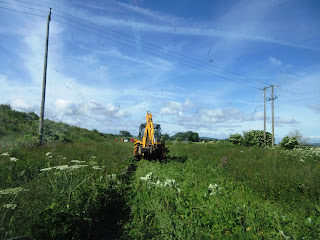 Although we consented to follow Steve, it was still a small fleet of cars that hesitantly entered this field of waist high weeds, with Steve heading the charge. He does have 4 wheel drive though, and he could dig his way out of trouble. Not so the Polos, Renaults, Audis and even a Vauxhall van that tried to follow. 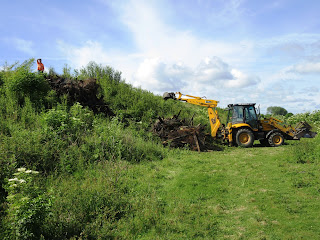 Next came an enormous tangle of abandoned fencing material, which Steve scooped off the embankment slope, to give us a route to scramble up. It was like the cat had got your mother's knitting! 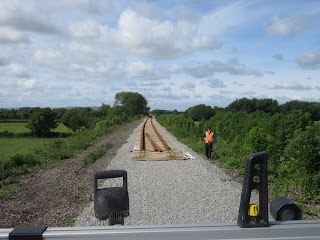 After a short trip with the Landie down to the sewage farm, we found the rail head as left last Saturday. The last two rails were there, and the empty rail wagons can be seen in the distance. We have just started to lay into the curve into Broadway. 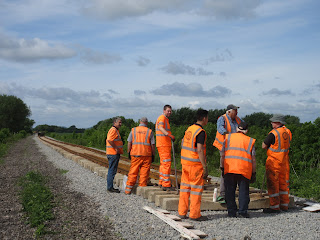 The gang is all dressed up but with nowhere to go. Pesky teenagers not only broke into our mess coach, but they went and stole our rope for marking out the line where the sleepers are laid. They left behind numerous plastic wrappers for orange squash and ice cream.
The rope isn't worth much, but when you can't lay without it, it is priceless. 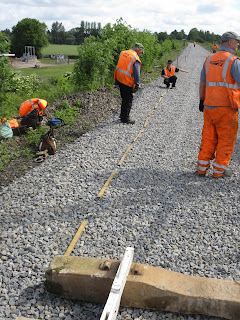 We hunted round the site to see if we could find it abandoned somewhere, or if there was more rope available in the site safe, but no luck.

In the end, we set off with this 'wooden rope' where Leigh and Peter lay out some battens along the ground. It got us out of trouble and we were able to start laying the remaining 150 or so sleepers left on the train. Necessity is the mother of invention... 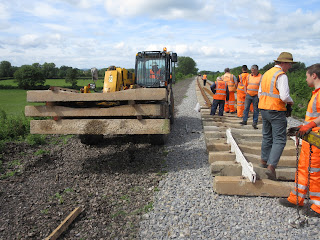 Then Alan arrived with the Telehandler, laden brimfull with 12 sleepers. Great stuff, we can get going. 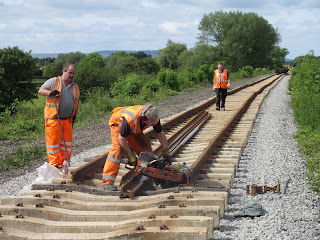 We put in the first 26 in order to lay the last two rails, but before doing so, we needed to square them up. Now that we are entering a curve, the inside rail keeps trying to overtake the outside rail. 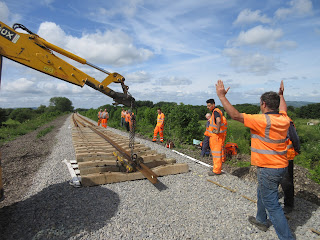 Then we are ready. Steve drags the last pair of rails on to the new stretch of sleepers, until Paul signals that they have come far enough. 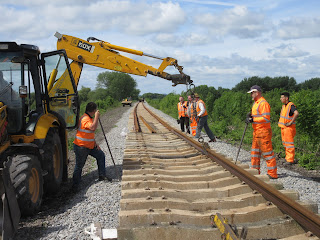 The last pair goes in, we are 18.2m nearer Broadway again. In the distance you can see the Telehandler approaching with another load, while behind the camera the other half of the gang continues to lay sleepers. We need to empty the bogie flats, as arrangements have been made to fill them up again as early as this Monday. 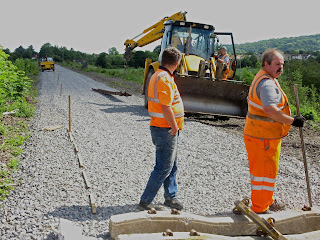 Then comes the interesting bit. With this last pair of rails we come to the end of the next 1000m of CWR, and also the last bit of continuously welded track. For this you need an expansion gap, provided by an installation known as a 'breather'. Or as us from 'darn sarf' would say, an 'eavy breaver'. It's two pairs of rails with tapered ends that can slide into each other. Steve here brings down the first pair. 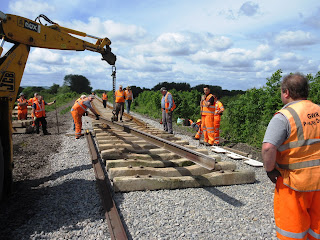 The first rail with a tapered end is lifted into position on a further lot of concrete sleepers. The pointy end is nearst the camera, can you make it out? 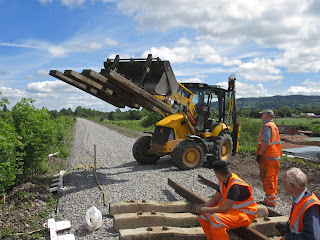 Then comes the central section, mounted on four timbers and fitted with special chairs that allow the rail ends to slide to and fro with the expansion caused by the varying temperatures. 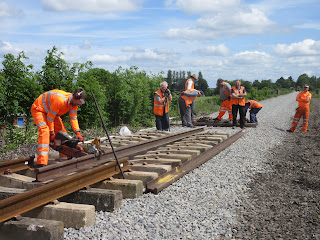 The tapered rails we use have obviously been installed before, so have an old weld at the butt end. This has to be cut off, as we cannot have two welds next to each other. This could lead to fractures. 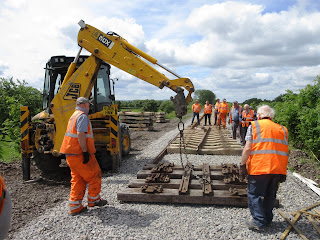 The central section is then placed into position at the end of the CWR track section. How lucky we are to have that JCB, this is heavy stuff. 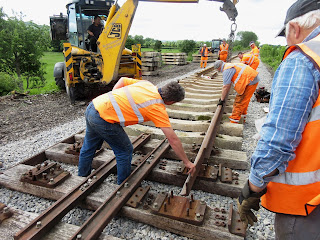 Finally the first tapered rail is carefully laid into the special chairs.

They have angled plates bolted to them, which hold the rail down, but allow it to slide back and forth. The two bullhead rails in the middle just hold the whole thing together. 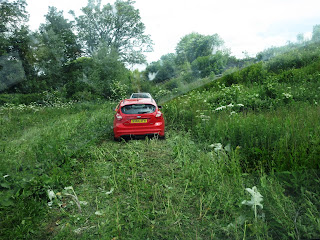 Now to get out of that field with the waist high grass again. This car had to have 2 goes at the slope at the end, in order to shoot out out on to the road, under the guidance of a banksman.

Lunch was in the mess coach, now safely back at Toddington. Sadly it is clear that we can't leave it out along the line, even if half a mile from the nearest access point. Jim treated us to sausages, chips and beans, while Mrs. B tempted us with a chocolate, and a raspberry sponge cake. Oh, the choices. Of course, you could always have both... 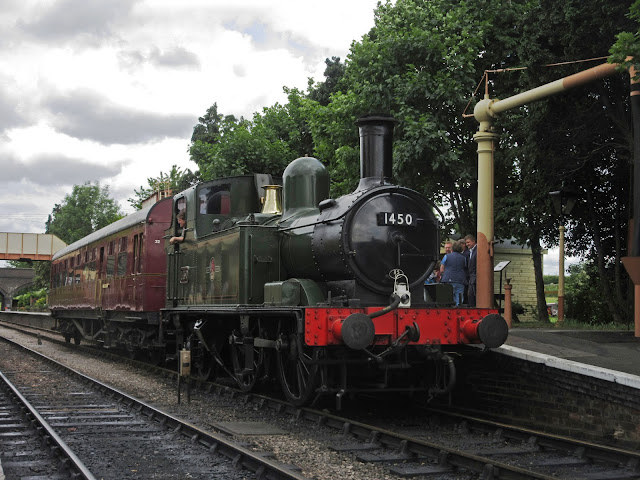 Returning to Toddington (and the 'real world') we found no fewer than three coaches in a very full car park, and, during a quieter moment, this lovely scene with the delightful 1450 and 'Chaffinch' the auto coach. Enjoy it while it lasts, they'll be going home again soon. 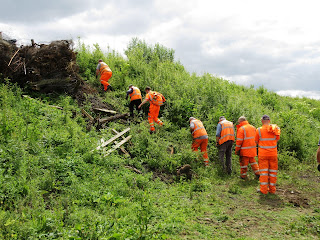 Doesn't this scene remind you of the Klondyke gold diggers doggedly climbing up the frozen hillside? 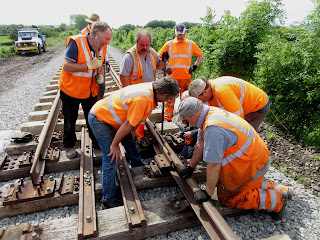 Both Toddington end breather rails are now in, and here one of the Broadway ones is being wriggled into place. The distance between them, represented by a diagonal gap, is calculated from a formula in a book. 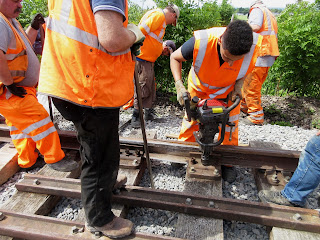 When the rails are where they should be, they are bolted down with the nut runner.

Here it's the turn of the Malvern side. 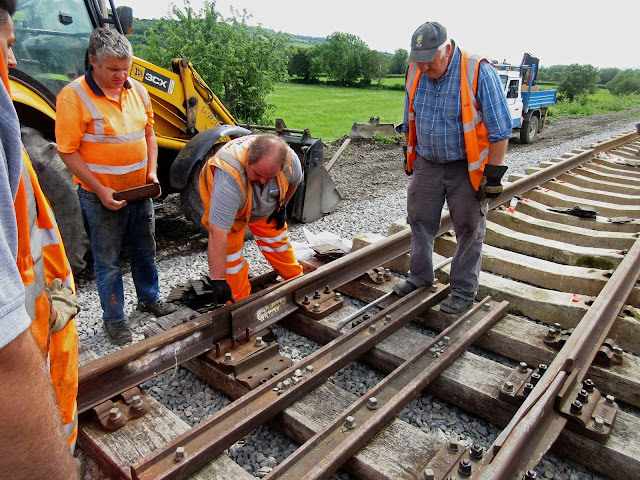 Just about finished here with our breather joint. Paul holds the last plate, due to go on to the 3 bolts at his feet. Can you see how the rails slide past each other? Wheels that pass over the top do not feel this joint, and there is no 'clickety click'. From here on onwards, we will be laying alternate welded and fishplated joints, i.e. rails of 120 foot length. 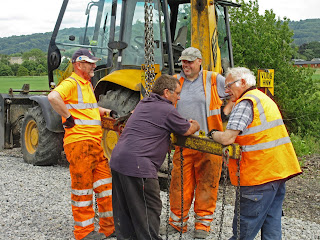 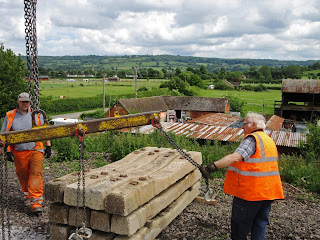 OK then, alright, we'll lay a few more. Got to empty that train. The view here has moved on a bit, no more Peasebrook farm, this is Halling's garden machinery business on Pry lane. That's a Broadway address! 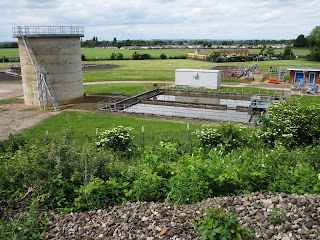 On the other side we have moved on past that sewage works tower. It's not a pretty sight, but it does a useful job for the community. 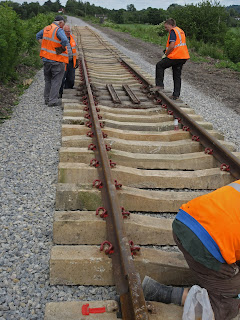 Here's the breather joint fully installed, with central section and all 4 rails cut and clipped into place.

Beyond the sleepers continue for a few more lengths, but we've run out of rail. No worries though, more is coming on June 12th, just over a week from now. And at Gotherington there is more than a complete trainload of sleepers, all ready and waiting to be loaded. 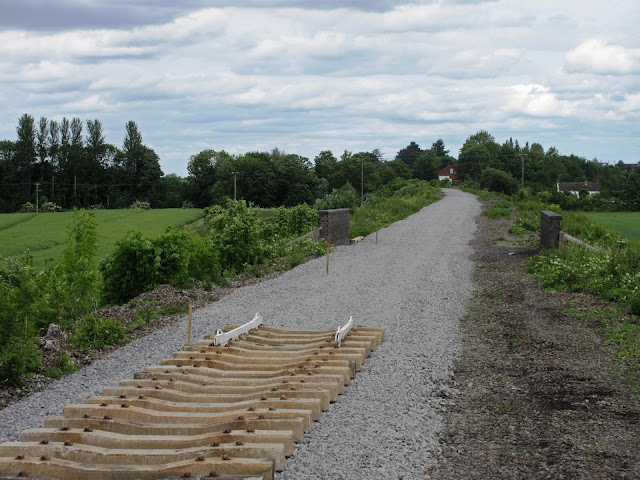 Our final look today. The end of the sleeper run is a stone's throw from Pry Lane bridge. That's only 2 more panels, something we will easily achieve next time. Note that, as we approach the goods shed in the trees, the new ballast starts to swing over from the LH to the RH side of the former double track.