''Someone left the heat on''

... was the comment of a passing volunteer first thing. It was 26.5 degrees C today, the highest yet this year. As it was on Wednesday, there was no shade, but there was a new wrinkle: the wind now blew from the south, or in other words, over the sewage farm and then on to us. Argh ! 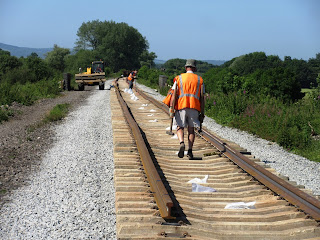 Here we are, setting up shop this morning. Alan is bringing up the first load of sleepers, while others are distributing Pandrol clips in the white sacks that you can see.

- Clipping up the 20 rails laid on Wednesday,
- Laying more rails to the end of the sleepers laid out the previous Saturday, and
- Laying the remaining 84 sleepers on the bogie flats. 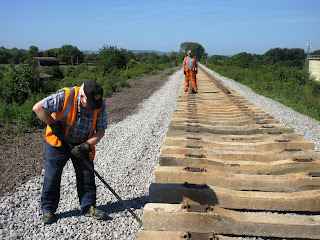 To make use of the time waiting for the first rail to arrive, we straightened up some of the last sleepers laid. This makes it easier to get rails in. Bert Ferrule calls out the inches required, Cotswolds side or Malvern. 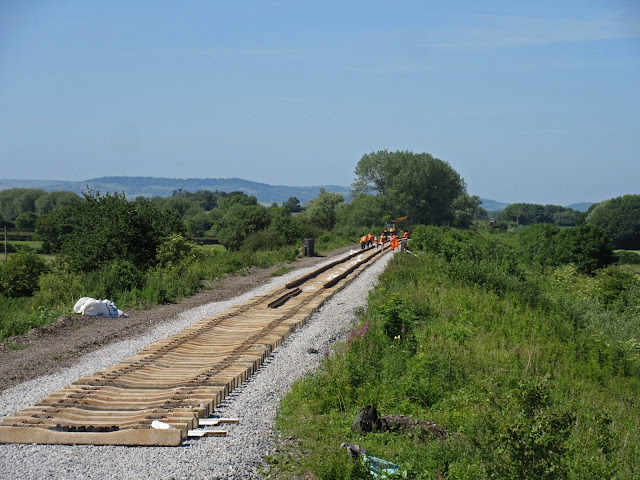 Here's an overview of the site this morning. It's still relatively fresh, but the azure sky promises heat, and we got that OK. It was cloudless.
The clipping up gang is busy in the distance, while behind them you can just make out the JCB, bringing up a second rail. We put them in in pairs; this is logistically better, as we have to coordinate occupation of the LH trackbed with the movements of the Telehandler, which is also running up and down with sleepers from afar. 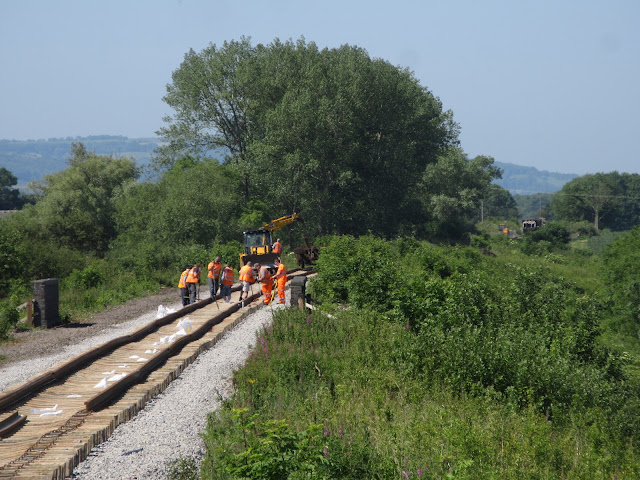 To illustrate the logistics along the road, you can see Steve here pulling a rail off the bogie flat, while a yellow smudge in the distance represents Alan, who has almost reached the sleeper wagon. 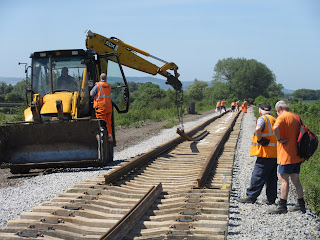 The idea is that Alan reaches the railing activity, just about when they have finished lifting the two they fetched. The JCB then proceeds to the end of the sleepers, to let Alan through. 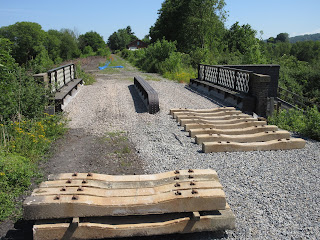 Alan is emptying the last 84 sleepers off the bogie flats, and is bringing them up to the Childswickham Road bridge, where they are being stacked for use later in the day - the job of the rail laying gang, when they have finished. 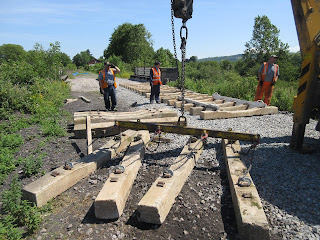 The rail laying gang laid 4 panels (8 rails) today, so bringing the railhead up to the end of the sleepers laid last week.

Then that gang moved on to the bridge.

Meanwhile, the clipper uppers continued far away. That was today's hottest job. They achieved 6 or 7 panels - at the end you are so tired, that you don't care about the exact number any more. Nobody could remember, it was a haze. 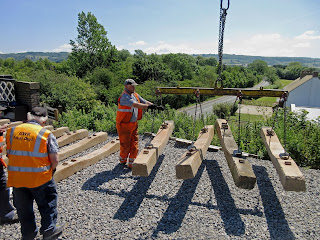 Here is the first batch of 4 sleepers being laid at the bridge. The first 8 were laid last week, to start us off.

Beyond is the Childswickham road, and on the right the site of the former Titchmarsh and Hunt corn merchants, which suffered a bad fire in 1939. You can read about that here:

How interesting that the fire was first noticed by an engine driver. Also, that this spot is near the throat of the Broadway goods yard, which was down a steep slope. Was there a connection, we wonder? 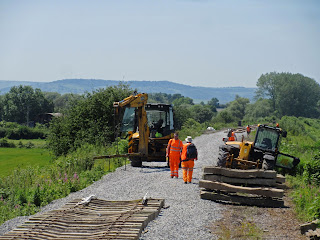 Here you can see the row of sleepers, started at the bridge, begin to take shape on its way southwards.
In the distance is the railhead, now fully railed up. Work has paused, as people find their kit to go and find a shady spot for lunch. But there isn't any shade.

Well, we did find some, by looking in the other direction. 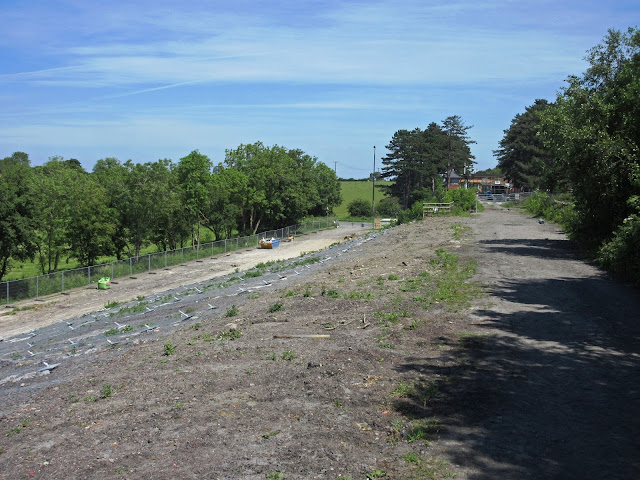 We had our picnic in the shade of the trees growing by the goods shed. The soil nailing site is now silent. It has been completely vacated by the soil nailing contractor. A skip remains; there was also some left over cement, which they were kind enough to donate to the Broadway gang. 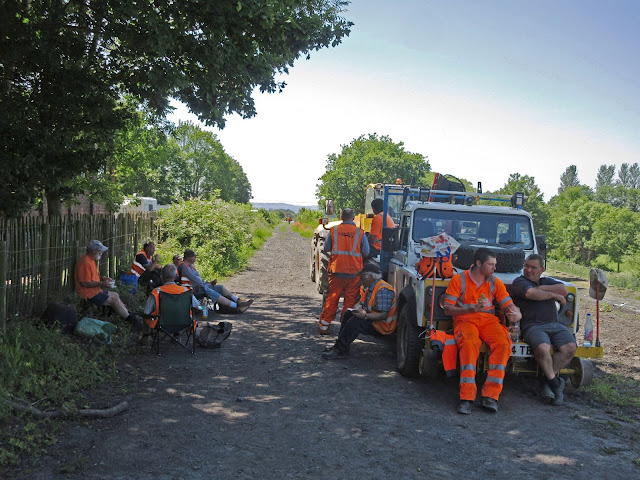 Here's our shady picnic site, the only bit of shade for miles around. The really experienced among us - Paul and Jim - brought their own folding chairs to sit in. Us mere mortals had to make do with what we could scrounge: an upturned bucket, a bit of old sleeper, a standing up lunch, or a seat on the front bumper of the Landie. But is was cool, which was the most important. 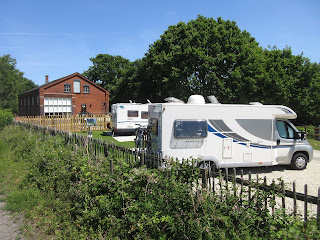 Our neighbours are making full use of the land we sold to them; some of the motor homes were parked only 6ins from the fence. 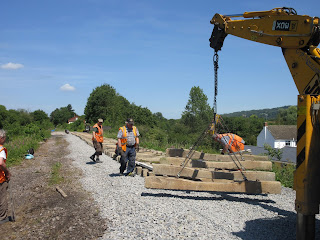 After lunch it was back to work. Really? 'Fraid so.

We laid the remaining concretes heading south again. A largish gap still remains, before we can join up with the rail head. Calculations today found that another 260 sleepers will see us fill the gap, and advance 100m over the bridge to a new unloading area. When this is reached, we can stop having to drive for 3/4 mile to get sleepers and rail, we'll be able to bring the supply train up, as the Broadway embankment (the bit we own) is three tracks wide, which gives plenty of room for storage and unloading. That will enable us to bring sleepers to Broadway north, from this point onwards. 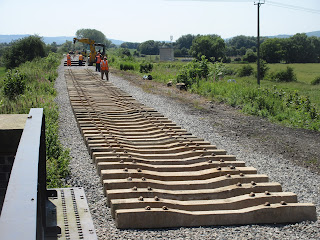 After we laid the 83 sleepers remaining on the train - one was a reject, with a broken off Pandrol end stuck in the eye hole - this is the scene by the bridge today. What's still left to do is lift in some hardwood sleepers we have to go on the bridge itself. They're in a pile at the back. 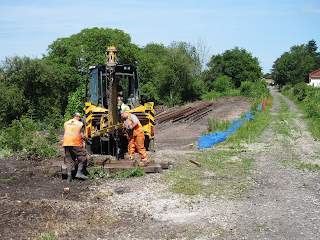 Alan brought them up in the Telehandler, and stacked them in our new storage and handling area.

This is us taking the first few steps on the Broadway embankment! 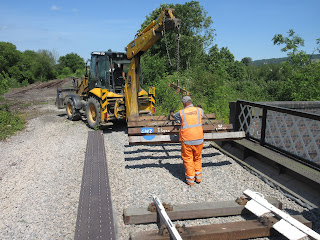 Once they had been attached to the lifting beam, the hardwood sleepers were lifted into position on the bridge.

To go any further, we need to clear the hedge line, and get a small supply of fresh ballast for the 100m that we will go beyond. 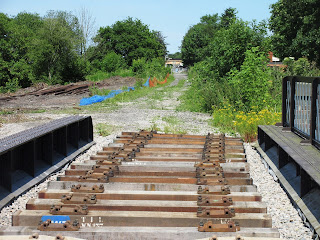 As you can see, the hedge line on the right needs some serious cutting back, before we can  continue laying track.

In the distance is the Broadway footbridge. We could see heads bobbing about on the scaffolding around the canopy. Soon we will meet.


By mid afternoon, we had run out of sleepers to lay, and vacant sleepers on which to lay rail. It was decided to empty the supply train completely, and in this way the last 14 lengths of new rail - delivered only Monday of this week - were dragged off and stored in the four foot. The sleeper wagons now need refilling, a job pencilled in for next week.

Finally, an appeal to the blog followers. We have a couple of original recordings of trains passing through Broadway, and would like to put them on the blog. To do this, the original mp3 files need to be converted to .wmv format (a movie format, which allows them to be posted on YouTube)

Is there anyone who has the software to do this? The files are only about 1Mb each. You can contact the blogger at breva2011 (at) hotmail.co.uk.

Thanks for your help. If we're in luck, we can listen to a 9F clanking past the goods shed in 1966.