A small team of three started riveting the canopy at Broadway today. The canopy, if you recall, consists of trusses, purlins, ridge purlins and fascia boards, all manufactured as a kit at Toddington.
Everything is assembled at Broadway now, and the next job is to rivet all the elements together for a tight, rigid construction.. 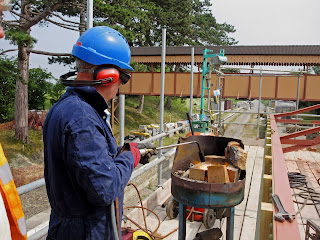 The first job was to go along the fascia board, where about 100 temporary bolts need replacing by permanent rivets.
The individual rivets - in two sizes - are heated in small batches on the spot. It's quite simple really. 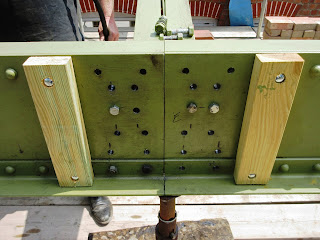 Here's a typical riveting area, the place where two fascia boards and a truss end meet. Most of the bolts have already been taken out (not all of them, obviously!)

The pieces of wood are noggins, to which the dagger boards are attached. 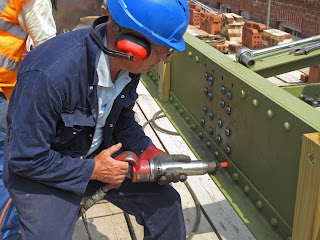 The hot rivet is inserted into the hole, and two air powered rivet guns are used at opposite ends to secure the rivet with two nice round heads. The process is very brief, a short 'Brrrrrt' and it's done. It's not like building the Titanic. 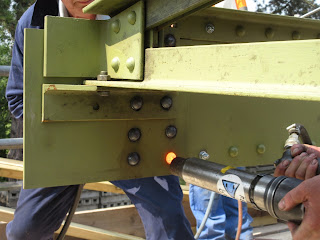 The team was up there all day today. While it was slightly cooler than say Monday, the sun still came out, and a lot of drinks were consumed. Amazing that some of the gang wore overalls!

This is the last rivet that went in today, on the southern end of the run of fascia boards. They are all secure now. 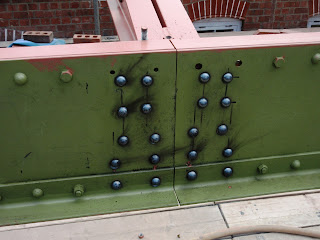 Twenty rivets do one truss end, as fully completed here. After setting up today, and a bit of experience gathering, it went really well. If it hadn't been so hot, we would have done more. Sweat was seen running off brows, by 3.30 we had had enough. 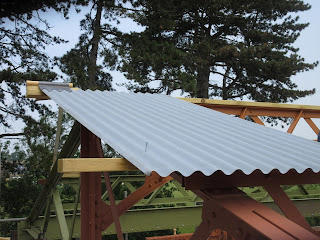 A trial piece of corrugated iron has been laid in place.

To save money, the sheets were bought thinner than they used to be. 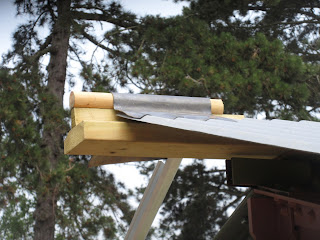 This is a detail of what the ridge will look like. A length of lead flashing is wrapped over the top. The white bar in the rear is a trial piece of glazing bar, which has been sourced from a manufacturer of GWR replica glazing bars. The actual supply will be pre-coated in the correct colours.

Further drilling of rivet holes is still required, although more than half have already been done. Tomorrow is a drilling day, and Thursday we hope to get another riveting day in (if you see what we mean!)

While travelling to Broadway, we paused briefly to admire a blue field of flowering flax at Laverton. Would a train come by? 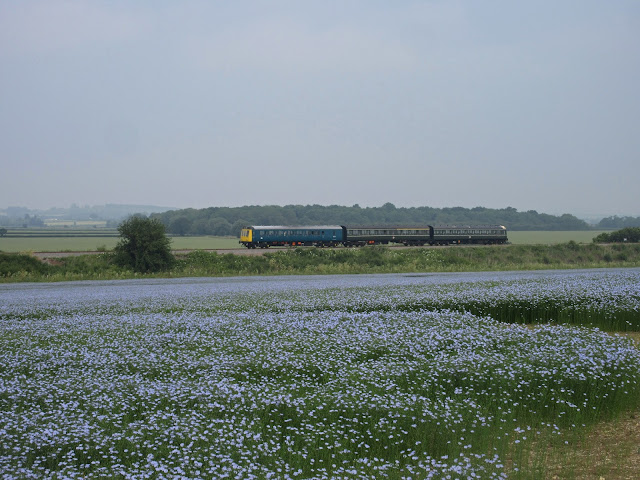 Yes, it would! Here it is - pretty, isn't it? That's the GWSR for you, on its Broadway extension. This section of new track was recently taken into use with the gala. It's just north of Laverton Bridge, on a stretch once roughly laid to park the extension train. 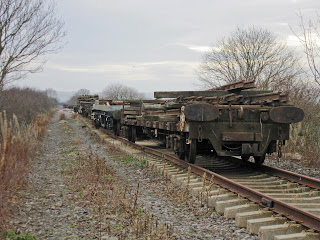 The track was laid very roughly, and to make it useable, it was all taken up again, and then relaid in CWR. 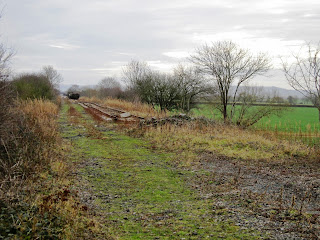 This is what you could see if you had walked south from Broadway. Some bumpy track that peters out in the middle of nowhere. Haven't we come along way? This was 2012.

The train now purrs along here, people have remarked to us how smooth it is. Well done the PWay gang, it's a professional job. 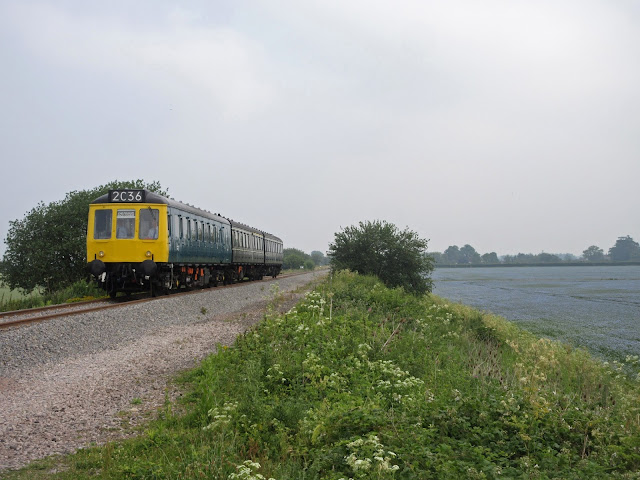 On its return journey from Little Buckland back to Toddington, the DMU passes the same flax field, now seen from a pile of old sleepers. Even the DMU is blue. 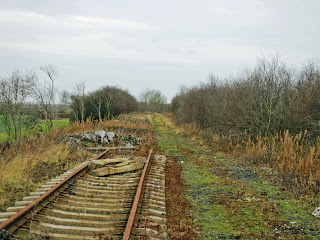 Pretty much the same spot, also seen during a trackbed walk in 2012.

If you contributed to our share issue, pat yourself on the back. Go on. You helped make it possible.