Today we had two teams on the go - one stacking sleepers at Gotherington and then at Winchcombe, the other laying in rail and clipping up on the extension. A new supply of 42 rails has arrived, was loaded on to the bogie flats at Toddington and then pushed along the new track as far as it would go. 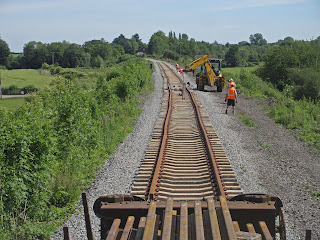 This is the view from the newly reloaded rail wagon, one of two, and it has 21 new rails on it. Ahead of it a few more recently laid panels, then, where the JCB is seen dragging the first rail of the day, just sleepers. Our mission today: convert these empty sleepers into track! 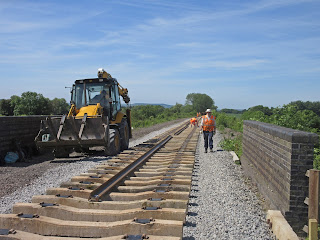 As we were without the Camlock for the first hour or so, we decided to drag up the rail and just lay it on top of the sleepers for a while.This would save time later. 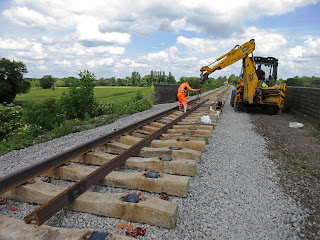 Finally the Camlock arrived, and we were able to commence actually putting the rails in their place.

All this is taking place on a bed of ballast on top of Terram, put there a few months back, and levelled out by Steve.

It is as level as a billiard table.... 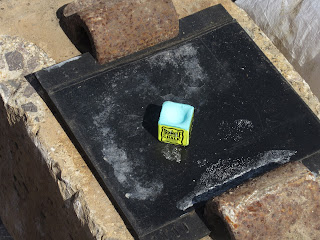 That being so, this is taking things a bit too far.

It's some billiard table chalk, found on site. Weird. 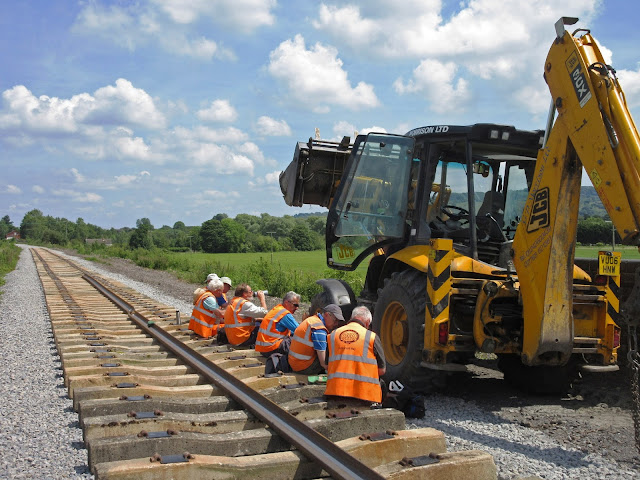 The day was quite hot, despite the skidding clouds. We covered ourselves with sun cream and wore hats, and more than one of us had the remark how brown he was looking these days. Well, we are out in the open a lot. There was no shelter at all, so for lunch we asked Steve to park his trusty JCB in front of us, so that at least the front parts of our bodies were in the shade. As you can see, our team was quite small, with only 9 of us at Pry Lane. More were at Gotherington and Winchcombe of course. 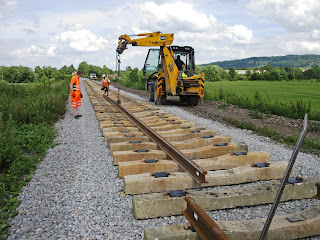 We laid track over Pry Lane bridge and continued northwards, trying to catch up on the 260 sleepers laid on Saturday.

In the end, we laid 10 panels, or 20 rails. That makes 260 sleepers exactly, so we have reset the counter here. However, there will be further sleeper laying on Saturday, when we will clear the last 84 off the wagon, so that the train can be taken down to Gotherington to be reloaded. 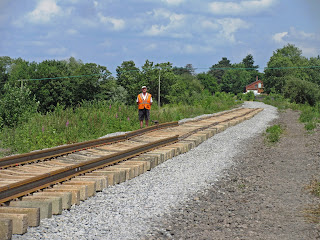 Under the hot sun, the work on top of the embankment was exhausting. By mid afternoon, we began to flag - some of us are 70 years old! We gave ourselves the target of clearing the first wagon of new rails, and we did this, leaving an odd one on board (we prefer to lay them in pairs). In this picture you can see the rail head at the close of play today, with one more rail to go in. Ahead of it lie more sleepers, but it's clear we have almost caught up. 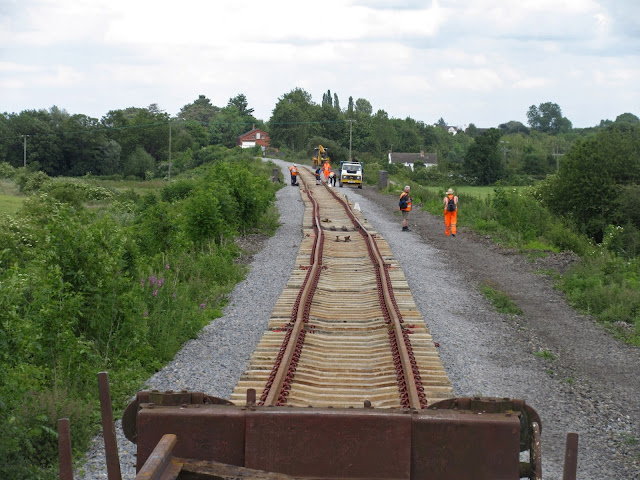 This shot is taken from the same place as the first one. Rails now reach beyond Pry Lane, on the home stretch to the Childswickham Road bridge. All this still needs clipping up, drilling for fish plates, fitting them, and welding every other joint. However, there is no further need for manual sweeping, temporary clipping up, or stretching. We are now off the CWR. 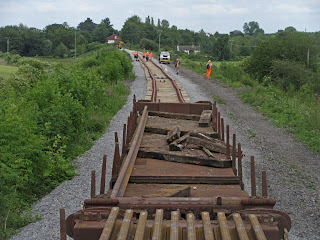 This shot is off the second rail wagon, showing the first one almost cleared. Those rails were on that from Monday to - Wednesday!

We don't hang about here.

The clipping team achieved 3 panels today, or 312 clips pushed in, with associated plastics and a lot of sleeper levering about to make it all fit. 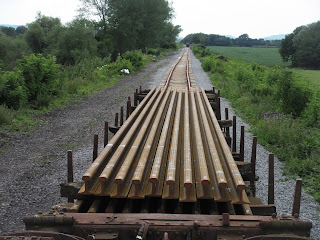 Looking the other way, here is the second wagon, still with a full cargo of 21 rails.

Further along is the place where the welders stopped last time, and way back is the rest of the supply train, parked this side of the new stop block.

The welders are expected to return to us very shortly. 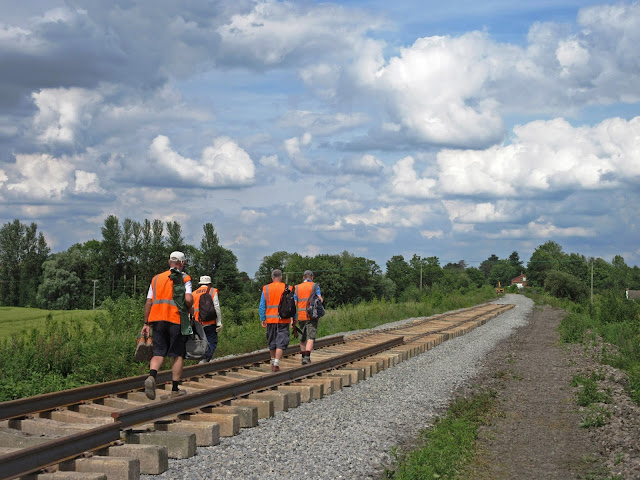 At mid-afternoon, the weary team trudges home to the new car park below the embankment on the left.
The way the rail in the left foreground hangs in the air is an indication of the sort of difficulties the clipping up team meets. All the sleepers have to be levered about, and many don't want to, as they have 2 tons of rail resting on them. It's slow work.


We still have approx 190 sleepers to lay into the gap in the distance, then we can lay the rail all the way to the Childwickham Road bridge. Although nothing has been decided yet, one interesting option is to push on over the bridge for a further 100 yds and then establish a new base where the embankment is at its widest. From there we could push on to the station. The soil nailing itself - site reinstatement still to come - was said to have been completed now.