A full crew today, a full sleeper train, and Telehandler as well as JCB on site.
We have a gap to fill at Childswickham. Let's get going, let's attack that pile of sleepers.
The day starts with a briefing at Toddington. Lots of excitement in the yard, almost didn't get in. What's going on?

We hurried out of the Toddy car park and headed for the little car park of our own, at the foot of the embankment at Childswickham. 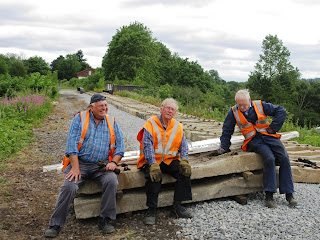 After arrival at Childswickham, there wasn't much to do while we awaited the arrival of more volunteers, and the mechanical handling department.

This is where we left off last week, after clearing the supply train of its last 84 sleepers. 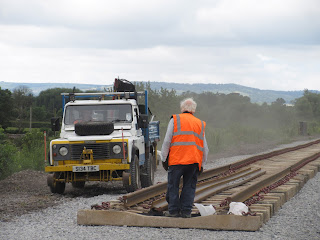 After a while, a huge dust cloud appears on the horizon.

A welcome dust cloud, as it signals the arrival of Paul in the Landie with the bits.

We throw out what we need, and leave the rest to the clipping up and rail drilling team further back. 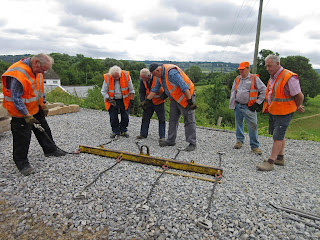 One of the things Paul has brought is the spreader bar. Now we can have a game of guess where the hooks go.

That one goes there.

It has to, because this one is here and that one over there is this way round. So that one has to be that way round.

If you say so Neil. 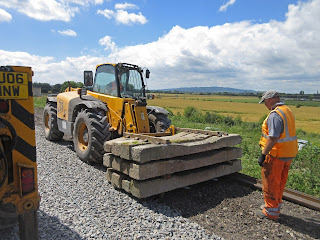 Finally Alan arrives from miles away with a  goodly stack of 12 sleepers. At last we can get to work.

With Alan comes the sun (we don't understand this, Alan is from Scotland) so things get a lot more pleasant around here, without it being as crushingly hot as earlier this week. 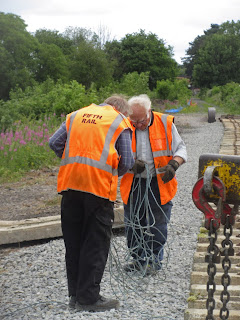 The very last corner of the PWay budget was searched, and a modest amount of money secured for a new alignment rope. It came with free knots.

Pete and Mike investigate these, to see how long we can make this piece of string. 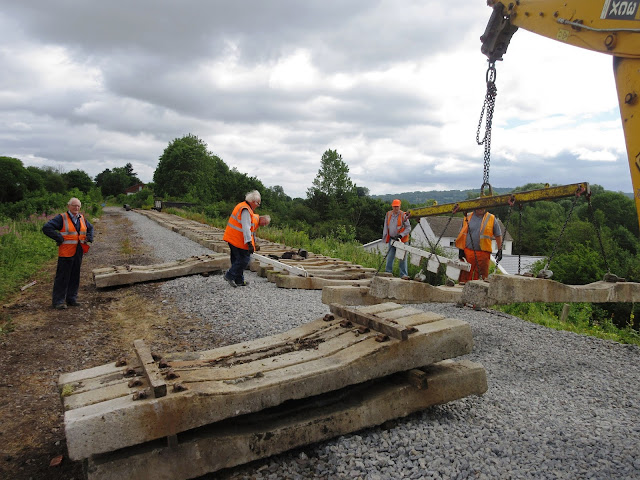 After the team is split into two, half to start fishplating the newly laid rail north of the breather (and end of the CWR) and half to lay sleepers. Finally we can swing into action. We start adding to the 84 laid last time, working back south from the Childswickham Road bridge to reduce the size of the gap we left. 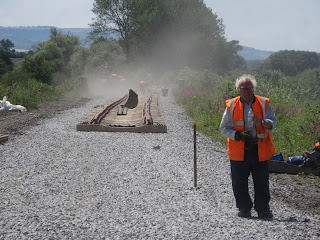 After delivering his load of twelve sleepers, Alan raises a dust cloud as he bounces back down the track to the other side of Peasebrook Farm. We lay the twelve, then have a breather. 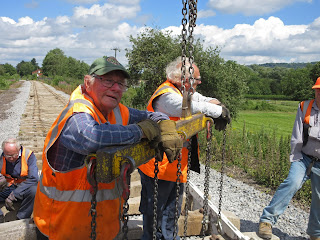 The spreader bar is just the right height for leaning on. 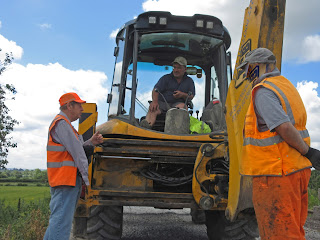 Jim and Bert use the time to chat to Steve, who has declared summer officially open by wearing shorts. Does the Met Office know? 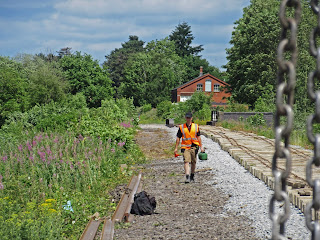 Behind us the rail drilling team is busy, but they hit the usual sort of problems you get - the bits get blunt, or they run out of petrol. Now where is that can? Paul dropped it off where?

It's a long walk back from the bridge for Leigh. 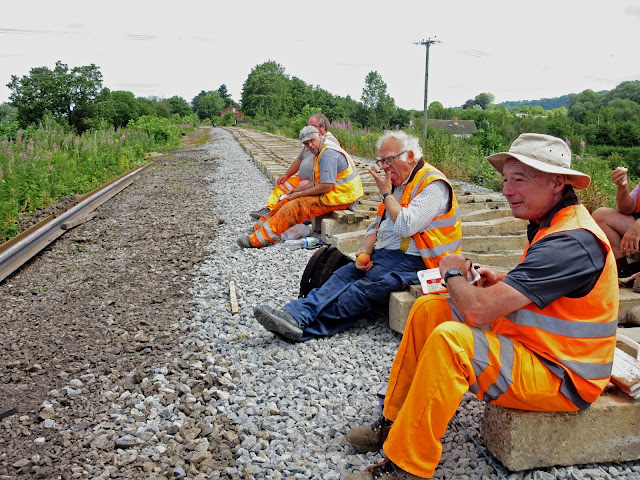 In the middle of the day the sky became a bit murky, so we saved ourselves a long walk into the shade and sat down where we were - on the ends of the sleepers we had just laid. We continue to lay back south, and as you can see the line is getting nice and long already - we laid 100 this morning before lunch. The rail dragged off the wagons last week is roughly laid next to the track, ready for lifting in.

A sad omission today were the cakes, due to holidays. It just wasn't the same. Fingers crossed for next week then. 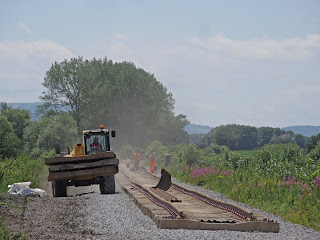 After lunch - more sleepers. Alan now brings 12 every time, which is great.

You can just make out the rail drilling team in the dust cloud. They did well today, achieving 9 sets of fishplates bolted on, which means an impressive 36 holes drilled. No wonder they had a blunt bit.

The welders were also back earlier this week, and a final lot of 40 rails has been ordered for delivery in early July. This will get us over the bridge and into the area of the Broadway goods yard. 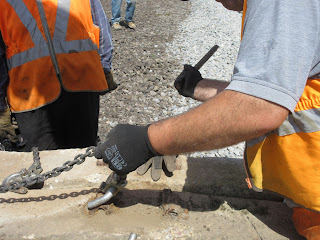 The sleeper layers hook up the sleepers in sets of 4, but sometimes you can't get the clip into the Pandrol hole. The sleeper in this picture had been stored upside down, and the holes were filled with baked mud that was hard as mortar. We didn't really have the right tools up on the trackbed to deal with this, but managed to get a clip in by hitting it with a piece of offcut bar. Whatever works. 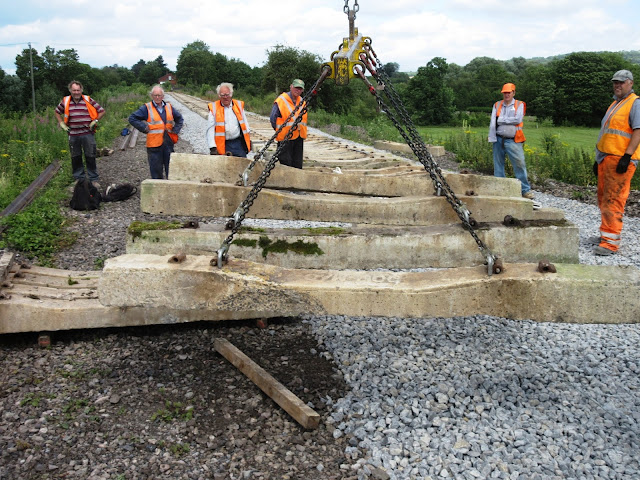 Here goes a typical load. Everyone stands well back, as the sleepers perform a crazy dance as they swing through the air.

Now this load has something special about it, a rogue sleeper. It's a non standard one, what they call an F40 instead of an F27. The sleeper sorters at Gotherington didn't pick it up, did you? See it? 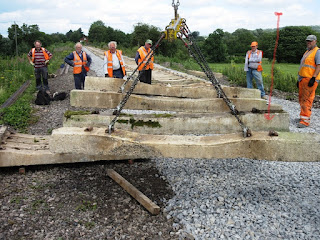 OK, we'll make it easy for you - it's that one. Didn't spot that, did you? And yet the Pandrol holes are clearly bigger. Your eyes sort of glaze over after you've stacked 200 of them. 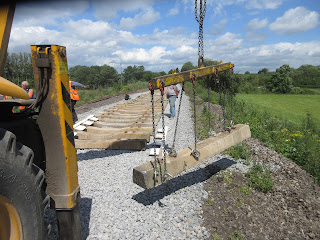 It's annoying for the laying gang though, a reject in the middle of the ones your are putting down. You have to lay all 4, undo the first two (they stay in place), then lift the last two back up and spin them round, then lay the last two again, and finally re-clip the unwanted F40 using clips from two different chain positions (the spreader bar doesn't like lifting odd numbers of sleepers) and lift the offending item into the cess for picking up later. We can use F40s, but only with others of their kind. 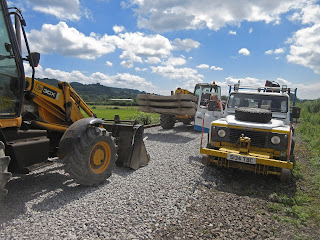 Towards the middle of the afternoon our line of sleepers laid gets seriously long, and we start to run out of space in the area where the line of sleepers will meet the railhead. It's like Piccadilly Circus here with all these vehicles.

Cue the arrival of our estates manager, in his Freelander. Argh! Is there a traffic light in the house? 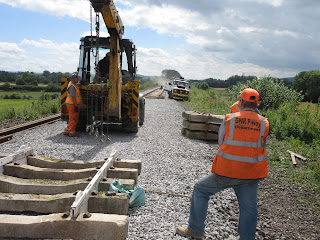 Just look how close we are now!

We're going to almost close the gap, and leave one panel open, so that vehicles can cross from one side to the other.

When we resume laying rail (next week) we will skip over the gap, and start laying rail on to the bit in the foreground, working up to Childswickham and over the bridge. 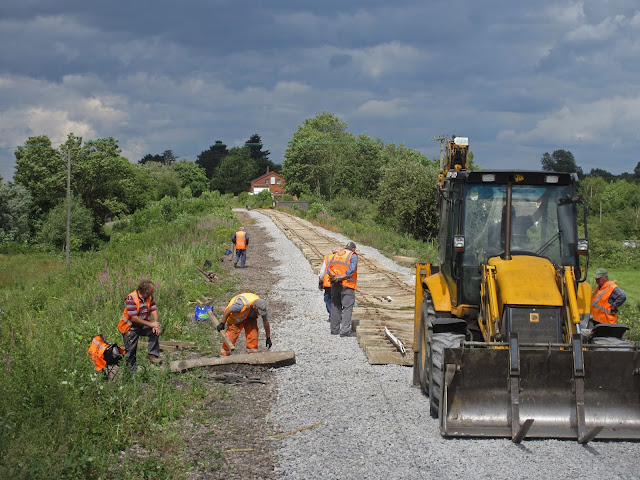 Here is an overview from the back of the Landie, looking towards the Broadway goods shed, and showing most of the sleepers we laid today. Just a few more to go, the Landie is parked by the rail head.
The reject sleeper on the left was dropped there so that we could tie a rope to it, with the other end at the bottom of the embankment where we climb up painfully from the car park. 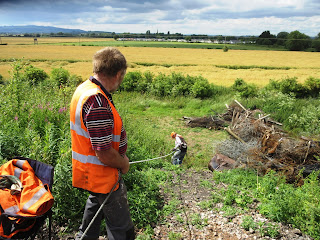 Here's the rope already in use. Jim picks his way down the slope (as you know, he's only got one arm) while Steve at the top holds it up so that Jim can grab it more easily. 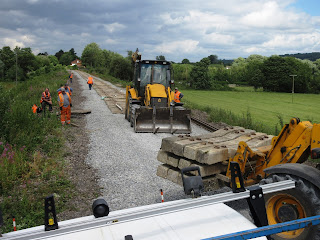 A final load of 12 sleepers arrives, which has to be manoeuvered carefully between the vehicles, the rail head and the ends of the sleepers, and please also in a place where Steve can get at them. 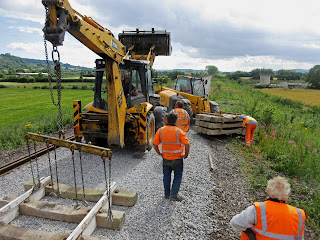 It's a bit tricky setting the load down, as the ground is uneven and Alan has to be able to withdraw the forks without the pile falling over. 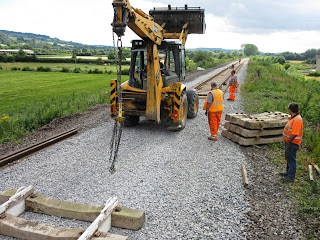 After succesfully retrieving his forks from under the pile, Alan retreats to behind the JCB, and Steve moves forwards to reveal the place where the last 8 sleepers will be dropped. 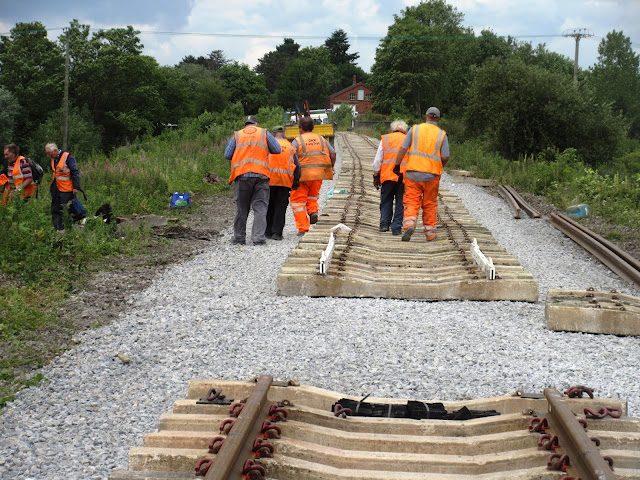 Job done! 225 sleepers laid, the gap between the railhead and the bridge filled, except for one panel. Next time we will lay rail along the stretch where the guys are walking, onwards towards the bridge, leaving an 18m gap for vehicles to cross. Eventually this too will be filled in, and when ballasting, we will drop a bit more here to make a vehicle crossing over the top of the track.

There's also a distant signal due to go in here, we heard.