Part 2 of the canopy goes on

Today we erected the second half of the steelwork on the heritage Broadway station canopy. It all went up very easily, fitted perfectly, no issues to report. Piece of cake, this heritage stuff. Turns out is was cheaper than the contested first design too. 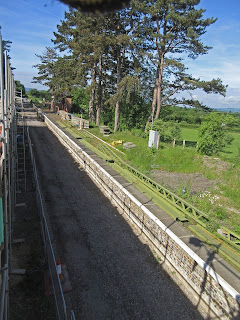 Prior to the big erection day, the team had been down to position the purlins, fascia boards and intermediate rafters around the station building.

Here you can see a row of them placed along platform two, ready for the Vic Haines lorry to lift them in.

There was just a small team of 4 on site, but everything went very well indeed. 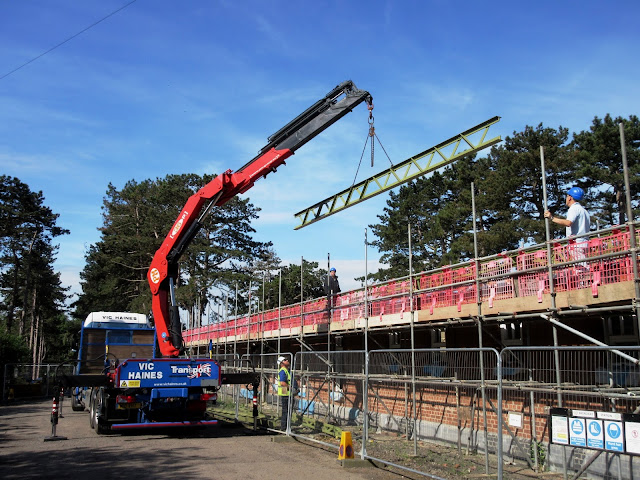 We started on the forecourt side. You can see one of the purlins going up here. 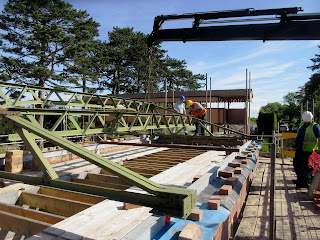 It was accepted at the top, and with a bit of to-ing and fro-ing it was supended between two trusses.

The crane lorry driver is on the right, and he controls the lift from a box around his waist. 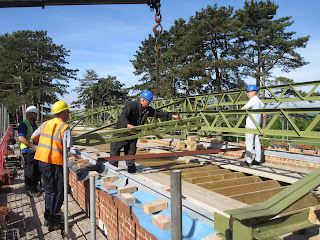 The second item to go up was an intermediate rafter, a short piece that connects the ridge purlin to either the ringbeam (here) or the fascia board (platform side).

It is wriggled through the purlin in the middle. 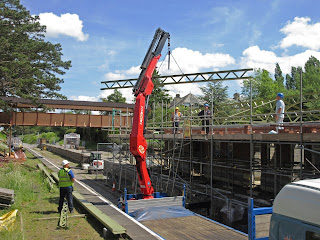 With all the purlins correctly located on the forecourt side, the lorry reversed - with some difficulty, half of the trackbed being blocked - into the platform 2 road between the platforms, and lifted in one of the platform side purlins. 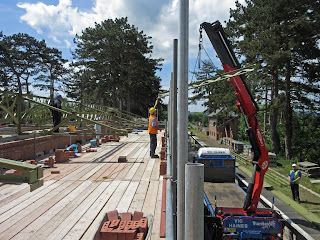 This was followed by another of the intermediate rafters, which was steered through the gaps between the scaffolding poles. 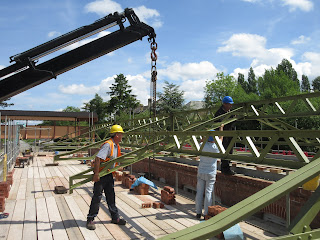 The intermediate rafter was pushed into contact with the ridge through a gap in the purlin. This was quite tricky, but it did fit in the end. The bottom end of it connects to the platform side fascia board, once that has been lifted in. 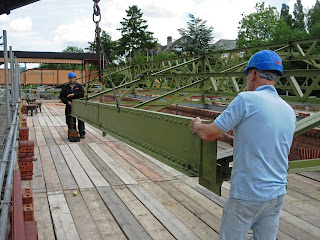 Last of all, a fascia board is lifted in. These are quite heavy.

There is no natural place for them to hang, so they are supported on jacks and secured with G clamps for the time being. 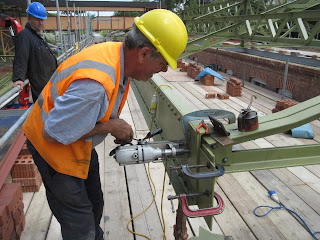 With the fascia board supported and clamped, a mag drill is used to bore a bolt hole through three layers of steel.

The fascia board is then bolted on at each end, and later on we will change these temporary bolts for proper rivets. 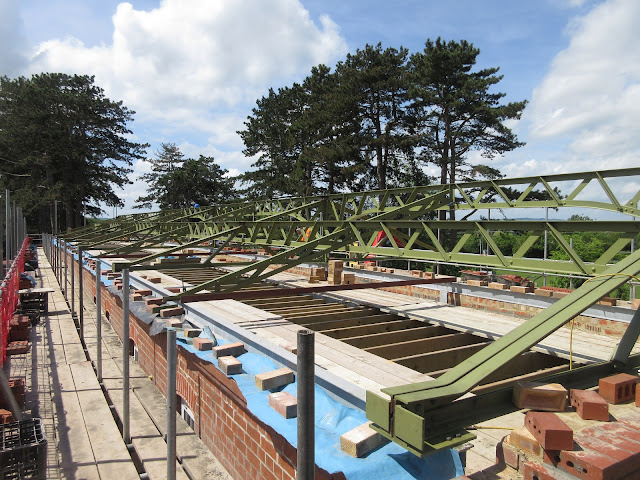 Here's a view of the forecourt side of the canopy, with everything now bolted on. There are no fascia boards on this side. You can start to see how much of the canopy structure is up here now.

On the original building, all this steelwork rested on sandstone blocks on top of several rows of brickwork. In our construction, necessary due to the requirement for insulation, the walls are hollow so the canopy rests on an invisible internal frame. The forecourt side of the frame can be seen here above the blue plastic sheet. 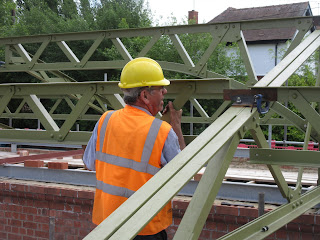 When the purlins go in, they are placed on angled brackets half way up the trusses. There's one already in place on the right, and we're pleased to say they all met at the right place.

Note how the top half of the purlin goes over the truss, and the bottom half under it.


Another purlin and another fascia board go in at the northern end: 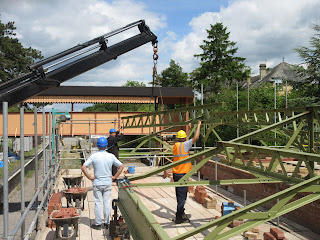 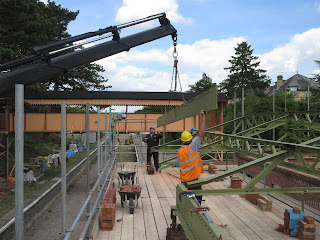 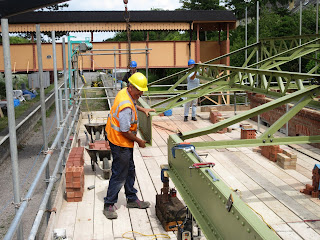 The fascia boads were made up in 3.5m lengths, then joined together in 7m pairs, and these were then lifted up into place. Here you can see one about to  be married to another, again with bolts to start with, to be replaced by more solid rivets in the next stage. This is the last one on the northern end, the assembly job having started in the middle to avoid distortions. 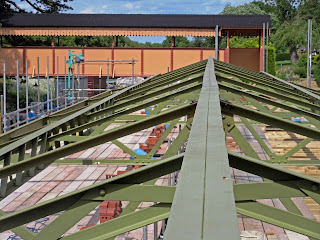 This is a view along the line of ridge purlins, with everything that is in sight fully assembled. Big, isn't it! 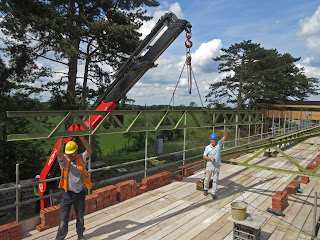 Near the end of the afternoon, the last purlin is walked to its final postion, at the Signal Box corner. 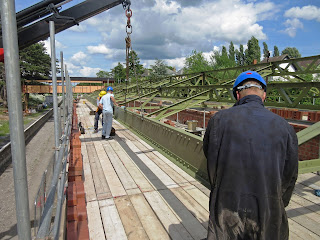 And the last fascia board is secured to the ends of the trusses and intermediate rafters.

It is amazing that everything fit without trouble, and is nice and straight. On the first assembly day we skimmed 1/8th inch off one of the ridges; today we cut nothing off at all, it all just went into place without grumbling.

Today we had the Vic Haines lorry to do the lifting; in 1904 and with the track already in place between the platforms, a rail mounted steam crane would have been used. In 1904, the whole structure would have been test assembled in the E. Finch yard at Chepstow, so that no holes would need drilling on site, just riveting up. 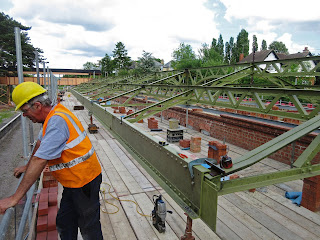 Here is the full length of all the fascia boards together. Outside will be dagger boards and a gutter, inside you will see the steel and two  original works plates.

Our hearty congratulations go to the gang in the loco department who went for the heritage option, designed it, manufactured it, and finally erected it. Well done, lads!

We also thank our shareholders who helped pay for it, but look what quality you got for your money!

With all the assembly work done, a fair number of holes still remain to be drilled ( a bit under 500 in fact, but many have already been done) so here are some pictures of the finished product: 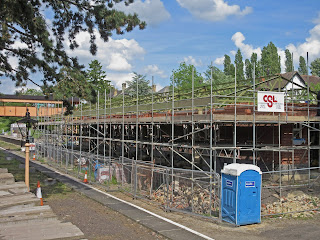 The completed canopy, from the signal box steps.  It's still a bit difficult to make out though, with all the scaffolding in place. Wait until the sheeting is on, and the scaffolding removed, then it will look even better. It should all be done by September. 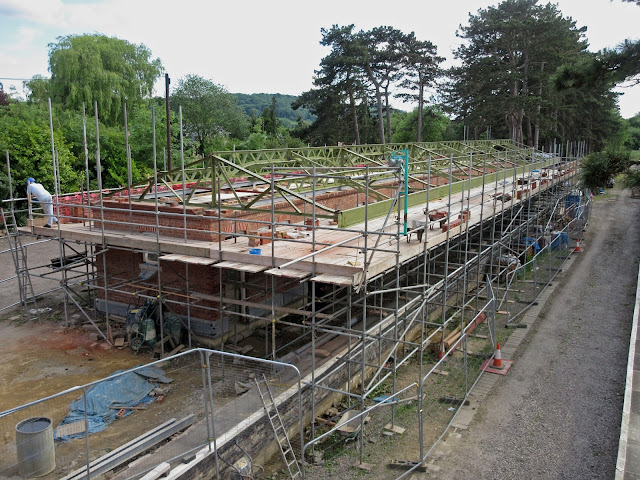 A last view, from above again. Everything is now in place, or at least everything major. Some corner brackets still have to be made, and the canopy overhang at the front here, which should rest on the bottom of the footbridge steps. This allows passengers to cross the line, walk down the steps and out from the platform, all under cover. Toddington didn't have this, but a good example can still be seen at Hall Green.
Impressed? It was worth going the extra mile for a heritage job of which we can feel proud for many years. 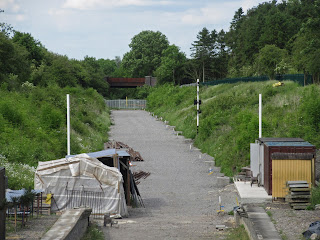 Finally, a quickie looking north, just to show you the freshly ballasted northern section of the track, where there will be double track to see, incorporating two turnouts and two buffer stops at the end. Three signal posts are in place now.