On Monday work continued to remove from the trackbed in the cutting at Winchcombe the remaining spent ballast.

The temperature has risen a bit now and the days are a bit longer too, but the mornings remain grey and dark, and some things are reluctant to start. 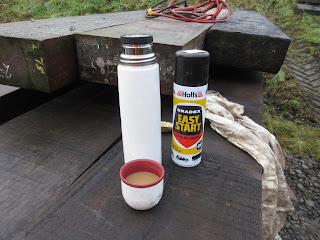 We have developed measures for that!

An 'Easy Start' for both man and machine.


The dumper was most reluctant yesterday, having run out of fuel and supplied without a bleeder valve in the fuel system. We got it going eventually, see also the jump leads in the background. 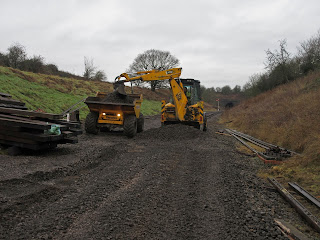 Once both machines were up and running - and the operators pepped up with caffeine - we dug out the remaining trackbed between the newly attached crossing, and the end of the plain line relaid from the tunnel. 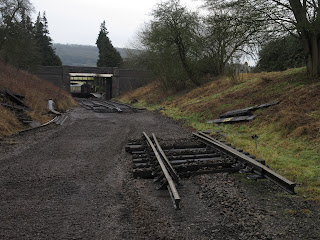 The area cleared can be seen on the left, with the double platform track and crossing behind, and the switch 'parked' in the foreground.

The switch now needs to be moved left a bit, and up to the crossing. The whole area is now clear to put the remaining rail in, and Wednesday will see a continuation of that, together with a visit from the welders to weld up every other gap. 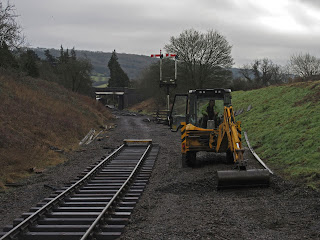 Having cleared the trackbed for relaying, we moved on to the down line leading up to the tunnel. This still has the spent ballast excavated from the bed of the up line on the left, which was relaid earlier this month. 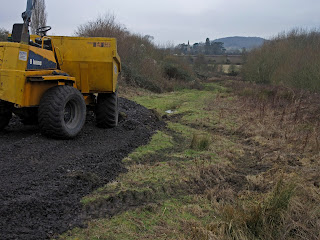 The spent ballast from the down line was also taken up to the new access road being built to Working Lane.

This area is very boggy indeed; the deep gouges in the forground witness where Steve nearly got the JCB stuck.

Working Lane is still some distance away (on the other side of the patch of green in the distance). The spent ballast won't stretch as far as that, but we will have made a good start, and we're saving the railway money. 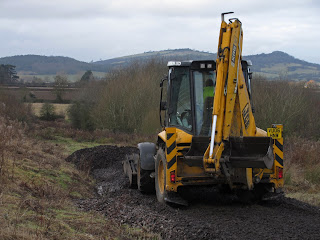 Eleven trips - 99 tons of ballast, can we say 100? - were taken up there yesterday. Half way through the day Steve came up to spread out the piles tipped by the dumper. 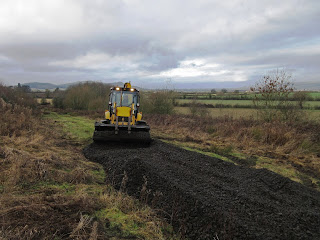 Dark clouds are building up over the hills in the background, a portent of yet more rain which came during the night.

A drain parallel with the trackbed on the left has been moved to the other, right hand side of the track, but the area of the former drain is very spongy now, and swallows up what we dump on it. It needs plenty of infill to make a good surface. 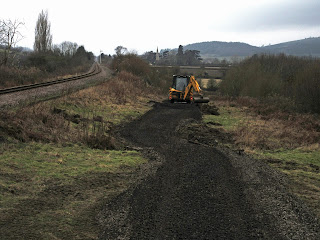 Here you can see the progress with the track, as it zig-zags over a new culvert which takes the drain to the other side of the track.

The roadway in the foreground, tipped a few days ago, is already much more stable and is expected to become quite hard in due course.

The pine trees and church spire in the distance stand in Gretton village, which is crossed by the railway on a long, tall embankment.


The total distance from the worksite at Winchcombe to the tipping area by the track is about a mile, a 20 minute round trip. This is why we opted for the biggest dumper possible. While it is on its journey, Steve takes the opportunity to scrape the trackbed level and prepare piles of ballast, which can then easily be scooped into the dumper. 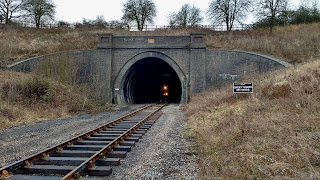 On one of its 34 shuttles so far, the dumper comes to the end of its trip through the tunnel. The visibility inside is quite good, thanks to the battery of lights on the front.

The dumper emerges from the tunnel towards the end of the day. We are about half way up the down line to be excavated here, and think that another day, or day-and-a-half, should see this job ticked off the list.

Relay work and welding will continue on Wednesday.