- A small crew went to Laverton to tamp out some uneven parts, using the Jacker-Packer and sighting boards (with some success)
- A second crew loaded the two flat wagons in the yard with point timbers, more new sleepers, and 8 rails (which will allow the double track to be extended as the point is moved further south).
- A third crew took the Permaquip trolley ino the cutting, in order to part dismantle the turnout and lay more sleepers.

First, Laverton. A spy (known to some of our wartime re-enactors as a German one) observed the Jacker-Packer and sent 3 secret photographs: 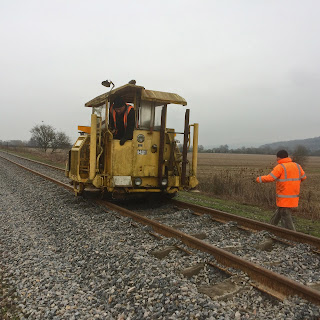 The Jacker-Packer at work, with evidence of lifts in the foreground. Martin is our 'driver' of this strange little vehicle. 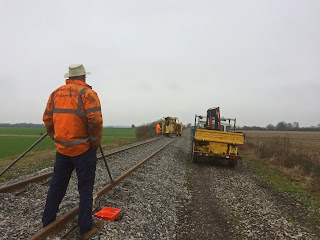 Much patience is required, watching the Jacker-Packer.

We can handle that. 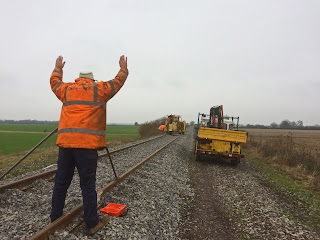 The skill is knowing when to spring into action - Now !

Andy has brought up the Landie with the sighting equipment, and is here directing Martin on the lifts to make.

Later, the tamper will pass here and give the levels a final adjustment. Using the Jacker Packer saves the tamper a lot of time, as it can only do small lifts. 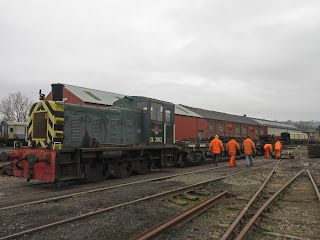 In the yard at Winchcombe, the second crew walks up to load the wagons with materials for the relay, while the third has extracted the necessary tools from the various vans to go and part dismantle the turnout. The yard shunter is ready to push the short train up to the bracket signal in the cutting. 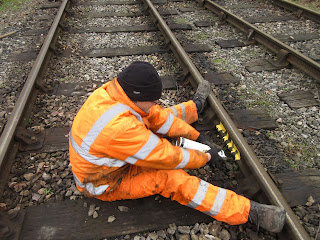 Instructions were to carefully label the rails removed from the turnout, so that we would know more easily from whence they had come.

This simple task proved more difficult than it sounds, as the spray can (for marking the ground) did not like being used horizontaly.

Eventually we did this with the rail, once removed, lying on its side. Another lesson learned. 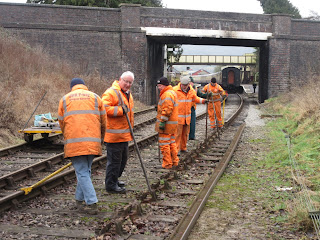 The first rail was unclipped, and turned out of its chairs fairly easily.

Hats off to the gang !

But pride comes before a fall... 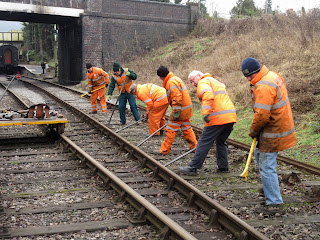 The gang then set about unseating the partner rail on the other side. 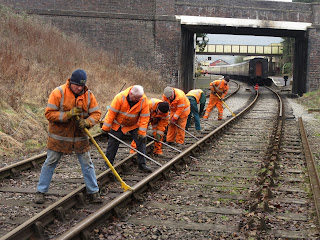 After some headscratching it dawned on us that of course there is only one way you can unseat a rail, and it wasn't the one in the previous picture.

After attacking the same rail from the other side, it rolled out easily enough.

In the background is the break between the job this year, and the relay done last winter (change of colour in the ballast) 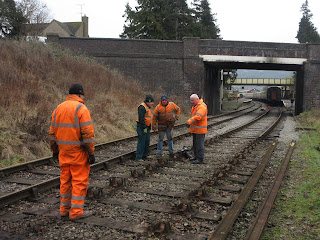 With both rails crowbarred to the side, Rick set about removing the screws from the chairs. John M and Robert gave him some 'helpful' advice. 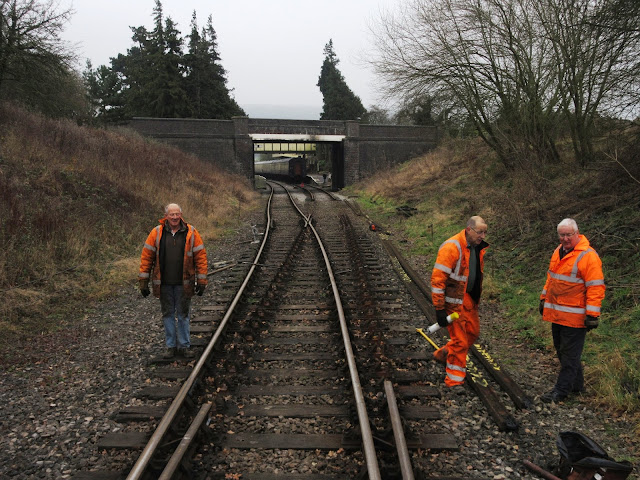 Late morning we had completed the job. The purpose was to remove those rails from the turnout that led to platform 1.
On reviewing the scene when all the rails had been thrown out, there was a sweaty moment, just in case we had removed the wrong ones (the line through platform 2 still being in use for delivery of materials). But we hadn't, phew! All was well. The chairs on the timbers were left in place. 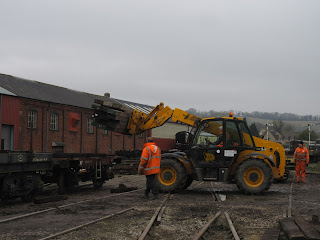 We returned to the yard to 'help' (...watch) the gang load up the flats with sleepers, timbers and rails. The completion of the loading coincided with lunchtime, brilliant!

Back in the mess coach, the atmosphere was steaming, and climbing up th ladder there was a sudden, mouthwatering aroma. 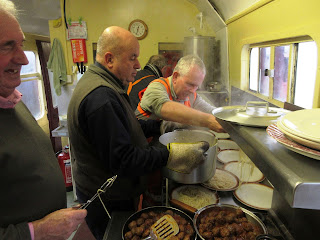 The kitchen was humming with activity. Today was an Italian day, and we found Martin and Paul wrestling with a huge pot of spaghetti, which was being heaped onto some 20 plates or so. 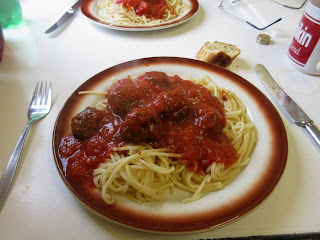 The result at your table: Meatballs in tomato sauce, on a bed of spaghetti, with a side order of hot garlic bread! A veritable gourmet lunch at Winchcombe, who knew? 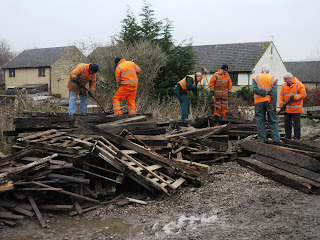 The price for this largesse was heavy labour after lunch.

Here the dismantling gang is seen on top of a pile of rotten sleepers, trying to prise off some throughbolt chairs. As the nuts used for these are invariably seized after time, the only way to get the chairs off is to hack the rotten wood to pieces. 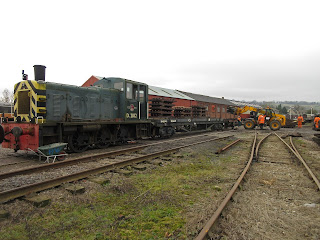 Peter on the Telehandler continued to load new sleepers, with chairs already fitted, and after lunch, finally, the train was moved off and up the line to the short stub of track left in situ at the bracket signal. 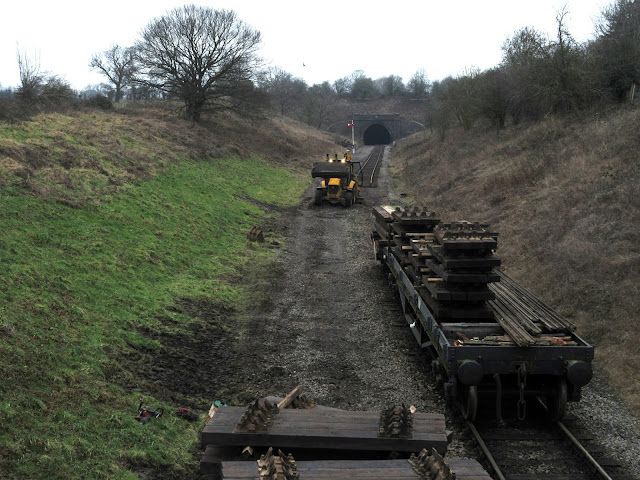 Here is the loaded train pushed up to the end of the stub. In the background, Steve can be seen levelling the trackbed cleared of sleepers by the Saturday gang, and behind that is the replacement track laid so far. We are on schedule. 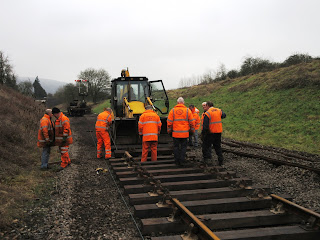 Before the light began to fail, we managed to get in about a dozen of the new sleepers, not quite enough to lay in a new pair of rails. That's something for the Saturday gang, who will also be unloading the supply train. We hope to start digging out the spent ballast around the turnout next week.
Posted by Jo at 18:54