It was a crisp, clear day today, as a dozen volunteers gathered in the mess coach to warm themselves up in the moist fug of the heating. Water dripped off the ceiling, glasses were steamed up. But the tea was hot, and spirits were high.

They day started with minus 5.5C, and 'warmed up' to 0 degrees as we went home - you happy now? 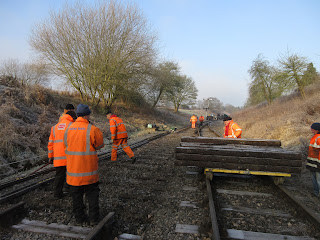 To kick off, and get us all warmed up, we set out to lift the chaired sleepers out of the panel dismantled by the Wednesday gang.

Simple. Ah, but the ground was frozen solid, so an initial team had to crowbar every sleeper out of its bed first, so that a second team could lift it on to the trolley. 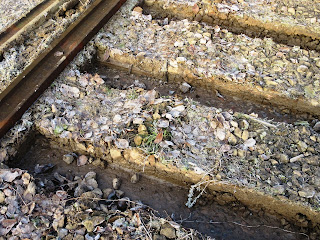 The beds where the sleepers were look like this. Frozen mud underneath. This should not be there, it should be a clean bed of ballast.

This state of affairs is one of the reasons for the relay here.

How did it come about? 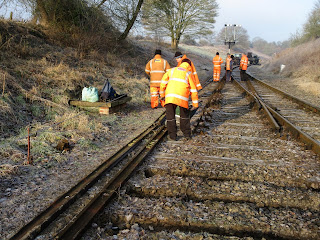 The guilty culprit is the catch pit on the left. At some time in the past (before Andy P sorted out our drains) in overflowed, spilling mud over the cess and on to the track.

This ruined the drainage here, and the area will be dug out and re-equipped with fresh ballast as part of our relay.

Even now you can hear a considerable volume of water in the depths of this catch pit, but it flows cleanly now. 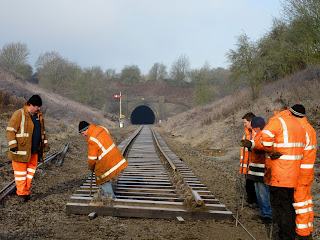 The next job was to carry on track laying, and use up all the prepared new sleepers on the flats. They need to be vacated, in readyness for loading with those that have been dug out. 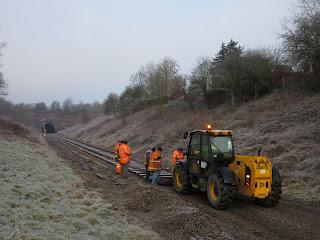 Steve brought in a steady stream of new sleepers with the Telehandler, which were quickly laid in just the right spot. 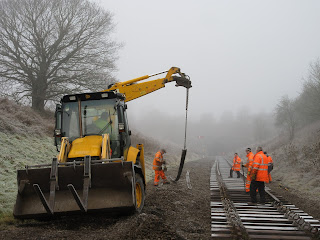 Once a panel length was down on the ground, rails were laid in.

Notice the difference in weather by the tunnel mouth, compared to the previous picture? The feeble sun vanished, and a cold fog settled into the cutting. 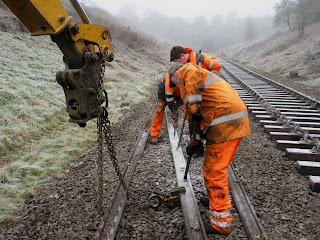 Lifting the rail up in the previous picture frees it from the ground and the dirt, so that the Camlock can be attached.

Today, the rail was filled with ice, which had to be broken free and hammered out with bars. 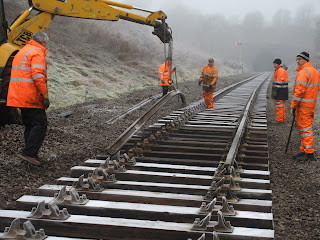 Finally, the reward for the effort is the lift of the rail into its place. We did 3 panels like this today. More was not possible, because part of the gang was also occupied at the northern end stripping out the next panel, and Steve can only do one job at a time. Yes, even Steve. 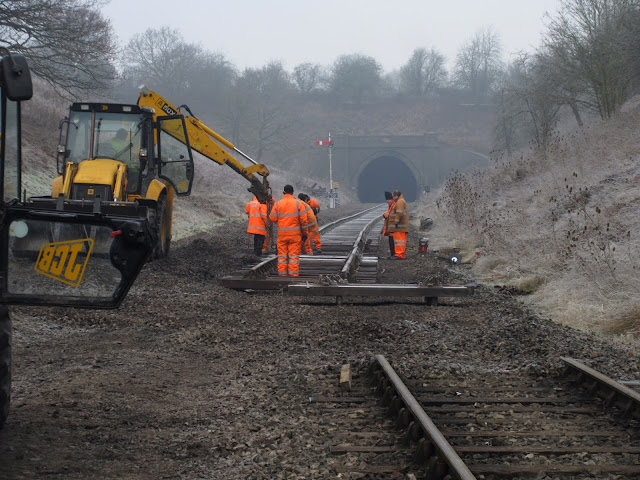 Taking a few steps back, the current extent of relaid track can be seen, and how the track no longer follows the curve of the previous (lower right), but starts to drift off to the left. This will enable the turnout to be moved nearer the tunnel, and provide longer platform roads. 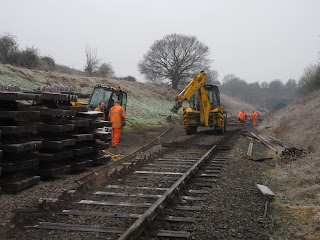 The second team set about dismantling track panels north, being those previously occupied by the supply train.

The new sleepers it had delivered are stacked on the left, and will go into the space in the foreground. 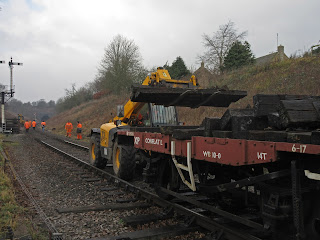 With two panels cleared of rails, the Telehandler was able to scoop up the life expired sleepers and drop them on to the flats. 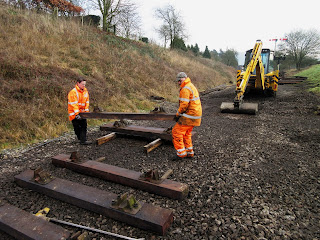 While Steve started to extend the level ballast bed, ready for further sleepers to be dropped, a few odd sleepers are laid on the end by hand.

Although there is some mechanisation with the JCB and Telehandler, quite often the heavy work nonetheless falls on the same old shoulders. You just can't get away from it. 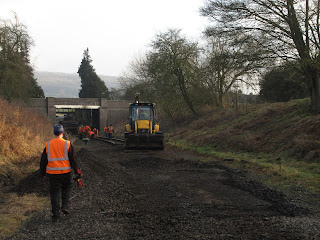 After a while, Steve moved on to the area where the turnout will be situated from now on, and levelled the ballast to which it will be dragged. In the meantime, others in the background start to remove parts of the tunout, to make it lighter for transport. 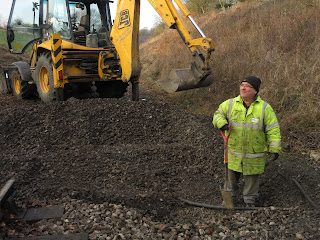 Chirpy as always, Steve is not afraid to get out of his cab to 'dig the dirt' himself, in this case to locate a signal cable, and finally bury it out of harm's way. 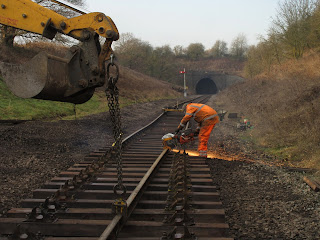 On the section resleepered earlier in the day, a new rail is brought in and has its end cut off, in preparation for welding. Every other joint is a weld.

'Bert Ferrule' tries not to set his trousers alight, they seem to lead a charmed existence. 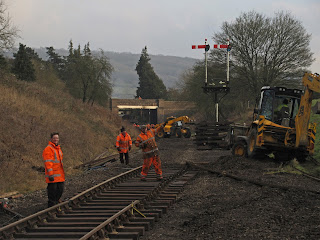 With the freshly cut rail in its place, 'Bert' gives us a high five. Yesssssss !

Removal of timbers from the turnout has started in the background. 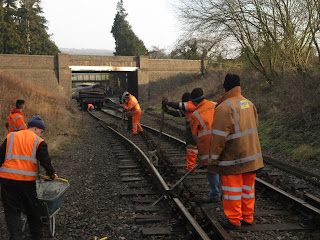 The two flats are now loaded and out of the way by the platform, and immediately the first rail is tipped out of the turnout. 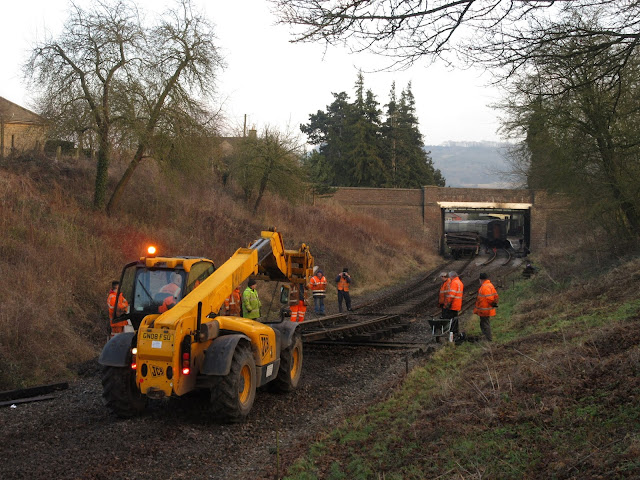 Light is starting to fail now, but we have achieved our objective - preparation of the ground, ready for spent ballast removal next week.
The turnout is split into two halves, and here Alan in the Telehandler is hooked up to the southern end and is slowly pulling it out of its seat. 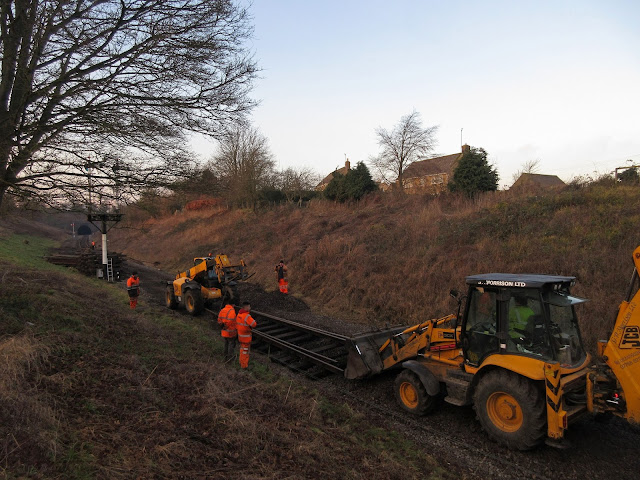 In this, he is then assisted by Steve in the JCB, who lifts the northern end of the panel with the forks, so that the end does not drag on the ground and take spent ballast with it. The new location is for the 'toe' of the turnout to be just this side of the bracket signal. 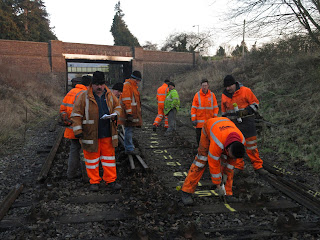 As we tidy up the tools, Nigel and Hayden mark up the timbers according to the plan, for future reference, re-use or replacement. 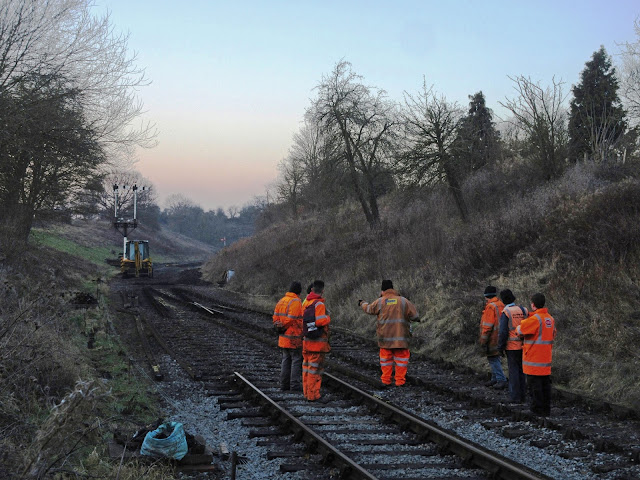 This end of the day shot shows the great progress made today, despite the cold. Only the 'frog' (centre) of the turnout still needs to be moved, then the area between the new track laid (just visible in the background) and the track in the fresh ballast, relaid last winter, can be dug out. It will be dumpered out next week through the tunnel, to make up a new access road at the other end.

At the end of the day, we had removed 4 panels, laid three new ones, and removed almost all of the turnout.

News on the ballast regulator is that the new brushes have arrived and a few have been trial fitted. We should be able to put the others on sometime next week.