Two pople were in the cutting at Winchcombe today, to make a start on digging out the spoilt ballast from the area of the relaid double track, and relocated turnout. We were armed with a JCB, and a 9T dumper. 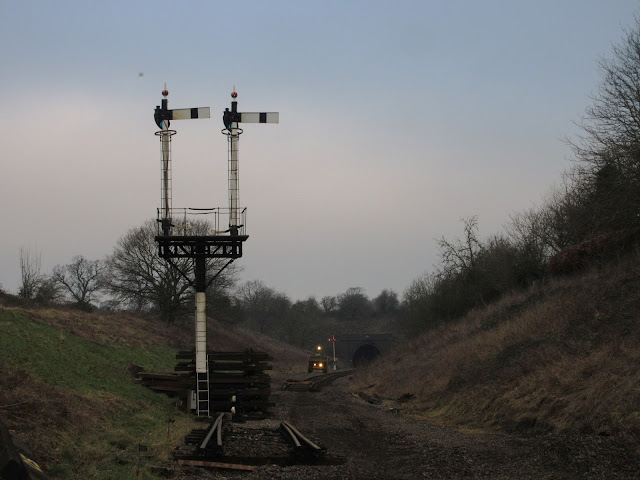 The intention with the ballast is to kill two birds with one stone. Make ready the bed for the turnout, and use the spent ballast at the Gretton end of the tunnel to make an approach road to the formation from Working Lane.
We hired in the largest dumper we could get, and asked for one with lights, so that we could take it through the tunnel. In the picture above, you can see it emerging from the tunnel. In the foreground is half of the turnout, in its approximate new position lengthways, but not yet widthways. It needs to move right a few feet to avoid a clash with the bracket signal, but at the moment access is needed so it has been placed to one side. 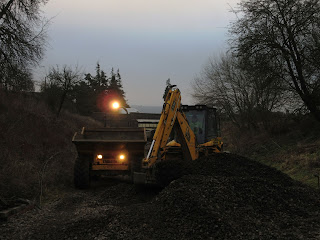 This picture gives you an idea of the conditions today - an early start in the gloom, and a maximum temperature of : 0 degrees C! This was reached quite early on, and did not change throughout the day. Cold then. On top of that it was windy, so a windchill factor entered into the equation. No worries though for Steve, in his nice warm cab. 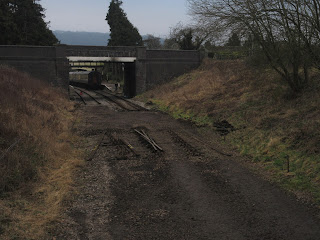 A quick view towards the station, and it shows the crossing still in its place. It needs shifting to join up with the first half of the turnout, and the idea was to clean the trackbed, so that the crossing can be shifted on Friday. 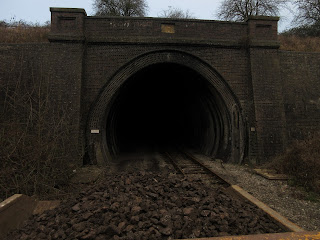 And we were off! A first load of 9 tons of spent ballast makes its way towards the tunnel mouth. What would happen inside? Steve reported no particular obstacles, but would it be possible to keep away from both the sleeper ends and the opposite side for the whole 693 yards?

Actually, the 'dumper with lights please' option turned into a bit of a farce yesterday. After it was unloaded the lights (which it duly had) were tried out - you never know -  and they didn't work! A technician was called, who advised that there was no wiring for the lights. Well of course, we didn't specify wiring, did we? We asked for lights!
The technician not only wired up the headlamps, he added a great spotlight on top of the rollbar, which was beautifully aimed to hit the tunnel wall just in the right place. Perfect. 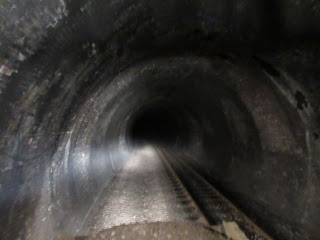 Inside it was a bit spooky (rumours of ghosts of the 3 platelayer killed in the accident here) and of course you can't see the other end, as two thirds of the tunnel lies in a curve.

The atmosphere inside was brown, and for a while there was a concern about what sort of gas that might be, but the brown colour turned out to be dust generated by the dumper's own passage, and lit by the spotlight above. As the wind came from behind, the dustcloud was driven ahead of the dumper so that you were always in it. 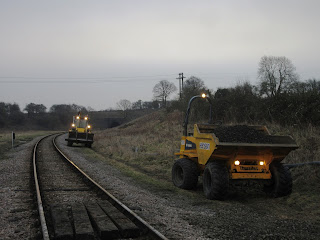 For the first trip we both went to Gretton, so that Steve could explain what the general intention was. He also built a temporary crossing across the tracks (foreground) which turned out to be the same width as the wheels of the dumper. It's quite a large, squat machine, weighing in at 4.6 tons itself, plus the load. 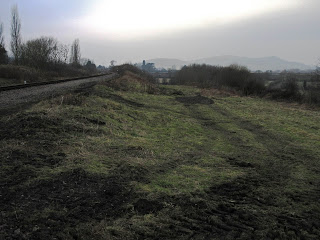 The wheelmarks show the hardened track that we were going to build. As the railway embankment gradually rises out of the ground, it crosses Working Lane below, at the end of the wheelmarks in the far distance. 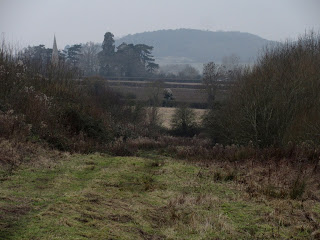 This zoom shot shows the future track descending down to Working Lane, which is named after the Navvy camp that used to be here during the construction of Greet tunnel. It's very damp and boggy here, hence the ballast excercise to make a useable surface for future access. The spent ballast is free of course, a price that we like. 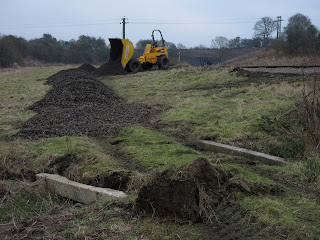 The passages through the tunnel went well, and soon became routine.

Here is a shot of a ballast dump, with a row of previous dumps showing the line of the future track.

In the foreground is a bridge over a culvert. 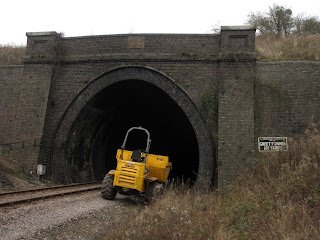 This is the southern end of the tunnel, and the GWSR board showing the name and its length.

Sadly the date stone at this end is also missing. Its place has been filled by a layer of bricks. 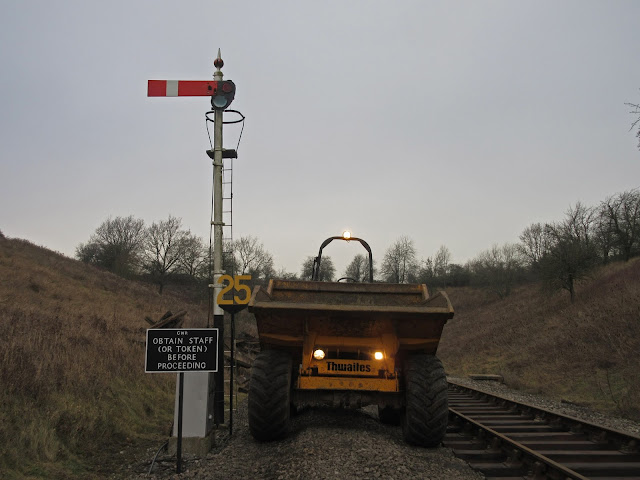 The round trip to Gretton, including loading, takes 20 minutes, so only 3 trips an hour were possible in theory, less time for breaks, lunch, chats with visitors etc. All in all we did 16 trips, so shifting 144 tons of spent ballast.
On the way numerous obstacles have to be negotiated, time and time again. One of these is this signal post. Check out the space between the wheel and the sleeper ends, and between the bucket and the signage.
From the halo on the lights you can see that the gloom persisted pretty much all day long, and the return journey through the tunnel, against the strong draught through it, was bitterly cold. 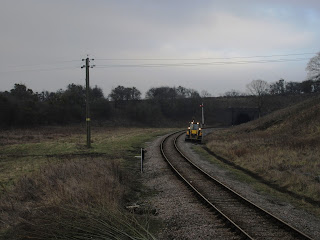 After lunch, and with 14 trips made, Steve came up to see how things were going at the other end, and to level out the piles into some sort of formation.

The area on the left here is believed to be the site of the Navvy camp, a huge space dug out of the hillside (but no doubt also a convenient source of material to complete the embankments south of here). 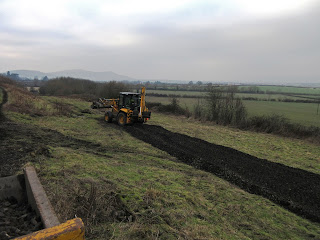 This picture shows the track under construction, with Steve levelling the piles.

The area further south of here is too boggy to cross, even for a 4 wheel drive dumper, so we will need to tip forwards off the new track from here onwards. 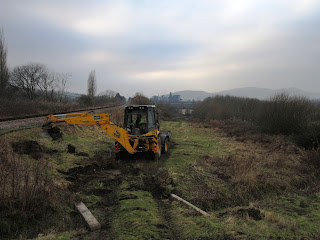 At the end of the day, we had reached this little culvert with new bridge.

Steve is just removing some of the worst marsh and vegetation, so that the ballast can be dropped tomorrow onto firmer ground. 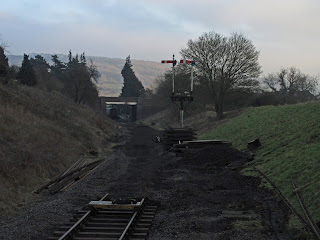 The light then failed at around 16.30 - the days are definitly geting longer now - and this parting shot shows a clean ballast bed from the end of the rails, station side, up to a point south of the bracket signal.

We were well pleased with this result. It means that tomorrow we can do some additional scraping in the foreground area, and in the afternoon we will move the crossing two panels south, to join its other half. On Saturday we might then have the opportunity of putting more of the track back again.