A healthy gang of 16 assembled today, and split into 4 teams.

Team 1 went to Bishop's Cleeve to relay the track across the culvert with the roof repair. 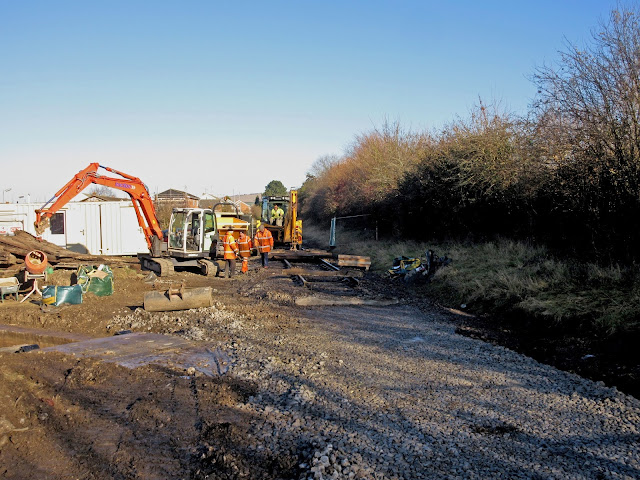 The new roof for the culvert is now sufficiently in place that the track can go back in. A quick half day job, we thought, then we can return to Winchcombe cutting and continue with the track removal. But it was not to be. It's amazing how things get complicated by small hiccoughs.

In the above picture you can see the state of play at Cleeve.The culvert has been partly re-roofed (more to come) and there is enough ballast reinstated for us to put the track back in. 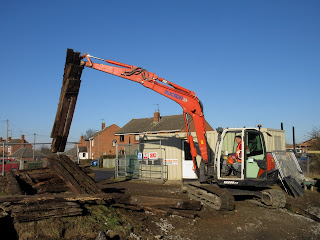 Once we got Steve through the obstacle course, he tried to bring in the concrete sleepers stored further down the track, but had to pass the excavator used by the contractor to load the rotten timbers previously used to cover the culvert.

It was a delicate ballet between JCB and excavator; Steve got through between loads, successfully! 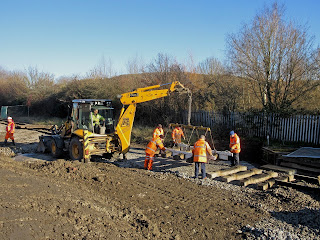 The bed of ballast put down by the contractor had to be thin, as there is little space between the roof of the tunnel and the bottom of the sleepers. The culvert is very shallow.

Nonetheless it was a bit high in places, and needed shovelling. We solved this by going back to Winchcombe for lunch. When we got back Steve had sorted the levels out for us, bless him. 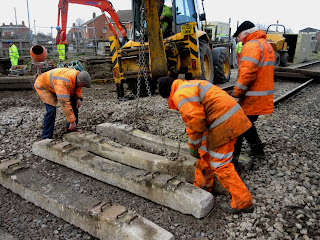 After all 25 sleepers were put back, using the white spacers from the extension, we seemed to be one short. Was there was a gap caused by the different sleeper spacings between 1999 and 2017?

As luck would have it, the end of the old tunnel roof of wood was marked by a good, useable sleeper in concrete. This one we duly put in to close the gap. 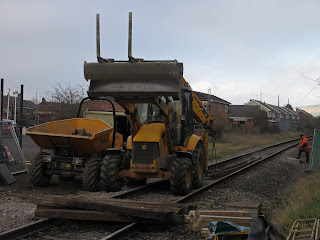 Steve then went to fetch the two rails cut out of the CWR, and dragged them next to the section to be relaid. 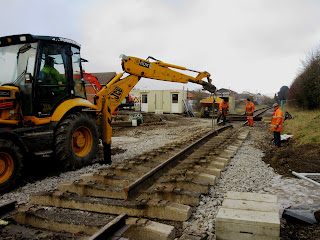 Another snag made an appearance at this point. The Landie that brought up the tools had been commandeered to another job, and took some of the tools away with it, including the Camlock.

Using a simple chain, Stev expertly rotated the rail one quarter turn so that it was the right way up, and gently placed it in the sleeper beds. There was little to do for the volunteers here, just two sleepers to nudge a little to get the beds in line. 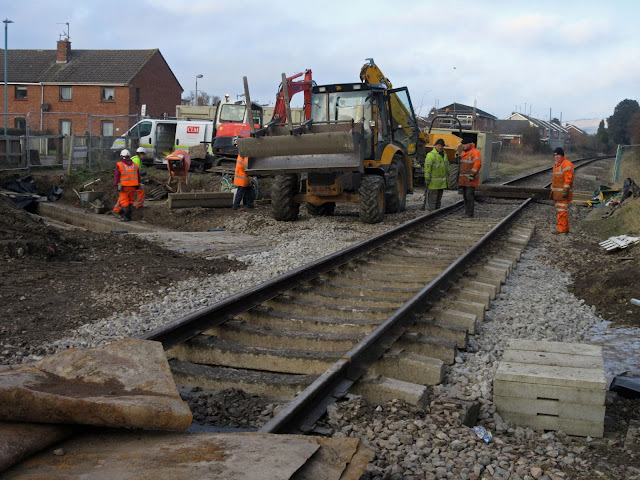 Then, finally, both rails were back in again. Job done! Now it's up to the welders to join the bits together, and stress them. After that the rails can be clipped, and then ballasted. 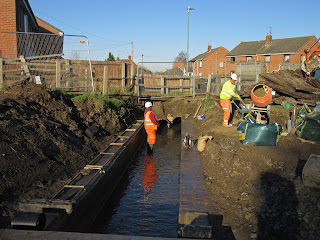 While we were putting the track back in, work on the culvert continued.

The mixer is being used to make a weak mix which is going into sandbags, which are being placed around the two pipes at the end.

On the left is a low course of shuttering, which forms the base for the new concrete roof slabs. 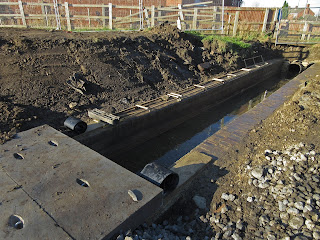 In the area of the track, the slabs have already been placed. They look very strong. The rest of the culvert still has to be done.

This area used to be the entrance to the goods yard, and has been heavily altered from its pre 1976 appearance. A housing estate has been put up on the other side of the fence.


The end of the culvert, which is slow running except at times of heavy rain, has been covered over downstream for a length of several dozen yards in order to give parking access to two houses built on the left. Instead of continuing the shape of the culvert under the railway line, two smaller diameter concrete pipes were used. 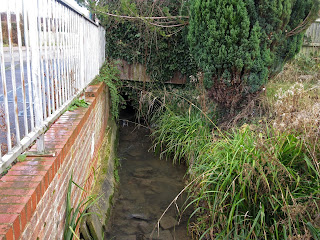 These pipes emerge say 50 yards further along, where the brook becomes open again. 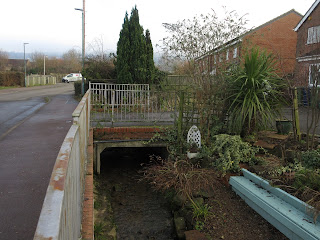 There are a number of small over bridges, and these, like this one, do repect the original square culvert profile. 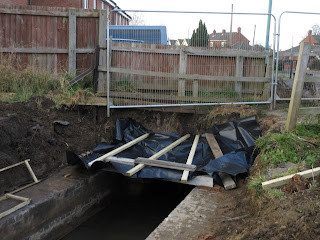 The railway side entrance to the pair of pipes is a potential choke point, particularly if floating debris gets trapped there. This area was previously underground, and from now on there will be an inspection cover on the top of a brick chamber. The beams supporting the bottom walls of the chamber were placed today, and covered against the frost that is expected. This looks like a very sensible idea.

After loading up the tools again, this time into the company truck. It was also able to take a number of useful steel plates that were on the old roof, under the track.

In the end, the Cleeve job took all day, but we did achieve the relay so felt happy about it. On returning to Winchcombe, it was too late to help the tunnel approach relay team.
So what were the others up to?

Team 2 took the Jacker/Packer out to Laverton again.

Team 3 unloaded the timbers removed from the tunnel approach, and loaded on to the wagons on Saturday. This took almost all day, as they were stacked from the end (the limited space by the bracket signal last week dictated this). The good news here is that they are all off, and the wagons are clear gain.

Team 4 spent most of the day in the cutting by the bracket signal. They clipped up the last panel laid on Saturday, and unclipped another at the platform end. This leaves us clear to move the crossing, and start removing ballast on Thursday.


Further to the observations about the ballast contaminated by clay on Saturday, Andy P of the drainage gang sent this little set of pictures to explain how the clay got on to the track. 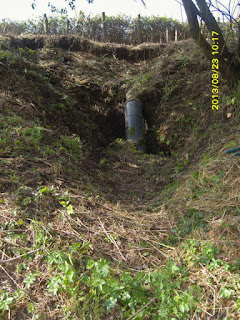 The drain down from the top was originally broken, and was repaired in 2013.

A lot of water drains off the field at the top of the cutting, and should normally be channelled into the catch pit at the bottom with a water tight pipe down the slope.

This is what it looked like before the drainage gang started work. 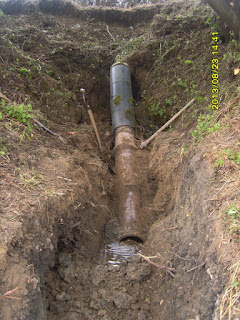 Once excavated by the drainage gang, it appeared that a repair had been made some time ago in the past, with a mish-mash of what was available to hand. The sections were held together by wire straps. There were a number of large gaps so that the water did not in fact cascade down the pipe, but leaked underneath it, scouring the cutting side and washing it into the formation. 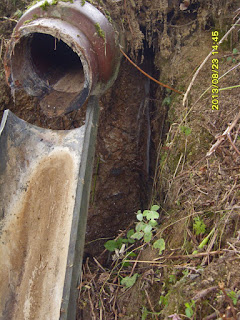 This picture shows a typical area where two lengths of pipe, of different materials, did not meet in a watertight fashion, and the rainwater ran underneath. 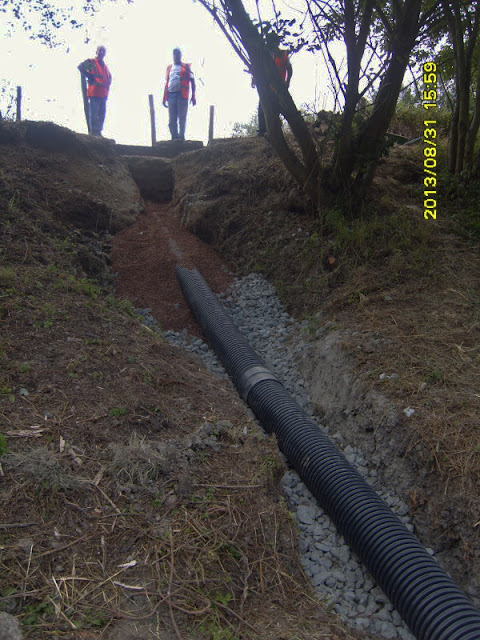 Here is the reinstatement of the pipe, executed by the drainage gang. It's a proper job, all new, no leaks, and the water can be heard pouring down it.

Now we just need to dig out the contaminated ballast at the bottom, a job for the remaining two days of this week.
Posted by Jo at 18:54