Yes, it's a month late. But Christmas dinner for the Saturday gang was cooked today by Paul and Jim, and it attracted a larger than usual crowd. And so it should, it was a gastronomic tour de force!

Yesterday, a small team of two (briefly assisted by a third) moved the crossing that was still in place, and so liberated the spent ballast under it, so that it could be taken away and the site completely cleared. 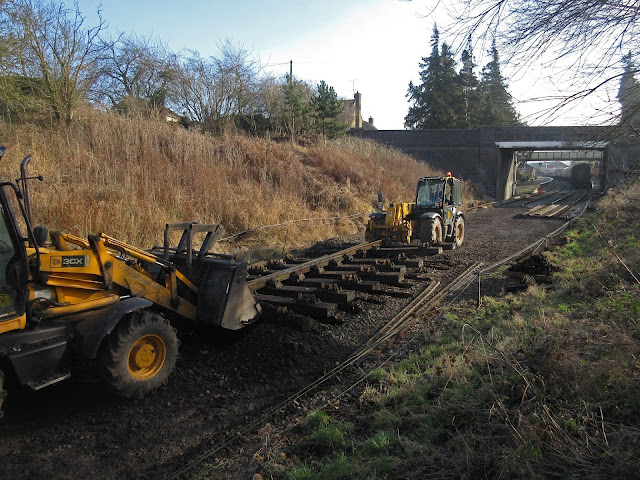 The crossing was lifted up on the forks of the JCB and the Telehandler, and inched further up the trackbed, and to one side (to allow passing site vehicles) 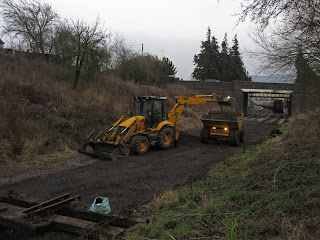 Underneath the crossing was the spent ballast, which was then scraped off and carried away to the new access road being made at the Gretton end of the tunnel.

We did 7 such trips yesterday, say 63 tons worth.
The trackbed north of the bracket signal is now clear and ready for relaying the extended double track, and the repositioned turnout.

More ballast removal is required south of the bracket signal, and this will be addressed on Monday. 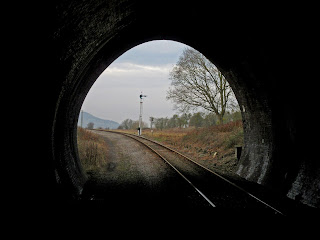 Coming out of the gloom of the tunnel at the Gretton end, this is what you can see.

To the right of the tall signal post is the flat area which was once the site of the navvy village.

There's a bit of water seepage at this end; the rest of the tunnel is pretty dry. 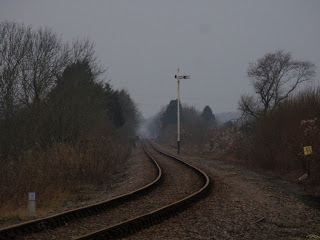 Beyond the tunnel the line straightens out into a long, long straight.

How disheartening it must have been for the pioneer GWSR track layers at the start of this, faced with an empty trackbed, and so much to lay, with the next curve never seeming to get any nearer. 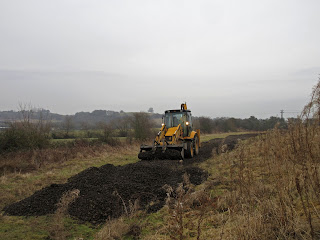 At Gretton, the new roadway is slowly getting longer. There's a long way to go still, there is probably not enough spent ballast to do it all but we will make a good start.

From time to time Steve comes up in the JCB to level out the dumped piles, an make the roadway wider and flatter.


That was Friday then. Today, Saturday, the regular gang arrived at the cutting in Winchcombe, the tools loaded on to a trolley, to find the site up to the bracket signal cleared and ready to go. 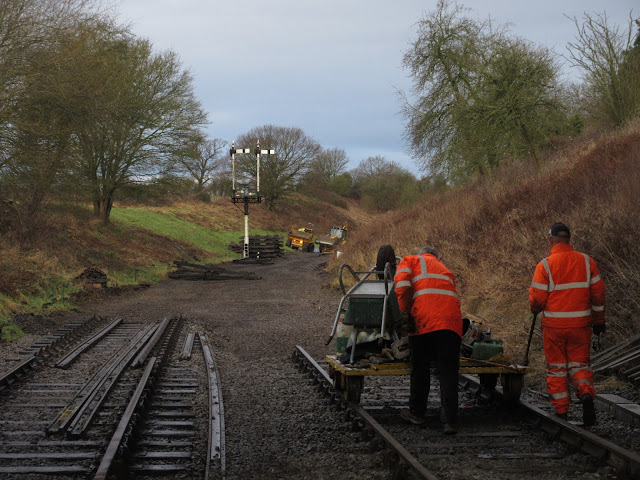 The crossing has been pushed further up and to the left; the switch is up under the signal at the back. Our plan today was to fill this area with track. 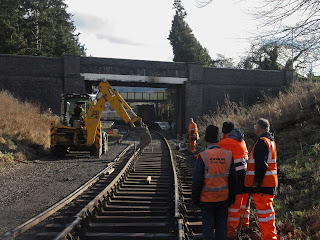 In total we put in 5 panels of track today, and laid two longer rails in at the start, so this basically gives you the extra length of the loop now.

The logistics of the relay need some careful thinking and preparation. We first laid the down line, and in this picture you can see Steve giving it a 'tweak' to get the curve right.

Rails for the up line have also been laid in position, in anticipation of the new sleepers going in here. 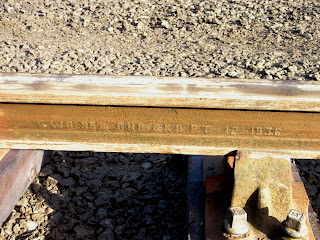 We are re-using the rails that were here before (with some rearrangements) and we will therefore have bullhead track on cast iron chairs. It was amusing to see that the rail itself is marked GWR 95 1/4 and 12-1936, being the weight and date of manufacture. Still original stuff. 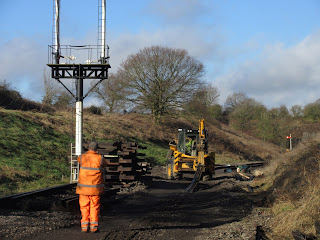 Steve travelled up and down a number of times, dragging short rails hither and long rails thither.

'Bert Ferrule' is catching this on his camera, check it out on Nigel's Flickr site too:

We made a big dent in this pile of new sleepers today, which is good news. Progress is still on schedule. 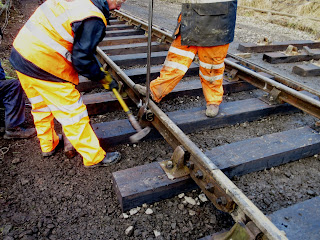 A sub-gang followed up with keying and fishplating. It's tricky getting those Mills keys in, they are very elastic and often jump out to bury themselves in your shins. Ouch !

In the foreground is an insulated joint; this is the furthest the locomotive may travel on the platform road in future, unless given permission to do so. 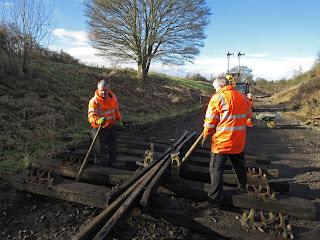 With the two platform roads now extended by two panels each, it was time to think about putting the crossing in its place. Here it is being jacked up to release those timbers that have been noted for replacement. 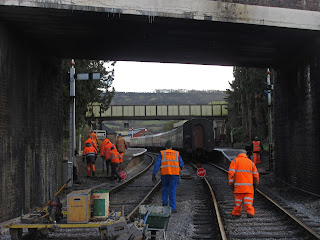 By common accord it was suddenly lunchtime, and there was a fast walk, not quite a run, towards the mess coach and the long expected Christmas dinner. 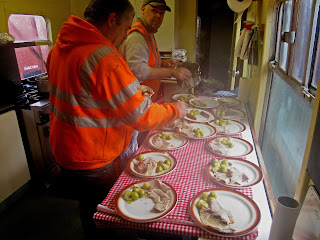 The kitchen was hot and humming with activity. The timing was perfect; we arrived just as the plates we being filled for the 16 participants. 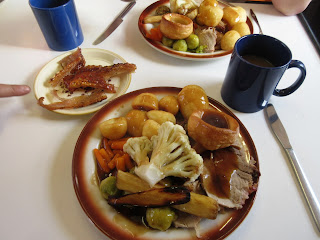 How's this for a tempting meal:

Crackling to one side, a mug of hot tea, and a pint pot of gravy between two tables.

When you had downed all that, there was an additional surprise: 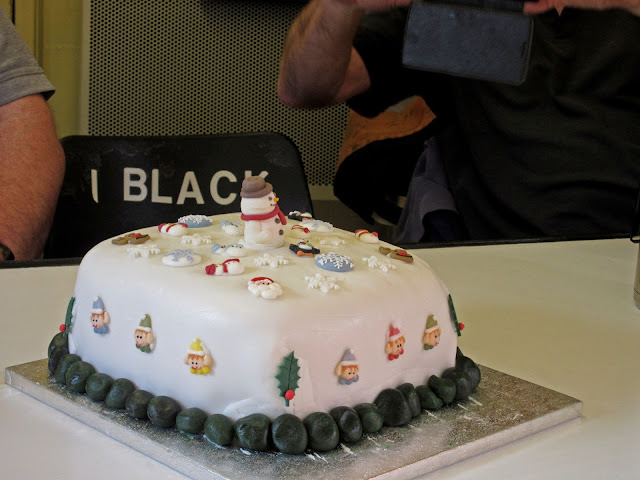 Mrs. B's amazing Christmas cake! The marzipan was at least an inch thick all round, and the whole construction was surrounded by a string of green marzipan balls ('have you got green balls?') 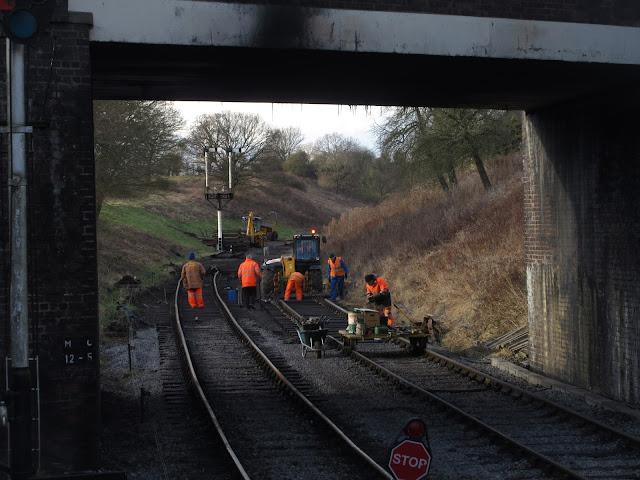 Although the pundits had it that there was unlikely to be any work possible after the Christmas dinner, we did manage it too. We laid another panel in, and attached the crossing to the down line. 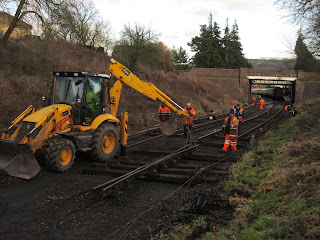 Our relaid trackwork from platform 1 now reaches the designated future place for the crossing, so late in the day Steve was able to nudge and drag it up to the plain track just laid. 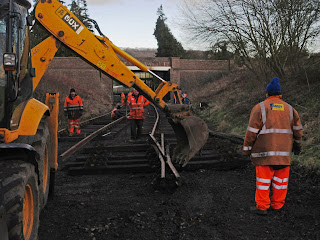 Having pushed it northwards 5 or 6 feet from its previous parking place to one side, Steve then nudged it sideways, so that the crossing lined up with the plain line. This was then quickly fishplated up, and the up line crowbarred into position - or almost - ready for cutting to size next time. 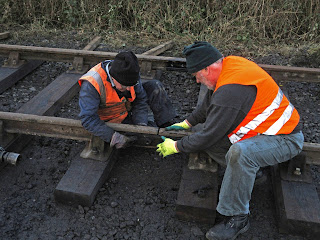 This was the dirtiest job of the day - fitting the fishplates, after first smearing black grease around the rail in question.

All the grease was used up at the end of the day, so they must have put on a lot of fishplates - well done ! 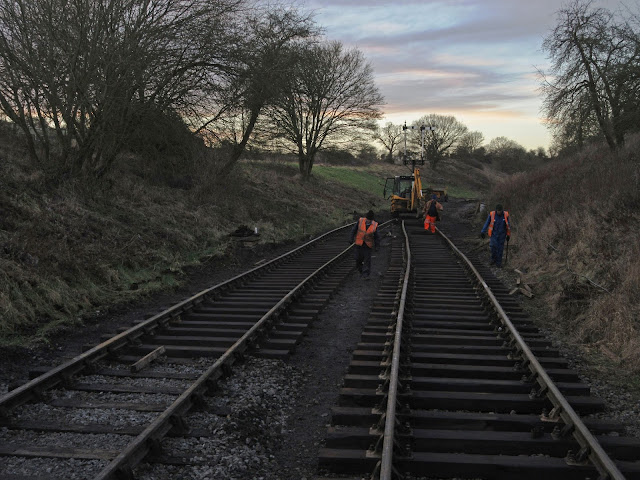 The closing shot at the end of the day, the cutting already in the shadows and the setting sun reflected in the gathering clouds above, shows the great progress made today. The extended loop is now in place, and the crossing of the repositioned turnout bolted on to the end of it.

The welders will be with us on Wednesday, to join the rails up again at Bishop's Cleeve, and at Winchcombe to weld every other joint in the section leding to the tunnel.
Posted by Jo at 19:44