An excellent turnout for the Wednesday gang today, supplemented by 8 volunteers from Network Rail at Saltley (and other locations), who were made most welcome. 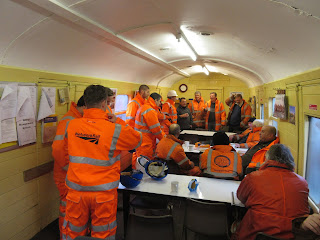 They got a briefing for the day and a cup of tea to start. We then split into 4 teams again, with the following activities:

1. Welding and reclipping the track at Bishop's Cleeve. The welding and stressing here is completed; the track clipping needs finishing off but is nearly done.
2. Welding a gap at Laverton, and reclipping. This was followed by a small ballast drop there.
3. Sorting new sleepers in Winchcombe yard, and taking these out up the cutting.
4. Track laying in the cutting.

Haigh Rail were also busy welding by the tunnel, working towards Winchcombe station, doing every other joint. 10 welds were done here, a good effort for the day. 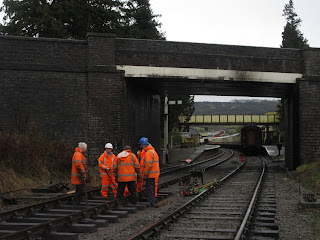 Each team had a handful of NR volunteers, and here we see a gang clipping up the track laid on saturday.

Some of the NR people were office workers, but others were clearly familiar with the pan keys, which they drove in most forcefully, and precisely. Respect! 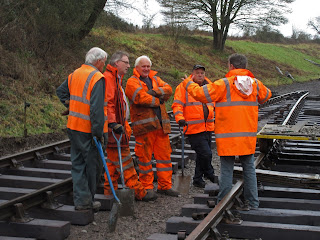 Lee gave a quick briefing to a team shovelling a basic layer of ballast under some floating sleepers.
He seems to be a successful fisherman too. 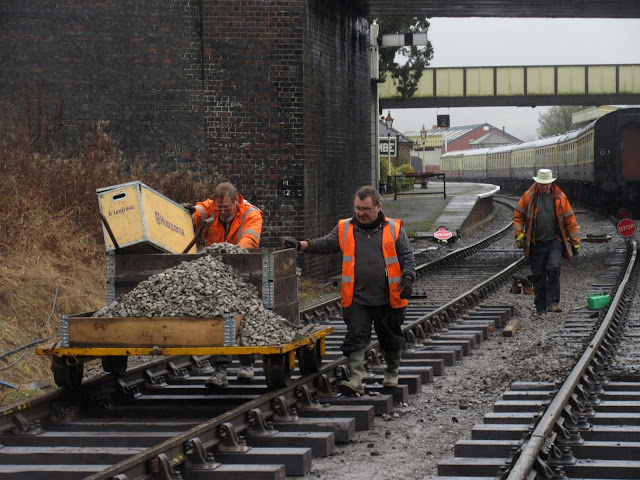 The localised ballast support was brought in by PWay trolley, here with Stevie in unusual pose, caught outside of his trusty JCB. With all the different jobs going on at once, a lot of tools had to be taken out and here is the rail saw going out to cut the ends off the next pair of rails we put in today. 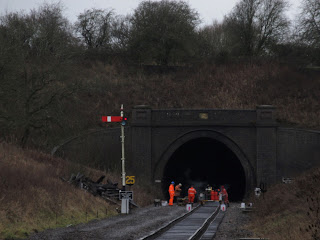 One of the three Haigh Rail teams started welding from the tunnel end of the work site, and slowly made their way north. 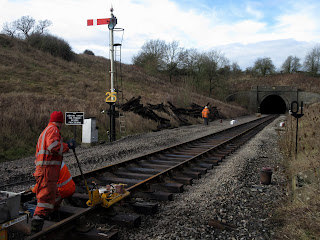 Here is the fifth weld they put in today. The combustion process has been completed and the excess material is being cut off with a hydraulic ram.

A colleague is already preparing the next weld on the other side. 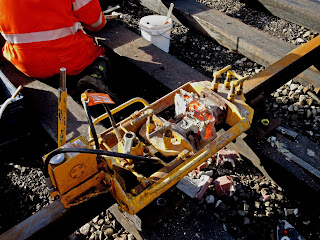 The excess material being cut off by the ram is still red hot (centre right), necessary so that it is still pliable enough to be pushed off.

The joint is later finished off with a grinder to make it smooth. 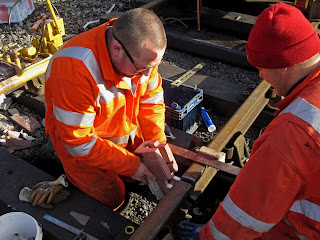 Here the sixth weld is being prepped. The two rail ends are moved with small wedges so that they are exactly opposite each other.

Then a clay mould is fitted around the rails, with the joints sealed tight except for the top, where the molten metal is allowed to flow in.

These two referred to themselves as Grumpy and Happy, and made a perfect team. Yin and Yang. 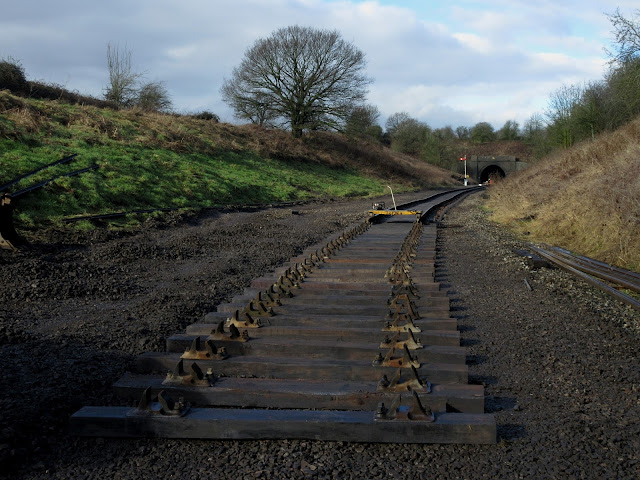 Another small team used the remaining new sleepers in the pile by the bracket signal to extend the relaid track by another length. This is the result, just before the sleepers were aligned, and the rail dropped in.
There will be another spent ballast removal excercise tomorrow, and space is now getting short for manoeuvering, as the two rail ends edge closer to each other. Quite possibly we may be able to join them up on Saturday, we shall see. 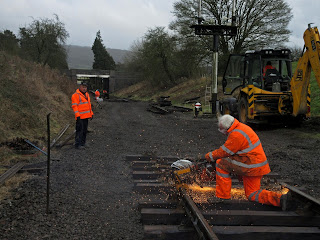 Once the two rails were in their beds the saw was brought up and the crippled ends cut off. Peter did this quickly and efficiently, also leaving his trouser bottoms intact, another plus point. 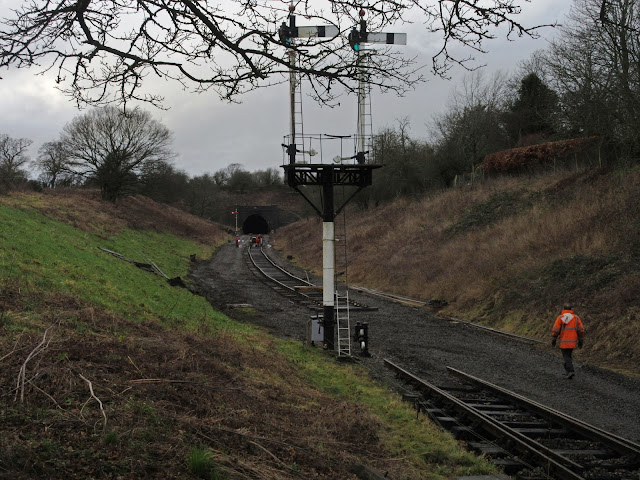 Towards the end of the day the extra panel was in, drilled and cut to size. A short area beyond the signal remains for the JCB and dumper to cross over. Not for long though. Two panels, perhaps three, and the switch from the turnout still remain to be fitted. After tweaking, we can then run a ballast drop over it.

Also towards the end of the day, the sleeper loading team from the yard pushed out a trolley loaded with 16 new sleepers. 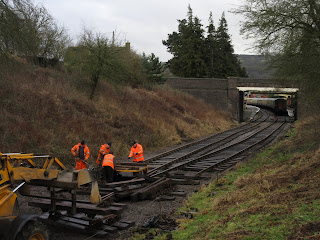 The sleepers brought up were then collected and stacked by Stevie. The extended loop is particularly evident in this shot. Timbers for the turnout are also on site, so maybe, maybe, we can put it all together and close the gap on Saturday?

At the end of the day, our friends from Network Rail confessed that they had indeed enjoyed themselves, and we were certainly most grateful for their contribution, not only in terms of physical work but also for the social interaction and contacts made. Thank you, and come again !

Haigh Rail too have been steadily plugging away at the many joints that we have left for them, which is a huge contribution and which will save us much trouble from dropped joints in the future. They will be back too, perhaps as early as tomorrow, weather permitting.