Snow, and a milestone

Pretty grim weather today - zero degrees on arrival, which painfully climbed to one degree during the day. There was even snow on the ground at Winchcombe today, and up the cutting where a gang of 14 set to work. 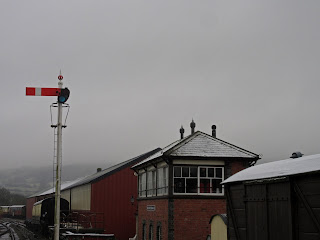 Winchcombe signal box had a white roof, and the Cotswolds behind were covered in mist, with patches of white. Very seasonal ! 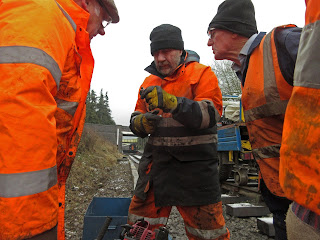 Ever had problems starting your car in the cold? Well, it's the same with the motorised sleeper drills and nut runners (A.k.a 'Animals')

This one wouldn't start at all. Steve has got the sparkplug out; the others are peering anxiously to see if it is wet or not. That will give you a hint to what is wrong. 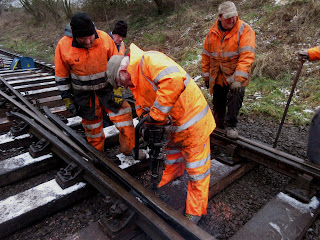 Finally we got one going, and here is Mike with the drilling gang, drilling holes in the replaced timbers to tie down the whole thing nice and tight (and preferrably to gauge too) 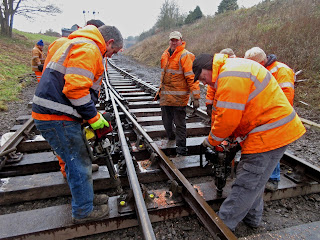 As these machines are heavy, there is a change of operator at intervals, and here it's Paul's turn on the drill, while Neil waits to follow up with the nut runner to secure the bolts. 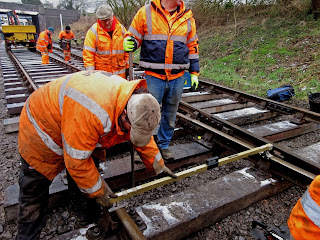 Just before drilling the final holes, a check is made that the whole thing is true to gauge. Measure twice, cut once - the old adage is still true. 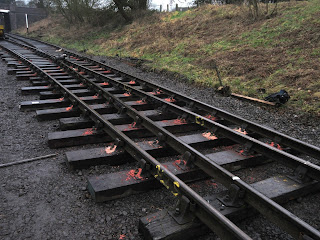 By the end of the day (and we are talking nearly 5pm now, since the evenings are getting longer) the drilling team had done every one of the holes on the turnout, perhaps as many as 200 holes drilled.

Here is a section of the turnout, with the yellow and orange colours denoting the shavings from holes drilled in different kinds of wooden sleeper. 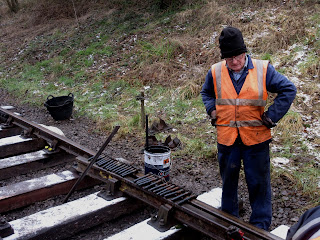 We all do what we can within our abilities, and here is John, older than most of us but still very game, with a whole bunch of chairs screws greased up and ready to go. 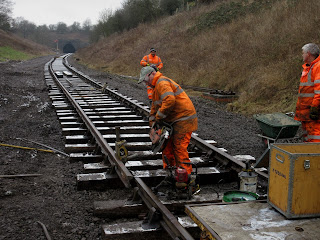 Today we also put in the last rail, which Andy has just cut to size. The whole relay section can now be traversed by a PWay trolley, or indeed the Landie. 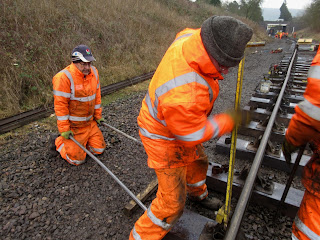 A second team split off and completed the keying up of the straight between the tunnel mouth and the bracket signal. Although quite a few keys had already been inserted, the welding team had to free up 3 chairs each side of a weld in order to level up the two rail ends to be welded together. These all had to be put back, and usually the holes under the chairs no longer lined up, meaning lifting and fiddling with the holes and the chair screws.
As we were only a small team, it was sometimes the case of one person in charge of two lifting bars. We can handle that. 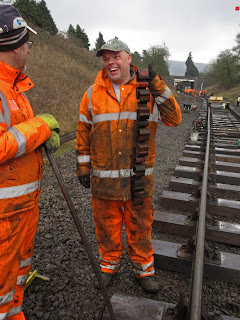 You can always learn something in the PWay game, there are many tricks and neat solutions.

How do you move a whole pile of Pan keys without a wheelbarrow?

Andy shows us how - make a daisy chain of them. OK, OK, no need to look so smug. 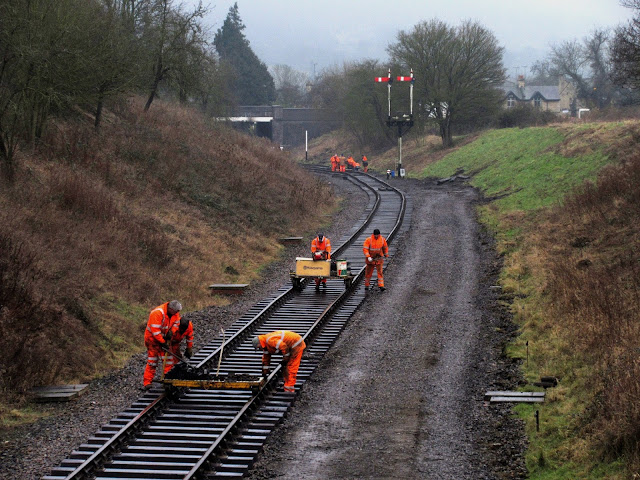 The keying up team moves slowly up the line towards the tunnel mouth. In the backround the bolting down team spent nearly the whole day on the turnout.
The track still needs a bit of 'tweaking', but we are getting nearer the day we can let a ballast train drop a load in here. 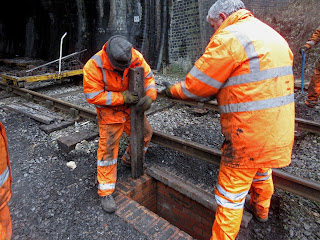 By the tunnel mouth a catch pit issue still had to be resolved. It is in the 'six foot' i.e. the centre of the track, but the running line is not in its historical place, being a foot or so nearer the centre.

This means that the previously covered catch pit, opened and cleaned, has had to be covered again. Moving the running line back to where it should be is a huge job, and would also require the purchase of quite a bit of additional ballast to gain extra height required. 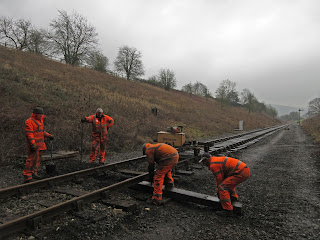 As the three sleepers involved had to rest on something, we reinstated the original arrangement where they rested on ballast supported by 5 rail cut offs. At least we can run trains again now. 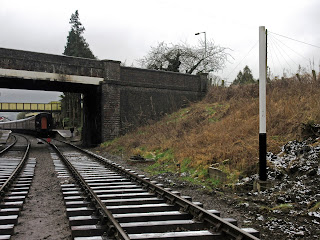 Back at the Winchcombe end, two new signal posts have been planted, to allow for the longer platform and loops that we have created. 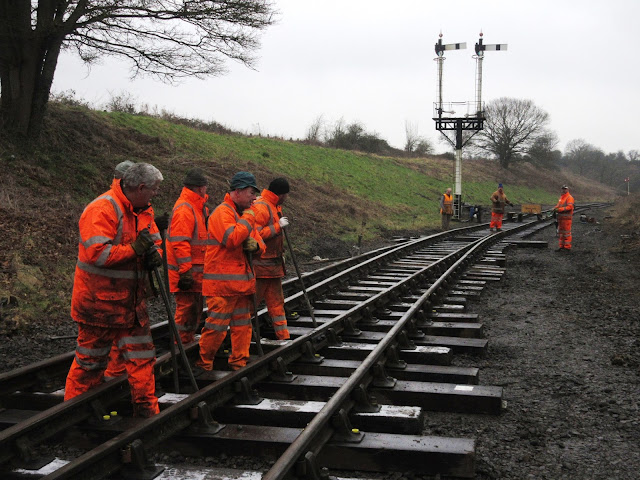 With the turnout finally bolted down, it was time to 'tweak' it and correct the curve that goes through it. With the JCB now 'on holiday' we had to resort to the time honoured manual way, i.e. men on bars.

Nigel has stepped way back and is eyeing up one of the running rails, before giving instructions to heave the heavy pointwork over by an inch this way or that. Of course the final adjustment will be done by the tamper when it returns at the end of the month. 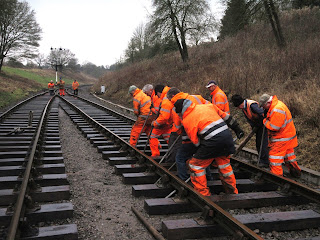 A short while later the team addressed the loop line, which had a curve in it that was rather too generous. This bit was rather easier, esp with more people on bars to help. In fact we actually overshot at one point, and had to tweak it back the other way. 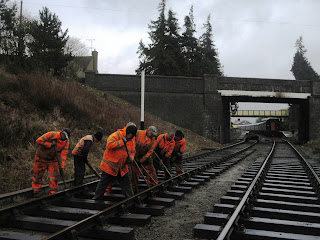 Our last picture shows the gang, in the failing light, barring the loop line as it comes off the platform. A bit more work is needed here, but we can't work in the dark so will need to do this next time.

The milestone mentioned in the title is that we have reached a MILLION !

A million pounds on the share appeal, thanks to your great and hugely appreciated support. We have £250.000 still to find, but after crossing the million mark, the end really looks achievable now. Remember that £1.25m is only for the minimum to get us to Broadway, so do help us get there in fine style. 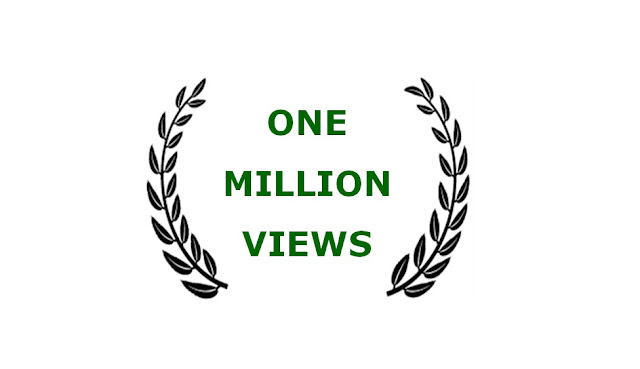 Another, more modest milestone is that this family of blogs has been blessed with a MILLION page views. The interest you have shown in our activities shows that we must be doing something right. We do hope, as the blogs are free and we have not yielded to the temptation to allow ads on them, that sometimes you will reach for your chequebook and reward us with a share purchase or gift to the trust.

So where have you clicked the most? Here is a little summary of your interest shown, over the lifetime to date, in each of the blogs in this group:


You did it, dear reader, so give yourself a richly deserved pat on the back. And thank you for supporting the GWR, see you again shortly with the next post.