A day of three movements today, in a musical theme:

Prelude
Work on ballasting the extension has resumed! Great news. Kick-off at 08.30 this morning in the Broadway lower car park, for a day of ballast dumpering. 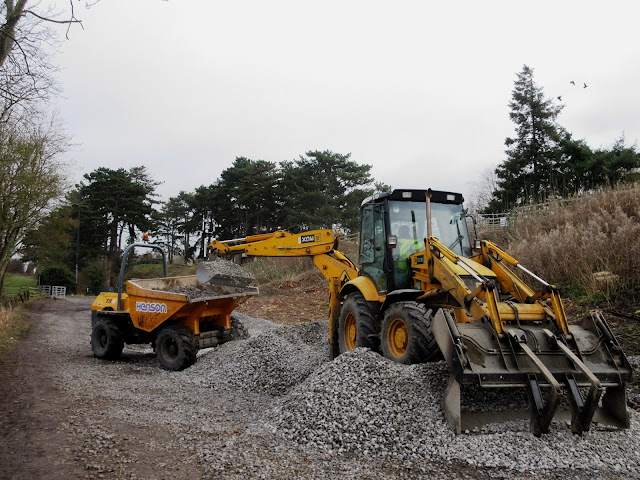 Stevie back from holiday, a dumper hired in, ballast ordered and coming in fast - we are go ! 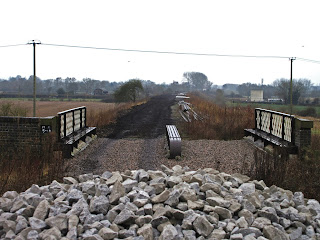 If you've been paying attention at the back there, you'll remember that we left the 'head of ballast' about 200 yds short of the Childswickham Road bridge just before Christmas.

On a drizzley morning, this was the view first thing. No ballast bed visible yet, looking south from the Childswickham Road bridge. Ex Laverton FB rail is stacked on the right, ready to be dragged through Broadway to make a start of the northern headshunt and surrounding pointwork. 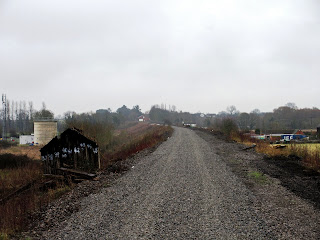 In the previous two months, despite the Winchcombe relay, Steve has had the time to grade all the ballast piles we left for him on the Terram.

It looks so good, that, seen looking north near the old PWay hut,  you'd think that we were already there. This bit is just about ready for track laying.

However, our first 6 drops were at Peasebrook, where some dips round the bridge needed sorting. 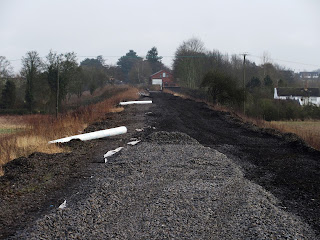 This in fact is the 'head of ballast', half way between Pry Lane  and Childswickham Road bridges. It was out of sight in the previous picture, so we are not there yet.
New rolls of Terram have been positionedt, ready to roll out. Each one gives you 100m. 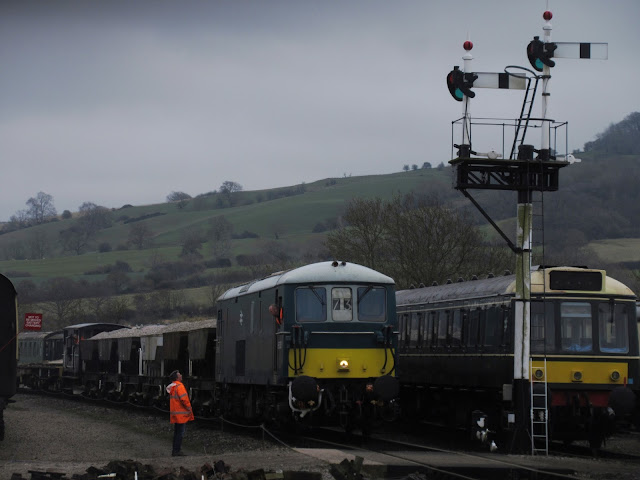 We finished dropping at Peasebrook and started on extending the head of ballast, when a call came to assist with a ballast dropping train at Winchcombe. This gave Steve the chance to sort out the two dips at Peasebrook, while the drop at Winchcombe was executed.
Here is the PWay ballast train, with 6 brimming Dogfish, awaiting its operators at Winchcombe. Lee and Neil discuss how the drop will take place. 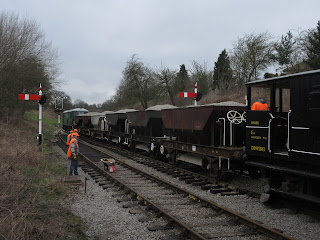 After dropping off two bogie flats destined for sleeper loading, the ballast train is moved up to the south end of platform 2, and the last Dogfish placed precisely, so that only the voids are filled when we set off, doors open.

Very undesirable is any ballast dropping into the pointwork, which has already been ballasted by hand.

How far will the one wagonload go? 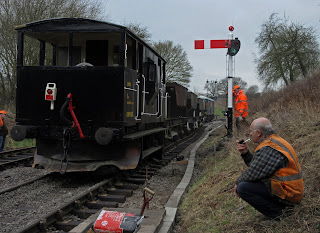 With its sweeping tyre in place under the plough, the grinding and screetching train slowly sets off towards the turnout, watched by a philosophical member of the S&T gang, which is connecting up the two new starter signals. 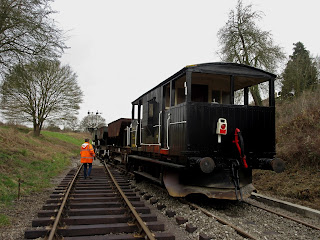 Right on cue at the end of the panel of plain track, the wagon we opened runs out. Phew! The Shark has followed on behind and levelled/spread the ballast further out. The void is quite deep here. 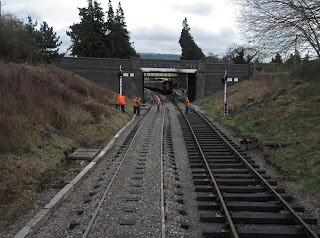 Here is the drop just effected, seen from the balcony of the Shark. Doesn't it look neat? On the right is the platform 1 road, where a second wagon load will be discharged over a similar length. A Jacker/Packer will then make a first pass to effect a basic tamping excercise, before the 07 tamper returns at the end of the month. 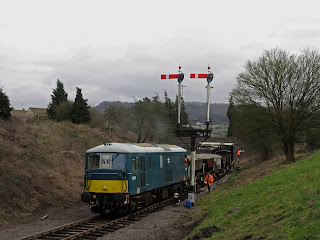 After ballasting the platfom 1 road as well, the train gets into position to start on the plain track south of the repositioned turnout.

The plough is wound up and down numerous times (ouch!) as it needs to be up to pass over the turnout, and down to do its work during a ballast drop. 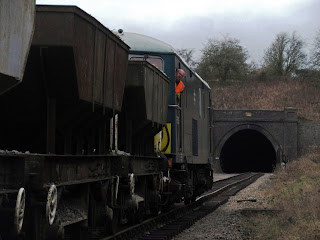 Finally, the last 4 wagons were discharged along the plain line, one by one, leading up to the tunnel. More ballast is needed here, 6 wagons was not enough. They will be refilled tomorrow morning, for a second drop tomorrow afternoon.

Ballasting dropping at Winchcombe completed, it was time to get back to Broadway and continue with Stevie. The idea was to get rid of all the ballast supplied early this morning, so that more deliveries can be made tomorrow. 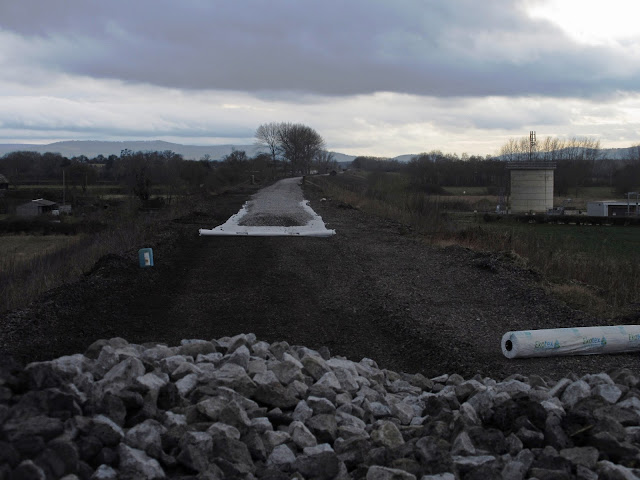 A final load at the end of daylight finds this scene near the sewage farm. The first roll of Terram is coming to its end (100m used then) and the next one has already been positioned, ready for use.

The blue drum is a critical part of the process. After leaving Pry Lane bridge in the middle distance, we need to change sides with the track in order to enter the former station confines on the down side. While rolling out the Terram yard by yard, we aim for the blue drum, which marks the point where the edge of the Terram will have reachd the other side. As you can see, we are nearly at that point. From there onwards, it is about another 150 yards to Childswickham Road bridge, which is our target for this week. We should be working here most if not all days for the rest of the week.