Today was Doris day.  60mph winds were forecast for Broadway, for 3 hours around noon. What would that mean to us, could we work, could we venture out on to the tall embankment at Childswickham? 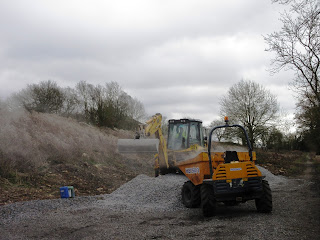 Dust was the first thing we noticed, it blew at right angles out of the dumper, each time a bucket full of ballast was dropped in it. At the end of the day, the adjacent embankment was all white with the stuff. Tricky to park you car too, avoiding any tress and the debris they generate (or maybe even a whole tree!) 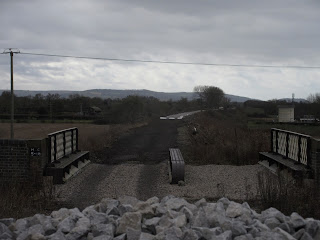 Here's the opening shot of the day. A load is just going over Childswickham Road bridge, its mission: to reach the 'head of ballast', now not so far way in the distance.

This picture does not tell you the strength of the wind though. Emerging over the bridge onto the tall embankment, there was a fierce blow from right to left, causing some worried glances at the field far below. It is a long way down. We got there OK though, the issue was more a personal one, because as soon as we got off to rearrange the Terram, it tried to blow you over. Doris even ripped at my glasses at one point, but it was a fun challenge. The tricky bit was to roll out the Terram and keep it in place. Eventually a shovel borrowed from Steve did the trick. Roll it out for a yard, throw a shovel full of ballast on the windy side. It only had to stay in place until the 6 tons of ballast had been dropped on to it, the wind couldn't shift that! 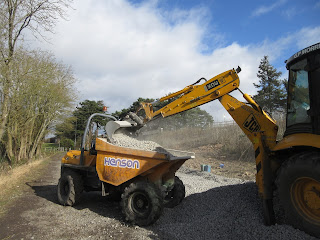 More billowing down below in the car park, but in the afternoon the sun came out, which made things a bit more friendly, but it was still like driving through a sandstorm.

In fact we never saw any rain today, what a strange storm. Powerful, but dry. For us, anyway. 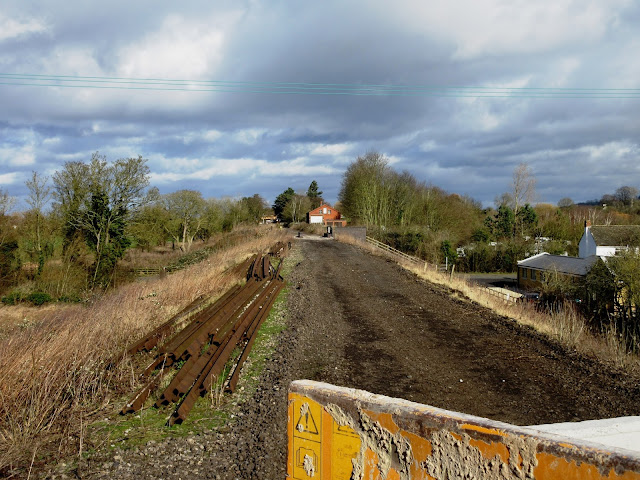 The sun came out and allowed some pretty photographs, like this one. But the clouds continued to skid across the sky above.
This picture was taken while turning the dumper, so you can see that the proximity of the ex Laverton Loop rail is starting to interfere with that manoeuvre. But that's good news, isn't it? 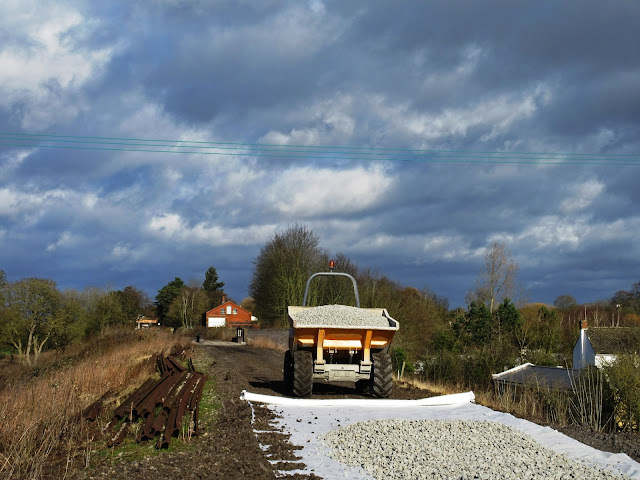 Despite Doris, we had a fine day, allowing for the traditional dumper puncture first thing in the morning. A van soon came and mended it - a screw was found in the tyre.
Notice in the picture the row of dark little piles on the left. This is how we kept the Terram down. No rows on the right, that's the lee side, nothing required here. 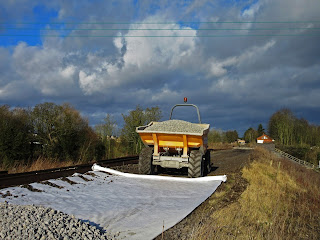 Initially we were only going to ballast up to the rail, but now we've been asked to go all the way up to the bridge, so that's probably another day's work. The next roll of Terram is also almost used up again - that's another 100yds done.
This is one of the last loads of the day. We are now next to the rail from Laverton, another milestone to which we have been looking forward. 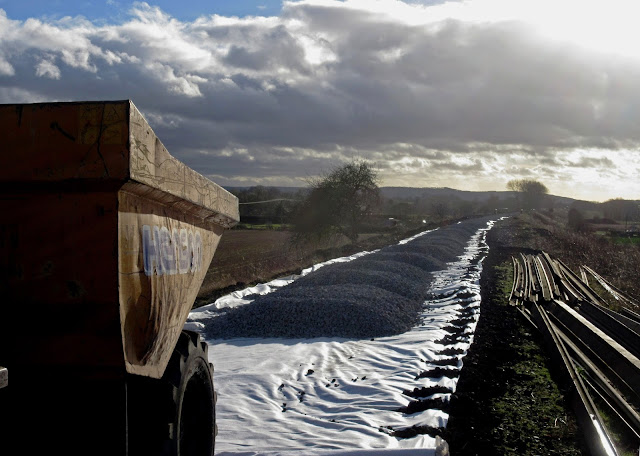 After the final load today, one last look at the worksite. It's straight into the setting sun, so it's a bit black & white. The rail is stacked in 4 piles, one behind the other, and we have started tipping next to the second pile.

Tomorrow we should complete up to the bridge. Then we have to go back over what we have already laid and tip additional loads here and there where the levelling by Steve in the JCB has revealed low spots. We'd rather tip a bit less than a bit more intially, as ballast is expensive and we don't want to waste it. It needs to be just thick enough for the tamper tynes not to reach through to the Terram from above.

Once this job is finished, we shall leapfrog the goods shed area (subject to forthcoming embankment works) and go to Springfield Lane, where a large trackbed area needs raising before the first yards of track can be laid on it. All this will need dumpering in, so will it be 'Dusty' Springfield?