Today was our last chance to use the mechanical means of the JCB before Stevie, its operator, goes on a long deserved holiday. This meant that we needed to move everything that is heavy, leaving the detail work such as clipping up or bolting down for another day - the priority was to use the JCB.

There were three teams today:

1. The main team was on the relay at Winchcombe
2. A smaller team of 4 went to Bishop's Cleeve to clip up the welded rails, and
3. An even smaller team went out on the ballast regulator up the extension to sweep the track.

As the yard also needed a bit of sorting out, i.a. to load more second hand sleepers to finish off the last couple of panels, the Telehandler needed to be started.

Steve explained some of the finer points of Telehandler starting. It seems the farmer versions can reverse the radiator cooling circuit flow, resulting in a blowback of accumulated harvest remains. But not ours, we are safe. 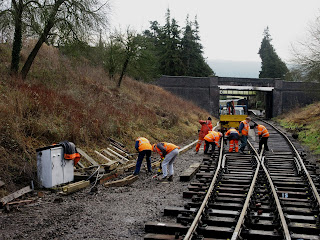 We started the day with some stretching excercises called 'keying up'. They certainly made us warm. The turnout was complete but not yet keyed up or bolted down. Our job was to put all the keys in.

During our absence, S&T had pounced on the site and quickly laid a new trough to a location cupboard. We were warned that the nice straight route had been photographed, and that any disturbances would be reprimanded. Oh-oh. 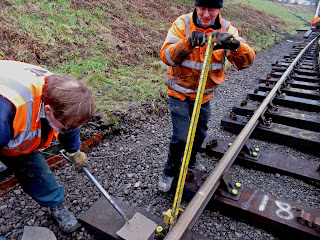 We have experience in keying up, but normally the chairs are bolted down. Today, they weren't. What is the recommended way to lift them in that case? We used a shovel. Probably not in the book, but it worked. Peter is ready to go on the Pan Puller. Or pusher. Or whatever. 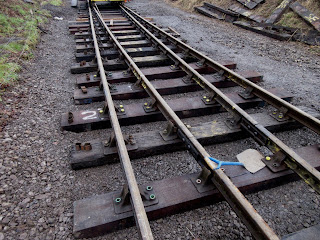 Casting our eyes forward over the chairs still to be keyed up, we found this. Can you see what is wrong?

The chair beyond the shovel handle has one hole on the left, the next three two. That can't be right?

Those opposite too... looks like one chair was put on back to front, and the others followed on from there. Probably done to test our wakefulness, but we spotted that one! 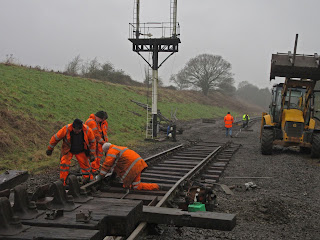 Beyond the keying up team a gang was putting in the next panel, south of the turnout toe. This length of rail had been shortened a bit, in order to allow for an insulated joint just before the bracket signal.

A mist was starting to form now, at its worst, it almost obscured the tunnel mouth. Cold, it was. 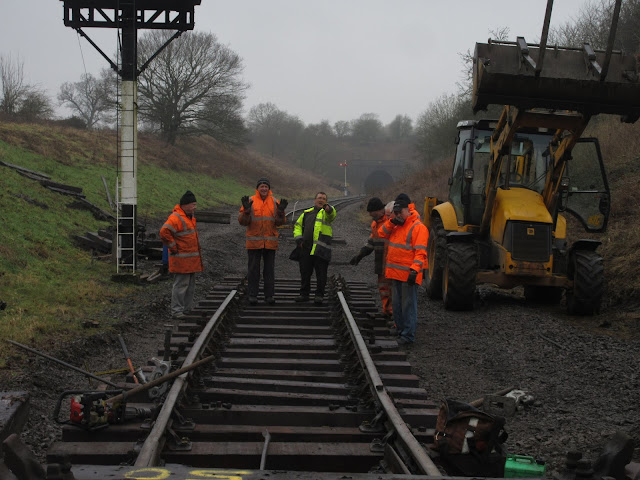 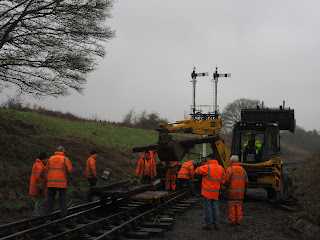 Next to panel laying, we also had to use the power of the JCB to remove left over materials from the relay, and in particular the life expired timbers from the turnout, which are very heavy.

Steve collected these from the cutting side, and scooped them up into the bucket for removal to the yard by trolley.

We take our litter home with us you know. 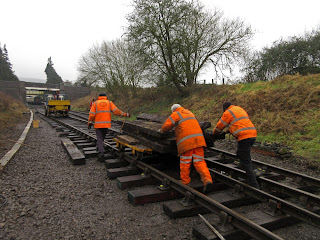 A 'dead sleeper' train trundles north towards the yard, heavily laden with long timbers recently replaced in the turnout. 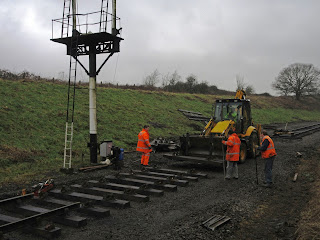 Having tidied up the site, we continued laying in the sleepers for the last panel. This needed some careful tactical thinking, because when all was said and done, Steve and the JCB had to end up on the far side of the track, with everything for the closure to be within reach. 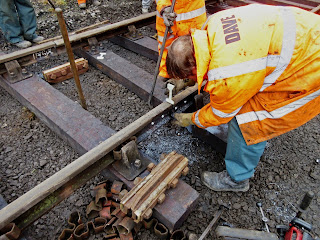 In the foreground of the previous picture will be an insulated joint.

There was a question about this in a previous comment, so here is a bit more detail.

Dave has just drilled the new holes for the fishplate, and can be seen here fitting a plastic insert between the rails to stop the current flowing from one rail to another. The new IBJ fishplate is in the foreground. 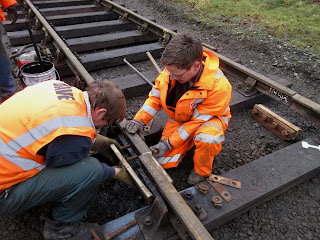 Peter has fitted his side, and here Dave is fitting the second fishplate.

Aha, I hear you say, it's all very well insulating the rails between each other, but can't the current flow through the fishplates and bolts?

That has obviously been thought about, so each fishplate gets it own jacket of plastic, and the bolts are insulated by means of the little bits by Peter's knee. If it all works OK. Of course it wouldn't bolt up, gave us terrible trouble, these two did. 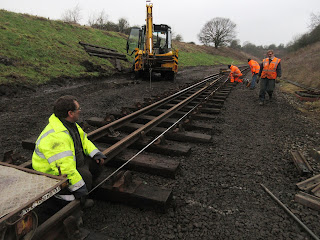 Meanwhile, back on the panel team, Steve and Martin were measuring up the last length of rail required. Measure twice.... 'I measured it once, I'll measure it again afterwards', said a voice. Comedian. But after checking with Nigel by phone, we cut it just right. Phew. 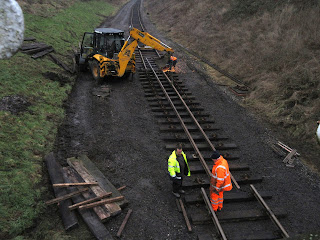 Here's another view from the bracket signal above. The last length is just going in, and the first rail is just being cut with a shower of sparks. 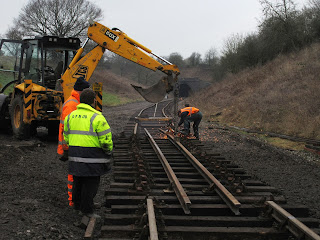 From ground level it looks almost finished. In fact, we did not cut the last length, due to the failing light. Steve will do this on his last day, tomorrow. 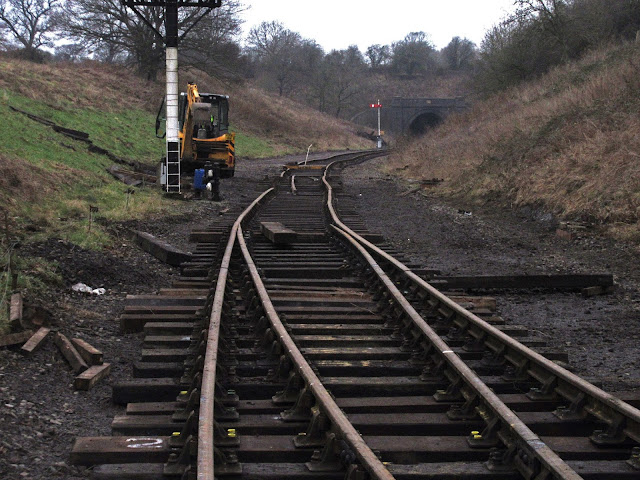 This is the last shot of the day. The last panel is in, it just needs the final length of rail inserting. The track then needs 'tweaking', to get the curve nice and gradual.

Team two at Bishops Cleeve set out to clip up two dozen sleepers, a two hour job, max. It took all day. Things always take longer than you think in this business. It turns out that a number of pads from under the rails were missing, and as you have to guess which tools you need for the job before you set out in the Landie, that requirement hadn't been anticipated. So back home, get jacks, pads, more bars.

Team three at Laverton on the regulator did not so well, then very well indeed. At first the machine, out of use for quite a while with missing brushes, burst a hydraulic hose and the job came to a halt. However, we knew of a hydraulic specialist in Tewkesbury and shortly after that, the machine was repaired and did a brilliant job! It even did more than was expected today, so everyone was very satisfied. It will be out again tomorrow on a slightly different section of line, but the extension has been duly swept!