Three of us on moving ballast and other stuff around today, and an 8 man crew from the station at work - we intermingled a bit here. Not unusual, we are now working on the same site. 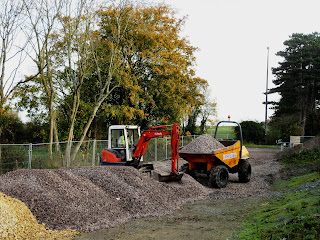 Those nasty men from the quarry dumped a load more ballast on us when our back was turned, so we started the day by loading up these piles and taking them to the platforms, with the exception of one load.

This last one was taken down to the road crossing near Pry Lane bridge, to fill in the 4 foot and make that crossing more useable for the Landie, Telehandler etc and those vehicles that buzz up and down the track. 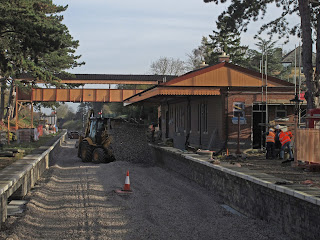 We dumped all the rest in between the platforms. At the same time Steve was working on creating the exact levels that we need to lay track. Eventually he found that there was an excess at the northern end, and started taking it further down towards the middle in bucket loads.
At the same time the Broadway station gang were erecting a final lamp post, in the middle of the access gap that used to be there. 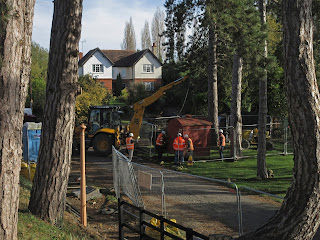 After some pleading Steve was persuaded (with two slices of carrot cake, double his usual bribe) to lift the lamp hut away from the top of the drive where it had been used to supply stuff for the platform closure, and into the compound by the picnic area. 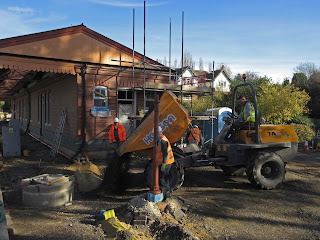 Adam, also at work on ballasting, was likewise bribed with carrot cake to bring up 24 tons of spent ballast, all of which was tipped around the new lamp post, so that it no longer stuck out.
It became apparent that this former access area needs a lot of infill. 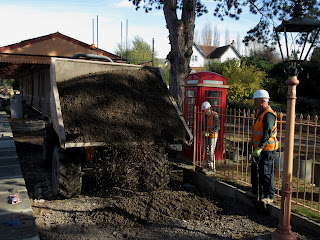 The 6 ton dumper even ventured on to the platform, and dropped the spent ballast while reversing, thus saving the chaps a lot of digging (we are not so young....) 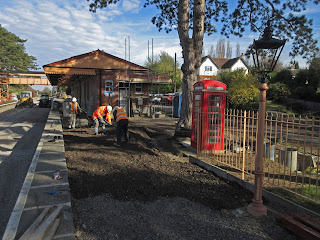 Well, some digging was still required, but a lot less than with a random dump.

This area is looking quite good now. A lot of it will be hidden by a much larger than before modesty screen (outside the kitchen, originally the toilet) and this is planned to receive large Grundon bins in it. 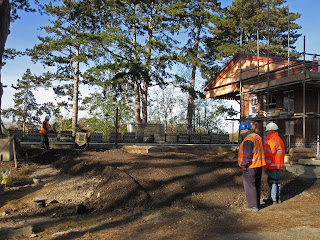 Finally the area was rolled once more. It will compress further during the winter. 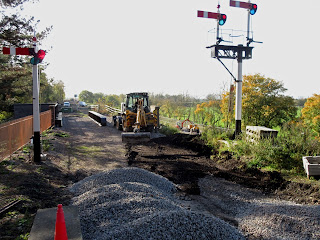 While out and about with the JCB, Steve gave the southern platform area a bit of an extra scraping, to make sure the barrow crossing will fit in, with ballast underneath it 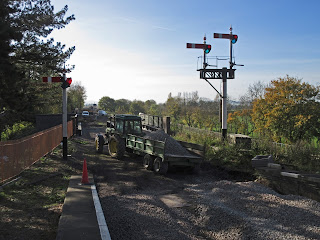 After a while Steve gave up on shuttling the ballast around with the JCB, so he took in the tractor and trailer and hauled trailerfuls of ballast from the middle of the platforms roads down to the south. 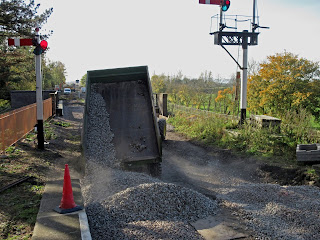 The trailer has a tipping function, so a big pile of ballast whooshed down on to the site of the future southern barrow crossing.
With this we have pretty much finished bringing ballast into the platforms, and soon we will be looking to further extend the ballast bed northwards from Childswickham.


Before we can do that we have to address a wish to remove the bund in this picture: 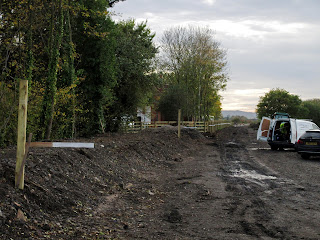 Although this bund has been here since the station's demolition in November 1963 it was felt to be too heavy for the embankment and we were asked to remove it. We got about half way along it today.

Due to the heavy cost of the Broadway extension, the knife has to go deep and savings have to be made where the public won't notice them. 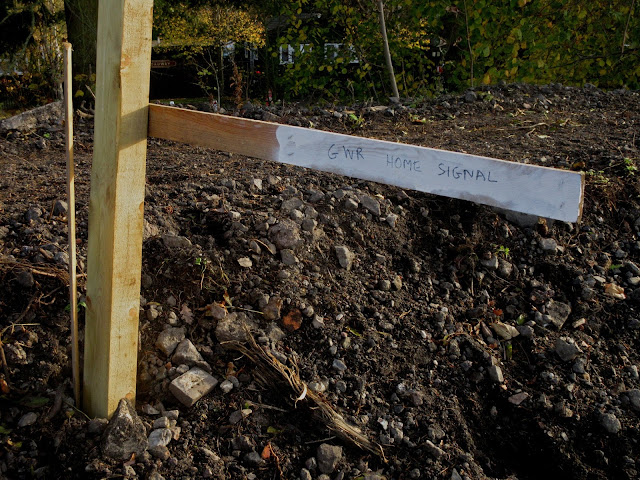 Will our passengers be intelligent enough to notice that this is not a genuine GWR article?

Secondly, the high cost of loco hire fees has caused us to look elsewhere for motive power for the opening train. 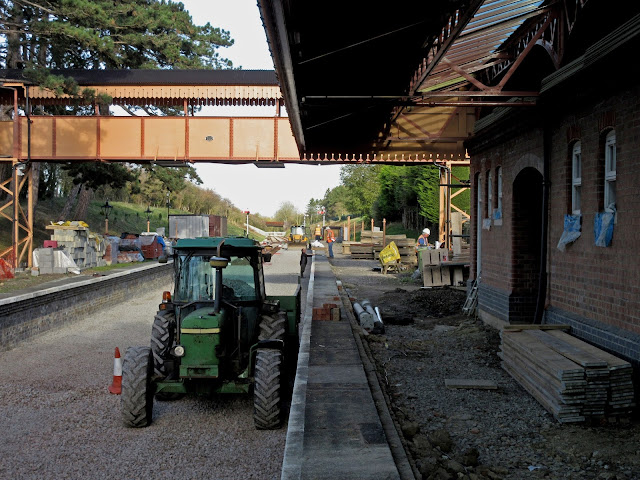 In a test run today, this tractor train pulled in to Broadway station, platform 1. Many tourist destinations already have such tractor trains, so it is felt there is already general acceptance, and few people will notice the difference anyway. All they want to do is buy a ticket and go for a ride. We did hear some mutterings from the heritage fraternity about the Southern green livery, which we may have to review in due course. 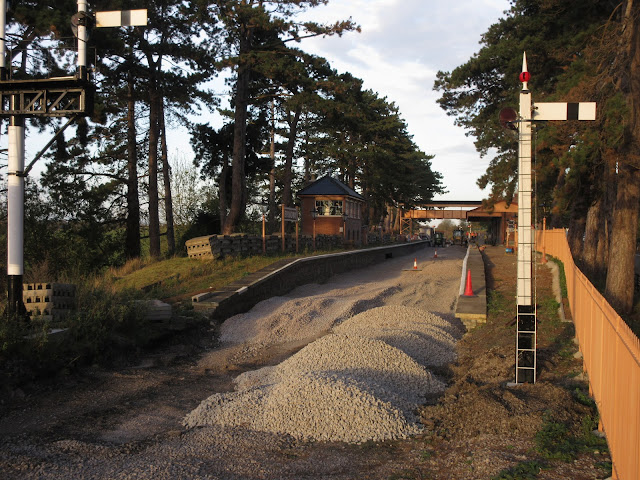 Humour aside (you did realise that was a spoof, didn't you? Didn't you?) here is the close of the day shot for the ballast runs. This is the area of the southern barrow crossing, and the three dumps in the foreground, now almost at the bridge, are from further up between the platforms. Generally speaking Steve declared himself happy with the levels passed fit today, so we should be able to lay more track on Saturday.

As you can see in this picture, the sun is going down - the temperature suddenly dropped like a stone - and we took a couple of additional atmospheric shots to complete today's posting. 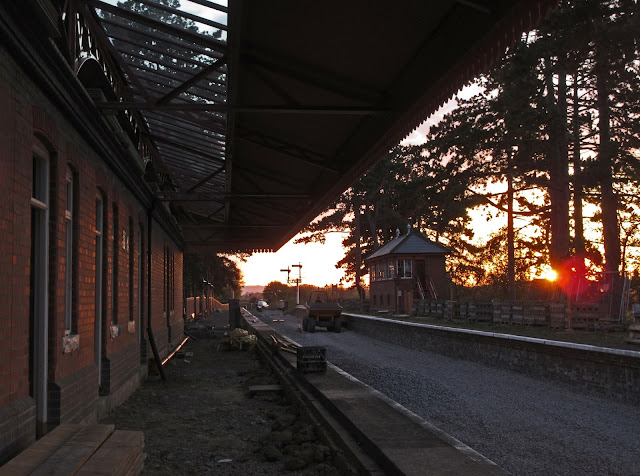 Steve has one last run with the dumper by himself, all the others having gone home a few minutes earlier. He is that motivated, isn't that great? 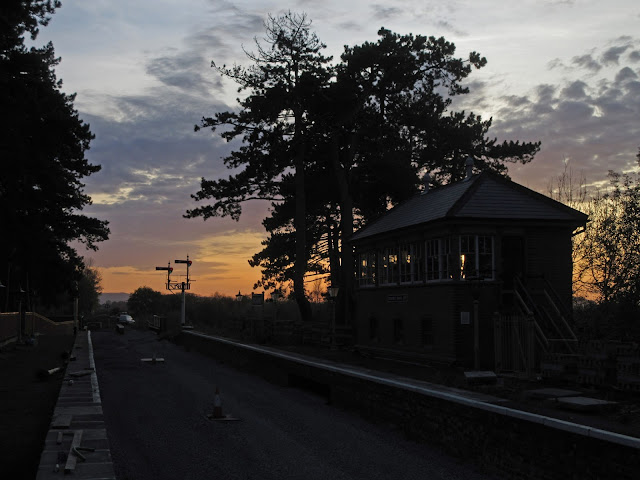 The orange winter sky can be seen through the signal box windows as the sun drops below the horizon. Night falls over Broadway.